It's about a very particular time, if you haven't already gathered.


First I'll explain the strange things that have occurred to me at that time and then I'll go into what I found when I looked deeper into the numbers.

Last year I received a phone call in which the only words spoken from the other end were "You're mine". This was slightly disconcerting to say the least, and the voice was strange, discernible as neither male nor female.
At the beginning of the call there was no sound, I thought this suspicious so I pressed 'record' on my phone, the icon turned red as it should when recording but upon checking my recordings there was no file present.
The time of the call and the number that called were also of immediate interest to me, as both encoded the number 666 quite straightforwardly.The time of the call was 16.56 (two sixes and the third six being the five and one added) which I noticed was the only minute out of 1440 in a day, to encode 666.

The telephone number itself also had three concurrent sixes within it.

With some trepidation I rang the number to speak to whoever it was... Invalid number. The telephone number doesn't exist, it just beeped and cut off.

So I analysed the number symbolically (omitting the zeroes as always) along with the time of the call:

I've had other 'coincidental' occurrences of this number in my life, the most striking one comes from the details on my ankle tag on the day I was born:

Late last year I was parked up in my car watching a star move slowly across the sky. I was keeping very still and observing it's relative position to the Parish Church tower, which was facing me diagonally so to speak. There are high-pointed cornerpieces on the crenellated tower which gave the impression of pointed ears. As the clock lights flicked on (at 16.56) the illusion of an immense staring owl was complete. It struck me as odd, not just the visual spectacle of an 80ft owl, but the fact it'd been caused by (of all things) a church at the only minute in the day that basically says 666.

I'm not going to go into how my real name equals the number of seconds in a day using my system of Gematria. It does, but that's just an interesting coincidence...

This can be simplified.


Drawing these on paper really does help in understanding the parallels.

The saying, "When the two make peace in this one house..." comes to mind.


The proportional split of a whole day at 16.56 into the symbolic durations of 127 and 53 led me to look at the numbers themselves.


Both are very prime numbers.

Here it gets interesting.


As a brief side note, in my system of Gematria I noticed mirror numbers of 1656.

If you want my key to the alphabet it is simply to multiply.

The commas are not accidental. Neither are the letters and numbers not marked by a comma. Neither are the lines that denote the masonic mark the vowels allude to in this symmetrically arranged alphabet. Neither is the value of the central column, nor its anagram, nor the word 'life'. Nor are the values of the ends of the rows. That's enough clues to its validity.


Going back to the phone call and what was said: "You're mine".

Well, I've only had one other experience of this phrase being 'said' to me, and that was during a Ouija board session, from a being whose name is Azazel.


I believe this all links in with a dream I had on 5th November 2016, I say dream, it was so vivid I'm not entirely convinced it was a dream at all. What I can only describe as a Divine human-goat (the feeling of reverence upon me as it approached was something I've never experienced quite so emphatically before) reached out to me and scored my forehead with a clawed finger. The sensation of being marked was similar to that of having a mole removed - there was no pain - just an intense pressure.

I didn't notice upon waking, but later in the day I saw a mark in the corresponding place on my forehead. It's not a big, vulgar symbol, and so quite easy to miss. Nine months on and it's still there, not having moved or changed in any way as far as I can tell.

Good for me? Bad for me?


Earlier this year I was gifted with a vision of a pregnant version of what I saw in my dream. I don't know whether I was the Divine human-goat Itself, the foetus, or the medium in which I was viewing it - it was all very much 'one' in its feeling, but I can still remember the feminine warmth I felt. It was glorious. It was Love


Now, I'd be lying if I said I've told you everything about everything that links into this. I can guess what some will be thinking though.. One thing I do know is that my mark is not the mark of a beast in any normal understanding of the word 'beast', rather it is the symbol of my higher self which combines both male and female aspects of being into one body.


I believe the Templars' name for their Sophia was Baphomet.

Thank you for reading. I promise I'm probably not the Antichrist

edit on Fri Sep 22 2017 by DontTreadOnMe because: data deleted per OP request

For me and others we stand at the time clock waiting for 1700 to hit.

If only I had that luxury (full-time carer).

Funny you should mention 17.00. Four minutes of fame isn't quite right though.

Should have also mentioned how 127 degrees Fahrenheit is symbolically very close to 53 degrees Celsius.

Some have more luck than others I guess.

originally posted by: thesaneone
a reply to: 1656hrs


For me and others we stand at the time clock waiting for 1700 to hit.

Yep. Get with it dude. You're an ATS member. Don't be a square

posted on Sep, 2 2017 @ 10:53 PM
link
Hes trying to get in and use you. Sometimes its invisible how these devils use us. It seems because your mathematicly connected. You need to defend your spirit. Foster good things. Dont be false. Be absolutely true. Call on wisdoms guiding hand .

originally posted by: Liquesence
a reply to: 1656hrs


I was trying to be light-hearted following some pretty heavy subject matter..

For anyone interested, if you draw the alphabet layout on paper, and connect the commas in the most childlike and straightforward way, an Eye of Horus symbol appears. Or a climbing/crawling figure depending what you see.

If anyone wants to do a Google search on the letters of the central column, Rex L, they might find an amusing cross-over connected to what I'm talking about. Devilishly comfortable I'd say...


originally posted by: knowledgehunter0986
Am I the only one confused as #?

If you think of any questions I'll be happy to answer them.

My face rarely cracks into a smile when I've only just got up, today is different having just read your words. Thank you

I did just that, and It marked me on the forehead with a symbol which is the conjunction of the letters A and Z. The closest symbol I can liken it to is an italicised Korean Won currency symbol ₩, or the Monopoly money symbol with a single strikethrough. I'm currently wrestling with uploading the pictures. 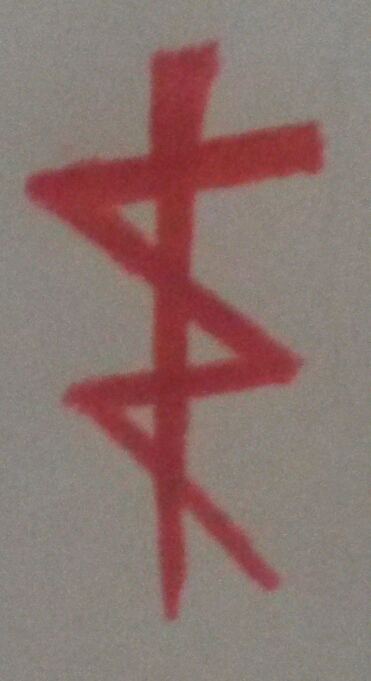