posted on May, 28 2017 @ 05:56 PM
link
My twitter feed shows up recent science news and an interesting article came up about a jawbone found in Greece and a tooth in Bulgaria. These may well be up to or over 7m years old and belong to a Hominid species Interesting maybe ?

Europe, not Africa, might have spawned the first members of the human evolutionary family around 7 million years ago, researchers say. Tooth characteristics of a chimpanzee-sized primate that once lived in southeastern Europe suggest that the primate, known as Graecopithecus, may have been a hominid, not an ape as many researchers assume. One tooth in particular, the second lower premolar, is telling. It features two partially fused roots, a trait characteristic of early hominids but not ancient apes, a team led by geoscientist Jochen Fuss of the University of Tübingen in Germany reports May 22 in PLOS ONE. Scientists suspect the first hominids appeared sometime between 8 million and 6 million years ago. New age estimates for previously discovered fossils position Graecopithecus as potentially the earliest known hominid, the investigators suggest. A Graecopithecus lower jaw, found in Athens with most teeth still in their sockets, dates to around 7.175 million years ago, a group led by Tübingen geoscientist Madelaine Böhme reports May 22 in a separate paper in PLOS ONE. An isolated Graecopithecus tooth from Bulgaria, an upper second premolar, dates to approximately 7.24 million years ago, the scientists say.


Rooted out This reconstruction of a right second premolar tooth, shown from two angles, is based on CT scans of a Graecopithecus jaw. Missing bottom parts of roots, in blue, were estimated by aligning mirror images of the roots of a better-preserved left second premolar tooth. Partial fusing of the two roots near where they split supports classifying Graecopithecus as an early hominid, researchers contend. 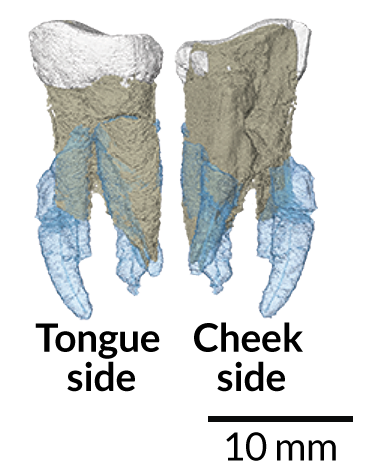 posted on May, 28 2017 @ 05:59 PM
link
Someone finally found my tooth, the Toothfairy never paid me for that one in one of my past lives. Supposedly She said I forgot to put it under my pillow. Yeah right, it was a German Toothfairy.

At some point in time, everyone in the world shares the same great great ... grandparents.

posted on May, 28 2017 @ 06:14 PM
link
I love the scientific words the belief of evolution uses
Let's go
May well be over...
And belong to..
Obviously that's commentary
Now of to the science

It features two partialy fused teeth, then it says in the second paragraph they were reconstructed...

Two small paragraphs that ooze assumption, that only an individual who has an overwhelming confirmation bias could justify this as science

Now I am not saying it's wrong, just explaining why I think evolutionary science is a faith, bordering on religion.


A slam dunk would be interesting.

edit on 28-5-2017 by Observationalist because: Added bold and space

LMAO. Funny how you make the jump from assumptions to faith. To make science you have to make assumptions. But you then have to test them. Depending on the test outcome you either modify your assumptions or throw them away. What faith or religion does that?

originally posted by: moebius
a reply to: Raggedyman

LMAO. Funny how you make the jump from assumptions to faith. To make science you have to make assumptions. But you then have to test them. Depending on the test outcome you either modify your assumptions or throw them away. What faith or religion does that?

LMBFAO LOL, Ha Ha, Funny how you make the jump that tests on assumptions have been done in science, are conclusive, even have an outcome
I agree with you, now show me the tests and the outcomes mr religious boy
If you can do that I wont call yours a faith or religion

Depending on the test outcome you either modify your assumptions or throw them away.

Modify assumptions? Or throw out assumptions?
So regardless assumptions fule the science.
What's the motivation to assume a monkey could be a hominid from just a couple of teeth?

This article seems like they are just throwing you a bone (pun intended ) to keep your hopes alive.

Well, it's science, and it is very very rare in science that a scientist can say anything is "Absolultely True with 100% Certainty".

In science hypothesis are made and then tested. When those tests show to be in support of the hypothesis, then it becomes a theory, and that theory is self-correcting as additional evidence, pro and con, are found. However, as I mentioned, it is extremely rare that the evidence would lead to a theory being considered 100% absolute fact...

...Therefore a good scientist would do the right thing and use words such as "Could" and "Evidence Suggests" and "Almost certain" and "Almost Surely".

I mean, when someone claims something (such as evolution or relativity or something similar) is "Absolute Fact", many people on ATS criticize that (and rightfully so) because science doesn't know everything. But here you are now criticizing a scientist for doing the right thing in understanding that virtually no theory can be considered "100% Absolute Fact".

Its an interesting situation and after all each of us are not revealing who we really are.