Huaca Prieta is the site of a prehistoric settlement beside the Pacific Ocean in the Chicama Valley , just north of Trujillo, La Libertad Province, Peru. It is a part of the El Brujo Archaeological Complex, which also includes Moche (culture) sites.

Huaca Prieta was occupied as early as 4700 BC, before the ceramics were introduced. It consisted of a huge mound of ash, stones, textiles, plants and shells, with some burials and constructions.


This site was one earlier SA sites, it has been in the new for such things as some of the earliest know textiles in the world.


In 2016, 6000-year-old dyed cotton fabric was discovered at the Preceramic site of Huaca Prieta. Analysis of the pigment identified it as indigotin, an indigoid dye. This marks the earliest recorded use of indigo dye to date, predating the use of indigo in Egypt's Fifth Dynasty by about 1,500 years.

Some of the earliest corn is found there,

n 2012, it was reported that corncobs found at two ancient sites in Peru (Paredones and Huaca Prieta) may date from as early as 4700 B.C. This suggests that people living along the coast of northern Peru were already eating corn by that time.[5][6]

These results were reported by Dolores Piperno, and other scientists from Washington's National Museum of Natural History This is the earliest maize discovered so far in South America.

That statement is not entirely correct, teosinte, the pre cursor to corn, dating back to nearly 9k years in Peru as well

Anyhoo,
The palce has ancient roots.


About 600 kilometers north of Lima, an imposing earthen mound looms over the sea. People began building the ceremonial structure, called Huaca Prieta, about 7800 years ago. But according to a new study, the true surprise lies buried deep beneath the 30-meter-tall mound: stone tools, animal bones, and plant remains left behind by some of the earliest known Americans nearly 15,000 years ago. That makes Huaca Prieta one of the oldest archaeological sites in the Americas and suggests that the region’s first migrants may have moved surprisingly slowly down the coast.

The evidence of early human occupation stunned Tom Dillehay, an archaeologist at Vanderbilt University in Nashville who led the new study. Initially, he was interested in examining the mound itself. But geologists on his team wanted to study the landform under the mound, so “we just kept going down,” he says. The deepest pit, which took 5 years to excavate, reached down 31 meters. Shockingly, those deep layers contained telltale signs of human occupation, Dillehay’s team reports today in Science Advances: evidence of hearth fires, animal bones, plant remains, and simple but unmistakable stone tools. Radiocarbon dates from charcoal place the earliest human occupation at nearly 15,000 years ago. 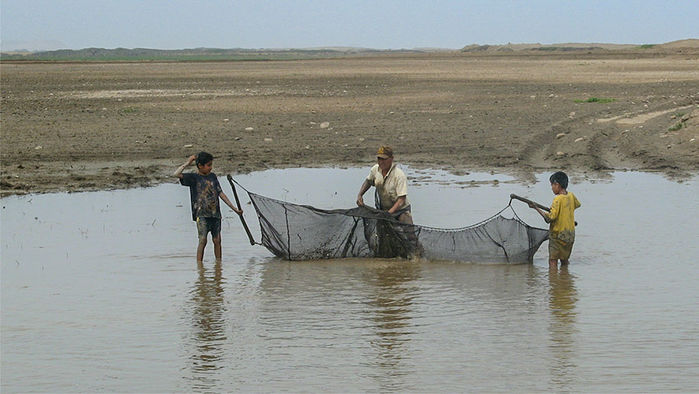 The new find isn’t old enough to prove that the first Americans came down the coast, says Dillehay, who also excavated Monte Verde. But Huaca Prieta does provide a detailed snapshot of ancient coastal lives. The earliest residents lived in temporary camps in an ancient wetland, eating avocado, chiles, mollusks, sharks, birds, and sea lions. Interestingly, Dillehay did not find any fishing lines, nets, or harpoons. But he suspects people didn’t need them because storm surges would have sent seawater flooding deep inland, leaving behind pools full of stranded marine creatures. Then, the Huaca Prieta hunters could have simply smashed them over the heads and chowed down—much like people in the region do today, Dillehay says.

The Huaca Prietans managed to do all this with surprisingly simple stone tools. Instead of complex spear points, they used flakes knocked off round beach stones for everything from prying open shellfish to cutting up plants.

“They’re like disposable razors,” says Matthew Des Lauriers, an archaeologist at California State University in Northridge, who has found the same kind of tools on Cedros Island off Baja California, where people lived more than 12,000 years ago. The similar tools could be evidence for the very first coastal migration, he says. But the only way to know for sure is to find more coastal sites.
Huaca Prieta
That last paragraph has a lot of questions in it. These people are pebble tool users, they make no blades. There are pebble tool sites to be found along the pacific coast. The dieguito culture of SoCal were pebble tool people, as were ancient dwellers of Baja Ca, and coastal Ecuador and Columbia. Itwould be interesting if they found any remains, to see if they fall into the same set of characteristics, that have been found at the other pebble tool sites along the pacific, they have very specific skeletal features common among SOME of the earliest remains.

In NW Venezuala people were making very complex blades and living a completely different lifestyle, hunting megafauna and moving north as the coastal people were moving south.
edit on 5.28.2017 by Kandinsky because: Restored first draft

I keep reading about finds putting the first peoples in the Americas earlier than the hypothesized dates.

What are your thought's on the Topper site?