If Trump collusion is proven, should "conservative" media be prosecuted?

Seems clear enough to me and the incredible importance of it should be crystal clear to anyone with basic critical thinking skills.

Eliminating or ignoring it would be a path straight to single party rule. The dangers of that should be obvious also. If either side ever gets full control, this would no longer be a country I'd wish to be in (see Venezuela's history for the obvious reason why).

Partisan madness poses a threat to us all no matter where a person falls in their ideology. There is a reason radical idea's are considered radical.
edit on 5/23/2017 by Blaine91555 because: (no reason given)


No, it is declaring media who are publishing the truth "the enemy of the people" that is reminiscent of Goebbels.

For what? the fake news being posted by the very left-wing media?... Newsflash, wikileaks, DNCleaks and even the admission of DNC hags like Donna Brazile, who had to finally admit that she did give the debate questions to Hillary while working for CNN, all show true collusion between the DNC, and the left-wing media...

Then there is the fact that the whole "Russia hacked the DNC and helped Trump" came from the same cyber security firm which had made up a report about the "same Russian hackers destroying the majority of the Ukraine's artillery, and it was found out to have been all made up by Crowdstrike... The FBI, the NSA, and the CIA were using the fake data given by Crowdstrike as evidence... Not to mention the fact that the DNC denied on several occassions the FBI access to their servers is a clear red flag that the DNC has been hiding something...

Your whole premise revolves around made up # your left-wing media, and DNC hags invented which they have not been able to prove at all.

Trump said: "I called the fake news the enemy of the people, and they are." 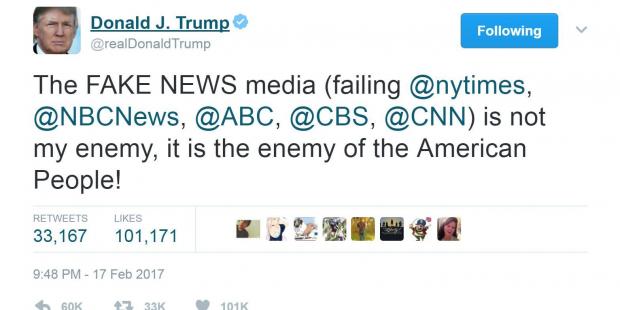 ABC, NBC, CNS, and CNN are all "fake news" because they broadcast things he actually said. And of course, there's always:

Are you a child that you must call a woman you disagree with a "hag?" Can you understand why this sort of behavior makes Trump supporters look misogynistic and childish? [/off topic]