The Purge - Who is the real enemy of this world, his name is Satan and we are fighting him.

posted on Feb, 19 2017 @ 04:12 PM
link
If anyone has seen Ghost in the Shell TV Spin off Laughing man, you would now that one child fought off the evil forces which was man operating through the form of a pharmaceutical company. The end result of the company's efforts was to end the world through the proliferation of a disease and the masking of its cure.

We in America and European nations are going through the same in an invisible war against Non-Lethal Weapons which creation unearthed knowledge of the spiritual realm. With Executive Orders given by the former President Barack Obama and Presidents as of earlier, allowed these Sound weapons in the hands of the Government (factions who are now under threat), Private companies (whose main sound assets are being sieged by special tactical forces), and Residences who belong to the Intelligence sector created post 9/11 by President George W. Bush (whose main agenda is to create the New World Order by instituting efforts along side and via government funded defense contracts.

I as a individual soldier in this war am combating Satan himself which has chosen to further his Agenda of a New World Order through the abuse of Non-Lethal Weapons and the perverse pleasure given to man which spawns off of Cold War efforts of adrenaline rushes acquired by spying. The persons who are victim of these spying actions are not Al Qaeda but innocent U.S. citizens of mainly Christian beliefs and few others.

This is however small the conversion rate is in assaults or comparisons to other conspiracies is the main threat to the future world. Non Lethal Weapons which are either built with Ultrasonic abilities or those which have been modded to copy its abilities can be applied Land Sea or Space and affect millions of people and will if the powers that be are not uprooted in the invisible campaign being instituted by National Security Agencies such as the CIA, the NSA, the FBI, the NRO, and etc. However it is simple to blame these agencies or Lockheed, Boeing, Northrop, or Raytheon, KGB; their current agenda is to end this war with positive end results on the world community. The real enemy is the individual who legally or illegally acquired or accessing government properties.

The realm of Spirituality exists and you are hearing this from a lifetime Christian who gave souls and spirits little thought. Through these Non-Lethal Weapons, spiritual attacks have become possible by the huge connection of the realm and ultrasonic frequencies. I have been assaulted as a Targeted Individual with Silent Sound, Ultrasound, Nanotechnology, Advanced Phototronics, and Infrasonic effects like eye imagery.

The really above top secret truth is that 54 black telepathic individuals were saved by living advanced NASA satellites during a day that could be described easily as the end of the world. I, a current young federal official, was playing Ghost Recon Advanced War Fighter whose gamer tag you know, was first introduced to this technology on this unfortunate day by a sound warning that there was an acoustic threat in my home (acknowledged as the CIA and the FBI). Trying to exit my family without identifying the threats source ended my up 51/50 after my brother moved my car. To this day, this happening has an effect on my family because I attacked my brother lethally in fight or flight going after the location of my vehicle.

At the facility, instead of being indoctrinated like many mind control victims claim, I was saved by mind control efforts which alleviated the trauma associated with being incarcerated. This help exists now free years later even as I am still tormented by the evil forces that are being led by Satan's agenda.

Gangstalking by Organization Crime is real and alive and will prevail if a few good men including the 54 black telepaths and inadequate but ongoing intervention.

I have been shared secrets about the Government through Silent Sound and the aforementioned methods and know without a doubt that this is the sum of all of evil and the catalyst to Armageddon.

The tools used in Electronic Harassment 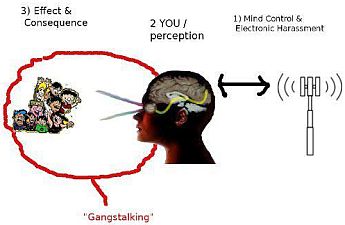 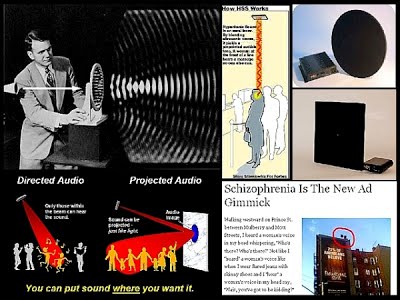 originally posted by: Cobaltic1978
Well, as an atheist, the Devil isn't part of my world, so I'll just merrily go along not my way. Dum, de dum de dum......

posted on Feb, 19 2017 @ 04:25 PM
link
The devil is only the fear of death. If you fear death you believe in the devil. Satan is a real entity. Through my telepathic experience, atheist are the easiest to pick up as troops in this War because the reality of Jesus has been proven through Quantum Science but yet to be shared with the general public.

God wants Satan to accuse man. Otherwise he wouldn't be allowed to.

Or maybe God would have not created him in the first place.
edit on 19-2-2017 by Noncents because: Repetition Removed

Hey, I am agnostic. Can I join your club?

originally posted by: neoarchetype
The devil is only the fear of death. If you fear death you believe in the devil. Satan is a real entity. Through my telepathic experience, atheist are the easiest to pick up as troops in this War because the reality of Jesus has been proven through Quantum Science but yet to be shared with the general public.

So fear of death = the devil

And Satan is a real entity, according to you.

So what if you don't fear death? Satan wouldn't be real then.

Buuuuut something tells me you're gonna find a way to spin that......

originally posted by: neoarchetype
...Jesus has been proven through Quantum Science but yet to be shared with the general public.

Oh, why didn't you just say so. Have they also proven the existence of the Tooth Fairy using Organic Chemistry?

Even if you are telling the truth and all this were revealed the average person wouldn't care less as long as its not happening to them we've crossed the threshold where there ISNT 144,000 on earth worth sealing at the moment

No the tooth fairy is just sugar demons, remember?

They work with the underpants gnomes.

Sorry. With so many made up fairytale creatures to believe in it gets difficult to keep track of them.


originally posted by: neoarchetype
...Jesus has been proven through Quantum Science but yet to be shared with the general public.

Oh, why didn't you just say so. Have they also proven the existence of the Tooth Fairy using Organic Chemistry?

No, but they're working on the Easter Bunny, since perfecting Santa Claus.

originally posted by: 4N0M4LY
I am not aetheist but I do not allow any outside force to control my life. I am the master of my own fate and free will.

posted on Feb, 19 2017 @ 04:57 PM
link
The U.S. military long has been able to launch a missile, explode a bridge or fire a weapon with the push of a button. Under testing now is a system intended to control a soldier’s psychiatric status, make him alert, reduce his stress and intervene when he suffers pain, among other applications, with the press of a button.

The plan is being developed by an assistant professor at Arizona State University’s School of Life Sciences, where William Tyler explains that available neurotechnology shows that “brain stimulation” is capable of treating neurological diseases and brain injuries as well as “serving platforms around which brain-computer interfaces can be built for various purposes.”

In a report at the Armed with Science military website, Tyler explains that “Warfighters” can be given “strategic advantages” through helmets fitted with ultrasound transducers and microcontroller devices for a range of applications to include pain intervention, “cognitive enhancement,” reducing stress and anxiety, “behavioral reinforcement,” wakefulness and alertness, “navigational commands” and “neurological/psychiatric intervention.”

“We have developed working and conceptual prototypes in which ballistic helmets can be fitted with ultrasound transducers and microcontroller devices,” he said.

What about America’s Army today? Read the analysis in “Conduct Unbecoming: How Barack Obama is Destroying The Military and Endangering Our Security”

Using funding from a grant from the Defense Advanced Research Project Agency, he said every aspect of “human sensation, perception, emotion, and behavior is regulated by brain activity. Thus, having the ability to stimulate brain function is a powerful technology.”

He said he worked to develop a technology that implements “transcranial pulsed ultrasound to remotely and directly stimulate brain circuits without requiring surgery.”

“Further, we have shown this ultrasonic neuromodulation approach confers a spatial resolution approximately five times greater than TMS and can exert its effects upon subcortical brain circuits deep within the brain,” he said.

“Our research will begin undergoing the next phases of research and development aimed towards engineering future applications using this neurotechnology for our country’s warfighters,” he said. “Here, we will continue exploring the influence of ultrasound on brain function and begin using transducer phased arrays to examine the influence of focused ultrasound on intact brain circuits.”

On the Armed With Science website forum, “Marc” lamented that it was “a pity” that science and scientists dedicate their efforts “to war instead of peace.” Added John Pattison, “This is the missing link between artificial intelligence, brain computer uploading, even cyborg research and special ability of telepathy, esp, psychic, pentacostal Christians who access others thoughts via the spiritual realm.”

In a Popular Science commentary on the issue, Clay Dillow wrote that other attempts at similar work always involved “surgically implanted electrodes,” and transcranial magnetic stimulation has “limited reach.”

“Tyler’s technology, packaged in a warfighter’s helmet, would allow soldiers to flip a switch to stimulate different regions of their brains,” he suggested, “helping them relieve battle stress when it’s time to get some rest, or to boost alertness during long periods without sleep.

“Grunts could even relieve pain from injuries or wounds without resorting to pharmaceutical drugs,” he said.

posted on Feb, 19 2017 @ 04:59 PM
link
I'm sorry. Knowledge is so far advanced while advancing technology, it has left some of you in the wind as it pertains to the spiritual realm. By the way, debunk the technology and focus on the conspiracy.

originally posted by: neoarchetype
I'm sorry. Knowledge is so far advanced while advancing technology, it has left some of you in the wind as it pertains to the spiritual realm. By the way, debunk the technology and focus on the conspiracy.

posted on Feb, 19 2017 @ 05:07 PM
link
I read the OP but you lost me at the Ghost Recon AWF bit. For the sake of the argument i will consider your post to be the truth. What do you want from me/us? Are we supposed to join the fight? How and when? The thing is i don't believe in any higher entity and i forge my own path. I'm also not sure if i want to fight Satan because God is actually pretty evil too. Do you see my dilemma? What if i want to kill both of them? Does that mean we are now enemies? I would rather prefer destroying TPTB,Daesh,Cartel Kingpins,human trafficker first and that would just be the beginning. To be honest it's a pretty damn long list before i would face Satan himself.