page: 1
27
<<   2  3  4 >>
log in
join
share:
theantediluvian
+7 more
posted on Feb, 13 2017 @ 09:57 PM
link
Well this is just breaking, it seems that Lt. Gen Michael Flynn has resigned his position as Nationa Security Advisor. I'll update with a source momentarily. This is great news in my book! Now if Bannon would resign, we'd be getting somewhere.

Okay, I saw this on Twiiter but I just flipped on CNN and it appears that Gloria Borger is the one (for CNN at least) who is breaking this. She's claiming to have been contacted by two seperate sources 15-20 minutes ago.

This isn't completely unexpected although earlier today other sources were saying he had no plans to resign and wasn't expecting to be fired. Earlier today, Sean Spicer said:

“The president is evaluating the situation,”

Then by the evening, it wa sbeing reported that the Flynn situation was "fluid."

Borger is saying that one of her administration sources was willing to stick it out with Flynn but Flynn resigned of his own volition. There's some talk about Petreaus being brought in it sounds like?

They're reading his resignation letter on CNN now. The upshot is that he is claiming that he inadvertantly gave inaccurate/incomplete briefings to President Trump and Vice President Pence regarding his contact with the Russian ambassador.
edit on 2017-2-13 by theantediluvian because: added details, updated title

The Hill said earlier today that he wasn't.

ETA: I'm seeing the reports of that around as well now. Just took a second look. Good. Dude knew he messed up.

Think charges will be filed against him after all?
edit on 13-2-2017 by Noncents because: It Does Appear True.

I am finding sources that back up the OP:

Yeah they just read the resignation letter on air. I've updated the OP.

posted on Feb, 13 2017 @ 10:08 PM
link
Not surprising.
Trump seemed really angry with him.
Trump is not going to hesitate to fire someone who screws up.

ETA: What Flynn did wrong was lie.
The phone call was completely legal. 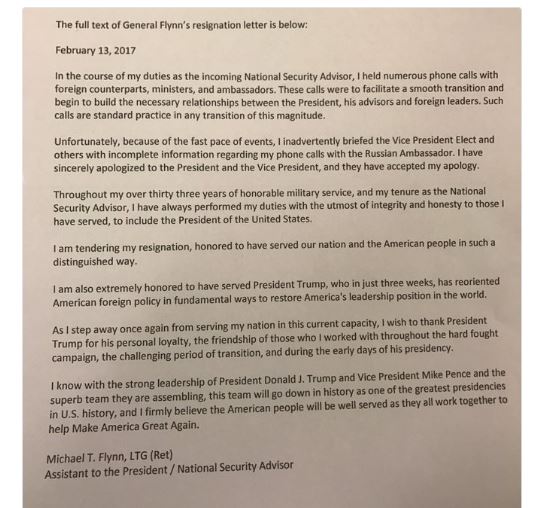 WASHINGTON — Michael T. Flynn, the national security adviser, resigned on Monday night after it was revealed that he had misled Vice President Mike Pence and other top White House officials about his conversations with the Russian ambassador to the United States, according to a source close to the Trump administration.

There are some serious leaks in this administration. It appears that the insiders can't wait to contact the media.

He should fire himself in that case. He was warned about the guy.

originally posted by: skywatcher44
Or setting up CNN for another ticking Off ? Fake news Fake views ??

It's hard to believe anything coming out of CNN until it is verified by at least one or two other sources.

If true, however, it is probably best. The controversy over his friendship with the Russian ambassador is a distraction and whether or not he lied about discussing sanctions will always be a question. Best he resign before getting fired.

His appointment didn't make sense from the beginning given the questions surrounding him, the controversial statements he's on video making, etc.

If it had been an appointment that the Senate had to confirm, I don't think he would have had a chance in hell. Well I'm feeling a little better about the Trump administration.

posted on Feb, 13 2017 @ 10:23 PM
link
CBS and CNN both reporting that Lt. General Joseph Kellogg, Jr. has been tapped to be acting National Security Advisor by President Trump.


His was first. I couldn't find factual claims fast enough.

His was first. I couldn't find factual claims fast enough.

Well, two threads are better than one! Or is that "two heads"?

originally posted by: muse7
Wonder how many more Russian agents are working inside the White House right now...

There, fixed it for you.

What is the leftist fix on Russia?
It is a distraction from the real grave danger still planted inside.