posted on Feb, 9 2017 @ 09:02 PM
link
On Tuesday of last week, a unit from Joint Base Lewis-McChord was at Fort Huachuca in Arizona for training, which included use of an RQ-7B UAV. Shortly after launch, the Shadow lost contact with the ground station, and the aircraft disappeared. Officials thought that it had crashed, and disintegrated upon impact, as no sign of it was found after a fairly extensive search.

Apparently after going missing, the aircraft decided to go sightseeing. A hiker found it Thursday, wedged in a tree, west of Evergreen Colorado, in the mountains. It was found in pieces, with a wing missing. They couldn't say exactly where it was found beyond that yet. They're investigating how it got that far, and how connectivity was lost initially.

DENVER — An Army drone that disappeared on a training flight in southern Arizona has been found hundreds of miles away in Colorado, and the military is trying to figure out how it got there.

A hiker found the $1.5 million Shadow drone stuck in a tree Thursday in the mountains west of Evergreen, Colorado, officials at Fort Huachuca say. Officials couldn't immediately say where in Colorado it was found. It was missing a wing. A recovery effort is underway and officials continue to investigate how it lost connectivity.

posted on Feb, 9 2017 @ 09:13 PM
link
Im wondering if UAV cruising around the US on their own accord should concern us? Crashes into an apartment building won't go over well with the civilian population. Maybe an auto destruction device might do, if it exits an geofencing area?
reply to: Zaphod58

Fortunately most of the training areas are wide open areas, such as this one. This is the first time I've heard of one wandering like this, in all the years they've been flying them. Usually they lose connectivity because they lost power, and they crash pretty quickly.

Could this be a result of hacking? I remember a wired magazine article not to long ago that said hacking these things was surprisingly easy.

Also, is hundreds of miles the normal operating range for these things? Not sure if there solar powered or what, but maybe a software problem just caused it to loose contact and it just went strait until it ran out of fuel/power.

I don't have a lot of knowledge in this field so this is just speculation from the peanut gallery. My apologies if I'm completely off base and just wasting your guys time.

Normal range on the Shadow B is 8-9 hours, flying between 65 and 115 knots. So 900 miles is theoretically possible, if it was fully fueled, and flying near 100 knots.

I'm thinking it was defecting to Canada.

It achieved sentience for five minutes and was on the way to cruise the land of enchantment with no understanding of its existence or concept of flight. It just knew it like what it saw and continued there in full awe of the view like an infant exploring magnets or wheels.
edit on 2-10-2017 by worldstarcountry because: (no reason given)

posted on Feb, 10 2017 @ 10:00 AM
link
If Short Circuit 2 is anything to go by, there will have been a spate of criminal activity around the time the drone went missing. 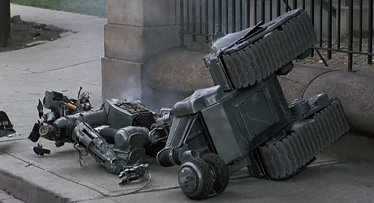 I am confused... I was lead to believe that this UAV had a limited range, which ought to have seen it plonk itself down much nearer to its launch area than this...

The range given includes an 8-9 hour loiter time. They give the range for UAVs to include the loiter time, because they are expected to remain on station for a given time.

Interestingly, I only watched Matthew McCognahayhayhayzeez Movie "Interstella" or something, the other night, an he was out driving around in post apocoliptic World, and saw an "Indian" UAV flying around on a sightseeing tour and captured it with his supa duda computer thingy and crash landed it in a field........Well, it was a movie, nothing like that would happen in real life....
They crash into trees instead........
edit on 11-2-2017 by gort51 because: (no reason given)

posted on Feb, 11 2017 @ 03:14 PM
link
Apparently they decided to try again. We got pictures of a Shadow flying over Marana today. It wasn't heading north so they might have fixed things.

originally posted by: gort51
Just imagine the hooha if it actually crashed into someones house, or a school etc.

Interestingly, I only watched Matthew McCognahayhayhayzeez Movie "Interstella" or something, the other night, an he was out driving around in post apocoliptic World, and saw an "Indian" UAV flying around on a sightseeing tour and captured it with his supa duda computer thingy and crash landed it in a field........Well, it was a movie, nothing like that would happen in real life....
They crash into trees instead........


It wouldn't do much damage, they are mainly composite. Obviously not a great thing to happen but an out of control F-15 would be worse and we don't all panic when one of those takes off.

One of the Aardvarks we lost at Pease hit a multifamily townhouse type building after the crew punched out. It went through from one end to the other and damaged the buildings around it.

No one even blinked afterward, beyond the insurance, and investigation sides of things. Luckily it was 45 minutes before the buses from the local school arrived,and everyone not working was out at the time,but still, you didn't hear people talking about how dangerous the Vark was.

posted on Feb, 11 2017 @ 07:40 PM
link
as i recall the Iranians hijacked a US UAV by overriding the gps signal...the UAV guidance system thought it was going home, not Iran. But this requires a stronger gps signal than the satellites, and a chase plane...so if that happened in this case there should be a ATC record of two blips somewhere between the fort and colorado...

Wow.....very strange, and a bit disturbing! Since the range is so small - 77 miles - and it traveled 600, there aren't a lot of possibilities! weather, maybe, but 600 MILES??? Seems a long way, for it to not drop before that. Human intervention is another possibility.

I wonder what the weather was in and between those locations.

That hole was closed not long after they spoofed the Sentinel. The Shadow also isn't semi autonomous like the Sentinel is. It's controlled by a ground station at the launch site.