Did Timothy McVeigh do the deed.

I came across the Corbett report while watching his 9/11 videos. He investigates thoroughly, and makes sure his facts are checked. Altogether he is a top notch conspiracy theorist.

In this video he goes over everything leading up to the Oklahoma city bombing that happened in Timothy's life. I have to say I never questioned the narrative untill I saw this video. I know there is always someone questioning the narrative, but corbett makes his case, and sold me.

It's a long watch 58 minutes, but well worth it for the information given.


Timothy McVeigh. We’ve been told so much about him, the Oklahoma City bombing, and what it meant for America. But what if it’s all a lie? Join us today for this special Corbett Report podcastumentary as we examine the multiple trucks, multiple bombs, government informants, faked executions and other pieces of information suggesting that McVeigh was not a “lone wolf bomber” at all but a sheepdipped special forces operative working for the government, exactly as he claimed.

Full transcript, and also an audio version for people with bandwidth issues. www.corbettreport.com...

posted on Feb, 8 2017 @ 03:42 PM
link
Personally, I have certainly never thought he acted alone. I have even questioned if he was anything other than a fall guy. I remember seeing him and he just seemed unmoved, indifferent to the whole situation. Not particularly the demeanor you expect from a person facing the charges he was.

Just looking at the security camera's that should have recorded the event (about 40 or so) and the fact that they gave the excuse in court that all the tapes were right at that moment being replaced says a lot about the situation especially as that excuse also should cover the tapes from adjacent buildings that have cameras on their own circuit and which also should have recorded the event itself.


Utah attorney Jesse Trentadue believes a video exists showing McVeigh was not alone in detonating the bomb. The government says McVeigh was the only one who detonated the bomb, which killed 168 people. Trentadue filed a Freedom of Information Act lawsuit against the FBI in 2008, saying the FBI has not adequately searched its archives for the security-camera video. Trentadue said he believes the presence of a second suspect explains why his brother, who resembled a police sketch of a suspect, was flown to Oklahoma months after the bombing.

His brother died in a federal holding cell. If he wins, Trentadue hopes to be able to search for the tapes himself rather than having to accept the FBI's answer that they don't exist. The trial is expected to conclude Thursday. There is no jury, and U.S. District Judge Clark Waddoups is expected to rule at a later date. The testimony from Williams and Brannan came a day after a former police officer who was at the bombing scene said he saw FBI agents climbing ladders and taking cameras off the federal building shortly after the attack that killed 168 people.

A woman who lost her two grandsons in the bombing also said Wednesday there were surveillance cameras in an apartment building she lived in that should have recorded the bomb going off. She said she observed a police officer and FBI agent in the building six months later talking about collecting the tapes.

Mcveigh is just another osswald.

Which is part of the reason why so many distrust these federal agencies.

From Oklahoma City to the 1st WTC attack to current day "terror plots", the FBI seems to be doing a lot more than just "investigating".

Sargent Terrance Yeakey was one of the first to respond to the bombing. We can only speculate as to what he may have seen and heard when he called his wife crying saying, "It's not true. It's not what they are saying. It didn't happen that way".

Apparently, Officer Yeakey had been accumulating evidence and storing it in a warehouse which would have contradicted the Official Story, evidence showing explosions occurred from within the building.

Needless to say, Officer Yeakey died soon after. His bizarre death would be ruled a "suicide".

Then there was Kenneth Michael Trentadue whom the family alleges was killed by the FBI in his jail cell. His death was ruled a suicide.

The only witness to the murder, an inmate by the name of Alden Gillis Bake, was found dead in his cell shortly thereafter. You guessed it, another "suicide". 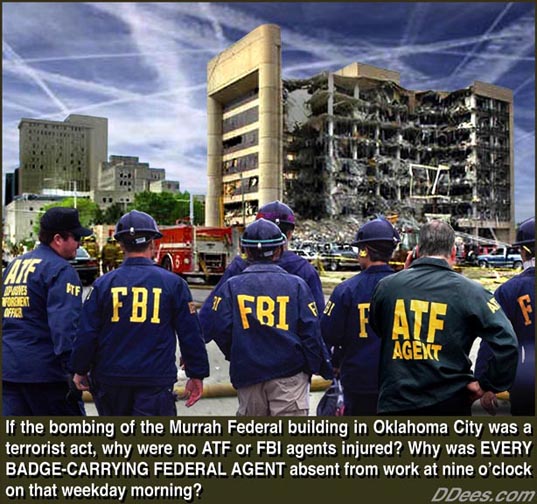 What 'false flag' motivation would there be to blow up the federal building and have McVeigh (of all possible bad guys) be framed for it?

It doesn't make a whole lot of sense. They could have gotten just as much traction on pursuing militias by blowing up a mini-mart in Fargo, why their own building? Maybe they just wanted a new building and something to do (?????).

He did have help.

Terry Nichols I believe was his name.

Also, witnesses claimed a dark skinned man got out of the truck.

He was at Waco. The burnt up kids thing set him off.

Wasn't that all about the time of a gun control bill?????
And it would make a good practice run if someone wanted to make a big splash at a later date.
Just musing.

Edit. Thanks to android phone, I screwed that post up.
edit on 8-2-2017 by VenatiusFortunatus because: (no reason given)

I think it failed twice before the bombing

So many birds killed with one stone. Stop the growing militia movement AND get the omnibus anti-terror bill passed, plus garner some support for the Clinton re-election bid after the disaster in Waco and a couple of other issues. All of that, and add in this....


Mr. Whitney told the court that Mr. Menepta, who was born Melvin Lattimore in St. Louis, and changed his name in 1989 after converting to Islam, came to the attention of the authorities the day after the Oklahoma City bombing in 1995. He testified that an informer told federal agents that Mr. Menepta had belonged to an Islamic group in Norman and St. Louis, whose leaders advocated terrorist acts and killing law enforcement agents. Mr. Whitney also told the court that Mr. Menepta had said the Secret Service told him that one of the terrorists who bombed the World Trade Center in 1993 had used his visa number. Mr. Whitney said he could not confirm Mr. Menepta's account. After the Sept. 11 attacks, Mr. Menepta, who lives in Norman, gave several interviews in which he defended Mr. Moussaoui, 33, whom he knew through a mosque. Mr. Moussaoui, a French citizen of Moroccan descent was arrested in Minneapolis on Aug. 17 on immigration charges after he sought lessons on how to fly jets, but expressed no interest in learning how to take off or land.

What are the odds that a single Moslem convert would be connected to the three biggest terror attacks in US history up until that point? The whole OKC incident has Clintonstink all over it dude, and that's putting it nicely.

Without watching the video: Of course he did...but had help...and didnt plan it alone...or for himself.

But this didn't make sense to me.

This video is remarkable.
Funny, how we can literally point fingers at the Clinton clan and their involvement in this. The entire scenario is a massive conspiracy from the higher ups to achieve some insane agenda. Just like 9/11 and countless other horrific tragedies against the American People.

If the citizens of this nation even had a clue about what nefarious acts their government sponsored and perpetrated in the last 100 years, there would be an internal war the likes of which have never been seen before.

I abhor the people behind all of this...those who seek to destroy innocent people for their will. Its blatant and obvious.

posted on Feb, 8 2017 @ 08:20 PM
link
Here is one thing that I noticed immediately. The sketch of the 2nd bomber has an uncanny resemblance to the heavyweight boxer, Tommy Morrison. Tommy Morrison is from Oklahoma. He died of AIDS.

If anyone can post a side by side of the composite and a photo of Tommy. You may see what I see.

originally posted by: galaga
Here is one thing that I noticed immediately. The sketch of the 2nd bomber has an uncanny resemblance to the heavyweight boxer, Tommy Morrison. Tommy Morrison is from Oklahoma. He died of AIDS.

If anyone can post a side by side of the composite and a photo of Tommy. You may see what I see.

That's an interesting idea except Tommy died in 2013. A couple of years before he died he had to return the fighting because he was broke. If he was part of a conspiracy he would have either been killed off or paid off a long time ago so neither one of those really make any sense. Why leave all those loose ends hanging around?

posted on Feb, 8 2017 @ 09:24 PM
link
I don't know about you guys, but John Doe 2 sketches looked exactly like the military pictures of Andreas Strassmeir that was shown. I believe he was the second rider in the truck and he detonated it.

Eerily similar. Almost wondered why Corbett didn't comment on them.


In this two and half hour video Ole Dammegård, a rather sensitive empathic man, shares his research into the Oslo massacre.


But generally he is very relaxed and soothing for a conspiracy thinker. Not a bad listen if one has the hours to spare. But this is not the reason I post it here.

He has a completely new take on what happened there. It ties directly into the Opening Post. Makes a convincing case that Breivik did not act alone.

Thanks for the thread Crumbles.

originally posted by: Flyingclaydisk
Sorry for the dumb question, but...why?

What 'false flag' motivation would there be to blow up the federal building and have McVeigh (of all possible bad guys) be framed for it?

It doesn't make a whole lot of sense. They could have gotten just as much traction on pursuing militias by blowing up a mini-mart in Fargo, why their own building? Maybe they just wanted a new building and something to do (?????).


Perhaps so the following bill could be signed into law.

Even way back then, I suspected that there was a lot more to the case than we were being told. No time to watch the video, just yet, but bookmarking for later! Should prove interesting.

False flags are not a new thing.

Other bombs inside the building, more than one truck, accomplices, witness intimidation, media complicity, many reports of foreknowledge, official narrative from the Feds, inconsistencies with the "primary" bomb and damage to the building, witnesses who committed "suicide", federal agents who were told to stay home the day of the bombing etc.

Frustrated with what they called a cover-up, local residents of Oklahoma City led by representative Charles Key, formed the Oklahoma Bombing Investigation Committee.

From 2014: FBI 'completely confident' it has NO unseen Oklahoma bombing surveillance tape that shows 'accomplice'.

She said: 'The plaintiff has refused to accept that the 30 tapes he got are the only tapes'.

His belief that the tapes exists stems from a Secret Service document written shortly after the bombing that describes security video footage of the attack that shows suspects - in plural - exiting the truck three minutes before it went off.

A Secret Service agent testified in 2004 that the log does exist, but its information was pulled from reports that were never verified, said Stacy A. Bauerschmidt, who was then the assistant to the special agent in charge of the FBI's intelligence division.

The 30 video recordings the FBI has released don't show the explosion or McVeigh's arrival in a rental truck.