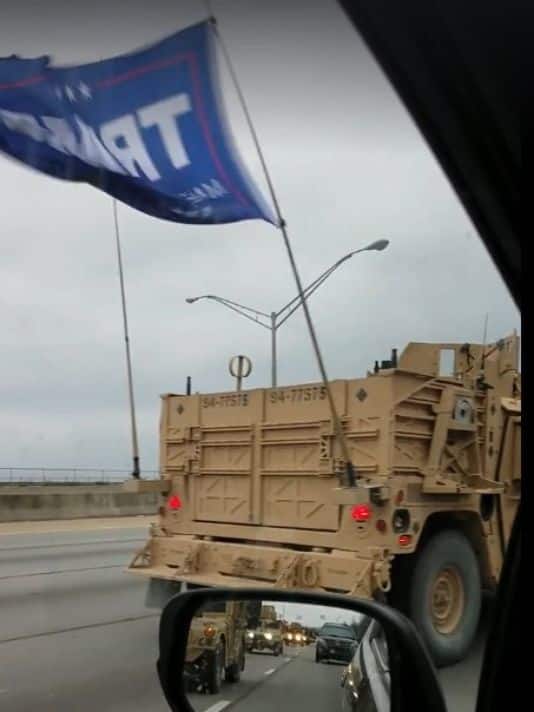 Patrick Hodges, a spokesman for Ft. Knox, said it wasn't theirs. So did the Kentucky National Guard, Maj. Stephen Martin, director of public affairs. Maj. Jamie Davis, a Defense Department spokesman, examined images of the four-truck procession for the Courier-Journal, said he doesn't think it belonged to any service branch — and that the vehicles may have been military surplus. However, after I viewed the photo, you can see that there appears more than four vehicles. Regardless, I think that all branches of the US Military are very pleased to have a new CIC, and are displaying their appreciation. GOD Bless The USA!
www.tennessean.com...

The third letter is a "A", that was easy to debunk.

originally posted by: Trueman
a reply to: Violater1

The third letter is a "A", that was easy to debunk.

Are you sure that flag says Trump ?

Any I found a video on YouTube. I couldn't view the video on the news article.

Wouldn't it be great if more of this happens. The grunts in the military declaring We Have Your Back Mr President.

Similar to how we were glad when Clinton left...and Bush. But at least Bush gave us reasonable pay raises.

I was making about $400 a month when I came in at the end of Clinton's term.

if those were in fact active members of the service, or active reserve or reservist, shame on them. we defend and protect the USA, not political ideals. never should political ideology affect your oath. never.

im sure theres more to this.

posted on Jan, 31 2017 @ 01:40 PM
link
I doubt this is an actual military convoy as everyone in the military knows they are to present an apolitical face in public.

I see those same blue Trump flags hanging from porches frequently in my area.

But I agree those are most likely not official military vehicles.
Military surplus vehicles are also a common sight around here.


originally posted by: watchitburn
a reply to: Violater1

Similar to how we were glad when Clinton left...and Bush. But at least Bush gave us reasonable pay raises.

I was making about $400 a month when I came in at the end of Clinton's term.

youre a disgrace to the uniform.

I don't see any convoy markings. No placards, no flags/pennants, etc. At least when I was in, we had to have signs and flags displayed any time we were in convoy.