Hungarian Prime Minister Viktor Orban said that 2017 would bring about “the extrusion of George Soros and the forces symbolized by him.” Orban has accused Soros of undermining European borders and values by helping facilitate the flow of refugees and asylum seekers from the Middle East and elsewhere. During a Reddit AMA (Ask Me Anything), WikiLeaks’ Julian Assange also blasted the Organized Crime and Corruption Reporting Project, funded by Soros, for focusing “exclusively on negative stories about Russia and former So

It's about damn time people wizened up about this guy.

He's like a festering wound on the face of humanity.

Hungarian Prime Minister Viktor Orban is simply covering his own back when he, along with many peasants knew what was going on long ago.

If the NWO and Soros won with their Hillary puppet, do you think he would have done what he has done now? Hell no. He would be waiting for his blood money paycheck from Soros.

Orban is just a coward dumping the hot time bomb (Soros) onto someone else like in the game, 'Pass the Parcel'.
edit on 22-1-2017 by Tristran because: Spelling

Everyones pineal gland should be peaking upon gazing upon this walking corpse - he oozes bad juju so when folks actually catch snippets of his agenda, it confirms why we all share this natural instinct about the diseased pig.

That may be totally true however, to recognize evil is the first step to a good old fashion beheading after an appropriate amount of bodily hurt... Sorry to be so blunt... I can not stand someone who causes so much pain and suffering with everything he basically touches all over the world.. His childhood warped him IMO


It's about damn time people wizened up about this guy. He's like a festering wound on the face of humanity. 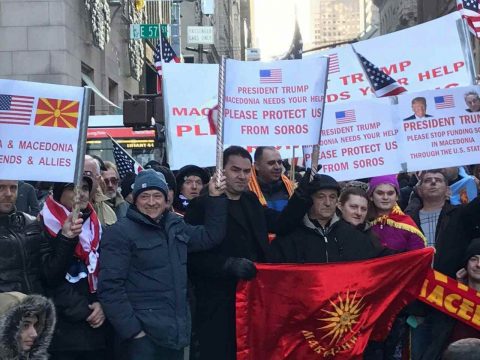 Now remember that campaign ad from Trump where he bashes Soros :

edit on 22-1-2017 by theultimatebelgianjoke because: filled out

originally posted by: cavtrooper7
TURN HIM OVER TO RUSSIA!

I hope he is extinguished but I am sure his masters will do their best to ensure he remains.

That includes a ton of businesses, religions and the military. Do you want to kill them too??

I still haven't seen any proof that Soros is worse than any other billionaire, and the fact that conservatives hate him so much makes me believe that he isn't that bad, since they lie or exaggerate about everything. Look at how overblown their hate of Obama has been.

So just what do these emails reveal about Soros? The leaked documents include proof that Soros has been involved in all of the below machinations, actively intervening and interfering in world affairs on a colossal scale.

10 Machinations of a Master Manipulator

1. Trying to sway a U.S. Supreme Court decision to get documentation and welfare for undocumented or illegal immigrant parents of a U.S. citizen child:

“Grantees are seeking to influence the Justices (primarily via a sophisticated amicus briefs and media strategy) in hopes of securing a favorable ruling in U.S. v. Texas, and using the case to redefine messaging and align the movement.”

2. Trying to buy journalists to present a favorable Ukraine narrative:

“Select journalists from the 5 target countries (Germany, France, Spain, Italy, Greece) and offer them long stay reporting trips in Ukraine. Rather than specify what they should write about they should make suggestions for articles; we retain a veto on stories we think are counterproductive… this isn’t proper independent journalism and we may damage our credibility with journalists. Journalists may produce stories that have no relevance for the narrative we seek to inform or stories that are counterproductive (enforcing narratives of fascism etc.)”

(Remember that in June 2015, a small group of Ukrainian hackers exposed the communication between new president Petro Poroshenko (a U.S. asset) and Soros, which showed that Soros was the puppet-master assuring Poroshenko of U.S. help. In Barack Obama’s words, the U.S. “brokered a deal to transition power in Ukraine.”)

3. Influencing and trying to take advantage of the European migrant crisis:

“Our premise for engaging in work related to governance was that, in addition to mitigating the negative effects of enforcement, we should also be supporting actors in the field proactively seeking to change the policies, rules, and regulations that govern migration. We also believed that advances at the regional or international levels could create impetus for policy change or implementation of existing norms at the national level. We deliberately avoided the term “global governance” because there is no single system at the global level for managing migration.”

“The current refugee crisis is creating space to reconsider the governance of migration and the international refugee regime … reforming migration governance at the global level.”

“Although [comprehensive immigration reform] was not achieved, winning the Senate with such a large, bipartisan majority was a partial victory and further than the movement had gotten in recent decades, and, as a result of the effort, the immigrant rights movement infrastructure matured and ultimately emerged stronger, more coordinated, and more cohesive.” – Document including a presentation from Ivy O. Suriyopas, a program officer with OSF’s U.S. Programs

5. Funding BLM (Black Lives Matter) to the tune of $650,000, which had more to do with instigating violent anti-police riots than genuinely helping black people dealing with poverty, racism and discrimination:

“Recognizing the need for strategic assistance, the U.S. Programs Board approved $650,000 in Opportunities Fund support to invest in technical assistance and support for the groups at the core of the burgeoning #BlackLivesMatter movement.”

For more analysis on how the BLM movement is being coordinated and manipulated at high levels, along with the migrant crisis, see my article, Decoding the Social Engineering Tactics of the New World Order (NWO).

6. Dictating to then U.S. Secretary of State Hillary Clinton how to handle a political situation in Albania (as revealed by Wikileaks):

“Dear Hillary, A serious situation has arisen in Albania which needs urgent attention at senior levels of the US government. You may know that an opposition demonstration in Tirana on Friday resulted in the deaths of three people and the destruction of property. There are serious concerns about further unrest connected to a counter-demonstration to be organized by the governing party on Wednesday and a follow-up event by the opposition two days later to memorialize the victims …”

Soros went on to tell Hillary exactly who she needed to appoint as mediators — Carl Bildt, Martti Ahtisaari and Miroslav Lajcak — and Hillary did what she was told.

7. Donating money (buying influence) to “social justice” through centralization of power in the State:

“Build state-based power: Advance social justice in critical states through state-based issue advocacy and organizing where the opportunities to advance (or the threats to) open society are particularly significant.”

8. Trying to make Greece support the Ukrainian Coup and turn against Russia:

“In general, and at your discretion, do not say you are doing this for [my] Open Society [Foundation] because it is likely to close down doors. There’s a lot of suspicion about Open Society in Greece, mainly because of its positions vis-à-vis the former Yugoslavia.”

9. Gathering information on those opposing his agenda:

Daily Caller reports that Soros gave Center for American Progress (CAP) a $200,000 grant, then two more grants for a total of $500,000, for the purpose of researching and monitoring the activities of opponents such as Pamela Geller (Stop Islamization of America), organizations such as Jihad Watch and the Middle East Forum, Liz Cheney (daughter of former VP Dick Cheney), as well as examining the role played by right-wing media, the Tea Party movement and others.

10. Controlling the U.S. Ambassador to Ukraine and other key Ukrainian figures:

Soros and his NGO executives conducted detailed and extensive meetings with just about every actor involved in the Maidan coup in Ukraine. These included U.S. Ambassador Geoffrey Pyatt, David Meale (Economic Counsellor to the Ambassador), Lenny Benardo (OSF), Yevhen Bystrytsky (Executive Director, IRF), Oleksandr Sushko (Board Chair, IRF), Ivan Krastev (Chariman, Centre for Liberal Studies), Sabine Freizer (OSF), and Deff Barton (Director, USAID, Ukraine). I wonder where Vicky “# the EU” Nuland is in all of this, but I’m sure she’ll be in there somewhere.

In this excerpt below, Soros and Ambassador Pyatt are on the same team in terms of propaganda dissemination after the illegal U.S. coup:

Ambassador: “The short term issue that needs to be addressed will be the problem in getting the message out from the government through professional PR tools, especially given Putin’s own professional smear campaigns.”

GS: “Agreement on the strategic communications issue — providing professional PR assistance to Ukrainian government would be very useful. Gave an overview of the Crisis Media Center set up by IRF and the need for Yatseniuk to do more interviews with them that address directly with journalists and the public the current criticisms of his decision making.”

edit on 22-1-2017 by theultimatebelgianjoke because: filled out

That includes a ton of businesses, religions and the military. Do you want to kill them too??

I still haven't seen any proof that Soros is worse than any other billionaire, and the fact that conservatives hate him so much makes me believe that he isn't that bad, since they lie or exaggerate about everything. Look at how overblown their hate of Obama has been.

Thank you ... you just stated why Trump won... When the left and the NWO right both hate someone then they deserve another look and that is why America has new new president called Trump ...

If you do not know about Soros then some will forgive you ignorance on the subject.. He has financed the overthrow of governments and mayhem around the world... Spend a short time on the man and his doings and see if you still feel the same.. Never mind by reviewing some of your post it would be a waste of your time...

originally posted by: Sublimecraft
a reply to: 727Sky

Everyones pineal gland should be peaking upon gazing upon this walking corpse - he oozes bad juju so when folks actually catch snippets of his agenda, it confirms why we all share this natural instinct about the diseased pig.

I'll admit, it gives me the willies every time I see a picture of the human skinjob they put over that creature.

What the hell do you think conservatives do?! Including the US government, military, CIA and of course the master manipulators in the UK as well.

You people are either very ignorant, or unbelievably biased. Based on past experience, I'd say it's the latter.

What the hell do you think conservatives do?! Including the US government, military, CIA and of course the master manipulators in the UK as well.

You people are either very ignorant, or unbelievably biased. Based on past experience, I'd say it's the latter.

What you say is inaccurate..
Libya, Syria, Yemen, just to name a few non conservative actions.. in total there are 7 countries your hero democrat administration is bombing as of today... Yep must be Bush's fault.... but how does Bush direct the Clinton state department to over throw the legit governments of Libya or Syria? ! Bush must be another Soros clone ?

posted on Jan, 22 2017 @ 08:23 AM
link
The CIA has been overthrowing governments since it's inception, in fact their overthrowing the legitimate leader of Iran led to the hard core muslims taking control of pretty much the whole region.

originally posted by: CB328
The CIA has been overthrowing governments since it's inception, in fact their overthrowing the legitimate leader of Iran led to the hard core muslims taking control of pretty much the whole region.

Now that we can agree upon