The fact of the matter is that they could be telling you anything. The only bots I see here are the gullible ones.

Posters will keep to discussing the topic of the OP.

They will NOT be posting about or discussing each other, as that is off topic.

Off topic posts will be removed, and post bans handed out.

The fact of the matter is that they could be telling you anything. The only bots I see here are the gullible ones.

There's a phenomenon that happens on earth, explained previously, called gravity waves. It would appear from that data that a similar thing is happening on Venus - which is hardly that surprising considering the similarities between the two planets. And why would "they" tell us anything other that what has been observed?

Data is data. Sure it's open to interpretation, but it seems like a pretty reasonable first explanation. More data may contradict this. We'll have to wait and see. No conspiracy required.


Actually, it didn't go sailing off into deep space;

Well, these were not my words.

Posting a drawing is not research. I would like to see the orbital motions of Venus and the changing position of the probe during the past 5 years.

I'll leave it at that.

The fact of the matter is that these are the exact same types of idiotic arguments used in the flat earth threads.

The irony here (that I'm sure you won't be able to appreciate) is that you are typing out these idiotic and utterly imbecilic arguments on a device (computer) which was developed, in part, by the needs of the space program that put this science package in orbit.

It would seem as though this is not an isolated phenomenon on Venus:

Which is what Taguchi thinks is going on on Venus. “We suppose that highlands are a key to generating the stationary gravity waves, because most of the bows—and we have found more than 15 bows so far—have appeared above the highlands at their centers,” Taguchi says. The giant initial bow the infrared camera saw in 2015, for instance, was over Aphrodite Terra, a rugged, ridgy area about the size of Africa. Certain lower atmosphere or surface conditions could cause vertical gravity waves to propagate to the tops of Venusian clouds, creating a hot, bright, stationary bow. The shape will have something to do with the exact structure of the mountain below, but there are a lot of other variables that go into making that bow—not that you could see it. “In the visible spectrum, Venus is uniformly bright because the cloud particles just scatter solar particles,” Taguchi says. “Human eyes can’t see it. That’s why I’m glad to have a sensor that can go there in place of me.”

The article goes on:

Prior to this study, scientists didn’t believe that gravity waves could propagate this high up into the atmosphere, thinking they’d be confined to the lower atmosphere. And the exact hows and whys of these bow structures are still elusive. (Not to mention a sample size of about 15 is pretty dang small.) “It can’t be as simple as surface winds flowing over mountains, because the feature has been seen only in the late afternoon on Venus,” says Gerald Schubert, a geophysicist at UCLA. Why time of day would make giant vertical gravity waves more or less likely is anybody’s guess: “That’s what we have to answer in the next step of the study,” Taguchi says.

Taking the above into account, look at the gif once more:

It will be interesting indeed to see what else comes out of this project. Given the timing of the events, I would surmise that perhaps isolation has something to do with how these gravity waves are formed.

originally posted by: MatterOfPerspective
a reply to: wildespace
Posting a drawing is not research. I would like to see the orbital motions of Venus and the changing position of the probe during the past 5 years.

When the probe failed to enter the Venus orbit, it was actually predicted, based on orbital mechanics, that the probe will get another chance in 6 years (which was reduced to 5 years by carefully-calculated engine firings).

So yeah, research before you attempt to ridicule stuff.

P.S. that video was created in 2010 (when the probe failed to enter orbit), thus the animation doesn't reflect the orbit corrections and the Dec 2015 rendezvous when the successful insertion was performed.
edit on 18-1-2017 by wildespace because: (no reason given)

I would like to see the orbital motions of Venus and the changing position of the probe during the past 5 years.

This diagram shows Akatsuki's hibernation orbit around the Sun (green) with respect to Earth's (blue) and Venus's (red) orbits, before its reunion with Venus on December 6, 2015.
JAXA 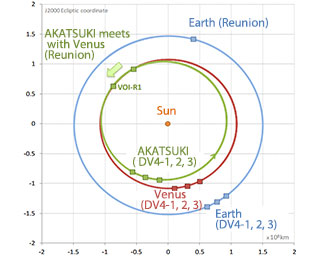 This diagram shows Akatsuki's current (green) and future (purple) orbits. The additional engine burn planned for spring 2016 will reduce the farthest distance of the spacecraft from Venus.
JAXA 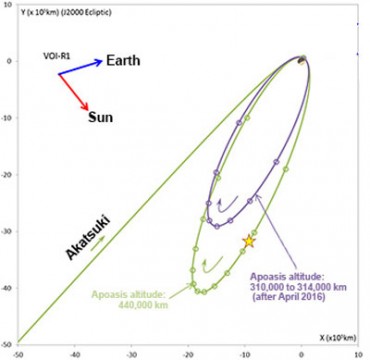 With its main means of propulsion ruined, Akatsuki flew past Venus and entered solar orbit, and scientists and engineers scrambled to recover the mission. They came up with an innovative solution: burn its four reaction control thrusters for over 20 minutes — much longer than before — at the next available opportunity to enter orbit around Venus. Engineers tested a series of shorter burns in 2011 to show that this attempt was indeed possible. The spacecraft was then placed in hibernation mode to extend its life.
...
The 2015 orbital insertion places Akatsuki in a slightly wider-ranging orbit than originally intended. The planned track would have carried the spacecraft around Venus every 30 hours, with a closest approach of 300 km. This week’s burn placed Akatsuki in a 13.6-day elliptical orbit that brings it as close as 400 km to the surface. Next March, JAXA is planning a series of engine burns that should shrink Akatsuki’s elliptical orbit to a period of 9 days.

It looks like the spacecraft orbit was mostly inside the orbit of Venus after it missed it's original rendezvous with a tangential intersection. They had to wait until both orbits synced up again before they could bring the spacecraft into orbit around Venus. Until that point in time, it was merely circling the sun waiting to catch back up with Venus; or waiting for Venus to catch up with it. In either case, it's not a difficult concept to grasp...

The information is out there if you really want to find it. If you'd rather toss out baseless statements, that's on you.

This is an excellent video showing what the original plan was. One can clearly see the relationship between the orbiter's track and how in intersects with the orbit of Venus in a couple of places. Pretty cool that they were able to shave off an entire year by performing a couple of correction burns.
edit on 18-1-2017 by jadedANDcynical because: more


The irony here (that I'm sure you won't be able to appreciate) is that you are typing out these idiotic and utterly imbecilic arguments on a device (computer) which was developed, in part, by the needs of the space program that put this science package in orbit.


Given the timing of the events, I would surmise that perhaps isolation has something to do with how these gravity waves are formed.

What timing is that?


If you'd rather toss out baseless statements, that's on you.

Why don't you make sure your sources are not talking BS.

I read somewhere that there was a region high in the atmosphere of Venus where the temperature was actually within the "Goldilock" zone.

Could this be an indication of life?

This would be interesting. After all, we know of extremophiles here on the earth that live in conditions which mirror some of those on Venus (temperature, highly acidic conditions, etc), and there are the Tardigrades which are said to be able to survive vacuum.

Finding something even as simple as single cellular organisms outside of Earth space would be a huge scientific find. It would show that life is not singularly confined to Terra.

Other places simple organisms might exist are in the oceans of Europa and Enceladus. Titan might also harbor similar such creatures. And then there are the clouds of Volatile Organic Compounds found in deep space. Who knows what we might find waiting for us if we ever get off this rock with more than a few unmanned probes.

Specifically to your point:

The sulfur present in the atmosphere may even be utilized by microbes to help resist the effects of the intense life-killing UV radiation. The clouds are thought to be mostly uninhabitable, with temperatures at the base reaching 206F, and negative 46F at the top. There is, however, a band in the middle of the atmosphere that is actually at a rare Earth-like room-temperature. Unlike the clouds of Earth, these Venusian clouds are much thicker and more stable, with dust particles able to float for months at a time instead of a few days. This is perhaps sufficient time to be biologically sustainable enough for microbes to reproduce. Certainly not an ideal locale for the aspiring biologist hoping for a hands-on experience!

It's not a crater rim, it's a known geological feature:

It is suggested that the centre of the bow-shaped structure is located at the western slope of the western high land of Aphrodite Terra, approximately 15◦ west of the peak in the surface topography.

They were right on top of it!

They really can't drive can they. Where were their boosters when they needed them.

Guess the Protomolecule has landed.

Saw this report, been keeping my eye on this event the past several weeks too. But see if you can make out what is being said in this video. And lately ive been feeling the sun a bit hotter than usual...

Just passing thru here a bit , but at what point in modern times , Did the "witch trials" get reinstated .

ATS has always held a cornerstone of class , when did they let the trolls in , the ones that love to demoralize another mans words .

Witch trials? Like when they persecuted people that opposed popular view?