page: 1
52
log in
join
share:
Ohanka
+24 more
posted on Jan, 17 2017 @ 03:41 AM
link
Anyone who has read anything about the second world war will have inevitably also read up on the weaponry used by the German Wehrmacht. An innovative bunch, the Germans set many firsts in the world of weaponry, such as the first guided missile, the first guided ballistic rocket, the first jet fighter to enter service and of course the first ever mass produced assault rifle.

If you dig further one stumbles upon some of the less well known projects. Such as giant land battleships, aircraft that resemble stealth aircraft of today and even an orbital death ray.

But one of the most mysterious weapons of the war is the German Kugelpanzer. 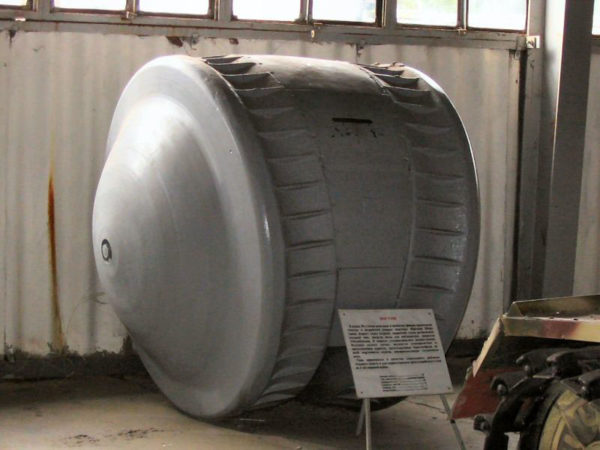 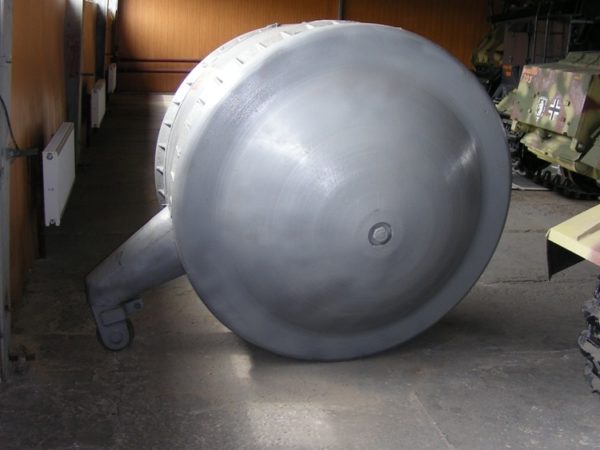 This strange looking "tank" can be found at Moscow's Kubinka museum (known there as "Item 37"). It was captured from Japanese hands in 1945 after the Soviet Invasion of Manchuria. It is known to have been part of a technology transfer between Germany and Japan. The sole example at Kubinka is the only one known to have been discovered throughout the war, and any documentation found about the tank is kept closely a closely guarded secret by the Russians.

The two wheels on the side of the main structure allowed it to move, with a smaller wheel at the back to keep the vehicle stable.

The Soviets, and Russian of today, have not allowed any metallurgical samples to be taken from the tank, some sources say that only one was taken by Soviet Intelligence Officials in 1946, so we can only speculate on what it's made of. Very few facts are known about it, which are limited to:

It was powered by a single cylinder two-stroke engine
It was armed with a single MG34 machine gun (the machine gun port has been welded over by the Russians)
It was operated by a single crewman
It's armour (of unknown material) is reportedly only 5mm thick.

It is unknown when the tank was built. It may be a pre or early war design, or something cooked up towards the end of the Reich.

It's exact role is also left to speculation. People have theorised that it was a light reconnaisance vehicle, others a mobile pillbox, a cable layer for communication wires, or an artillery spotting vehicle.

It was not the only one of it's kind, ball-shaped tanks were common ideas during the interwar period 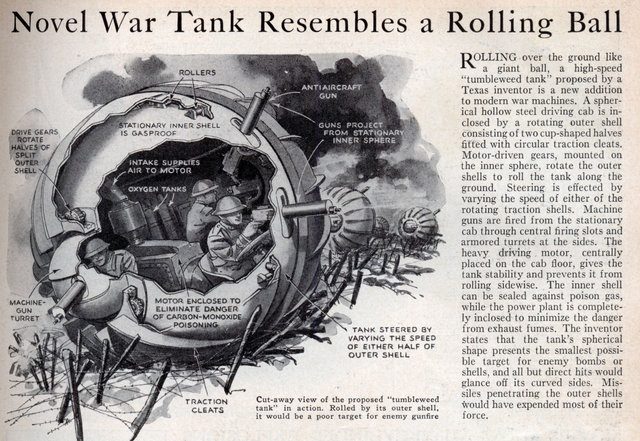 A very similar vehicle was built by Germany in 1917 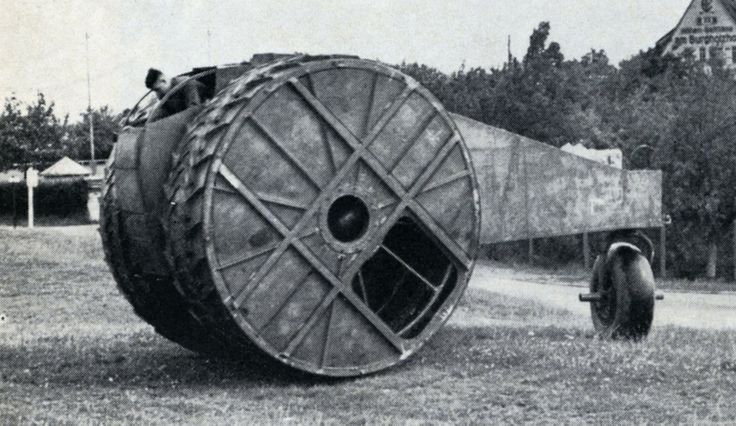 Just a strange and mysterious piece of weaponry I stumbled across years ago that I thought i'd finally share with you all. What I find most mysterious about the Kugelpanzer is the secrecy around it. Like I mentioned earlier they have never allowed outsiders to do metallurgical tests on the vehicle, nor have they ever released any documentation about it to the public.

Thanks! That is one secret Nazi weapon that didn't find its way into a book that I have about those things. It doesn't look very practical in terms of being an "all-terrain" vehicle. Perhaps the Nazis sent it to Japan as a inside joke on their ally?

posted on Jan, 17 2017 @ 05:13 AM
link
This could be either the origin of the story about the flying japanese/german foo-fighter orbs or it´s predecessor in terms of they took the design after they found a suitable energy source.

I conclude that this one in the picture was a failure because if you´re cramped inside that thing with a combustion engine, even if it´s sitting in the back, you´ll get fumes and heat in this small thing.

I shouldn't have thought so. The situation was absolutely dire for the Axis when this technology transfer happened (thought to have been in 1944). The time for joking was long past.

I hadn't heard that take on it before. It's certainly an interesting theory. I'd completely forgotten about the foo fighter orbs.
edit on -060006am1kam by Ohanka because: (no reason given)

I doubt the technology transfer story. There would be documents about it, as Nazis were obsessed with documenting things.

It could as well be something that someone welded together in his backyard. Especially the tiny support wheel makes me question the stability and handling characteristics of this vehicle.

Btw the 1917 vehicle was derived from a tractor and scrapped in the same year due to its awful handling.

In 1944 Japan requested a huge technology transfer, which included working models or full production designs of the following:

All of which was, in some degree, even if just blueprints, delivered on. It's one of the few known facts about the vehicle that it was manufactured in Germany and shipped to Japan. Most think it was built by Krupp.

There's no documents available to the public regarding this vehicle at all. If they exist the Russians are keeping them under lock.
edit on -060006am1kam by Ohanka because: (no reason given)

could you please explain what exactly is " mysterious "

Because it is. I do not throw in my speculation, but speculation from other sources. Why was it built? what was it for? nobody knows.

Of course the most mundane answer is it was a "test of concept". But that doesn't explain why it was sent to Japan, or why the Soviets captured it from the field in Manchuria.

It's pretty big judging by those radiators in the background, all I can think of is it's an antipersonnel vehicle, a test of the metal would go a long way in seeing what weaponry it could defend well against.

Again, all I can think of is an anti-infantry type vehicle, considering the losses by the Axis come 1944 it's possible that 3-4 of these is better than a light tank or troops with similar armament without armor.

In the right scenario, such as a small arms engagement this could prove useful.

I mean grenades are useful too but are useless engaging an enemy further away than you can throw.

I'd hop in that thing if I had reason enough to believe my enemy has little to pierce the armor. But other than that I'm stumped.

It's mysterious because little information exists that the public can access.

How is it flawed? Nobody knows what these things were designed for, it could be designed for swampy terrain for all we know.

It's a mystery, therefore mysterious.

Very interesting! Thanks for the post, I'd never heard of the Kugelpanzer.

I hadn't seen the 1917 tank either but the configuration is reminiscent of the Russian Tsar Tank from 1914 (which proved an abysmal failure). Arms races always give rise to crazy prototypes and countless other scrapped projects that never get past the blueprint phase but the WWI-WWII era seems to have been the golden age for bizarre war machine designs.

posted on Jan, 17 2017 @ 10:29 AM
link
I wouldn`t really call it a tank I doubt it could withstand anything more than small arms fire.
even a close miss from a mortar would probably tip it over, very limited line of sight you can`t see anything behind you, next to you or above you.

It looks like there is a bracket above the rear wheel maybe something attached to it and they used the vehicle to clear barbed wire.
edit on 17-1-2017 by Tardacus because: (no reason given)

Amen to that, this site has definitely had its share off political posts these last few months.

posted on Mar, 2 2017 @ 11:58 PM
link
I could throw out a wild speculation that likely would utterly strain the credulity of most posters beyond the breaking point. In a way though it's a very attractive speculation because it would tie up several things into a very pretty but disturbing package. (To include why Kubinka has let at least one author take measurements of the device to get fairly accurate dimensions, yet I have never seen anywhere a weight listed for the object, and their insistence on no testing metallurgical samples. It may also explain why it's "only" got 5mm thickness hide)

For this speculation to be right though, it would require you to believe that both the Nazi and Japanese A bomb projects were much more advanced than conventional sources claim. (I believe this for some very good reasons, but I also very much see why others would not. Thus, not interested in debating THAT!)

Finally, I'll preface this by saying that the speculation is based on vehicles and operations concepts developed by the Americans and Russians to allow infantry to move around a nuclear battlefield. In combination with the unsavory fact that the Japanese and Nazis both did tons of barbaric and inhuman experiments on captives that may have given them an appreciation for the health effects of fallout etc arrived at much later by the American and Soviet nations.

What if this was a nuclear battlefield battle damage assessment vehicle meant to protect the occupant more from the toxic environment than enemy heavy weapons?

It could explain everything right down to the mg34 self protection machine gun!

Coupled with the fact that the Germans also manufactured and heavily used in the east a one man machine gun bunker that could have an axle slipped through it and a pair of wheels installed for ease of towing and transport to the installation site!

Taken as a holistic package, it almost makes sense that the puzzle pieces fit together this way

So off the bat, metallurgical samples don't really matter as it is obviously built with metals found here in Earth since they built it.

It obviously was also a poor design since we only have this example of it. I could say right now that an easily employable deterrent to this particular vehicle would be an uneven barrier of any sort. Once on its side it would be useless.

Germans definitely were ahead of the time from a weaponry standpoint as far as coming up with new designs, but many failed...this being one.

Either way, it's a cool piece of history!