Kind of a silly conversation and one I don't believe would happen in real life, but if a patient refuses to believe they have testicles, they are free to not have them treated for cancer. It is their body after all, and their decision.

However, if a transgender person who hasn't had the sex reassignment surgery goes to an oncologist for treatment for their cancerous testicles, it would be unethical for the doctor to refuse, dontcha think?

If someone has just gotten a cancer diagnosis, I don't think they'd be worried about what gender they were called.

Ah you want a blanket you appear triggered.
I suggest stop having a tantrum and look deeper into the reasons why texas does #e like this many want a theocracy it appears.
edit on 2-1-2017 by testingtesting because: (no reason given)

I have never had that happen, yes I would have a major issue with that.

originally posted by: testingtesting
a reply to: loNeNLI

Ah you want a blanket you appear triggered.

Then calm down and discuss like an adult.
Also did you even read the link? it has everything to do with peoples religious beliefs....
edit on 2-1-2017 by testingtesting because: (no reason given)

originally posted by: testingtesting
a reply to: loNeNLI

Then calm down and discuss like an adult.
Also did you even read the link? it has everything to do with peoples religious beliefs....


If people don't find it frightening that religious beliefs can dictate patient treatment with the aid of laws then I must be in the wrong country. I thought this was a secular nation.
edit on 2-1-2017 by luthier because: (no reason given)

No it makes no sense. If you have a still have man parts, use the mens room. If you are dressed as a women and no one knows, how could it be an issue.

Now when when the guy with a 2 day beard wants to use the little girls room is where the trouble has started. And it will happen because the Law says it's OK.

Or would he feel comfortable with someone who looks like this in the women's room with his 7 year old daughter? 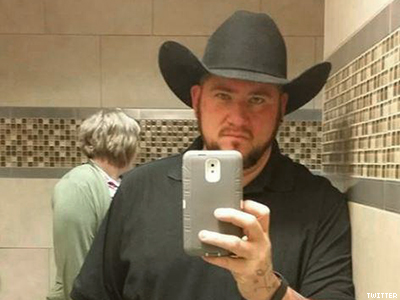 The person in the pic would feel much more comfortable in the men's room, but won't be able to if the Christian Taliban get their way.

The govt is secular to a point. Our country is very inclusive, and saying it is secular is silly.

Actually that is very far from the truth.

The trouble started in schools with religious parents.

If you are some kind of orthodox religion you should be able to get a voucher and go to a religious school.

There you can be taught about creationism or whatever belief you have.

Otherwise stfu. You live in a society. Some of those people are different than you.

I go to Europe often my wife is polish. Decades ago they had unisex bathrooms.

Really ever read the forefathers?

See if you can guess who wrote this...


"I have examined all the known superstitions of the world, and I do not find in our particular superstition of Christianity one redeeming feature. They are all alike founded on fables and mythology. Millions of innocent men, women and children, since the introduction of Christianity, have been burnt, tortured, fined and imprisoned. What has been the effect of this coercion? To make one half the world fools and the other half hypocrites; to support roguery and error all over the earth."

posted on Jan, 2 2017 @ 01:14 PM
link
if it's the same policy, it would have also prohibited those catholic hospitals from holding their religious convictions above the health and welfare of women with problems in their pregnancy.
although I really ain't into the transgender rights bit, I really do think it's very wrong to deny a women suffering cancer a tubal litigation during her c-section that her doctor feels is necessary making her chose either going to a different hospital, possible a hundred miles from home, late in her pregnancy and settling for a doctor that isn't as familiar with her overall health or having to endure an extra operation of which her condition adds to the risks of that! and that is just one example of how the religious beliefs can place women in danger!

None issue. There have been women-men and men-women using restrooms since they were offered.

It is now in vogue to wear it on your sleeve. He-(she) could obviously use the mens restroom.

Let me remind you this issue was brought by the religious response to losing gay marriage and transgenders gaining legal rights. Not the other way around.

I have a close friend 12 year marine vet in NC with a transgender child. He has never voted liberal in his life. He voted against there governor who lost based on this issue.
edit on 2-1-2017 by luthier because: (no reason given)

There are unisex bathrooms all over the US.

Do you think that someone says add a bathroom one fall out of the ceiling? It is VERY expensive to add a unisex bathroom.

And ask any man with his 5 year old daughter is a 35 year old man that calls himself a women wants to use the same bathroom as his d year old. Good luck with that.

Patient" "excuse me Im a female, stop with your binary oppression"

Doctor: "Mam you have testicular cancer"

Patient: "Ugh I already told you im female, its Science, gender is fluid"

Doctor: "well science says you have testicles , which men have and they are cancerous"

Patient: "Stop forcing your beliefs on me"


Did you have fun making this up? You seem to be of the opinion that trans people aren't in touch with reality and you obviously don't understand the difference between sex (male/female) and gender (man/woman).


The 2015 U.S. Transgender Survey can be downloaded here. The full version of this report is 302 pages long, far more I'm sure than most people can comprehend.

Probably best to educate yourselves before posting unfounded opinions.

I have no issue and would never allow my 5 year old in a bathroom alone.

I am also a libertarian so before you throw out the whole liberal bs...

Yes, yes there are trans burnings every friday night in the town square. What is your point?

Is it that Christians did stupid things? Yep they did.

Did Jewish religions do stupid stuff? yep they did

Did the Muslim religion do stupid stuff? yep they did.......