Alaskans’ Cost of Staying Warm: A Thick Coat of Dirty Air (This is What Climate Regulations Do)

originally posted by: TiredofControlFreaks
a reply to: Phage

Has the EPA conducted a cost/benefit analysis for the fairbanks area.

Wait a minute, let me get this straight.... so, if it costs too much to have clean air, then nothing gets done, and people have to live with it? Children/adults can be sick? What the hell way to live is that? People's health is a commodity? "Sorry, it costs too much too have you well, so get sick and die."

And in the summary:


In addition, it does not include any requirements associated with wood heaters or other wood-burning appliances that are already in use. The EPA continues to encourage state, local, tribal, and consumer efforts to change out (replace) older heaters with newer, cleaner, more efficient heaters, but that is not part of this Federal rulemaking. T

Now in this article, the veterenaian is driving around in her SUV, deliberately pointing out smoke from chimneys were she believes the stoves are old. Since she sued the EPA, I have to assume that she knows that no determinations of non-attainment can be used to go after these stoves.....what is her point?

Perhaps her point is that she wants to overturn federal regulations to include residential wood stoves that she does not approve of????

Perhaps her point is that she wants to overturn federal regulations to include residential wood stoves that she does not approve of????


Damn veterinarians.
Trying to overthrow the federal government. They'll be cozying up to Cliven next!

I also found the document interesting because the cost/benefit analysis includes the "social cost of carbon" which is highly questionable and does not include the "do nothing" option.

The current more stringent standard to PM2.3 is 35 ug/m3 on daily average. Fairbanks suicide intersection daily average was only 47 ug/m3 and met the old standard.

This does appear to be case here for regulatory overload.


I thought she was using the in place legal system? Didn't she sue the EPA? Tell me, what demands have been imposed on her neighbors?
edit on 1/2/2017 by Phage because: (no reason given)

Ok - you are not that stupid but I will respond to you.

By sueing the EPA, she has forced the EPA to issue an ruling of non-atainment for the state of alaska. This will require Alaska to come into compliance or face punishment in the form of withholding of tax dollars. Since she has particularly pointed to wood burning stoves as the source of the high particulate, she is obviously hoping that Alaska will try to attain compliance somehow change state regulations to address wood burning stoves.

As to my reference to 47 ug/m3 particulate standard on a daily average, please refer to Greven's post. I mistakenly referenced it for Fairbanks but it is really for the North Pole

Phage, please stop asking questions that I know you already know the answer to - its annoying and patronizing and it doesn't reflect well on your obvious intelligence. It also doesn't advance but debate but rather it misdirects it. I know its your favorite tactic but now that it has been identified, hopefully people will start to ignore you.

Either contribute in some meaningful way or just back off

She worked as a mechanic on planes in the late 70s at Elmendorf AFB, so as an Air Force veteran, she might already have done that much time outside in the dead of winter without heat.

Do you not understand the human body cannot survive long in those temperatures?

I am well aware of the ramifications of such pollution, and am completely in support of minimizing it. I am just not in support of killing people to do so. The posted statement by the EPA indicates they aren't, either. Only Dr. Olson is, and I really don't care if she invented shirt pockets... Success does not infer a right to harm others.


By sueing the EPA, she has forced the EPA to issue an ruling of non-atainment for the state of alaska.

I don't think wood smoke is a problem at the North Pole.


It also doesn't advance but debate but rather it misdirects it.

We haven't even determined if these regulations apply to people who's primary heat source are wood burning ovens.


I sincerely hope you are correct.

Seagull said it very well above; temperatures in that range are literally deadly, to anyone not protected.

The thing about exemptions is, if the EPA can be compelled to enforce clean air standards (after already apparently determining them to be either unneeded or unenforceable, probably the latter), and the majority of the residents cannot afford more expensive heat, what options does that leave?

I repeat: the proper way to address this is to help people do better, not prove one's inhumanity to a judge.

First of all - don't argue with me, argue with Greven. It is his post.

However, here is a link for AQ monitoring in the Fairbanks area:

And Grevin is correct. The highest 2.5 particulate reading occurred in Jan at 47.1 ug/m3 on January 2

READ the OP - it specifically refers to a law suit brought against the EPA for failing to designate Fairbanks as a non-attaiment area.

here is another source


The Clean Air Act requires areas like Fairbanks that fail to meet clean air standards to bring themselves into compliance within six years of being deemed non-compliant. Fairbanks has missed this deadline—in fact, it doesn’t even have an approved plan to bring itself into compliance—and the law requires EPA now to designate the Borough as a “serious non-attainment area,” triggering stricter pollution control requirements to finally meet clean air standards. EPA has missed its deadline to re-designate the area, and the groups’ suit seeks to enforce this latest in a string of missed deadlines.

Now if you have further questions - please do your own research

originally posted by: desert
a reply to: Greven

Yeah, the air pollution is really quite bad in North Pole 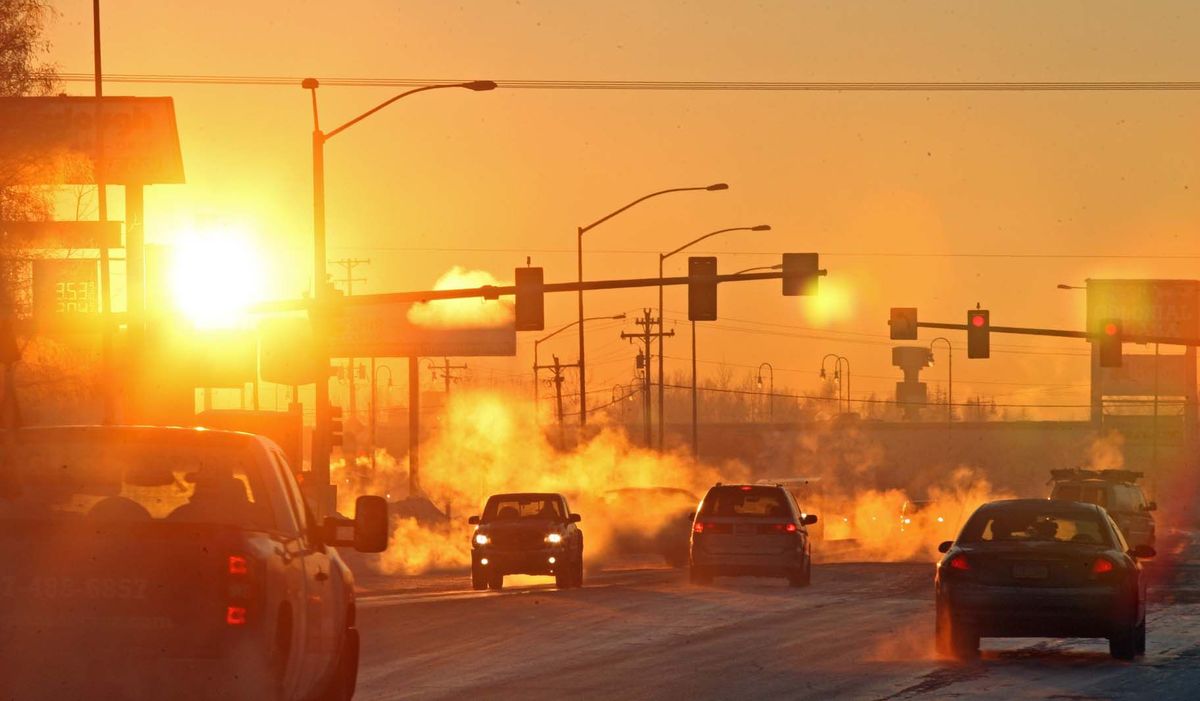 “We could smell chemicals outside the house and also coming into the room where me and my infant daughter at the time slept,” she said.

Francesco said she took multiple trips to the emergency room in the wintertime because of her daughter’s breathing problems.

“Doctors called it croup the first few times,” Francesco said. “After that, her pediatrician called it asthma.”

After the family moved, the ER visits stopped and Francesco said her daughter’s coughing fits decreased.

Take a good look at that pic. You see the 'smoke' coming out of exhaust pipes? It ain't smoke. It's ice crystals suspended in the air. I keep saying that carbon dioxide is one unchangeable byproduct of hydrocarbon combustion... the other is water.

We had something similar not long ago, when it rained extremely heavy and the temperature immediately dropped. It's called 'ice fog' around here, and can result in black ice as it settles. It's rare here, thank goodness, but in colder climates it's not so rare, and it's common around exhaust pipes even here. You're confusing water with pollution.

The pollution we are discussing is particulate matter suspended in the air. It's apparently pretty bad up there, but it's not what is shown in that pic.

We of the North are extremely familiar with this kind of "non-pollution" and recognise for what it is.


Trouble is, that "The" you put in front of it. But I guess the joke was too subtle.


READ the OP - it specifically refers to a law suit brought against the EPA for failing to designate Fairbanks as a non-attaiment area.

We of the North are extremely familiar with this kind of "non-pollution" and recognise for what it is.

So, wood smoke is not a problem. See, that's one of the questions I asked earlier. You're the first one to answer it.


The E.P.A. could declare the entire area to be in “serious” noncompliance of the Clean Air Act early next year, with potentially huge economic implications, including a cutoff of federal transportation funds.

So far the EPA has NOT and this is the third lawsuit of this nature to be brought against them for the same area. "COULD is not the same as "HAS".

We are discussing what COULD happen.

I imagine you are, and you guys have my sympathy. I despise winter down here... just call me a tropical kinda guy.

Another giveaway is the yellow tint and the low sun. That indicates the light is being ice-filtered, the same effect we get here when the clouds contain ice. Here, it typically means a good chance of hail (which unfortunately means a chance of tornadoes... or as we call them, Al Gore wanna-be's).

Uh, yes, that white stuff that comes out of my car exhaust on cold Winter mornings looks like that, too. I'm talking about the other stuff in the air. beyond the cars.... and I ought to know, because, living in California, I see the other stuff, too. Air pollution.

Let's try this pix from Fairbanks 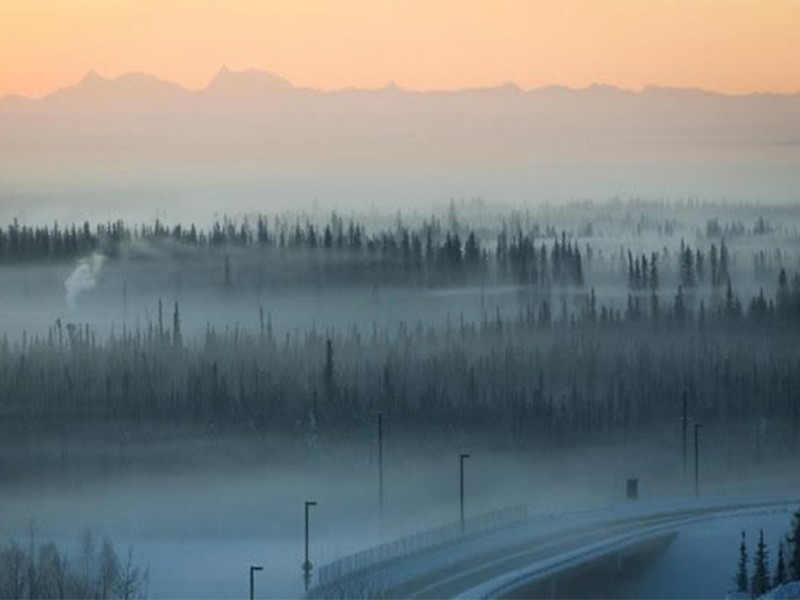 Thanks for that post because the pic looks like a normal winter day here in Colorado. I had wondered why the pic was even posted in the first place, clearly this is what it looks like on a COLD DAY anywhere... Sheesh...