Lesser Known Mysteries VII: The Lemp Family, the Curse and the Caves

page: 1
28
log in
join
share:
theantediluvian
+6 more
posted on Nov, 23 2016 @ 09:12 PM
link
For this the seventh installment of Lesser Known Mysteries, I bring to you something I actually wrote up for the most part a year or two ago. I "rediscovered" my notes/partial OP serendipitously while looking for an unrelated image. While not quite as lesser known as I prefer, it appears there's never been a thread about the Lemps on ATS and so I dusted it off, fixed it up and made (I hope) a decent OP out of it. Enjoy!

From colonial times through to the mid-19th century, ales were the dominant U.S. beers. This all changed with the arrival of large waves of German immigrants who brought with them a tradition of lagering. One of the many places where these German immigrants settled was St. Louis. Situated on the banks of the Mississippi, St. Louis is home to a large complex of natural caves whose cool temperature proved to be excellent lagering cellars just like the ones German brewers had been using for centuries. 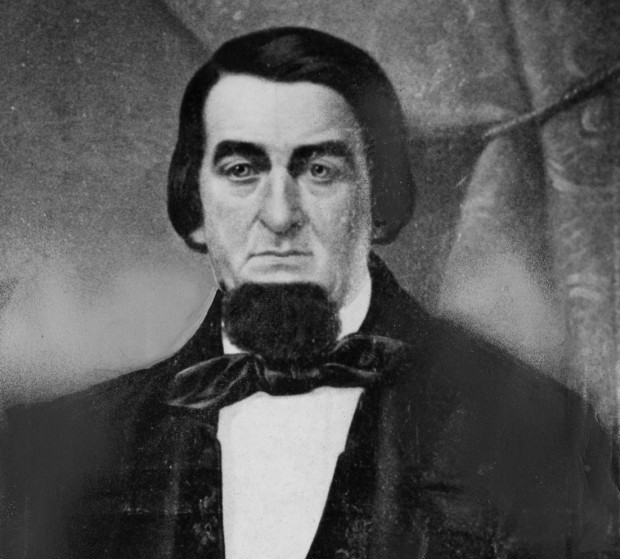 One of these early breweries, the Western Brewery, was founded in 1840 by Johann "Adam" Lemp. For two years Lemp tried his hand as a grocer before realizing that the beer he was making was his store's biggest seller and deciding to shift his focus to brewing. Lemp prospered and by the time of his death in 1862, his was one of the most successful of the dozens of burgeoning breweries. Son William J. Lemp Sr. took over the brewery after his father's death and through hard work and innovation, turned Western Brewery into the largest brewery in St. Louis. As the busines grew, so did the operation which was expanded above part of what would become known commercially as [i[Cherokee Cave[/], outfitting chambers for industrial lagering. This became the Lemp Brewing Complex which survives to this day.

In 1892, William J. Lemp Sr. founded the William J. Lemp Brewing Company from the former Western Brewery, with himself as President and his son William Jr. as Vice President. The business continued its track, driven by innovation, its once famouse Falstaff brand, transported in refrigerated rail cars, the company's once famous Falstaff brand was the first to have national distribution. 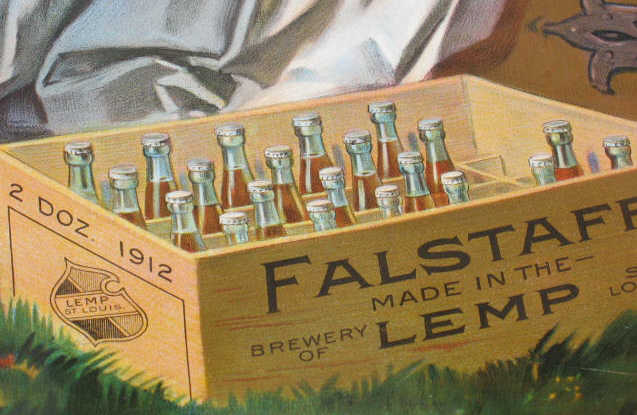 In 1876, William Sr. and his wife Julia moved into an Italianate mansion built in 1868 by her father Jacob Feickert. The couple had five children: William Jr. ("Billy"), Edwin, Charles, Frederick and Elsa. As they grew their family, the Lemps also grew their home — down through St. Louis soil — undertaking a series of subterranean construction projects.

Large vaults were built for securing the family's possessions when they were out of town. A tunnel was dug to connect the mansion to the brewery. Later, when the Lemp's brewery began to use refrigeration, large areas of the cave were converted into an entertainment space which included a heated pool, ballroom and vaudeville theater. It suffices to say that life and business were good for the Lemps in the final decades of the 19th century. 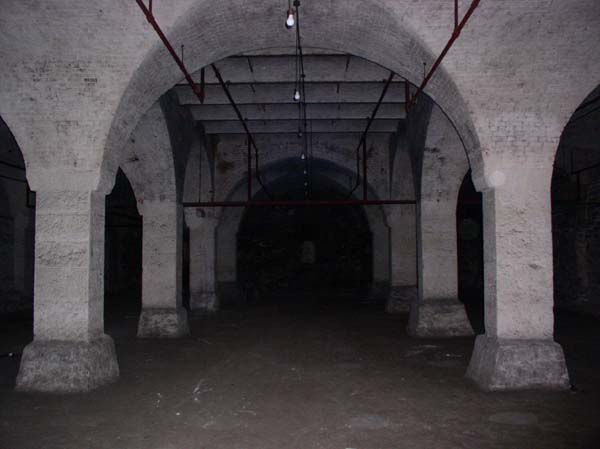 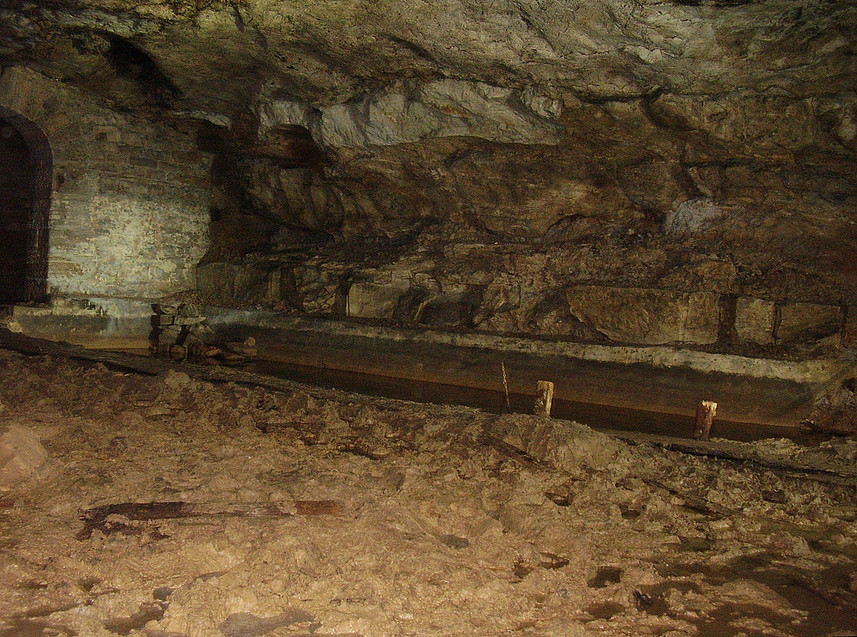 What remains of one of the Lemp's spring fed pools
edit on 2016-11-23 by theantediluvian because: (no reason given) 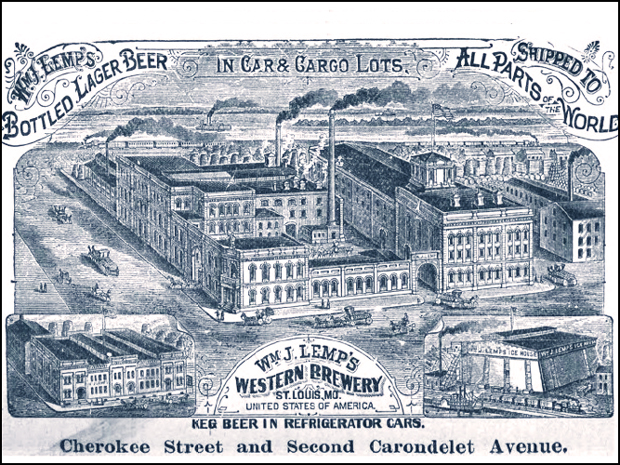 The fortunes of the Lemp family began to change in 1901 when the youngest son, Frederick, died from an undiagnosed heart condition. The untimely death of Frederick was hard on the couple and William Sr. grew despondent, his mental state declining. The final blow was seemingly struck a few years later when William Sr's best friend and fellow brewer, Frederick Pabst, died. Less than a month later, William J. Lemp Sr. committed suicide by gunshot on the morning of on February 13, 1904.

The following year, matriarch Julia was diagnosed with cancer. She died at home in 1906. In November of the same year, Billy assumed control of the family business and it was not long thereafter, that he went through a bitter divorce. Though not living in the mansion, Billy had some of the rooms converted into offices in 1911. These were the years leading up to prohibition and the temperance movement and the company faced stiff competition when many of the smaller breweries began to consolidate.

The youngest of William Sr. and Julia's children, Elsa Lemp Wright had a troubled marriage. She was granted a divorce from husband Thomas in February of 1909 but the couple immediately reconciled and were remarried in March. Within weeks, on March 20th, Elsa committed suicide in bed in the couple's home at 13 Hortense Place.

1920 was the first year of prohibition and the once great Lemp Brewery was force to shutter its doors. the Falstaff brand was sold off and eventually the Lemp Brewery Complex, which still stands today, was auctioned to a shoe company for pennies on the dollar. Depressed and having been complaining of recurring headaches, Billy Lemp committed suicide with a gun — as his sister and father before him had — in his office in the Lemp Mansion on December 29, 1922,

The last of the Lemps to live in the family mansion was William Sr's third son, Charles. Charles wasn't much for the family business, instead he turned away from the family business in 1917 and dabbled in finance and politics. He moved back into the family mansion in 1929 and lived there with his dog and two servants. On May 10, 1949, Charles was found dead in his bed, with a .38 caliber Army Colt revolver in his right hand. Unlike the others, Charles left a suicide note — brief as it was — which read simply: "In case I am found dead blame it on no one but me." 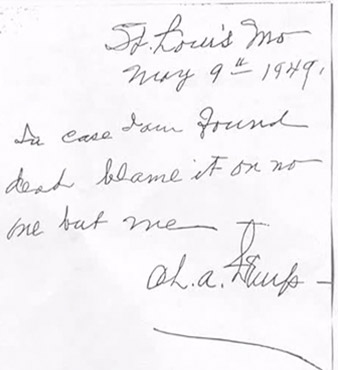 The last remaining child of William Lemp Sr., Edwin, who had walked away from the family business in 1913, died of natural causes in 1970 at the age of 90. Per his wishes, his collection of paintings and all of the Lemp heirlooms and papers he possessed were burned in a bonfire upon his death. 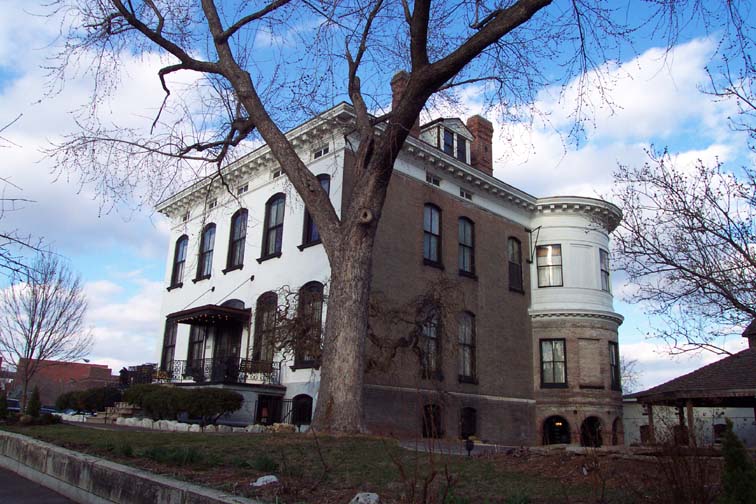 After the death of Charles Lemp, the mansion was sold and became a boarding house. It was rumored that the house was haunted and tenants were hard to keep. In 1975, Dick Pointer purchased the home and it was completely remodeled. From Praire Ghosts:

The bulk of the remodeling was done in the 1970s and during this time, workers reported strange things happening in the house, leading many to believe the place was haunted. Reports often varied between feelings of being watched, vanishing tools and strange sounds. Many of the workers actually left the job site and never came back.

Since the restaurant has opened, staff members also have had their own odd experiences. Glasses have been seen to lift off the bar and fly through the air; sounds are often heard that do not have explanation and some have even glimpsed actual apparitions who appear and vanish at will. In addition, many customers and visitors to the house report some pretty weird incidents. It is said that doors lock and unlock on their own; the piano in the bar plays by itself; voices and sounds come from nowhere; and even the spirit of the "Lavender Lady" has been spotted on occasion.

The house has also attracted ghost hunters from around the country, who have come partly due to a November 1980 LIFE magazine article, which named the Lemp Mansion as "one of the most haunted houses in America". It remains a popular place for dinner and spirits today.

The current owner of the house, Paul Pointer, maintains the place as a wonderful eating and lodging establishment and takes the ghosts as just another part of the strange mansion. "People come here expecting to experience weird things," he said, " and fortunately for us, they are rarely disappointed.."

From the Lemp Mansion's Wikipedia page:

According to local legend, Lemp Mansion is haunted by spirits. According to the Missouri History Museum, Life magazine included the Lemp mansion in an article on America’s nine most haunted houses in 1980.[5]

One spirit called "the monkey faced boy" is said to be William's illegitimate son, Zeke, born with Down syndrome and hidden away in the attic. A variation of the legend states that Zeke was William's brother, born deformed or mentally disabled. No records exist to substantiate any of the claims.

I'd originally intended to do a section on Cherokee Cave (of which Lemp Cave is one part) but anything beyond three posts gets to be a bit much to read for a single OP. Perhaps in a later thread!

Recent threads that might of some interest if you enjoy the series:

A few oldies I want to shamelessly plug:

posted on Nov, 23 2016 @ 09:30 PM
link
Excellent summary of the Lemp history. I live in STL area and the weird vibe from that home is pretty obvious. The cave system adds a little intrigue of course, but my research has let me know that cave systems were used in many metro's for storing alcoholic beverages. Not sure if they were any different on that regard. Still though, it is sad/odd that so many in that family died by their own hand. We can only wonder why.

PS, I have never heard of the Cherokee cave!

I've got notes somewhere but IIRC, it operated from the 50's through to construction of Interstate 55. It seems like it was a pretty big affair at some point. From what I remember, there were fossils also discovered in part of the cave. 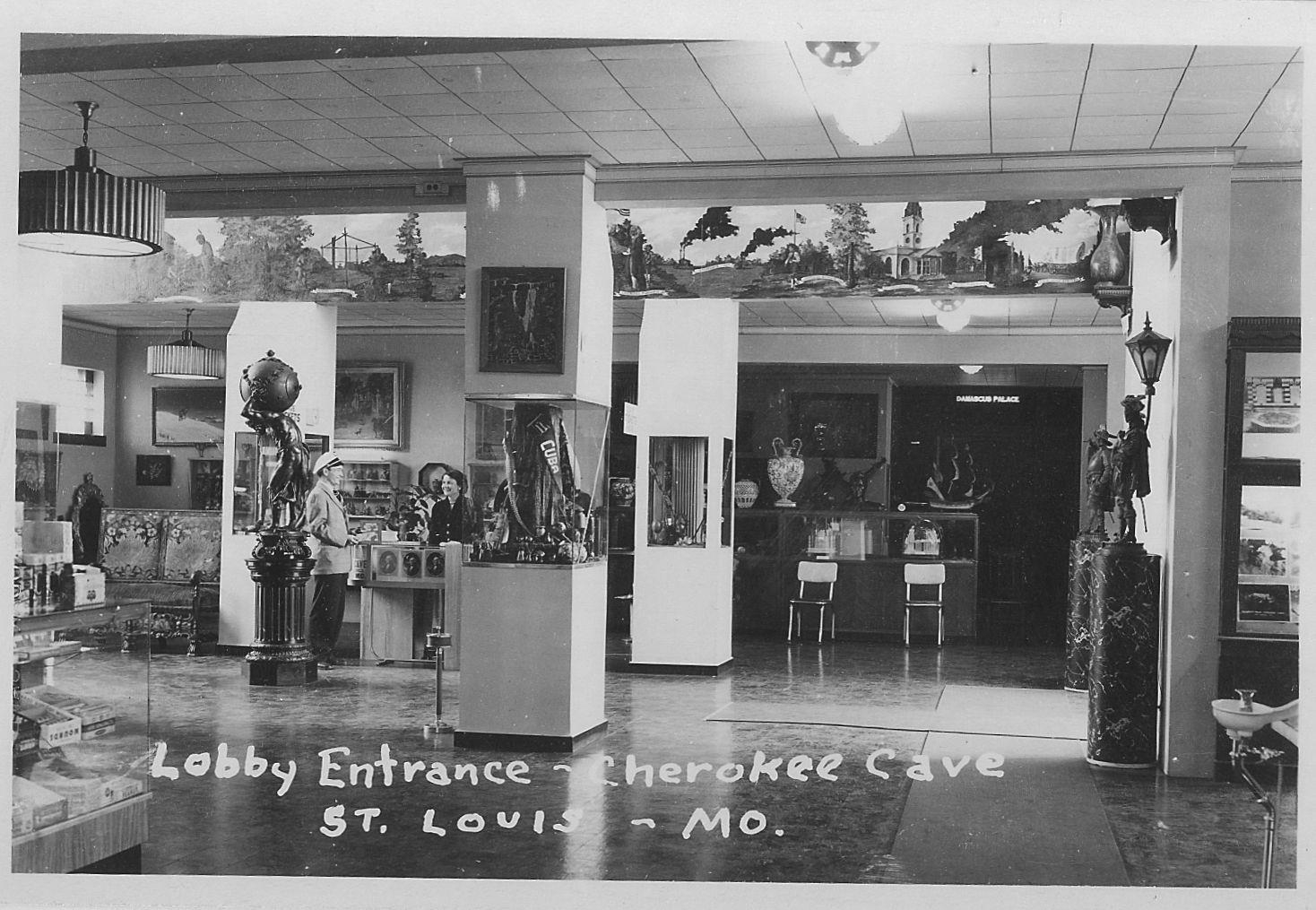 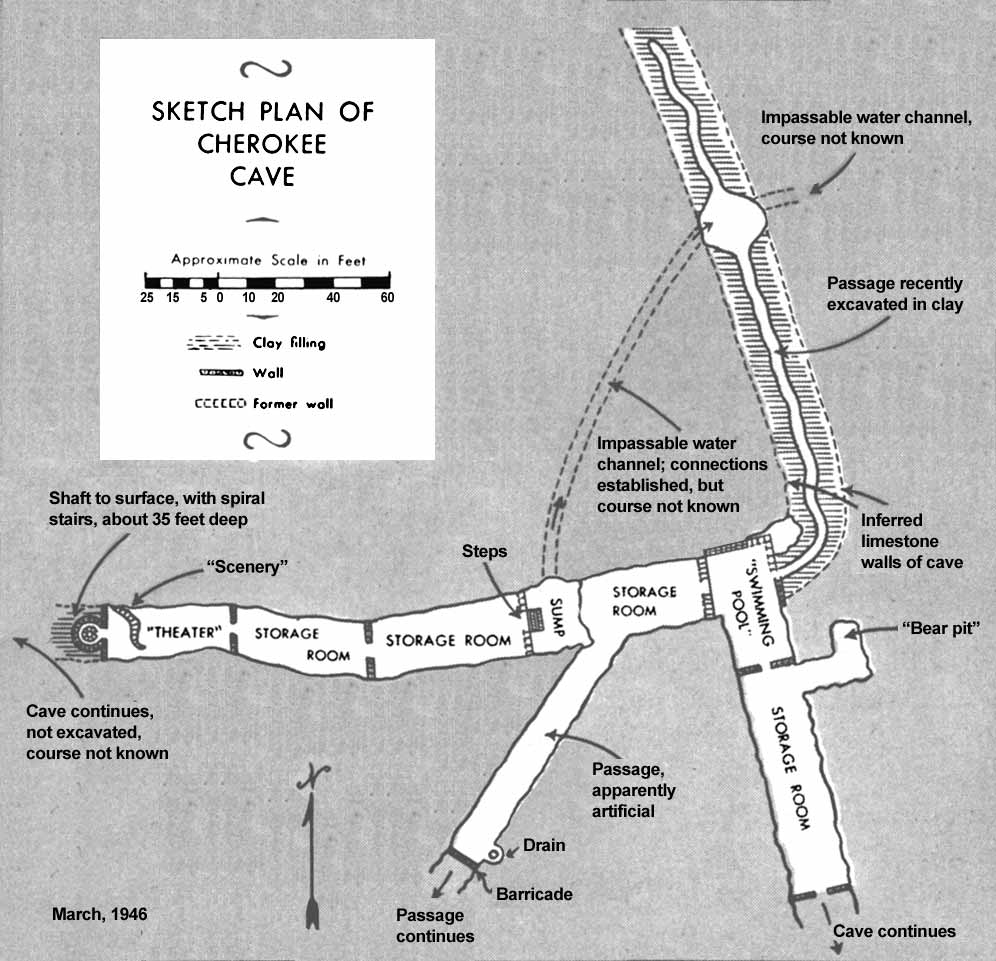 The cave is still there (the pictures in the OP are fairly recent). In the map, you can see the spiral staircase on the left. I believe the top of that staircase is in the Lemp Mansion basement.

I believe what was demolished was the entrace/lobby/parking area.

Sometimes it's your turn in the barrel.

I walked the friggin city ‘mongst the friggin ‘alt an’ lame
And ev’ry time I raised ’em up, they got knocked down again
‘Cause the love of God comes down to men a friggin curious way
But when a man is marked for love, that love is here to stay

Another great installment in the series mon ami!

And thanks for the "shameless plugs" links - I never would have found them otherwise.

Sometimes it's your turn in the barrel.

I walked the friggin city ‘mongst the friggin ‘alt an’ lame
And ev’ry time I raised ’em up, they got knocked down again
‘Cause the love of God comes down to men a friggin curious way
But when a man is marked for love, that love is here to stay

I didn't until I read Niven's "Lucifer's Hammer" and I liked it so much I checked out the author.

You do know that you and I think a little 'bent', correct?

Friggin Falcon is one of my favorites. It sort of goes along with my cynical outlook on life.


Sometimes it's your turn in the barrel.

Several barrels of great German lager beer I would think (hope). They probably realized that in heaven there ain't no beer.

originally posted by: MichiganSwampBuck
a reply to: Bedlam


Sometimes it's your turn in the barrel.

Several barrels of great German lager beer I would think (hope). They probably realized that in heaven there ain't no beer.


That's why we drink it here.

Interesting Thread! Thanx for the Share!!
I love learning something new every day, and this was a good Topic!! Syx...

There's something we can all be thankful for on Thanksgiving — Larry Niven novels!