posted on Nov, 5 2016 @ 08:05 PM
link
This just happened on live TV at the Nevada Rally. There was some sort of commotion and Donald Trump was rushed off the stage and take backstage by Secret Service.

Looks like somebody was grabbed and removed from the venue.

Dan Sciavo came out and said Trump would be coming back out shortly.

Trump is back out on stage. Looks like it may just have been somebody trying to rush the stage?
edit on 2016-11-5 by theantediluvian because: (no reason given)

Another idiot try to rush the stage?

I should hope so. This election is already third world enough as it is. We've got influence from Russia and government agents (or campaign operatives name dropping goverment agencies).

originally posted by: IWant2Believe323
Any idea what channel is covering it?

Not surprised but sounds serious.

posted on Nov, 5 2016 @ 08:11 PM
link
Yea Trump should be carful considering all the dirty efforts that have failed against him.

posted on Nov, 5 2016 @ 08:12 PM
link
Glad he is ok. Same goes for any candidate any party. That's why I hope whoever instigated the birdgogging goes to jail. It's just sick in the head to even consider doing something of that nature along with the people who took money to do it. 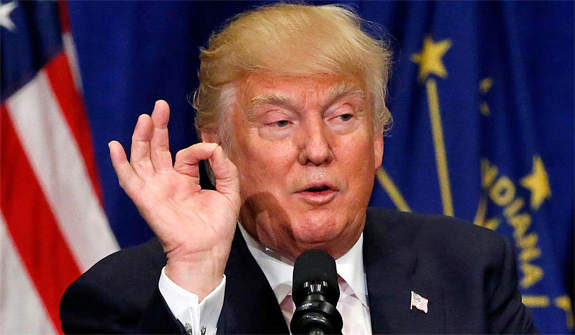 Can this crap sink any lower. So the OK sign is now the sign of the devil.

Well, I clicked knowing who the OP is so I guess I should have expected something along these lines.

posted on Nov, 5 2016 @ 08:32 PM
link
I love how the media immmediatly blew this up out of proportion. Headlines reading Trump rushed off stage amid MAJOR threat. Yes major in all caps.
Another reads, Secret service save Donald Trump from alleged threat in audience.
All i seen was some belligerent slob going to the stage, Trump covering his eyes from the light so he can see wtf is goin on, then 2 agents usher him out.

When i read major threat in a headline, I'm thinking some Bin Ladin is trying make a 4th of July, spectacle of himself. Or some bozo pulls put a machine gun and starts poppin caps into the air.
Now thats a major threat. Not some over weight Hillary supporter with high blood pressure, trying to waddle onto the stage.
Maybe im just old school.


Except Trump doesn't seem to use it in that context.

Oh wait. I see what you mean. He's signaling that he's fine. Continually. That makes sense.

The Republican nominee returned to the stage several minutes later.

At least one man was detained and carried away by police officers and Secret Service agents.

Several attendees at the rally said they saw a Trump supporter raise up a sign and then a scuffle ensued.

originally posted by: Phage
a reply to: pheonix358


Except Trump doesn't seem to use it in that context.

Oh wait. I see what you mean. He's signaling that he's fine. Continually. That makes sense.


No , he is signalling that all is well,
How long has it been since you have been out in public? If you dont know that , I would say a couple of generations at least
But I admit , it is old school.Real old school