posted on Oct, 23 2016 @ 08:26 PM
link
Wikileaks gave their promised update on Assange a bit earlier than they stated. It was supposed to be released tomorrow, but instead they released it this Sunday night: 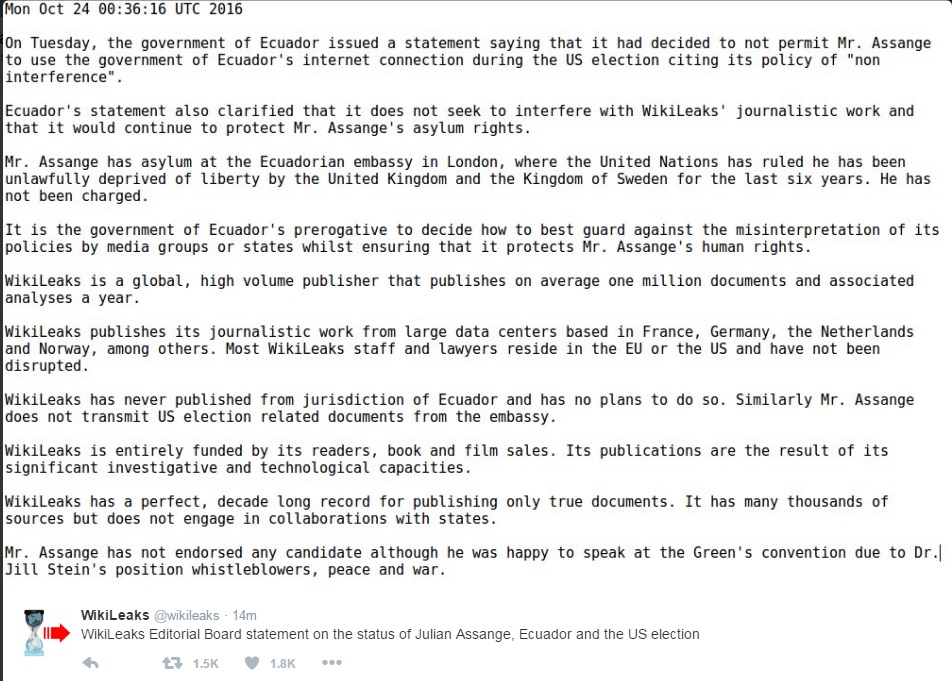 That is a lackluster update by anyone's means. They haven't provided any proof that Assange is in good health or being, instead just repeated what everyone has already known. I've been skeptical on the concept that Wikileaks has been infiltrated, but this has me concerned. Why release a statement that has no new information? Assange has been silent since Ecuador cut off his internet.

Then, the same statement goes on to say: "Ecuadors statement also clarified that it does not seek to interfere with Wikileaks journalistic work and that it would continue to protect Mr. Assanges asylum rights"

So they are silencing a journalist because they don't want his work to interfere with elections?


Below, you can see an article that questions whether Wikileaks has been compromised. They show that certain users have been blocked from Wikileaks when they suggested a simple and full proof way to prove Assange is still alive and active: 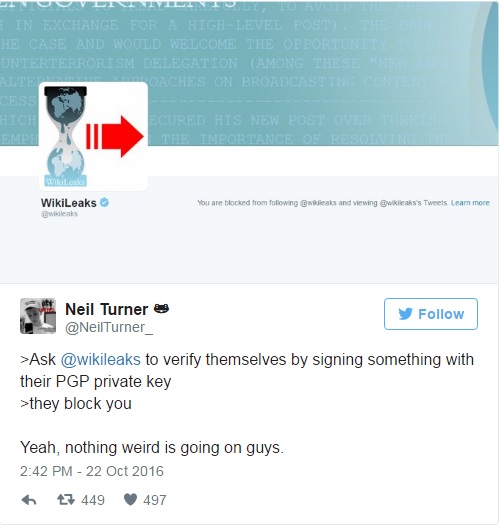 From the above link:

If I’m wrong, and @Wikileaks has not been compromised, it would be very simple for Julian Assange to appear on the balcony or produce a verifiable PGP signed statement that all is well. The longer we wait for such proof, the worse it looks.

Granted, gotnews.com isn't exactly a known site and their reliability is unknown. However, they do have a point. Assange is still a free man and could easily prove he is in good health and in control of Wikileaks. But he hasn't. Add to that; Gavin Macfadyen, Wikileaks Director, just passed away. Who is running wikileaks?

Why did they release a statement, on a Sunday night(when they said it would be tomorrow), that lacks any evidence that Assange is in good health and in control of Wikileaks?

I personally hope that Assange is in good health and is in control, but Wikileaks has done nothing to show this. Their lack proof is worrisome.

Slow on the draw, posted here

Thanks for this OP.

Lots of people who follow WL closely are confused right now. You have to admit it's been a weird week at WL HQ----with John Kerry's trip to London, Ecuador shutting off the Internet, the death of the WL director, all sorts of followers being blocked by WL on Twitter....

I'm kind of anxious to see him appear on the balcony myself.

Slow on the draw, posted here