So, there has been another (unannounced as of this time) email release by WikiLeaks today and in perusing the latest, I have found the email with the thread title as the subject line.

Just spoke to State a little more about this. A few updates.

1. The plan at the moment is for them to do this tomorrow, first thing in the morning.

This makes it apparent that the State Department continued to coordinate with the Hillary campaign on the release of the emails and kept them in the loop as to happenings before they were to occur.

That said, they are considering placing a story with a friendly at the AP (Matt Lee or Bradley Klapper), that would lay this out before the majority on the committee has a chance to realize what they have and distort it.

On that last piece, we think it would make sense to work with State and the AP to deploy the below. So assuming everyone is in agreement we'll proceed. It would be good to frame this a little, and frankly to have it break tomorrow when we'll likely be close to or in the midst of a SCOTUS decision taking over the news hyenas.

Additional confirmation of collusion between the Clinton machine and the State Department/AP in order to publish stories that spin the events the way they want. It also shows that they plan on burying the story amidst other news stories about SCOTUS.

I've seen in another thread that the number of missing Blumenthal emails had changed to 15 and all stories thereafter went with that number rater than the original 16. Hmmm, I wonder why that is?

What follows is the party line of answers, you know, the Public Face.

*OFF RECORD, if pressed on whether we are essentially admitting the > possibility that she deleted some emails:*

What follows this is the spin the plan on using to cover for the Private Face they know is the truth.

Just a minor accent in the symphony of destruction that is the U.S. political situation in the present day.

Even though they know it is Wikileaks, a mod will come along and demand a link to a story.

However, they have the "15 emails," line in their story:

According to the emails, the Clinton campaign received a heads up from the State Department shortly before the agency turned over 15 emails between Clinton and Blumenthal to the House Select Committee on Benghazi.

When the excerpt I included in the OP clearly shows they were talking about 16 undisclosed emails, why the change?

At least Law Newz has it right:

“All – In preparation for the possibility that the State Department may acknowledge as soon as [June 24, 2015] that there were 16 Sid emails missing from the 55k pages of material produced by HRC, I wanted to circulate the below draft plan for responding to the inquiries that Nick will get,” Clinton campaign aide Brian Fallon wrote.

And they went the extra step to find out if those 'friendly AP' reporters followed suit:

The next day, June 25, 2015, Associated Press writers Bradley Klapper and Matt Lee published a story on the Blumenthal emails.


edit on 15-10-2016 by jadedANDcynical because: extra link and additional comments

Why did that number change? What was in that missing email that caused it to disappear so completely?

And not a word about this anywhere except "alternative media".

It does appear that Obama administration knew all along
of his involvement, did not want him acting in an official
way but allowed him to work behind the scenes.

originally posted by: jadedANDcynical
However, they have the "15 emails," line in their story:

I noticed this, too!

Something caused that number to change and I do not believe it was simple error in reporting. No way.

The "reason" is not in the email chain, in question. I feel like it should be...or maybe it's to come in a later dump?

Actually, I definitely feel like the reason behind that number change should be somewhere in the email chain you posted in the OP.

Looking up the resultant story from the AP (Lee & Klapper co-authored it), I see it was published on June 25, 2015.

Here it is: Link

The reason for the number change SHOULD be in this email chain. And it isn't.

THIS is why I don't trust Wikileaks. I feel like the reason could have been edited out, and Wikileaks is a suspect.

ETA: By that, I mean, an entire email belonging to that chain was edited. Something about that number change really stinks.
edit on 15-10-2016 by MotherMayEye because: (no reason given)

I wonder if it was a mistake made in the process of 'controlling' these leaks.

Will the next batch show a 'correction' of this mistake, in reaction to the fact that people noticed? Will we find a simple explanation within the next batch, like "Oh, BTW, there were only actually 15 emails from Blumenthal that were deleted. That should be corrected in this AP article, too."

I just don't want to miss any clues if Wikileaks is serving as a controlled distraction.

Yeah, you aren't the only one who's ears have been perked up due to this.

Looking a bit close I find: 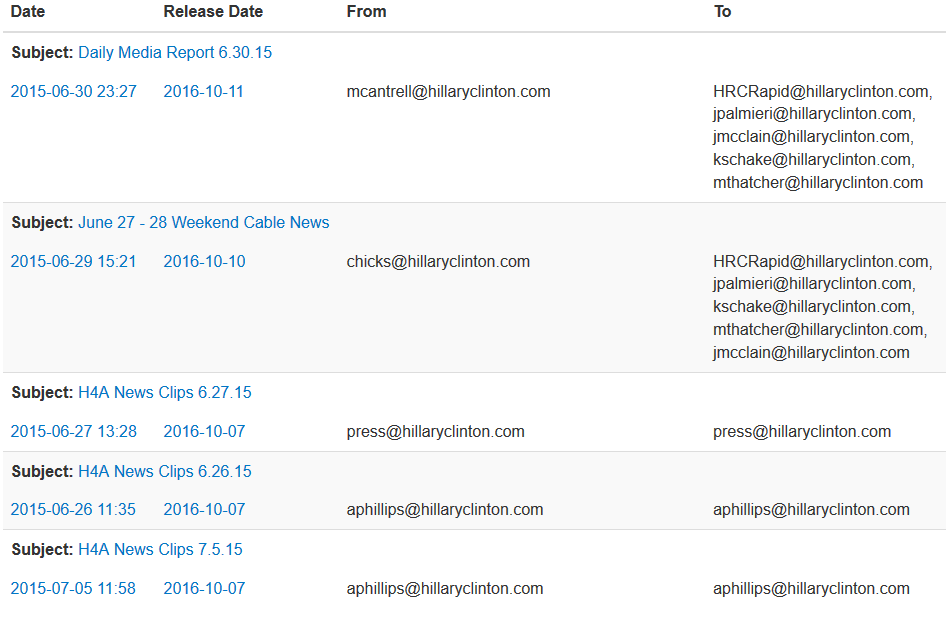 June 24 and 25 are the dates of the two emails which reference 16 emails, all other date after this time.

This gives us a time frame in which the change was made.

The one from Mills to Samuelson discusses the story they're going to give if asked about Sid's emails:

I think the point can be made via noting that Sid was not a federal employee as needed (which as FYI means his emails only b/came federal records if used in the course of Dept business - so some were if forwarded and acted on and some weren't if nothing was done with them). But not sure it is worth the technical debate.

And then it includes the one which was in the OP.

And not an explanation/rationale for the change in sight?

I'll go through them, too, but did you see one?

It stands to reason that SOMEONE discussed the change and it should appear somewhere in these emails.

ETA: I see now that, NO, there is no explanation.

Don't you find that very suspicious?
edit on 15-10-2016 by MotherMayEye because: (no reason given)

There are a couple of references out in the wild of the web that do refer to 16 emails:

Other articles tell the story of a Romanian hacker named "Guccifer," the fellow indicted for publishing purloined documents of former - President Bush, Colin Powell, and Sidney Blumenthal. In his trail authorities uncovered 16 emails from Blumenthal to Clinton while Clinton had only turned over 9.

May 5, 2016: 36 more Clinton emails are publicly released, suggesting many more still to come.

Near as I can tell, all other news stories reference 15 emails from Sidney.

There could indeed be something here.

Even that second reference goes with 15 emails as the 'official story,' from what I gather.

Perhaps something in the missing email that implicates Obama?

After all, no one wants to touch anything that comes anywhere near the notion that Obama may have been involved in Hillary's shenanigans. And that included Chaffetz and Gowdy.
edit on 15-10-2016 by jadedANDcynical because: more

I was just reviewing exactly what you were. Something happened to change that number.

I don't know what to make of it exactly and I'm not ready to speculate...other than "Why is the rationale for the change in the number of emails missing from this leak?"

Could have to do with Obama, but I think Hillary is the most sacred cow here because of the upcoming election. She is the Chosen One.