The Fly That Landed on Clinton during the Debate Found Dead !!! 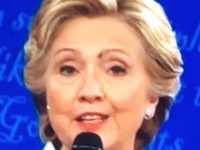 The fly (Marty) that landed on Sec.Clinton's face during the debate was found dead.

Immediately after the event the Clinton Campaign refused to comment.

Marty's family called it very suspicious and buzzed around all the politicians in protest.

One minute he's sitting on what he mistook as garbage.

The next minute he's dead. Swatted twice in the head.

Was it a baby fly.
Second

originally posted by: Wide-Eyes
a reply to: whyamIhere

Hell, it's a conspiracy

originally posted by: Wide-Eyes
a reply to: whyamIhere


What is the old saying about what flies gather around ?

The Whitehouse suspects the fly was trained by Putin himself.
edit on 10-10-2016 by Deny Arrogance because: (no reason given)

I heard the fly swatter was apprehended and is currently in custody. The recently deceased left behind two larvae and his family is pressuring congress to tighten it's fly swatter laws.

Think of the LARVAE!

posted on Oct, 10 2016 @ 09:20 AM
link
A fun little conspiracy. Trump knowing Hillary wears adult diapers, smuggled in and let loose a fly in a very successful attempt to troll Hillary knowing full well the fly would be attracted to Hillary's diaper stink.

posted on Oct, 10 2016 @ 10:38 AM
link
The fly comes out from her hair and melts back into her face. I was amazed to see this last night during the debate, but not surprised since I've experienced various "evil" signs in researching Hillary this past year, including the loudest crack of thunder I've ever heard just outside my window one day when I typed, "Is Hillary the Anitchrist" into a web browser...

Proboscis out for Marty!

I really need to invest in a bumper sticker printer.