Congress Now Blaming Obama For Its Embarrassing Override Of His Veto

page: 1
39
<<   2  3  4 >>
log in
join
share:
Benevolent Heretic
+24 more
posted on Sep, 30 2016 @ 08:56 AM
link
Two days ago, Congress overwhelmingly passed an override of Obama's veto, which denied 9/11 families the right to sue the country of Saudi Arabia for the deaths and injuries they suffered. Obama vetoed this measure for very good reasons and was vocal about his reasons and even spoke to members of Congress about his concerns that such a law would "open a can of worms" that would allow other country's citizens to sue the US government AND would cause friction between the US and its allies.

Obama pleaded with Congress not to override his upcoming veto, so much that Republicans accused him of doing too much to kill the bill. In April of this year, John Corwyn (R-Texas), criticized Obama, saying,

“Unfortunately, the administration has worked to undercut progress of this legislation at every turn. It appears that the Obama administration is pulling out all the stops to keep this bill from moving forward before the president’s visit to Riyadh,” he said. “I wish the President and his aides would spend as much time and energy working with us in a bipartisan manner as they have working against us trying to prevent victims of terrorism from receiving the justice they deserve.”

Yes, Obama spent a lot of time and energy trying to stop this ridiculous and possibly dangerous legislation... But Congress didn't listen. Instead, they participated in an emotional power play and overrode Obama's veto. So, now, 9/11 families can sue Saudi Arabia.

Well, now, 2 days later, realizing the possible history-making, negative effects of what they've done (which Obama profusely warned them about), Congress is having "buyer's remorse" and they need someone to blame for their own thoughtlessness. Hmmm... Looks like the target is their favorite one... Obama!

Even 28 lawmakers who had just helped to pass the first override of Obama’s presidency sent a letter to their own leaders Thursday saying maybe there should be changes.

“I think it was just a ball dropped,” McConnell added. “I wish the president — I hate to blame everything on him, and I don’t — but it would have been helpful had he, uh, we had a discussion about this much earlier than last week.”

Interestingly, Obama's been discussing it since at least April. That's not "last week", Mitch.

I read about this earlier. McConnell and co. really have no shame. Pond scum is more dignified than they are.

originally posted by: crazyewok
a reply to: Benevolent Heretic

I don't know where you've been for 13 years, but we have "hit" the ME a time or two. Read the OP. Congress already regrets the veto and are working to change the law.

Weather this bill is a good or bad thing seems to be more about the right thing to do .Especially if justice and victims matter . Maybe its a choice that will have ramifications in $$ to the US but sense when has $$ or good decisions mattered with the US . Think about how this could be a good or bad decision


US officials have threatened Syria and its allies – including Russia specifically – that the collapse of a US-proposed ceasefire will lead “Gulf states” to arm militants with shoulder-fired anti-aircraft missiles. journal-neo.org...

But ,but but you say ...well that is the kind of decision that gets made when you become desperate and to hell with the kind of blow back .$$$ and lots of $$$ can be printed every day but civilians being shot out of the sky cant be priced in $$ . Its the justice that the 911 victims are after and to make sure that 911 types of things in the future have real consequences . Time to start bringing the gavel down despite the cost $$$

Yep. The Congressional response to Obama's entire Presidency in one obvious and shameful episode.

These guys are the worst. From celebrating their "victory" over Obama, to blaming him when he tried to stop them from being idiots and now they have "buyer's remorse" is just beneath the bottom of the barrel.

Xcalibur254
+9 more
posted on Sep, 30 2016 @ 09:12 AM
link
This really must be the most incompetent Congress in history. I don't get how so many people can blame Obama for this country's woes when these imbeciles are in office.

This Republican dominated Congress continues to reach new heights of stupidity. Or maybe it's venality. They are so focused on doing anything they can to obstruct or challenge Obama, consequences be damned that they've actually gone past the infuriating right on into the absurd.

They wanted this veto overridden because it would make Obama look "bad" or "weak" or whatever their goal of the day is. Now that it has been done and they've had time to sober up a little and realize just how freaking stupid they really are, now they are blaming Obama for the veto override. For #'s sake, they must be as stupid as they obviously believe everybody is.

Being a little hard on pond scum there, Krazy...

The Obama Administration is a goddamn joke....with that disclaimer out of the way: 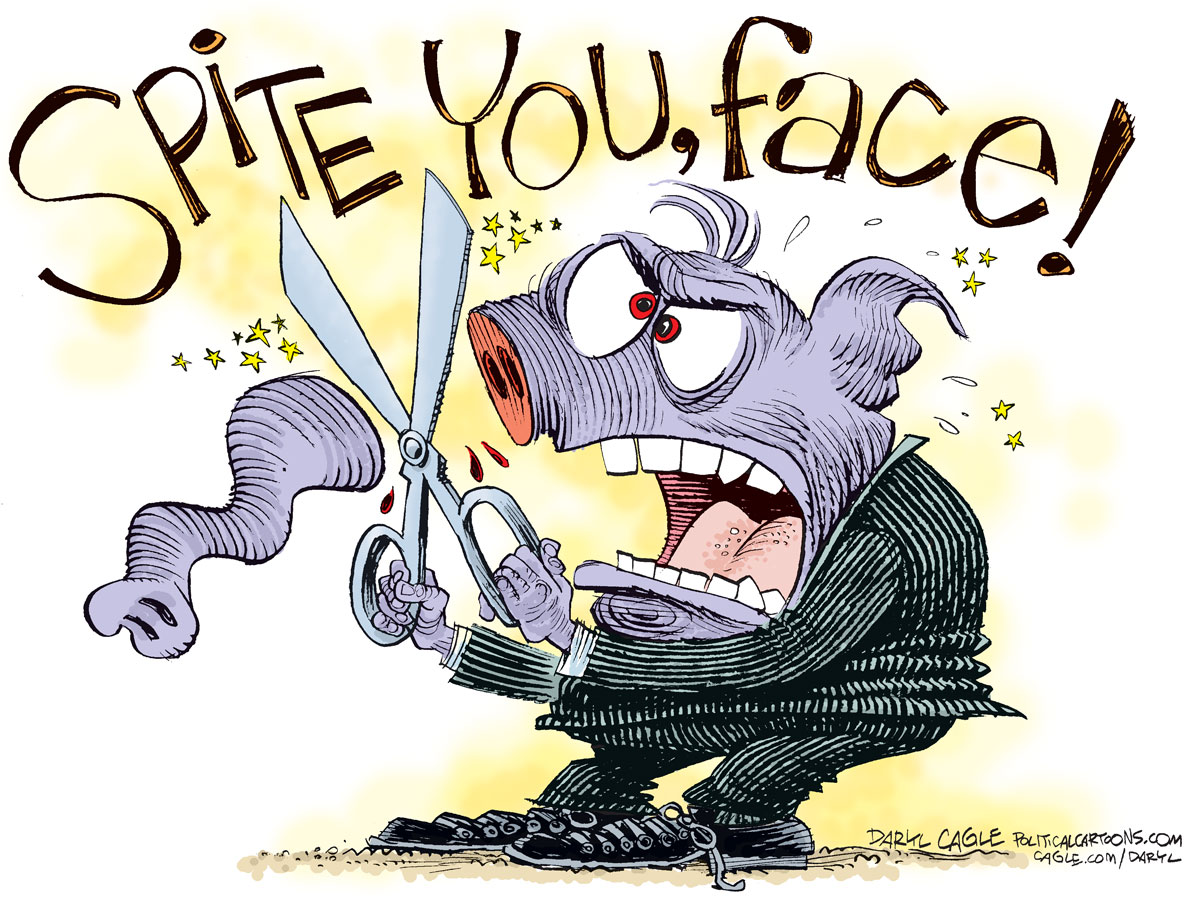 Between the House and the Senate, there are over 200 practicing Lawyers. In regards to this Veto, the level of ignorance amongst them is astounding...

He makes his handlers so proud!

Former Assistant Defense Secretary Chas Freeman warned Saudi Arabia could retaliate in ways that interfere with U.S. strategic interests, such as refusing overflight permission from Europe and Asia to the Qatari air base from where operations in Afghanistan, Iraq and Syria are orchestrated.

“The souring of relations and curtailing of official contacts that this legislation would inevitably produce could also jeopardize Saudi cooperation against anti-American terrorism,” he said.

The Saudis also could pull billions of dollars from the U.S. economy.


Congress May Be Experiencing Buyer's Remorse Over Sept. 11 Bill; Lawmakers May Address The Issue Again In November

Regardless but maybe this is still a good thing...I don't see how the saudi's would pay regardless because they can easily give the FU to the United States but the bottom line here is that countries must be held accountable for crimes that include civilian casualties...drone strikes and the like have such horrible effects on the peaceful part of any population due to "collateral damage" that it becomes acceptable.

There is more to this than just countries getting sued...it's having to slow down the war machine and the corporations losing money..we can't assassinate leaders but we can kill children who just happen to be in a kill box..

It's the military industry that will suffer in the long run and god forbid...but we can continue with the proxy wars and arm rebels covertly and accept no responsibility such as we are doing now..

This is a good start to ending our continued effort to destabilize the middle east...

Maybe you should run for presidency...we need such caring and "for the people" persons.

jjkenobi
+1 more
posted on Sep, 30 2016 @ 09:25 AM
link
Congress was given Republican majority by the people of the USA because they're sick and tired of Obama and the Democrats garbage.

Boo Hoo they aren't giving Obama everything he fricken wants.

All I see is US bashing for sticking our noses in other countries business, spending a fortune on the military industrial complex, killing people in the name of Democracy, and this bill actually holds our governments feet to the fire so to speak to NOT be so frivolous in it's actions of nation building and the collateral damage associated with it.

Let's also not forget that only 1, ONE Democrat voted with Obama on this bill!

What we are seeing are the corrupt politicians from both sides shaking in their boots because now they can be held accountable by other countries for their decisions and obedience to the globalist power brokers. They sure as hell are not accountable to their constituents, but NOW? Yea, they made a mistake all right.

Corrupt is corrupt when it comes to politicians. There is no bar of soap that erases the smell of someone who spends their lives enriching themselves at the expense of the people they represent.

I am laughing like a mad man witnessing the hypocrisy I am seeing.

originally posted by: crazyewok
a reply to: Benevolent Heretic

You and I dont agree on much , but on this you are righteous .

posted on Sep, 30 2016 @ 09:36 AM
link
They simply will not pay. Same as If millions sued the UK and USA for the Iraq war they wouldn't pay.
Just goes to show some politicians don't look at bigger pictures and vote against something only because the other side wants it passed.
You all should be taking notes and not voting these guys back in.

posted on Sep, 30 2016 @ 09:37 AM
link
To be fair, the Democrats in Congress joined right in with the Republicans, particlularly in the Senate where the vote was 97-1. It's pretty obvious that the optics of the vote became more important than the content of the bill.

originally posted by: theantediluvian
To be fair, the Democrats in Congress joined right in with the Republicans, particlularly in the Senate where the vote was 97-1. It's pretty obvious that the optics of the vote became more important than the content of the bill.

Short sighted optics which clearly demonstrate just how out of touch the Congress is with "reality."

(Whatever passes for that these days.)