I Think My Flux Capacitor Needs To Be RMA'd

If you have opened this thread hoping for something inspirational or even cogent, you are probably going to end up disappointed. The fact of the matter is that I am now two sentences into this OP and have absolutely no idea where it is headed. As things pan out I think that you will see ( and possibly agree ) that this complete lack of a coherent vision for what I want to say is actually thematically fitting. Maybe even downright poetic, all things being equal.

A few weeks ago I reached a milestone in life. Well, I suppose that is the term others would use for what happened. To me it felt less like a milestone and much like what it would probably feel like to get drunk enough to pick a bar fight with Brock Lesnar, only to have a last moment sober realization of what was about to happen to you. A sinking feeling. A feeling of unavoidable and absolutely impending doom.

The event in question... My fiftieth birthday.

All things considered, I am relatively certain that it was about a month ago that I was in my early twenties, sitting in a bar and laughing at people who were in their late thirties - saying "You're way closer to the grave than I am Grandpa". I mean it feels like it was not that long ago. The memories are still so crisp and vivid. The images still awash in total clarity.

Then it dawns on me that I have not stepped foot in a bar since sometime in the late 2007 to early 2008 range. This realization makes it all that much more shocking to me because 2007/2008? Really? Feels like last damn week...

Still. The cursed fifty day came and went without me going into too much of a panic. Age is only a number. Right? I've still got a full head of long blonde hair. Sure, there are a few lightish, whitish hairs in the temples now... but you really have to look for them to see them. I'm still in good shape and with a few sit-ups a day I could get rid of the minor "Dad bod" stomach I am currently carrying around. The young males in my world still know better than to cross me and will tell you in a heartbeat that I can and would throw them to the ground with a quickness if they ever pushed me into doing so. I'm not OLD! Nope, nope, nope, nope, NOPE!

These are the mantras that have kept me sane for the past twenty-four days. Until today that is.

Today my daughter, my youngest child, my baby.... turns eighteen. My baby is an adult as of today... And, damn it... that means that I am actually old. I am a fart. I am a grumpy old man. I am a coot. I am a curmudgeon. I can no longer deny it. I am freaking old.

I don't feel ancient. I don't have any specific memories of Moses or dinosaurs or some dude named Noah inviting me onto any boats.

Then again I do remember having a black and white television when I was really little. Not because we were poor or it was some super cheap bedroom accessory... but because that was what most people had in their living rooms at that time.

I remember the milkman coming to our house every morning and leaving milk, eggs, bread and snacks in a metal frame rack that sat on our front porch.

I remember every store in town being closed on Sunday.

I remember cops being comically overweight guys with bad mustaches and blue suits who hung out in the neighborhood rather than occupying it.

I remember when cars from Detroit were the envy of the world and I could not wait to turn sixteen so that my mom could give me her 1972 Gran Torino Sport.

I remember when sticks were toys, bicycles were the ultimate expression of freedom, curfew was "darkish". Mom and Dad left their keys in their ignitions 24/7 and we never locked the front or the back door.

I remember when "gaming" meant pulling out a box that contained a board, some small pieces of paper and metal and dice.

I remember when outside was the only place I wanted to be, not someplace that I only went if I absolutely had to.

It happened so fast! Why is science not doing anything about time, huh? I'm not saying that they should stop aging... Aging is natural. But they could figure out a way to slow time down... Because it seems like somebody turned the flux capacitor way past 1.21 gigawatts.

Or is it just me?

edit on 8/7/16 by Hefficide because: Because "bar fight" makes much more sense than "bar right"

I'll tell you what, you look really good for someone who has been breathing for 1.580083200 Billion seconds.

I feel exactly the same as I approach the big 40 mate, I have no issues with getting older and going grey in the beard but it seems that everything happened a long time ago, I still think of Angel dust by faith no more as their "new album and it is almost 25 years old???

It is not uncommon for me to start a story with "It must have been about 20 years ago..." and I am always startled by the realisation.

I have people who I call friends that I have not seen in decades and often wonder if they are no longer my friends, just distant memories?

I blame CERN myself, it's easier that way

originally posted by: Kandinsky
a reply to: Hefficide

I saw Iggy pop about 20 years ago and he was old then but still had more energy than half the guys out there that were a fraction of his age.

And I feel ya!

It will be my turn in just a couple of months.

And I totally get how you're feeling and where you're coming from!

I was just having this conversation with my parents (they're in their mid-seventies) the other day. I was talking about how fast time seems to be moving. It just seems like yesterday that my baby girl wore princess dresses and watched Disney movies - now she's turning 15 and is learning to drive. My parents both nodded their heads and smiled when they warned me, "the older you get, the faster it goes."

Thanks for the morning chuckle!
Your thread is very relatable.

Although I am not quite as old as you, I too had a mini crisis when my oldest turned 18 last year.
She will be 19 this month and my youngest will be turning 16 next month.

The years do seem to be speeding by. I laugh now at how I felt so impatient, as a youngster, to grow up. I told/tell my girls all the time to slow down, the time will come, don't be in such a hurry and enjoy your childhood. It will be gone in a flash.
During my mini (mid life?) crisis I wondered what will I do with myself when they're gone? Nearly everything I've done for the past 18 years has been about/for them.
My answer was simple and exciting. I'll do whatever I want to, live wherever I choose and laugh with them about how fast time seems to be going now that they are all grown up.

Happy belated birthday and happy day for your daughter!

Happy birthday to your daughter and yourself. 50 is the new 20. Your still young!

I still work hard every day.

I still work on my own vehicles.

I am a grandpa also.

originally posted by: Skid Mark
a reply to: Hefficide
Here's to fifty years on the right side of the dirt, you old fart.


My 23 year old stepdaughter graduating university at 23 was a hard one for me to get my head around. 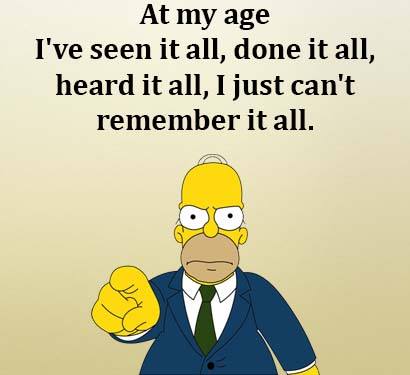 That picture pretty much sums up my 49.75 years on the planet Hefficide

Happy Birthday ya ol' geezer, and well said! I hit 40 last year, and I don't feel old, except when my back gives me trouble, but I feel the same way! The "just yesterdays" are years and decades away now!

It's funny how it feels like so much happens in such a short timeframe, and yet, things that seem so recent can also be so far away.

Life is full, sometimes it takes a look back to realize it. Start thinking of all that's transpired and those years seem impossible to have contained all they have.