This is Edward “Ed” Mezvinsky, born January 17, 1937. He is a former Democrat congressman who represented Iowa’s 1st congressional district in the United States House of Representatives for two terms, from 1973 to 1977.

He sat on the House Judiciary Committee that decided the fate of Richard Nixon.

He was outspoken saying that Nixon was a crook and a disgrace to politics and the nation and should be impeached. Hello??? Pot calling Kettle!!

He and the Clinton's were friends and very politically intertwined for many years.

In March 2001, Mezvinsky was indicted and later pleaded guilty to 31 of 69 counts of bank fraud, mail fraud, and wire fraud.After serving less than five years in federal prison, he was released in April 2008 and remains on federal probation.

To this day, he still owes $9.4 million in restitution to his victims.

So now you are saying "Big Deal"!

Well, this is Marc and Chelsea is married to Marc Mezvinsky!!! 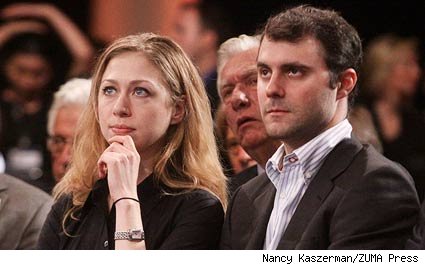 Now Marc and Chelsea are in their early thirties and purchased a 10.5 million dollar NYC apartment (after being married in George Soros’ mansion).

Has anyone heard mention of any of this in any of the media?

If this was Bush's daughter or Trumps or Palin's there would be a political firestorm! Perhaps this is why Clinton is not facing jail time! I don't know!! This is yet, another reason NOT to vote for this Criminal Witch!

And remember this little news story?

I see a DEFINITE PATTERN!! NO ONE AND I MEAN NO ONE CAN TRUST THIS FAMILY!!!

Did I mention Trump?

Also Bush. Let's talk about Bush instead. All of this stuff is meaningless if we don't bring up how it's all ok to continue doing because the last guy did it.

Still gotta vote for Hillary because of Trump. Doesn't matter if my candidate is more corrupt than Zimbabwe's Mugabe.

But it got out anyway I see.

Yes! wonder if there is anything about this guy that Asange has leaked? I mean as far as I am concerned linking these 2 articles catches he red handed with her fingers all over that dirty money!! I'm doing a little more research to see how this pans out! Of course I don't want to end up "CLINTONIZED" LOL!!

I think we should all start digging into this guys background and see how many "dots" connect and to whom!!

Great find! Now. If we could only get this played on the MSM ;-) I hope Trump's people monitor ats as there is a gold mine of talking points that could be used during a candidate debate. Points that would probably turn Clinton into a very large pile of extra runny BS.

Now all we need in star wars tradition is Saul alinsky to come out and say, "Hillary, I am your father."

I had actually wondered where Marc Mezvinsky-Clinton came from. Thanks for that!


If this was Bush's daughter or Trumps or Palin's there would be a political firestorm!

You may be a master of understatement.
edit on 26-7-2016 by bbarkow because: I removed the word "sir" because I shouldn't assume such things.

forwarding to the Trump Campaign now.

posted on Jul, 26 2016 @ 06:47 PM
link
So the son has to carry the sins of the father? What next he's descended from someone that was at the inquisition so he hates Jews too? Seeing how much money he lost it would seem that he didn't get any info from Hillary.

Thanks for sharing - I knew Chelsea's husband's name was familiar from somewhere. Now I know... Birds of a feather


it would seem that he didn't get any info from Hillary.

Not because she didn't try. His hedge fund's success was predicated on the success of the Greek economy. Guess what - Hillary was pressuring the EU to bail out Greece at the exact same time. The Foundation was involved too somehow, but I don't want to take the time to research it.

It's readily available information if you're interested in taking a look.

posted on Jul, 26 2016 @ 06:51 PM
link
Im going to vote for hillary, even if she does eat small children, because Trump must be stopped at all costs. They say that he says all Mexicans are rapists, and he wants to cut off food stamps to little babies, so they cant buy milk. He also has small hands and funny hair. And lets just face the facts here, Hillary has a D after her name.

originally posted by: buster2010
So the son has to carry the sins of the father? What next he's descended from someone that was at the inquisition so he hates Jews too? Seeing how much money he lost it would seem that he didn't get any info from Hillary.

posted on Jul, 26 2016 @ 06:53 PM
link
I have lost all faith in American Citizens in terms of voting. I've tried to understand it but it's pointless. When someone is granted more power after abusing their previous power it won't stop. They will abuse it even more! She will draw in even more three letter agencies. DOD,IRS, FBI, CIA, EPA...they will all fold. Lights out for any morsel of justice at that point. The middle class will get smashed into the ground even harder. Notice they always talk about the poor but never about real relief for the middle and upper middle who are getting brutalized. They also never define what middle class actually is, just a word. I'm upper middle after a life of being poor and working hard. Now that I somewhat made it it's even harder. Insane taxes, healthcare costs....no relief for when you actually crawl out of it the hard way. Only more hardship. System is designed to crush the middle, throw some coin at the poor and reward the wealthy.

posted on Jul, 26 2016 @ 06:55 PM
link
Dang! His indictment was two months too late. Bill could have pardoned him in January like he did all those others that were indicted for mail fraud, bank fraud, wire fraud, money laundering, and drug running. Remember "Pardongate"?

This is very interesting indeed.

How old are you? Some of us still remember the good times.

If you didn't live through them, maybe you think this is as good as it gets. Rest assured, it can get a whole lot better with good - or even marginally competent - leadership.

posted on Jul, 26 2016 @ 07:06 PM
link
I remember when she married him and then he disappeared; he cracked. Maybe it was because of all his father's problems. But the Clintons found him and hogtied him back with Chelsea and even got him a job. He really doesn't work. More than probably they have an invitro child, which is ok but that poor baby's linage. They keep him locked up. He never speaks-they are serious problems with him. And that is sad.
edit on 26-7-2016 by Justso because: (no reason given)

Does this make it any clearer? The ONLY person in that Party that showed some "class" wasn't even a "True Democrat" so the rest of the Party cheated Him out of His chance, so what does He do? Exposes His castration for all to see...

Do You see yet?

Mrs. Clinton has had Her fingers in all sorts of crap since "Tricky Dick" so for 40+ years "most" have bought into the 2 Party Paradigm, what a fricking farce... See yet??

The more one analyzes it the parties are the polar opposites of what they claim to represent. Republicans want to cut regulations, seal up the borders to give our citizens more access to entry level work and allow people to create their own businesses and thrive with tax cuts.

Democrats want to allow anybody breathing into the country. And if the illegals need something give it to them on the backs of the middle. So what if it hurts our own poor. Middle and upper middle will pay for that as well. Ramp up regulations so that nobody can open a a business. Rely on other countries for goods. Screw our own ability to make anything. Keep a large percentage of people on welfare and don't encourage them to achieve anything better.