Newt Gingrich, a leading candidate to be Donald Trump’s running mate, told Republicans at a closed-door meeting earlier this year that Trump is not a conservative, speaks to voters “at the lowest level of any candidate in either party,” and could lose in a landslide if he didn’t significantly change his approach to campaigning. Gingrich suggested Trump’s move from campaigning to governing would be challenging: “How we make the transition from, you know, language for fourth graders to real policy, I don’t know.”


Gingrich also agreed with what many Republicans during the primary process feared: “National Review’s right. Donald Trump’s not a conservative.” Instead, Gingrich characterized him as “an American nationalist” who uses a deliberately unpredictable mix of hostility against “stupidity,” liberals and political correctness.

That is a perfect analysis, but is it a sound enough political strategy to win the general election.

But if Trump does decide on Newt as his VP choice; what a volatile mix.

Donald has said he will name his VP choice tomorrow.

Every time Trump calls politicians out, they respond with the 'no,you are- but what am I' sandbox banter of children. Effective to show their true selves, but also why they (politicians) will never allow him in the Whitehouse.

He's not childish, they are.

posted on Jul, 14 2016 @ 09:57 AM
link
Trump is not a conservative in the current opinion of what they are... I would say Trump is closer to a middle of the road guy... his radical right statements are just that statements...

I am one of those that believe his running was a joke ... then his numbers took off and his ego said well heck lets go for it... since those really crazy statements have started to disappear from his speeches.

If I had to pick from the two main party choices Trump would be the easy choice for me, I think his supreme court picks would be pretty close to middle of the road.

eta: Most current Republicans are not conservatives either.... you just have to look at the power grabs the republicans backed to know they are not for smaller less intrusive govt.
edit on 14-7-2016 by Irishhaf because: additional thought

Easy, trump is a moron, sadly he is the better of the two morons up as a choice

At least Trump actually made his billions in Business, not just kissed ass for donations like the Clintons.

Who's more qualified to run the business of America, again?

An ass kisser or an earner?

Edit:Not that it matters, things already been decided.

I have to disagree with Newt when he says Trump isnt stupid.

He speaks to people on a 4th grade level because thats who he is, its his mentality.

I'm beginning to think that someone gave Donald his money.

posted on Jul, 14 2016 @ 10:05 AM
link
Ya know, when one candidate has both sides working against them, there is a good chance they are at least a little scared of whats to come. He is not a politician, he doesnt play by the traditional rules for politicians.

I would rather someone else, but I will take him over Hillary. Besides, you get the added bonus of the sheer entertainment value of a trump presidency. Also, look at all the people that are working against him, all the people any sensible person would want out of government. That is kind of a large endorsement to me.

posted on Jul, 14 2016 @ 10:18 AM
link
Know Newt well; was my polysci teacher at West Ga College and worked on his early campaigns. Brilliant, great mind but deeply flawed man. Heard him practice his speeches over and over again in the room next to me. He'd take one position and then the other, brilliantly-I was young and mesmerized; so was my family who donated heavily to his campaign. Horrible man to his wife and family-terrible one on one-he is a showman. He is an excellent strategist but carries no true soul in any argument-it's all for the win. When I finally found this out-and after many conversations with the other young collegians on his staff- I quit. I lost my love of politics for many years.
I turned down law school/I was just too naive-it broke my heart and my spirit.

I'm beginning to think that someone gave Donald his money.

I'm glad you said that Glad'. His ventures are mired in crookedness, and debt and bankruptcy. A long record of obfuscation when it comes to paying for things. It makes me think he is playboy with money, and that he really is a message boy for the hidden elite.
I have been thinking then, the same as you, and it's not as daft as it sounds.
edit on 14-7-2016 by smurfy because: Text.

He is already changing his hateful tone leading up to the convention. A bit late....but it might help getting the nomination.

Christy will sink his hopes if he chooses him as vp.

The phrase is I KNOW you are but what am I.

Hardly.
I get advice from myself.
I watch the shows.
I have a good brain.
I know more than the generals.
Believe me. 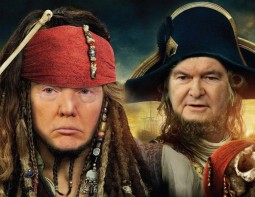 Now that the parlez's are over.

Hardly.
I get advice from myself.
I watch the shows.
I have a good brain.
I know more than the generals.
Believe me.


Well, he has to be lazy too since he hasnt been to all 57 states.

Some things are taken out of context above. Such as the full quote:


“This is not a guy who’s shallow or simple, but he is a guy who knows an immense amount about marketing, which is why he talks at a fourth-grade level. He talks at the lowest level of any candidate in either party, not because he’s stupid,” Gingrich said to the crowd of executive-level political staffers and corporate sponsors. “He does it because he knows if you talk at a fourth-grade level everybody can understand you.”

There are sadly some people who do need things explained plainly. That's just how it is.
I have heard Trump interviewed one-on-one where he sounds very intelligent, almost brilliant.
It is a talent to switch gears like he does when he talks in front of a large crowd.
Everyone needs to get the messages, even those who might be less educated.

I don't take it as talking down to people.
It seems more like he is just talking to "all" people.
He is not acting like an elite brainiac snob who talks big and turns up his nose at those considered beneath him like some politicians do.

And when he does talk like this, it does not come off as condescending as some other politicians do. I have seen Hillary "try" to adjust her level in some situations, and she comes off as if she is trying to talk down.

I think in this recording, Newt was trying to explain this. Newt understands it.

America and government are not businesses.
The man knows nothing about government at all. Zero nada zilch. He barely knows his history. He's a big dummy. Ignorant to all that matters.

The grocery store requires more knowledge from the stock boy then you guys demand of the trumpster fire.

Yeah it will be hilarious when the rest of the world stops trading with us.
It will be a real blast when our allies turn their backs on us because he's insulted every leader on the planet.
Look for China to call the note for additional ratings next spring.
Can't wait for the Emmys next year.

It's one of the reasons I'm against Gingrich as a V.P. selection. (Gingrich is right in that Trump isn't a conservative/betrayer, he is an American first and THAT is why I support him.)

He doesn't need an 'inside man' for V.P.. He can hired all the inside men he needs on a consultant basis.

Far better would be Giuliani, IMO. Or even the 'Democrat' retired general.

Trump is an off the road (wall) kind of guy.