posted on Jul, 11 2016 @ 01:27 PM
link
Most members of this forum will be familiar with J Allen Hynek’s name from the assistance he provided as an astronomer to the US Air Force’s UFO investigations or from the highly respected UFO books he later wrote. Many of you will also be aware that he founded the “Center for UFO Studies” (“CUFOS”), which states that its purpose “is to promote serious scientific interest in UFOs and their study, and to serve as an archive for reports, documents, and publications about the UFO phenomenon”.

Since 1973, CUFOS has published various journals, newsletters and other material. It also has enviable archives of documents and other items. CUFOS is currently headed by Mark Rodeghier (seen in the brief video below):


Mary Castner has also been working closely with veteran researcher Barry Greenwood and, as mentioned below, they have made scans of some of his case files available on the CUFOS website (e.g. regarding Rendlesham).

In the last few months, I have been bothering Mary Castner at CUFOS regarding the scanning of material and she has been dealing patiently (more or less) with my requests and suggestions.

Due to problems arising from a lack of communication between the Center and its Investigators, the “Center Investigators Quarterly” was started in 1977 “to introduce a quarterly bulletin that would deal only with matters concerning the Investigators, and that would provide a means for keeping in regular touch with all the people in the field”. This newsletter keep those the Center’s Investigators initially informed of things being done by CUFOS and its staff but gradually widened into comments on numerous cases and statistical analysis of UFO reports. It ceased publication in 1988.

All 24 issues of CIQ are now on part of the CUFOS website. 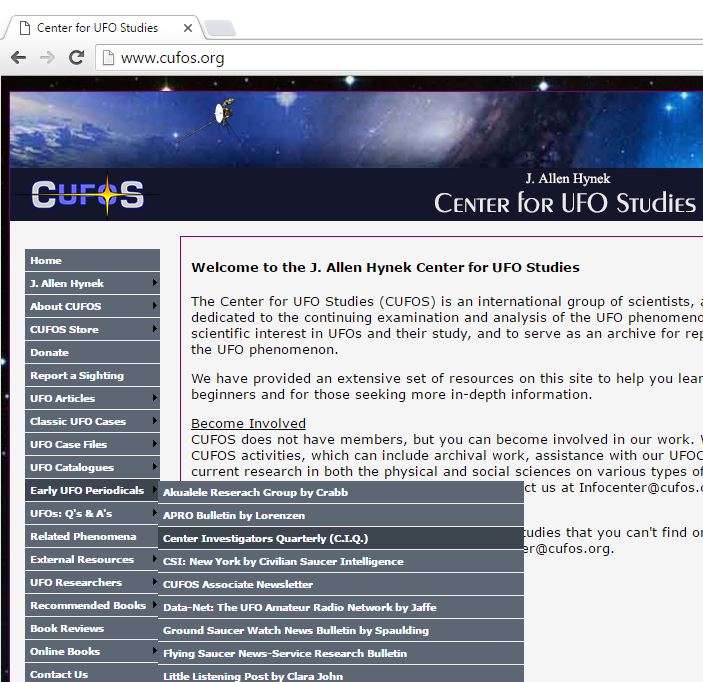 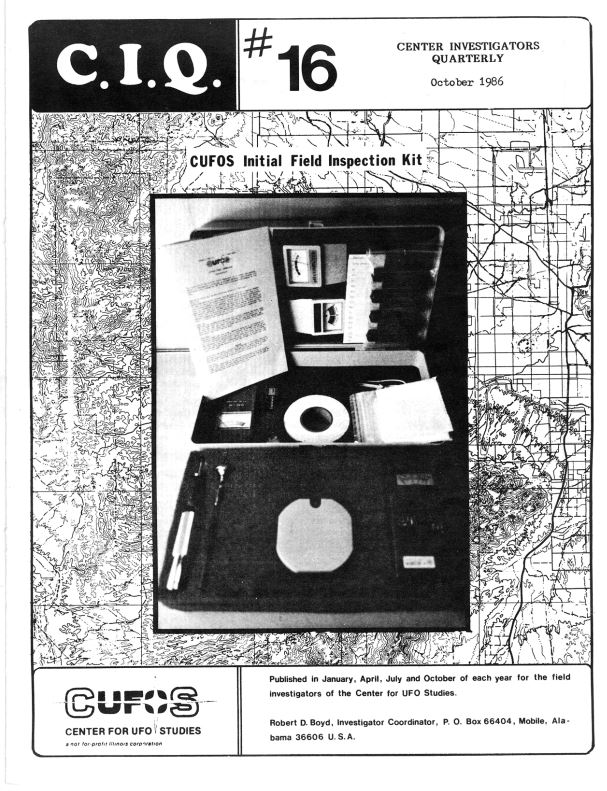 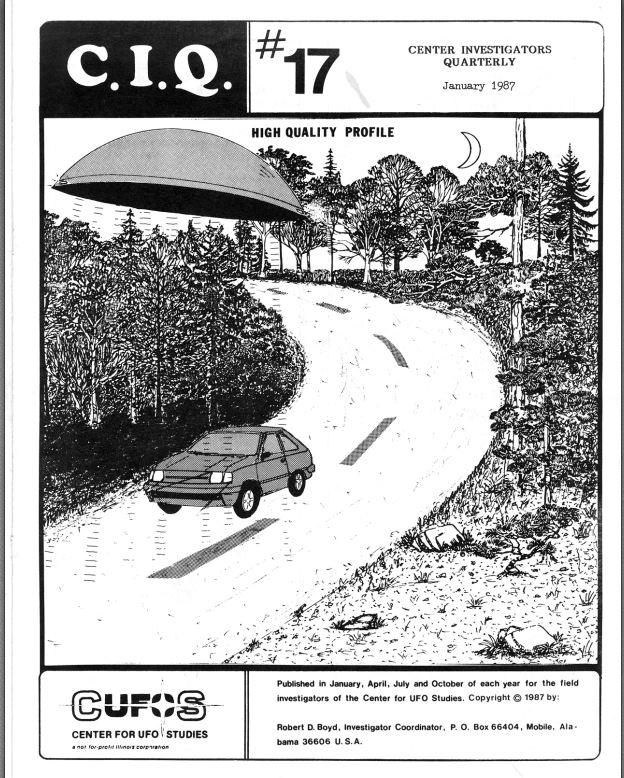 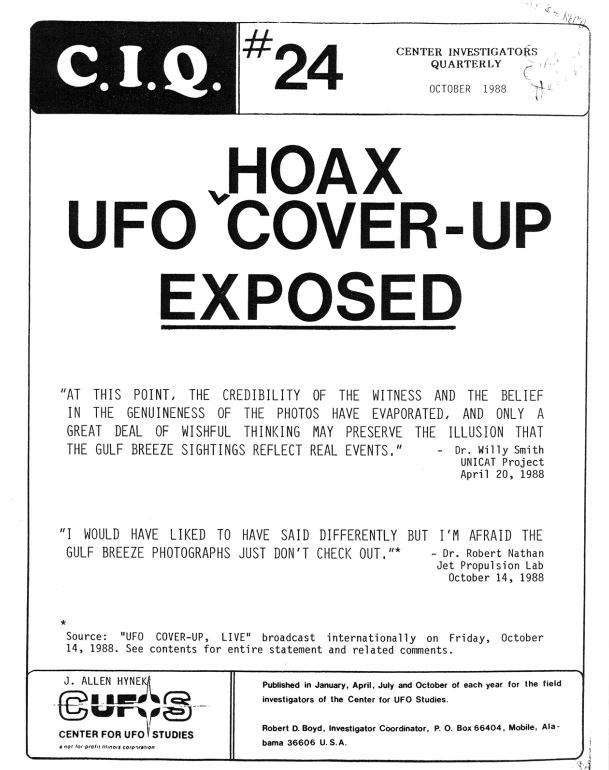 The CUFOS Associate Newsletter was another publication of the Center. It was started in 1980 “to broaden the range of information already available from CUFOS to those who are interested in keeping up-to-date on activities of the Center and news of UFO sightings and investigations not usually available elsewhere”.

34 of the 40 issues of this newsletter have been scanned by a Russian colleague, Mikhail Gershtein. I passed those issues on to CUFOS last week and the final 6 issues were scanned by the industrious Mary Castner at CUFOS. All 30 of these newsletters (in 6 “volumes”) have a permanent home on part of the CUFOS website. 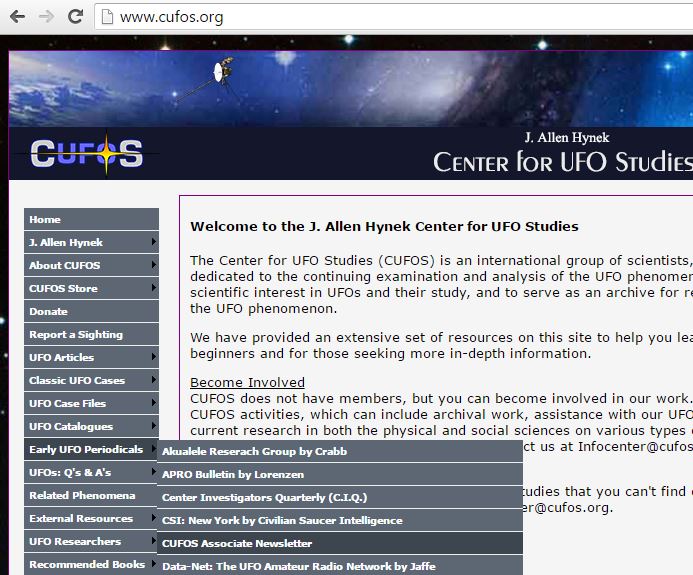 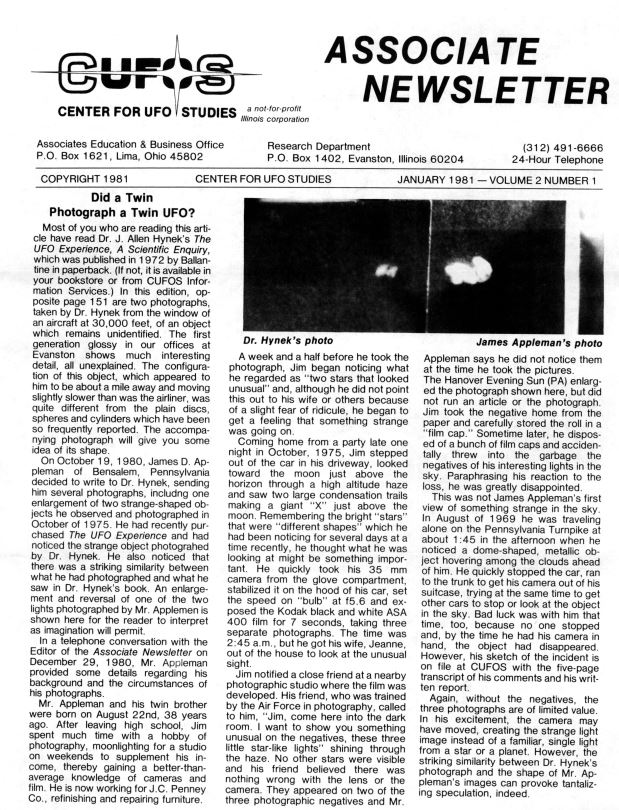 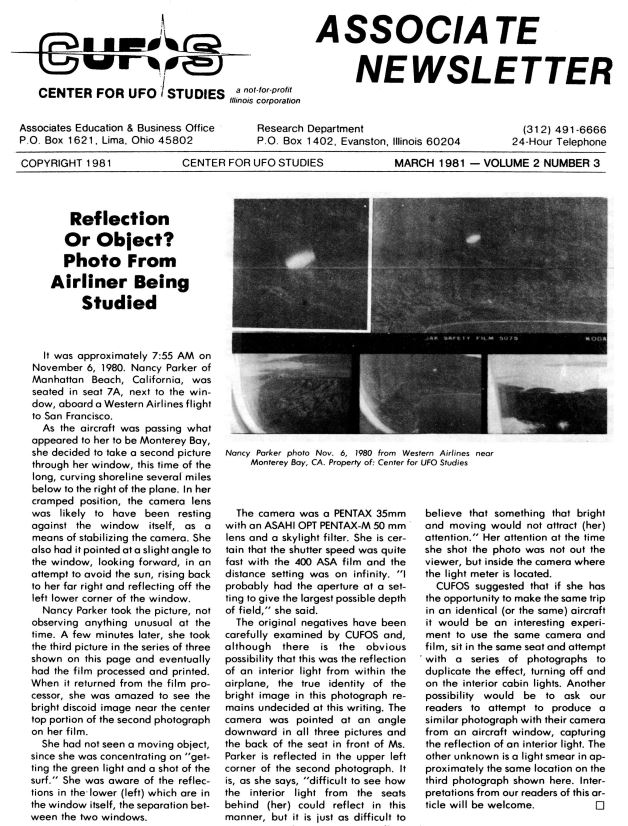 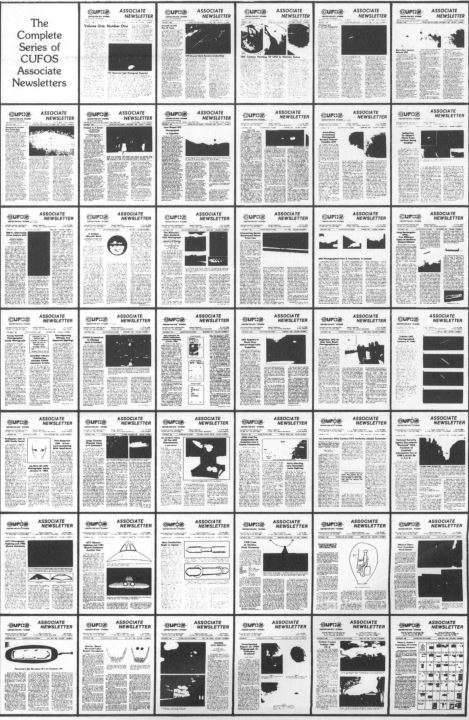 UFO Events in Spain and Portugal

While I wanted to mention these newsletters being posted this week on the CUFOS website, I’ll take the opportunity to also highlight some other resources recently uploaded to the CUFOS website.

At my request last week the AFU in Sweden kindly scanned a copy of "A Catalogue of 200 Type I UFO Events in Spain and Portugal" by Vicente-Juan Ballester Olmos, previously published by CUFOS (after V-J kindly gave his permission for that publication to appear on CUFOS’s website). As a result of that helpful work by the AFU, this publication is now on the CUFOS website at this link.

(It makes a pleasant change for UFO groups to be working together to achieve a common goal - rather than having pointless squabbles between one another...) 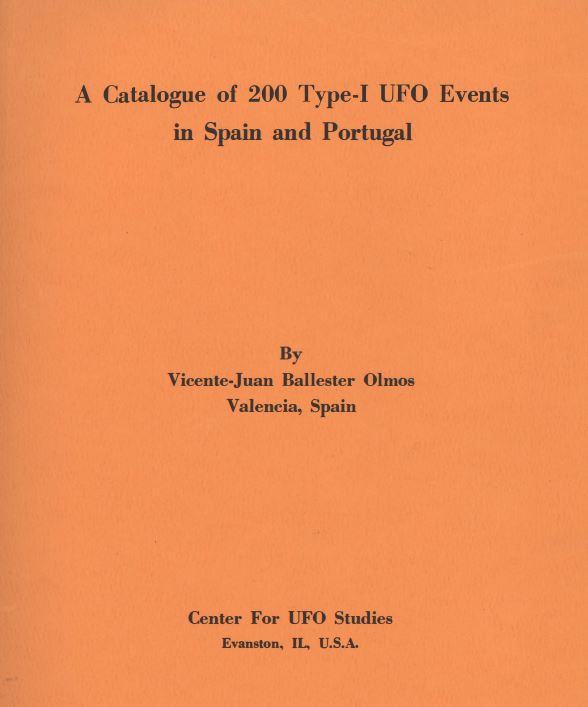 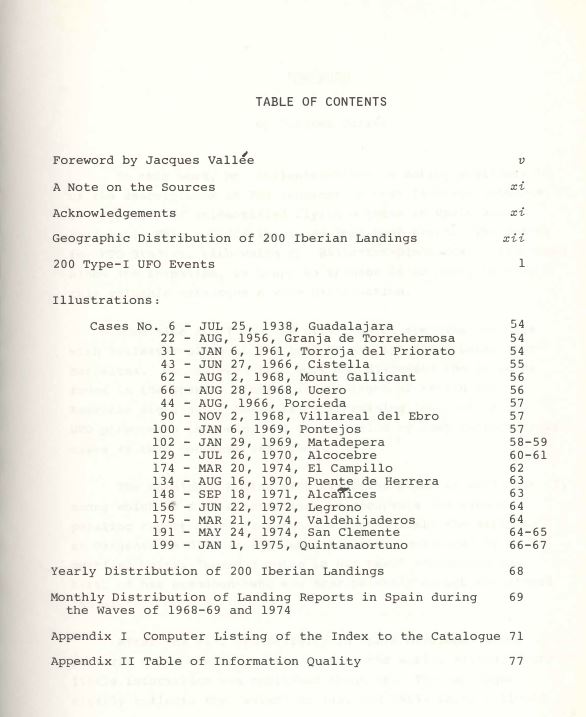 Jacques Vallee's Foreword to V-J’s publication includes (among other comments) the following:

"In this work, Mr, Ballester-Olmos is making available to us the descriptions of 200 landings or near-landings (Reports of "Type I") of unidentified flying objects in Spain and Portugal. This publication is an important event. The Center for UFO Studies, with which Mr. Ballester-Olmos has collaborated since its formation, is happy to sponsor it in order to give this valuable catalogue a wide distribution

"As a compilation of unexplained sightings, this work is impeccable. A very large majority (67%) of the cases are first-hand reports; all known mis-identifications, hoaxes and the like have been eliminated. We are left with that amazing collection of two hundred unexplained events, documented from the actual words of the witnesses--real men and women who are alive today in Spain and Portugal and have experienced these extraordinary events".

"The main result of this work, in my view, should be to dispel the idea that UFO phenomena are triggered by the press. It is a popular misconception among American scientists that UFO waves are triggered by media coverage of a particularly sensational event (such as Socorro, the "swamp-gas case" or Pascagoula) . In the U. S., it is true that television teams and newspaper reporters have often exaggerated local incidents and thus produced a "tempest in a teapot" resulting in spurious UFO waves. This phenomenon is of less significance than these scientists think, however. The majority of the Type I cases come from smaller countries where press coverage of UFOs is very poor or even non-existent. When the MAGONIA catalogue was compiled in 1968, I was able to find only a half-dozen published reports of UFO landings in Spain. It was therefore an excellent basis for an experiment to re¬ examine the local records in depth, as Mr. Ballester-Olmos has done, and to compile information from private sources. Would we find that Spain, where cultural communication with the rest of Europe has not been as intense as among other countries, had been spared the trouble of dealing with these strange events? On the contrary, Ballester-Olmos has now shown that in this culture the phenomenon followed the same patterns as in the rest of the world, although individual witnesses have not exhibited the same type of social reactions as other witnesses, and did not have the same reporting chan¬ nels available to them".

Various case files - including regarding Rendlesham

As mentioned above, the uploads by the industrious Mary Castner to the revamped CUFOS website in recent months also include various case files from veteran ufologist Barry Greenwood. I would highlight in particular Barry Greenwood’s extensive case file on Rendlesham. 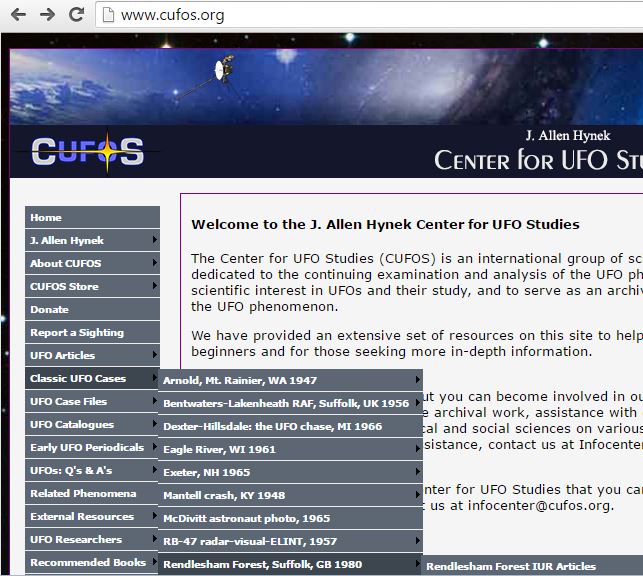 Some other files of interest, which may not be immediately obvious when looking at the menus listed on the left hand side of the CUFOS homepage, include files of material on foo-fighters: 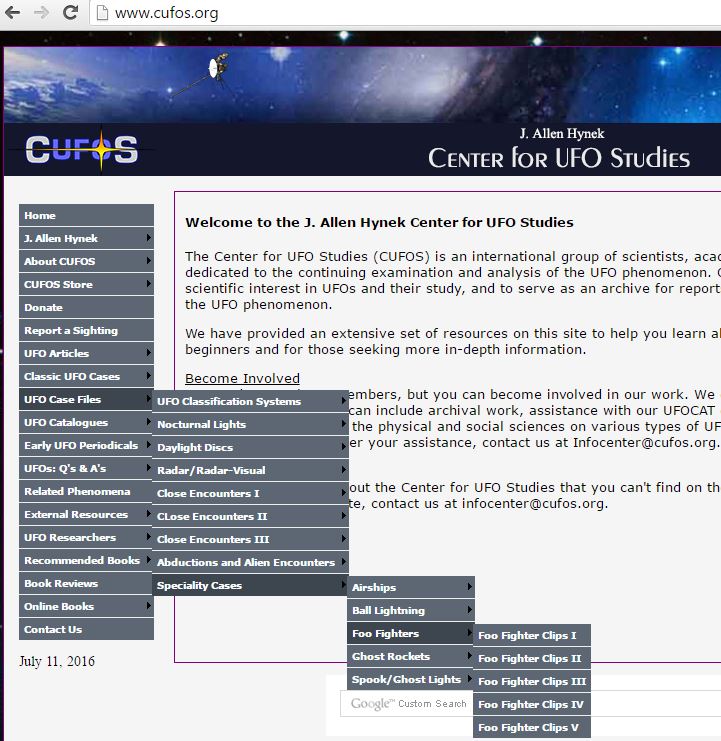 It is well worth looking through the various drop-down menus on the CUFOS website for various hidden gems.

posted on Jul, 11 2016 @ 02:28 PM
link
Much appreciated for highlighting these resources Isaac. Even if the numbers showing their appreciation seem to be dwindling.

posted on Jul, 11 2016 @ 02:38 PM
link
wow. You bring new meaning to the word thorough Issac! Very familiar with the man ( Hynek) and his work with Project Blue Book. Lots of stuff that bears more scrutiny here me thinks. Already have seen some interesting stuff from many top name investigations over the years. Need to look much more into this good stuff.

posted on Jul, 11 2016 @ 03:04 PM
link
Great news! I was unaware they were hosting this material and I'm delighted to see the other treasures such as Ground Saucer Watch issues as well as Nexus, later known as Saucer News by Jim Moseley.

One thing I noticed and wanted to point out is the Assoc. V2 #1 page with Hyneks UFO picture does not show James Applemans UFO photo.


Looks like a good scan so why is the Appleman image cutt off the page like that ?

Just wondering because I'd like to see that image!

I was just pointing out there might be something wrong with the picture scan.

If anyone is interested in the Hynek UFO photo,

More info can be found in this thread ...

Allen was aboard an airliner when he suddenly noticed a white object at his altitude, seemingly flying at the same speed as the plane. He made sure it wasnt a reflection and he convinced himself it must be some faraway cloud with an unusual shape. He pulled out his camera to see how fast he could snap pictures. In all he took two pairs of stereoscopic photographs and gave it no more thought.


The photographs themselves appeared in a book authored by Hynek and Vallee in 1975, The Edge of Reality. They may or may not be of a flying saucer, but they are certainly not clouds. The importance of stereoscopic photographs cannot be overemphasized. Such a camera is of outstanding evidentiary value. Hynek, in effect, had captured a possible Holy Grail on film.