The sex slaves the world forgot about

page: 1
25
<<   2 >>
log in
join
share:
stonerwilliam
+5 more
posted on Jul, 5 2016 @ 08:03 PM
link
At one time not long ago the Yazidis of Iraq numbered 500,000 people then in August 2014 the IS fighters descended on them like locusts Kurdish- in launguage but with a belief that combines elements of Islam, Christianity and Zoroastrianism, Islamic state saw them as heritics and vowed to destroy them one estimated is 3,000 women and girls held as sex slaves by IS


Nadia Mourad, an escapee, has appeared before the US Congress and the European Parliament to appeal for international help.

“Daesh is proud of what it’s done to the Yazidis,” she said to Parliament. “They are being used as human shields. They are not allowed to escape or flee. Probably they will be assassinated. Where is the world in all this? Where is humanity? 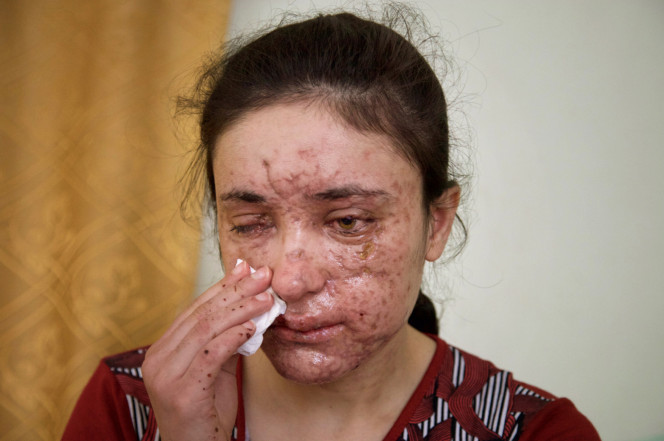 How often has the MSM told us of their hell , Instead of what the Kardashians are up to or who is running for office or what was on Hilarys servers , where were all those peace keeping troops when these people needed them , where were the soldiers to fight for them , if no boots on the ground then let them put on trainers instead Mr President


This is how history will remember our time

posted on Jul, 5 2016 @ 08:15 PM
link
I know this post is beyond rude and insensitive but this horrible thought entered my mind as a post...


Now onto the actual topic. I feel for them. These sex slaves. Its trually horrific. IS are truelly horrific. These sort of reasons are why they should be stopped and have boots placed on the ground. Or at least nuke the whole place to put everyone out of their misery. Ok that nuke comment is a bad one. But i honestly feel that throwing a few hundred thousand UN troops in there could help stop IS.

What IS do are horrific. If not boots on the ground then at least up the bombing campaign
edit on 5-7-2016 by DaRAGE because: (no reason given)

Nothing new here... been going on in Africa for decades....

Not saying it's right but money is more important.

I feel for them and all who suffer from the hands of extremists.

A big BIG problem is the moral justification since the west has been given a bad reputation due to it's interference militarily the last 15 years. It's saddening and disheartening... I've never seen a bigger need and justification for peacekeepers to be used.

UN, US, Japan... It doesn't matter if we can stop genocide we have a moral obligation to stop it.

Indecision can be the worst decision. I'd give her the biggest hug possible if I could... Nobody should suffer like that.

Nothing new here... been going on in Africa for decades....

Not saying it's right but money is more important.

I would honestly go there to fight, I'm in.

An honest smile wouldn't be a micro aggression to these women, it would be a welcome gift.

When i saw her photo it took me back a bit as she looked like a girl Claire that i knew 20 years ago , i was looking her up on Facebook a few weeks ago and she has hardly changed in that time .

It has crossed my mind in the last year also bud to get the passport out and go on a little hunting trip over there , just how to go about it and the launguage barrier is stopping me

We failed to do anything about the Rwandan massacre, I was too young to even understand suffering when that happened

Wasn't much excuse to to deny humanity back then and even less reason to deny it today.

I would join the military if I didn't already do that and hated it.

Maybe if I was a few years younger I'd try BUDS again.

Agree, but ISIS is an ideology, it is rather difficult to fight an ideology.
It would however be a good step forward if the west took a stance against islam.

I have come across articles about people from the u.k being over there fighting for the good side and silently thought why not ! but i think they get treated the same as returning isis people by the government here and age is not on my side either maybe 25-30 years ago i would have gone in a flash .

what is this BUDS ?

The sad truth here is that too many people turn a blind eye to atrocities
like this because they are afraid of being labeled a racist or islamophobe.

It's actually ok for me to say that because that's the only accepted form of hate in the world.

Unless of course your a radical than you're allowed to hate without being called out for it.

This is a common shared opinion, in my view it is far from the truth.
People are simply powerless if politicians do not act against atrocities, if they neglect to implement rules for integration and allow extremists to educate children in islam.
This is the real problem, hence Europe has been a breading ground for jihadies in the last 15 to 20 years.
Thousands have trafeled to Syria to fight for IS and at home they segregate from the western society because it is haram.

Of all the horrific things Daesh have done, the sex slaves trouble me the most. I've done a lot of research into this and all I can say is, the yazidis are some of the strongest people on the planet. I wish I could go to Syria and shoot these Daesh mother f*ckers in the balls...
edit on 6-7-2016 by Wide-Eyes because: (no reason given)

originally posted by: stonerwilliam
a reply to: earthling42

Someone in my local area(Nottingham), spraypainted a bus stop with "White people are over". I got a shiver down my spine when I saw it.

originally posted by: Wide-Eyes
a reply to: stonerwilliam

Of all the horrific things Daesh have done, the sex slaves trouble me the most. I've done a lot of research into this and all I can say is, the yazidis are some of the strongest people on the planet. I wish I could go to Syria and shoot these Daesh mother f*ckers in the balls...

You and me both bud , How the world can stand back and watch this i dont know , It is about time they did something

posted on Jul, 6 2016 @ 12:10 PM
link
This is really sad, I wish the world wasn't so corrupt and uncaring. It seems like western intervention in the middle east is only ever for their own government's gain.