posted on Jun, 18 2016 @ 01:49 PM
link
So with the release of Minecraft version 1.10 (which the version number was strange to me, normally once you hit 1.9 the next step is 2.0), I've been waiting for some of my mods to catch up with the update to be compatable. There are some very interesting things that went with the new version of Minecraft:

1) Polar Bears added - They aren't aggressive......unless you get near their cubs, then watch out! Pro tip - they can SWIM and they swim faster than you!

2) Mesa biomes now have a LOT more gold in them and have increased the level the ore spawns at, so you do not have to go that far down to find it.

3) A lot less jumping! If you've ever played Minecraft PE on a mobile device, you know you get to simply walk up to tiered blocks and you automatically walk up them, where as in the PC version of MC, we have to spam the heck out of the space bar to get up. Well not anymore! You can now simply walk right up and up you go!

4) You can now use your fishing pole on entities and draw you to them. Dropped your diamond sword down a hole? You can use that fishing pole to snag it back!

Those were the biggies for me.

Finally Optifine released an updated version for MC 1.10, which is important for me because without it, my shaders for MC do not work. Well while cruising the internet, I found a mod that adds bump mapping to the very texture pack that I'm using. Allow me to show you the differences with these screen shots. How I did this I'll explain further down.

First, here is a shot of MC Vanilla, no texture packs, no shaders, just the regular game at the village that Josh and I have taken up residence in: 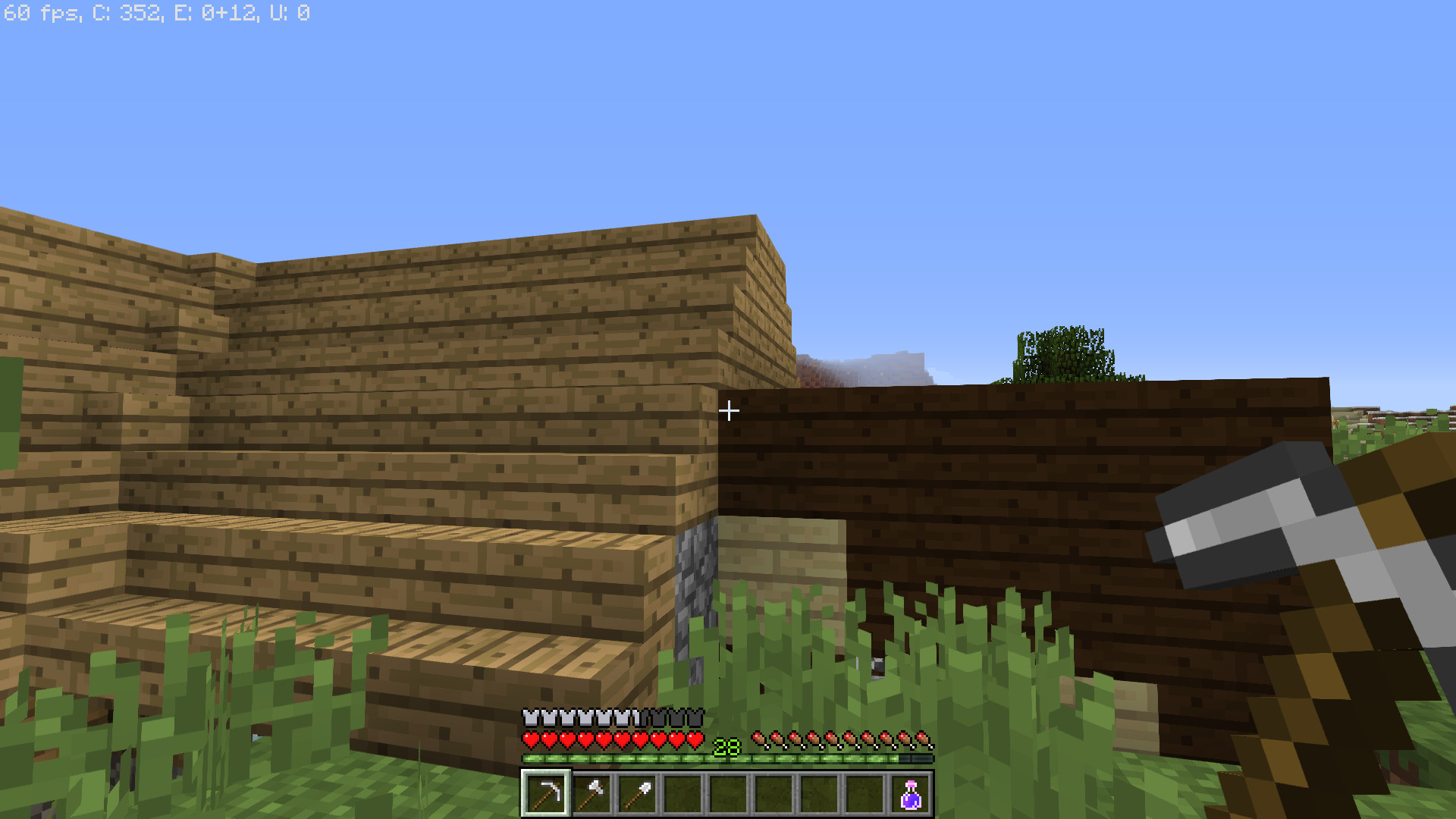 Now I always like to use different texture packs. My favorite right now is the S&K Realism texture pack. It's still a work in progress, and I'll be glad when they finish it. But here it is applied: 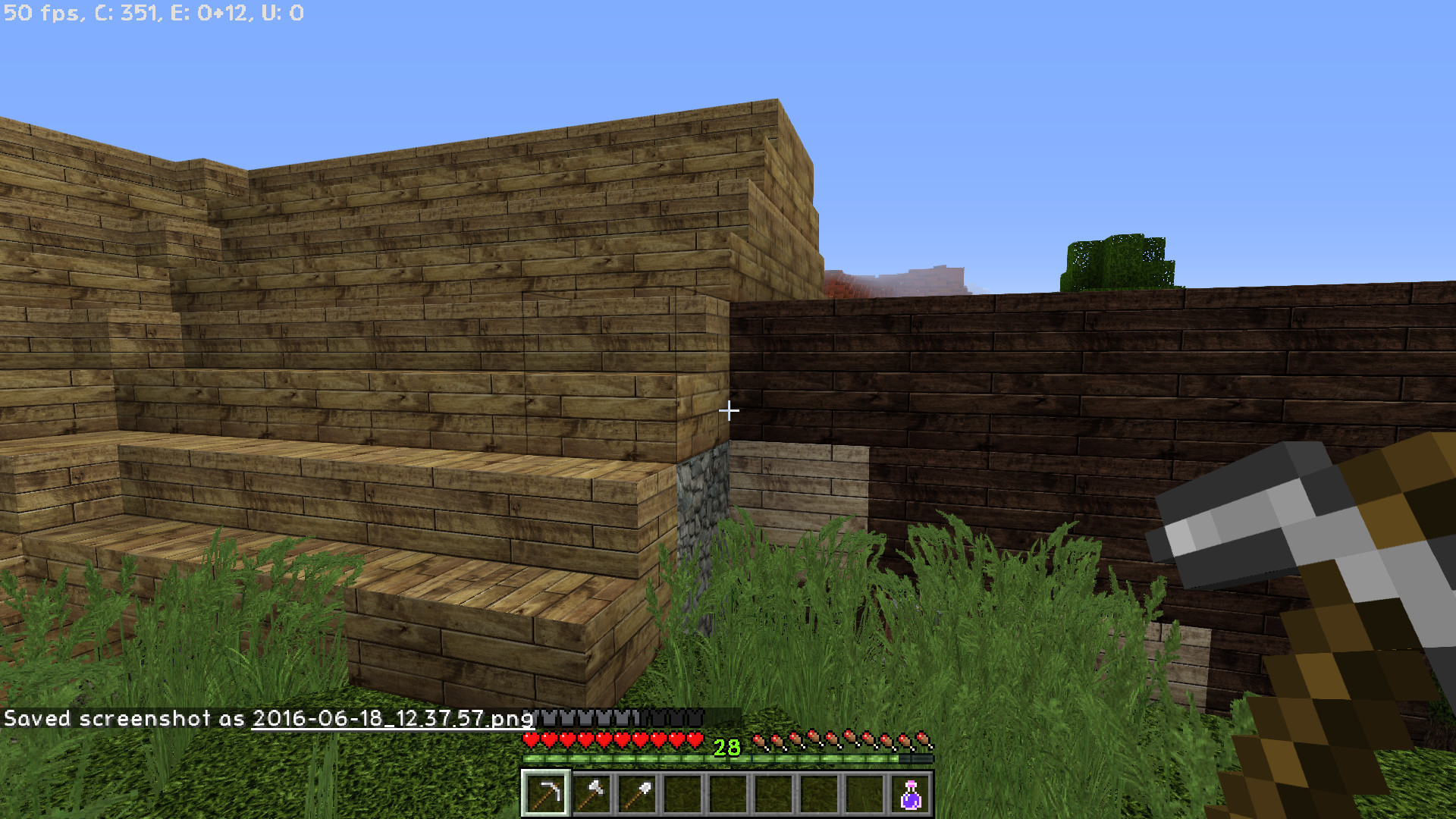 Now, once I discovered using shaders for Minecraft, there is no going back for me. I love the lighting, the shadows and the skies that we have with them. However, I did have to change the one I was using to the Continuum Shader. It's a heavy duty shader though, so be warned, unless you have a rig that can handle it you'll see your FPS drop to less than 10! 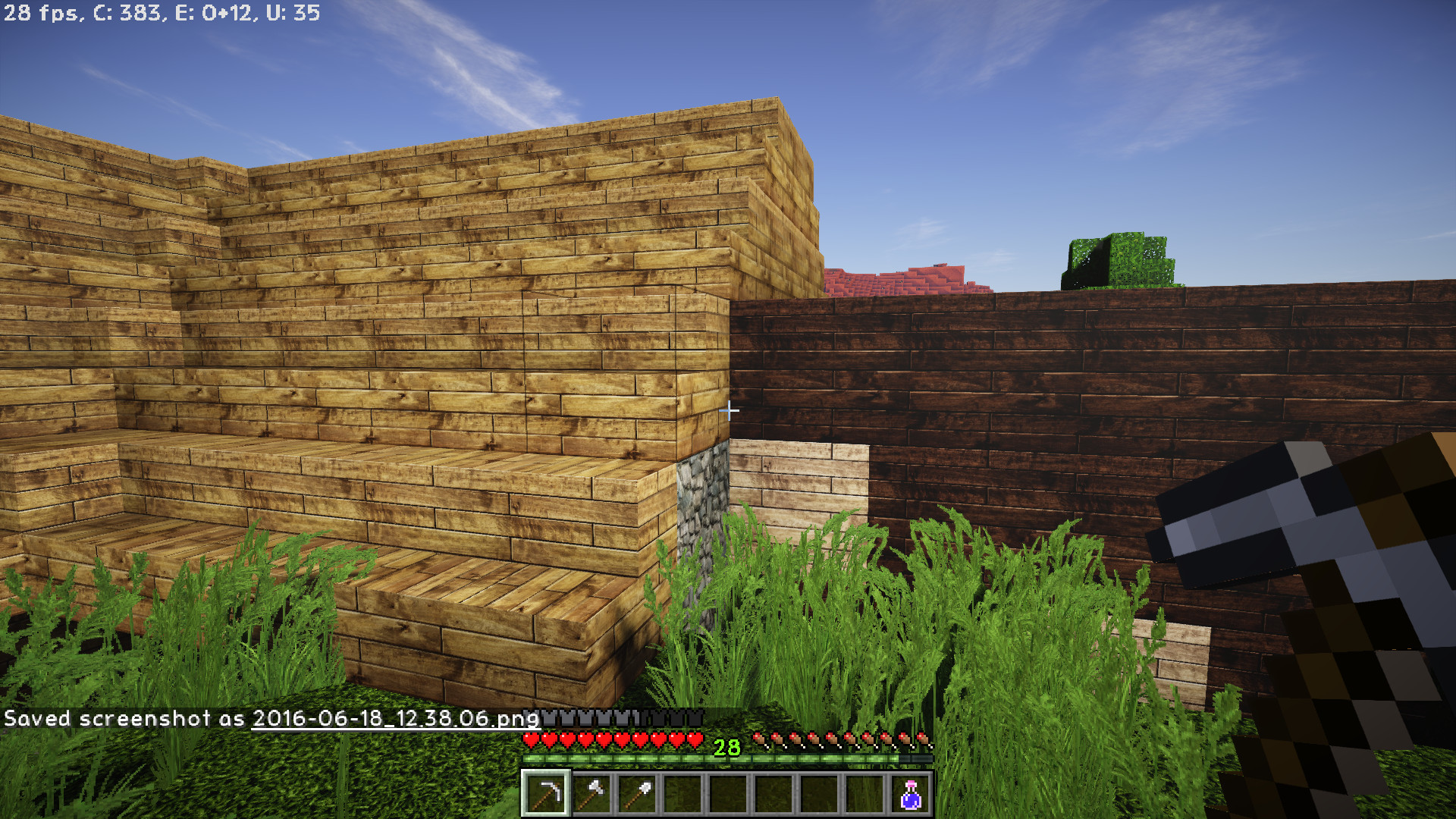 Now let us apply the bump mapping. It's more than that actually. There is the bump mapping, but what I'm doing here is applying extra textures that provide POM (Parallax Occlusion Mapping), and PBR (Physically Based Rendering).
Bump mapping gives us the bumps and wrinkles a texture might have (glass would be smooth, but tree bark would not). POM creates a 3D definition to that textured surface, gives it depth, and PBR gives you much more accurate reflections on surfaces that do that (like water).

Here are the results: 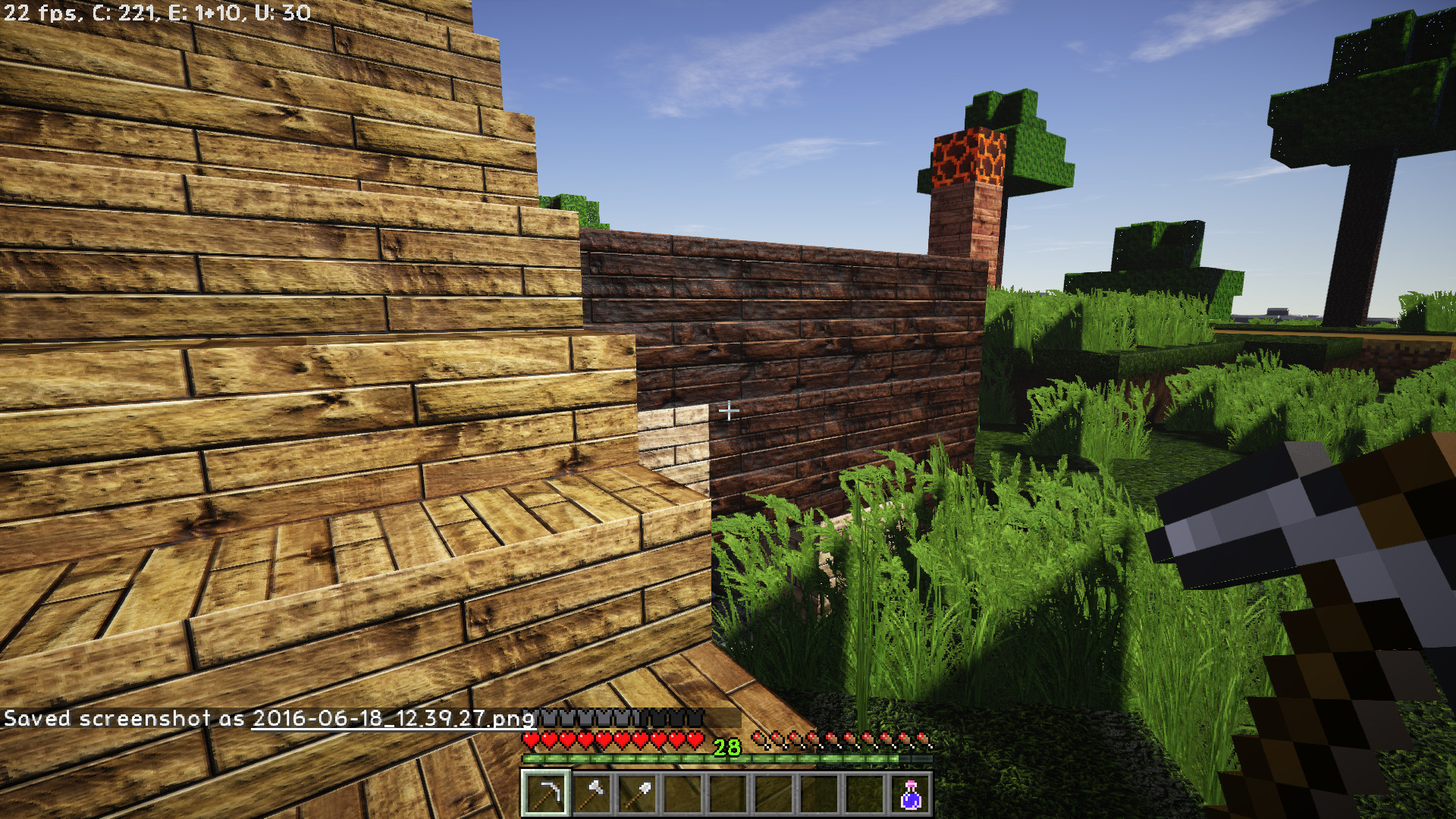 Look at that wood! 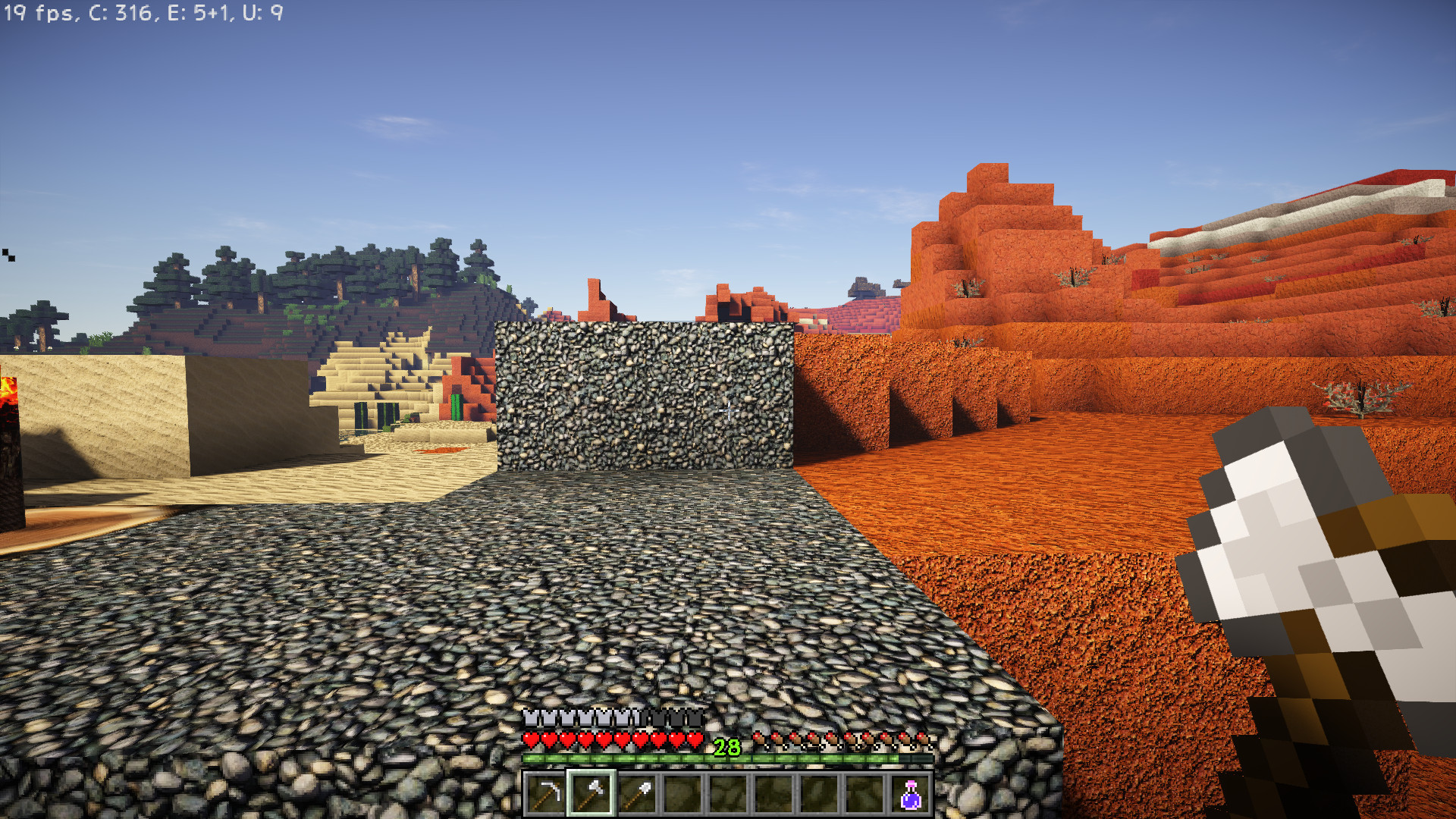 Anyone want some reflective gold blocks? 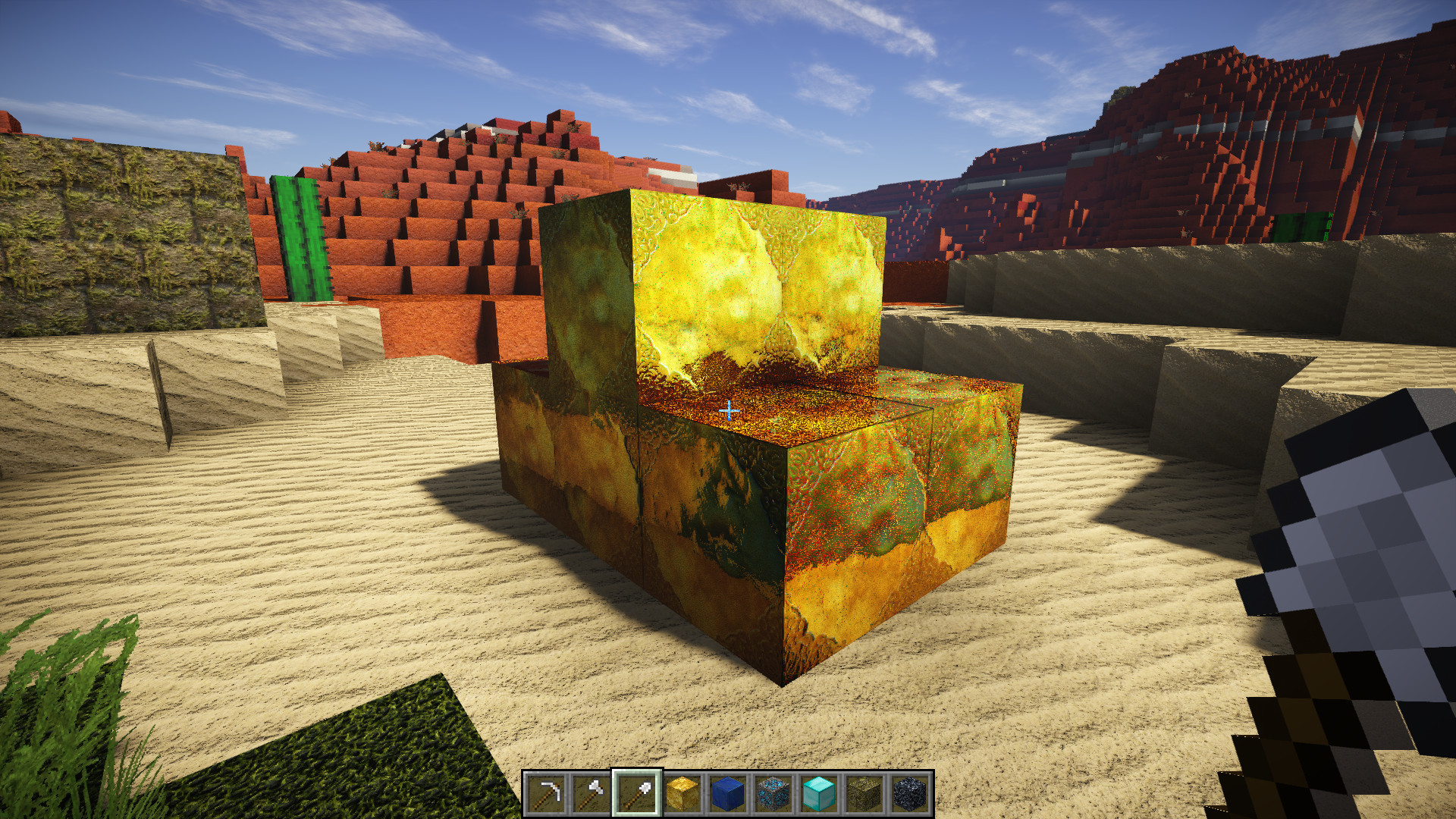 How about some mossy bricks? 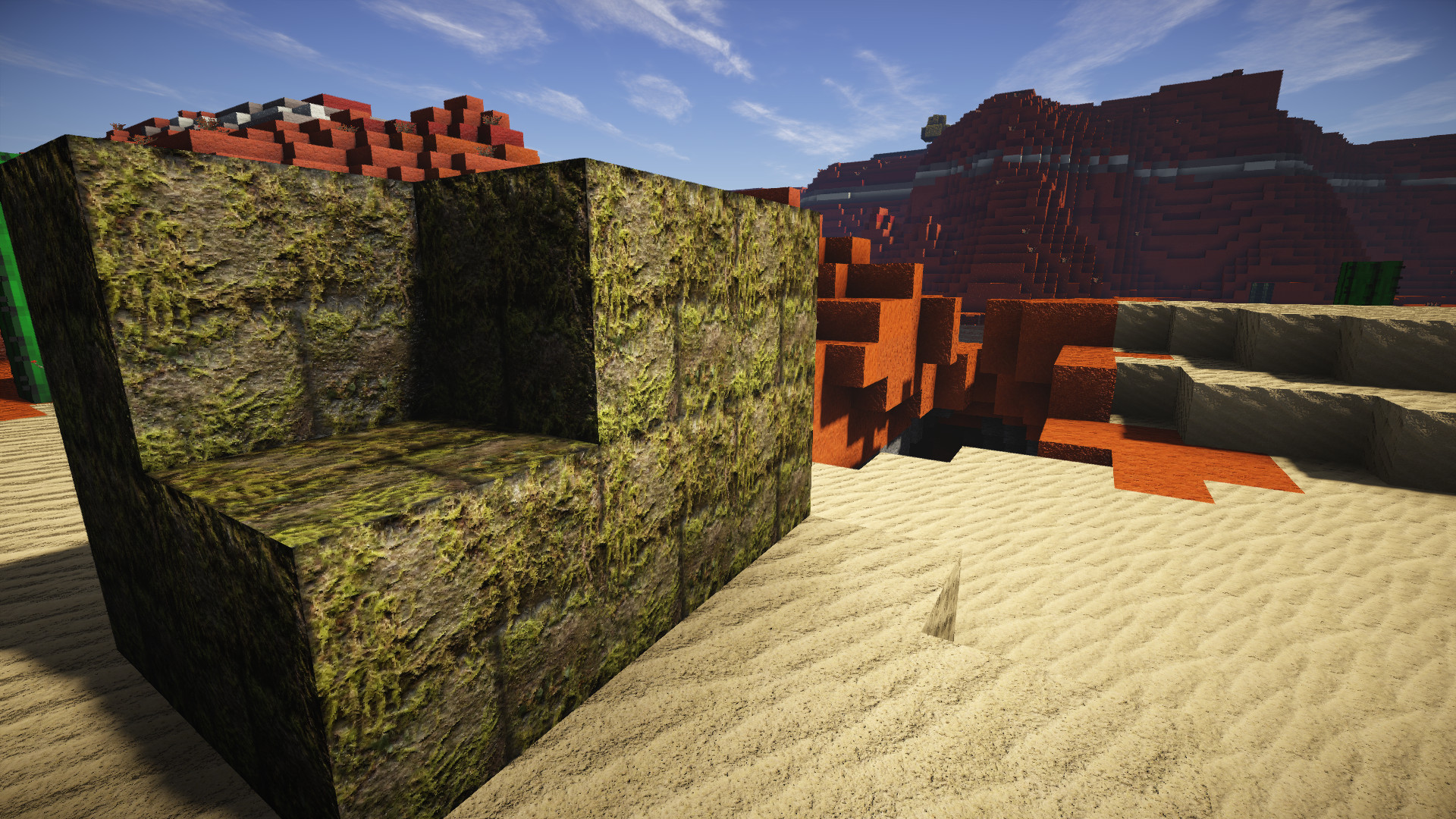 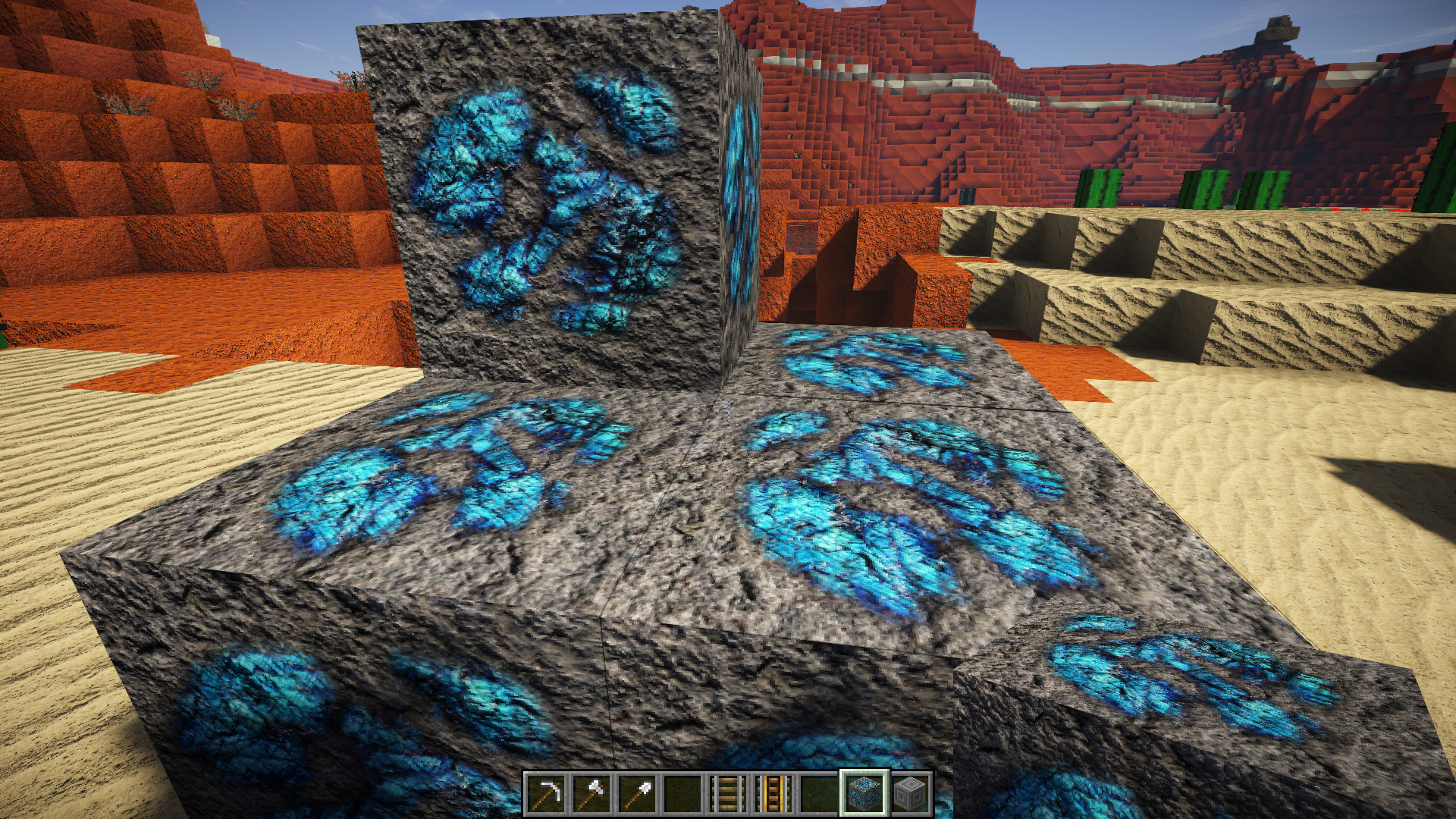 Here's some dirt, and I'm holding a coal block here: 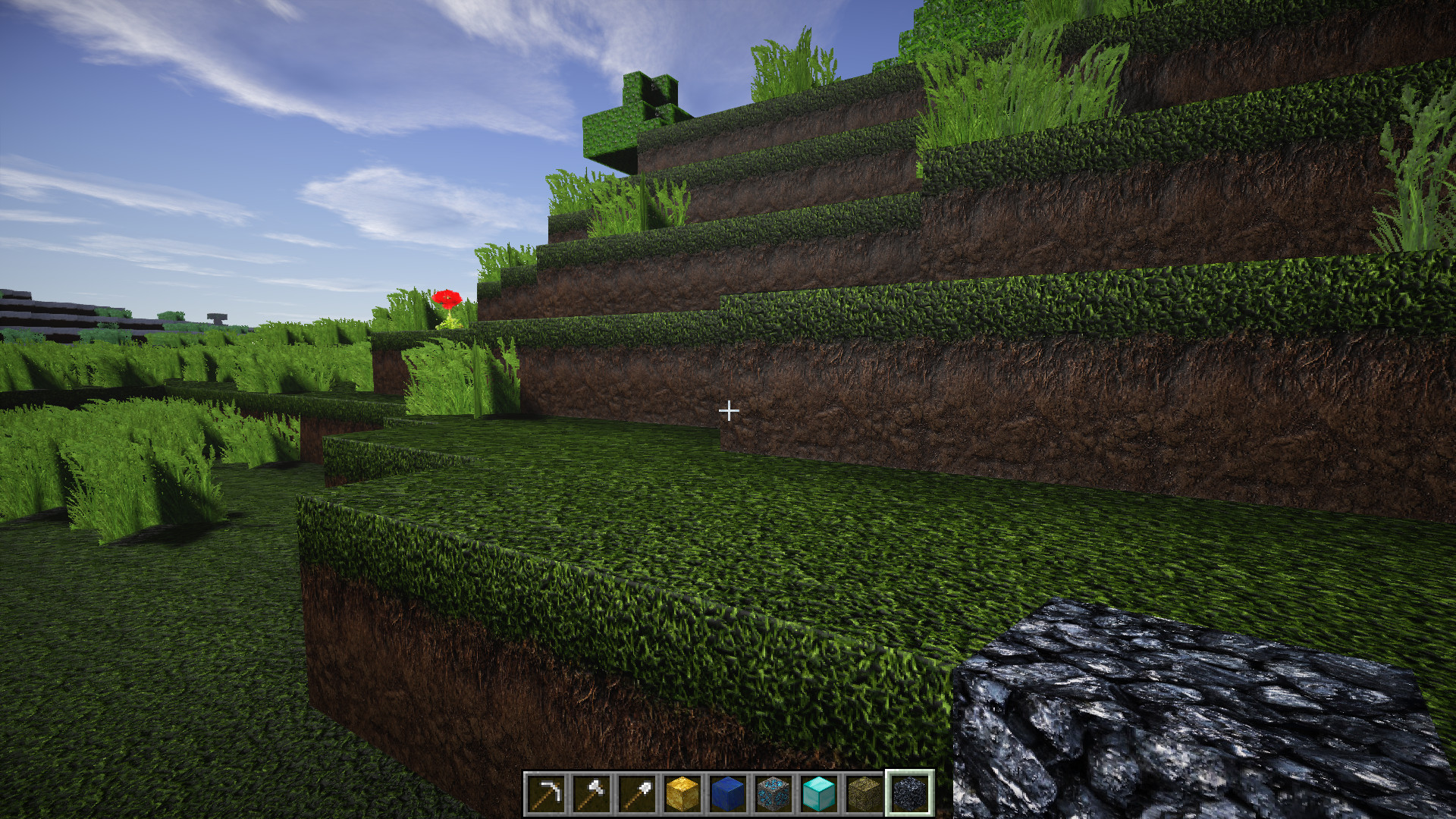 Here is a Jungle Tree bark: 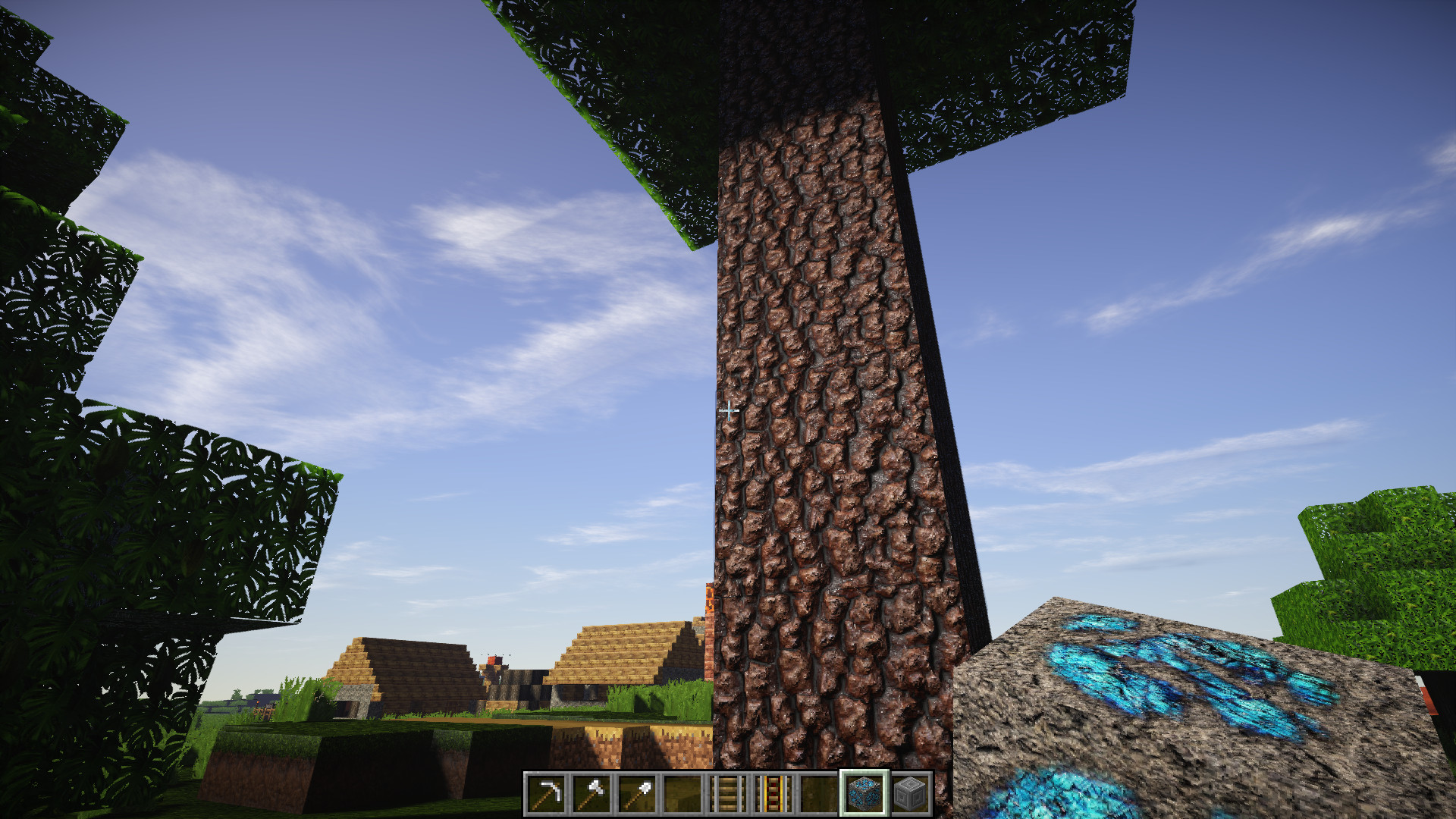 So overall, adding the bump mapping, POM and PBR with the shader makes the game look.....well very different, heh: 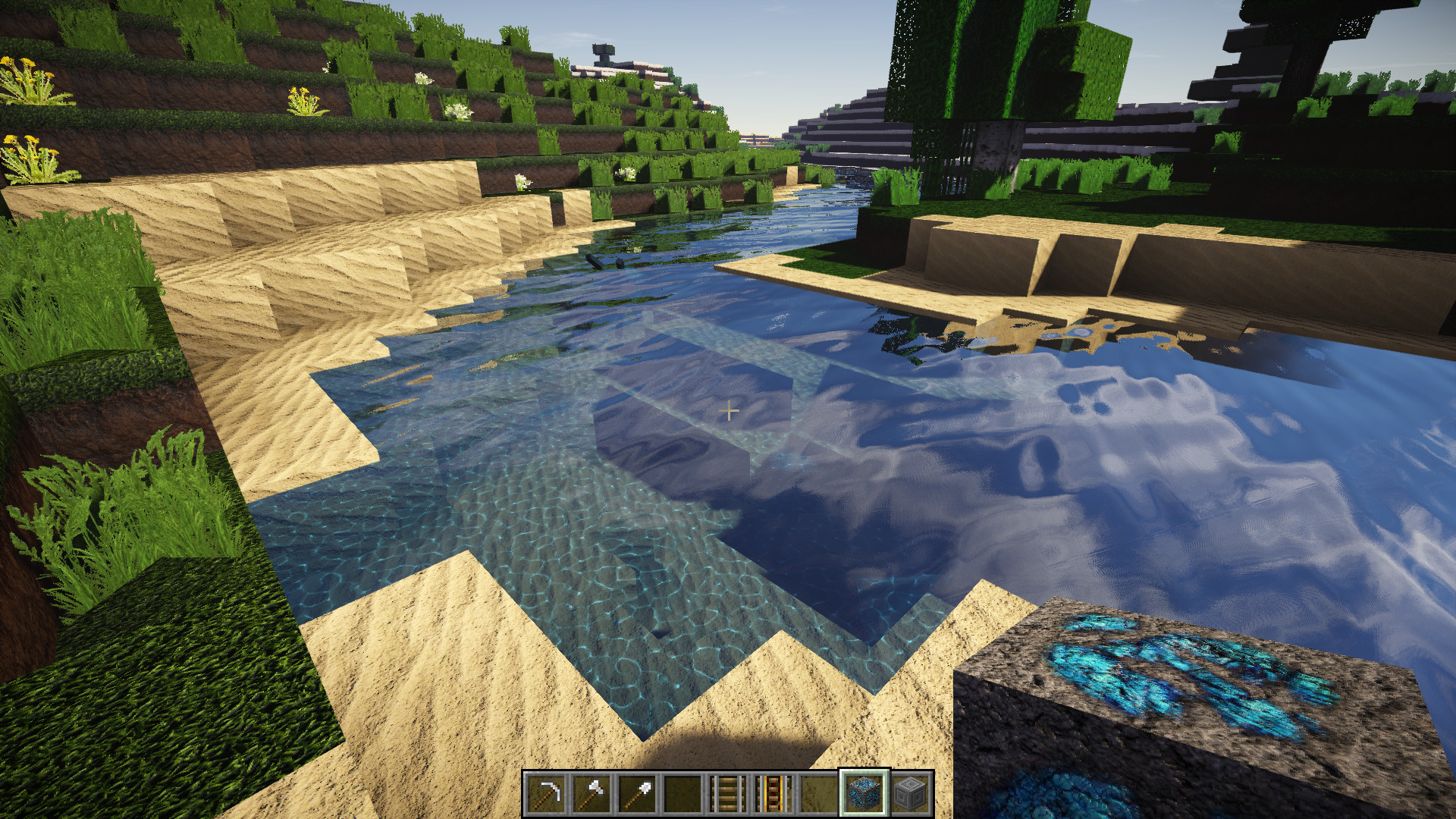 One thing that I like about the Continuum shader is the light shafts you get: 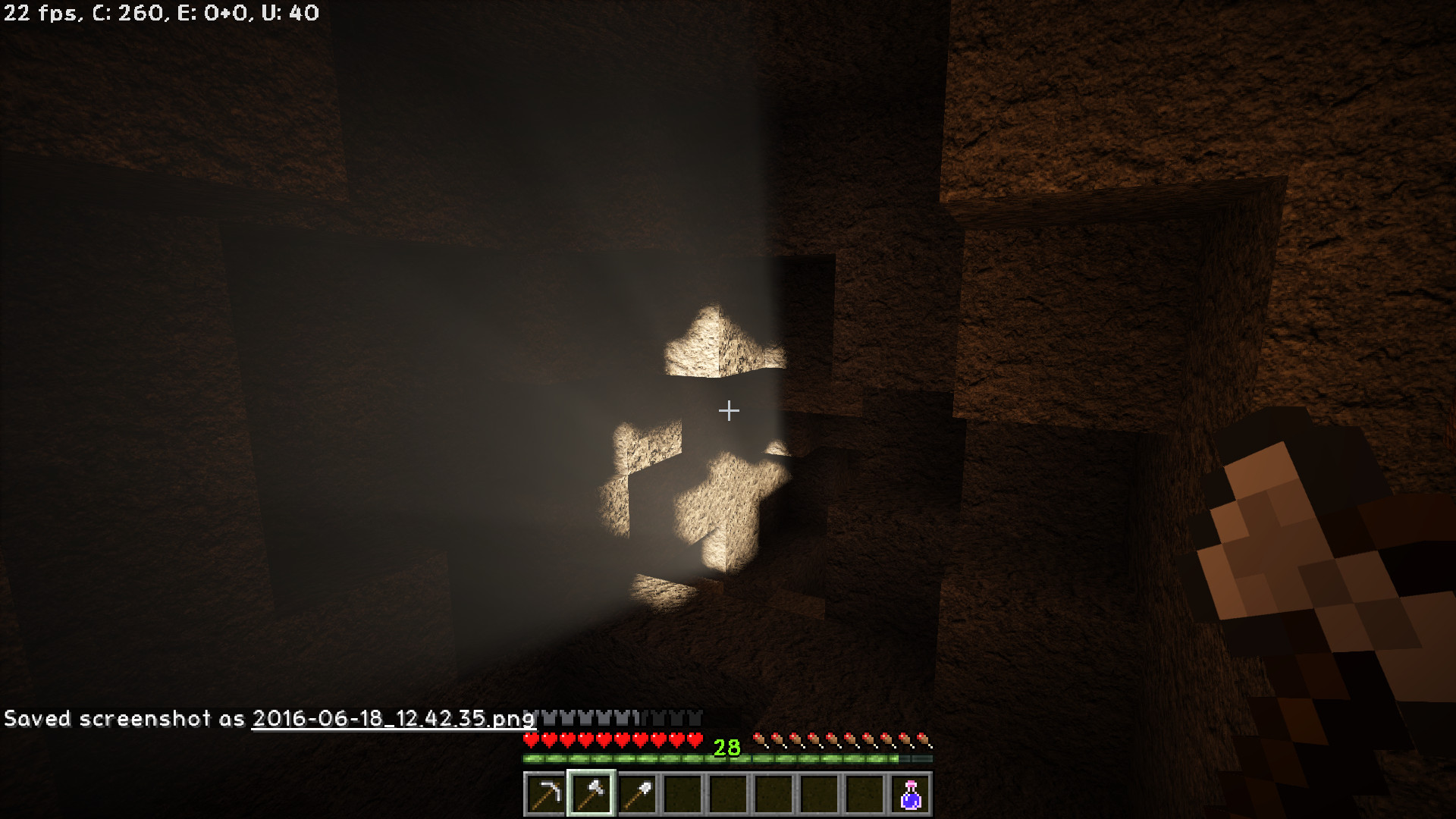 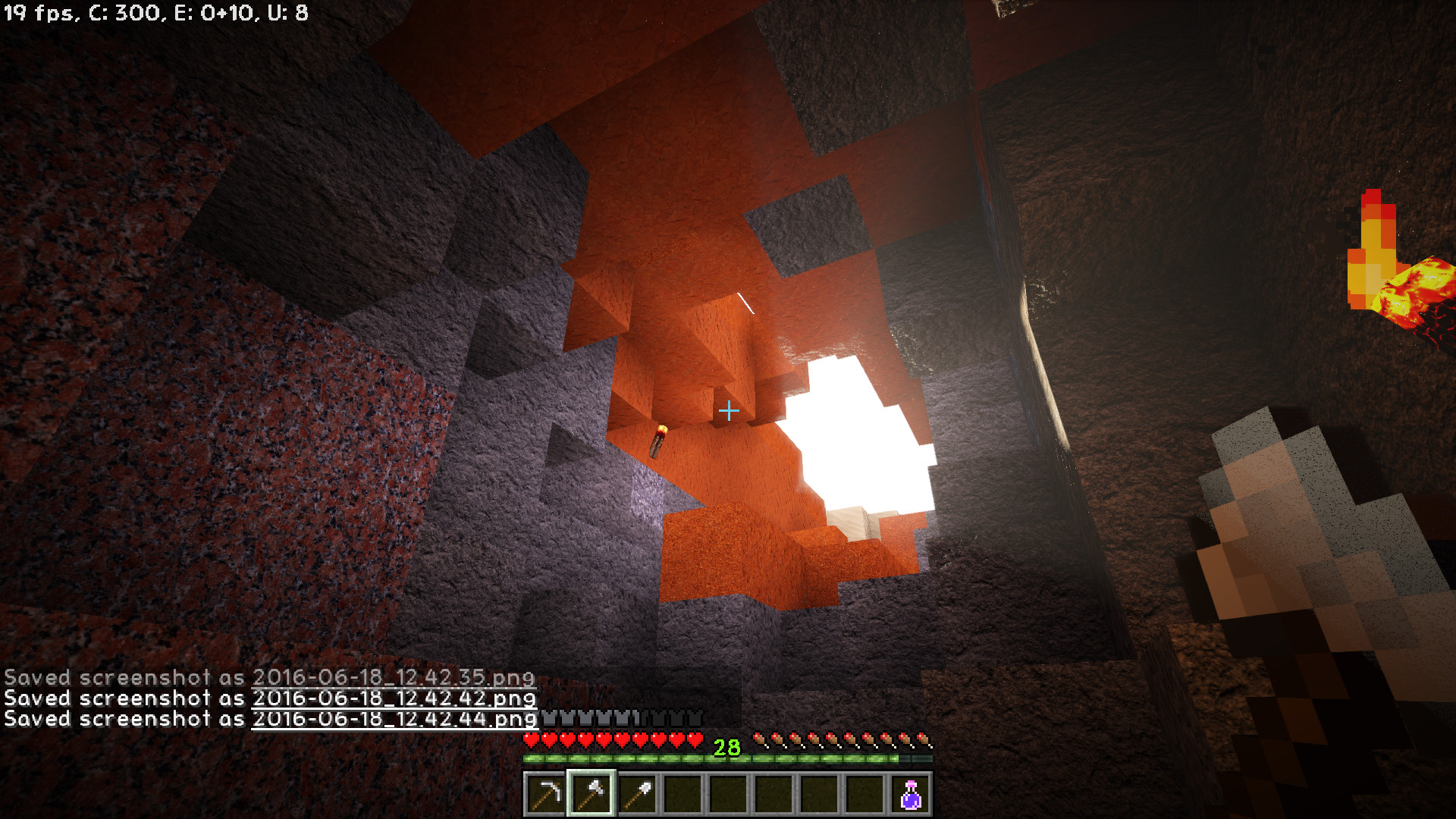 So here is where I found this out:

Pretty much all the info you need on how to do this (if you feel like messing around with it) is there in the above link.

Here is a link for the Continuum Shader. Again....it's really for high end rigs. You can set it lower, but even then it might give you issues. There are other shaders you can try that are listed in the main link for how to do this.

Hope you all found this interesting. I love modding games and seeing what it does.

I've never played this. But am very familiar as its got tons of "let's play" videos out there. Looks awesome.


Speaking of Let's Plays, by chance are you going to upload this to "you know where"?

Been thinking about it.

I'm having some issues recording Minecraft. OBS puts in skips or stutters into the video when there was nothing like that while recording.

It only does it with Minecraft so I'm researching into possible solutions.

One would be to use FRAPS, but the .avi files it creates are HUGE. OBS allows me to have the video output as .mp4 which is much saner video file sizes.

But, I may not have a choice.

If you haven't already done so, why not have a peek at Stonehearth?

Those mods are really good but they'll turn my Jurassic rig into a new radiator.

I'm afraid I'm not tech savvy enough to offer advice. But if you load it I'll watch. Seems I have some catching up to do.

BTW: off topic, but that water looked cold and those feet are VERY White😁.

Ha! That's a cute looking game! I'd not looked at it until you mentioned it. Thanks!

Mods certainly can be addictive for any game.

I an remember the inventory expansion mod for Minecraft, the Too Much Stuff mod I think it was called, I always had to have that one installed.