posted on May, 19 2016 @ 10:18 PM
link
This week we've heard many stories of chairs thrown and violence at the the Nevada Dem convention. Did this really happen or is it just more dirty politics from Hilley and the Dem party? We have dozens of stories on the net that chairs were thrown, are there any facts to support this? Could this be another planned smear by the queen of dirty politics.

Snopes ran an investigation and it would seem that one reporter decided to fib on twitter and the journalists all jumped on his band wagon and reported the false story. This is exactly how misinformation and or lies are swift boated in the news.

WHAT'S TRUE: Video captured during the Nevada Democrats' convention depicts a man briefly picking up a chair before placing it back down without throwing it.

WHAT'S FALSE: Despite extensive YouTube, Periscope, and photographic documentation captured by supporters of both Hillary Clinton and Bernie Sanders, no available images document anyone's throwing chairs at the Nevada convention.

Much of the initial reporting came from local journalist Jon Ralston, who live-tweeted events as they occurred at the convention on 14 May 2016. While Ralston didn't report at the time that chairs were being thrown at the convention, he later tweeted that:

Hey, Berniebot chair-throwing truthers: It happened. People saw it, inc. one journo who was there and reported it. letstalknevada.com... …

It is possible that chairs were thrown because I saw a security officer shielding one person on the deck near the front tables.

It is the videos provided in that OP from Xuenchen that Sunday morning.

I will not say it's not possible, but from my reading on the subject I would say it is doubtful a chair was thrown:

The Nevada Democratic Convention last weekend was highly contentious, as many Bernie Sanders’ supporters and delegates felt that they were denied their voice. The key complaints included 64 uncredentialed delegates, a questionable voice vote, and a motion at the end of the night that was ignored by the party chair. But instead of these issues highlighting the news, attention turned to accounts of “violent acts” by Sanders supporters. However, delegates who were at the convention said there was no violence at all.


But as for an officer standing over or shielding a person, I wonder if it might have something to do with this:

Another delegate shared on Reddit that many people claimed a Clinton supporter was assaulted and fell to the floor after Barbara Boxer’s speech. He wrote that he was there, five feet away, and the woman had actually fainted from heat and stress. She was not assaulted.

Thanks for bringing the information. I just heard another news station claim chairs were thrown, but the footage they showed was at night, outside.

These events are covered by multiple cameras… the main stream media is apparently with Hillary, making stuff up as it goes along?

posted on May, 20 2016 @ 03:14 PM
link
I think some folks were watching tv wrestling and got confused. They thought they were watching a political convention. With Ms. Pelosi on stage, the confusion is understandable.

The Nevada Dems have obviously been swiftboating this story!

The term swiftboating (also spelled swift-boating or swift boating) is a pejorative American neologism used to describe an unfair or untrue political attack.

They have a video of a man picking up a chair, which he sets back down, but they claim there were chairs thrown without proof.

DWS and the DNC are getting heat over Debs attack on Sen Sanders supporters in Nevada.

Interesting comments below that article you liked.

Some of the comments are amazing!

Here is another interesting story about the Nevada and the upcoming Dem convention in Philly:

There are so many stories of Roberta Lange receiving “death threats” but in none of these stories do they actually post any of them as example. There are examples of people calling her names, telling her to burn in hell, and that there should be a public execution, but where did anyone actually say “I am going to kill you.” There aren’t any.

So why all the focus on Sanders supporters being “violent” and never on the Clinton supporter? There is much more proof that Clinton’s people are planning violence but no one seems to want to address that. 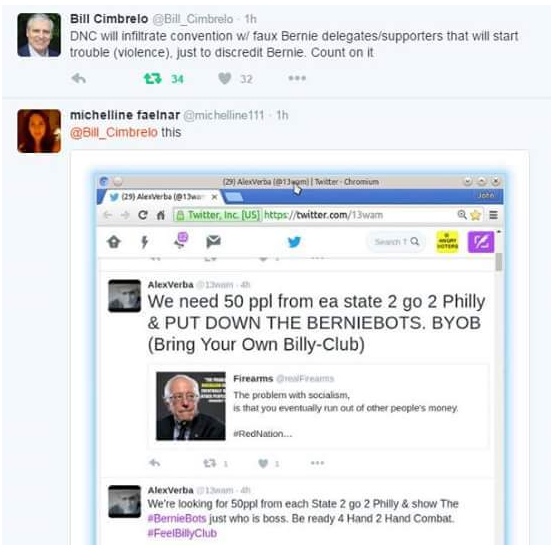 What appears to be happening is that the Clinton camp and the DNC are trying to paint ALL Sanders supporters as having a violent history so they have justification for arresting them at the convention for the most minor of infractions, such as voicing their opinion. Dianne Feinstein is already making comparisons to what happened in 1968, setting the stage for the police to round up anyone the DNC disagrees with

posted on May, 22 2016 @ 12:45 PM
link
Bernie is such a bad guy and yet its Clinton campaign trying to disqualify delegates.

Shows the election is being rigged…

posted on May, 22 2016 @ 10:48 PM
link
a reply to: AlaskanDad
So what will we get from this circus? Will the "Philly Five" take a cue from the the Chicago Eight? How much will the promise of violence at the convention boost the viewership of the convention? How much will the media play up these "threats" to boost their audiences?
Diane might want to re-think this strategy. It didn't work out so very well for the Dems in '68.
But it should be good entertainment---which is what it really comes down to, doesn't it?