A man stumbled across a Roman villa in his back garden which is being hailed as the most significant discovery of its kind for a decade.

A man from Wiltshire was attempting to install underground electricity cables in his barn when he made this amazing discovery.

“I sent a photograph to the council and within 24 hours they were here with archeologists to see what we’d found.” 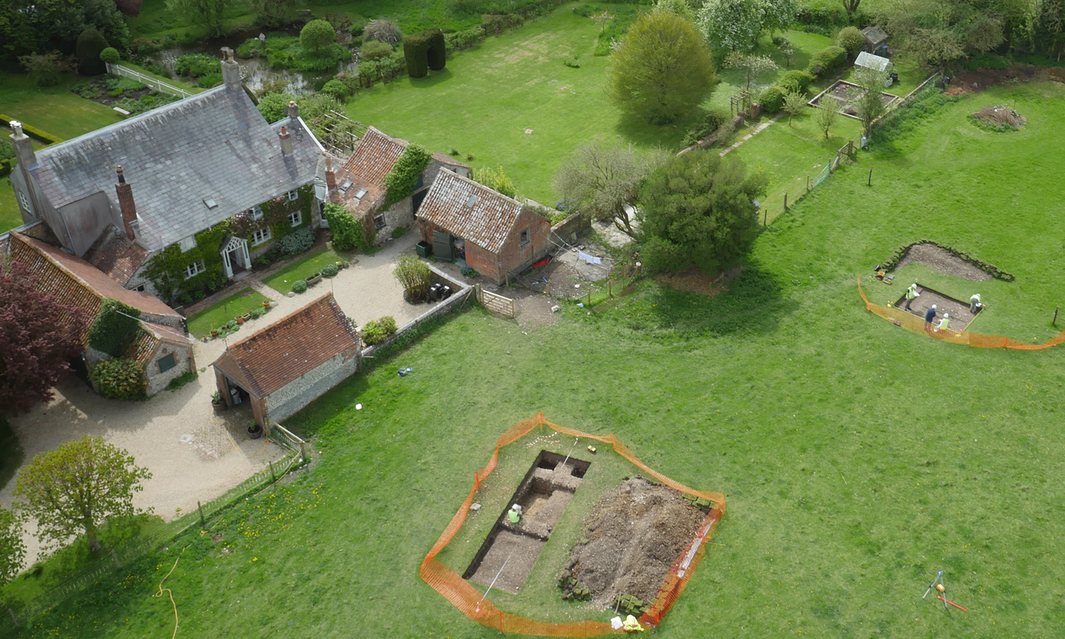 Experts from Historic England and Salisbury Museum carefully began excavating the site, and realized the mosaic formed part of the floor of a grand Roman building.

The find has been proclaimed by Historic England as “unparalleled in recent years”. 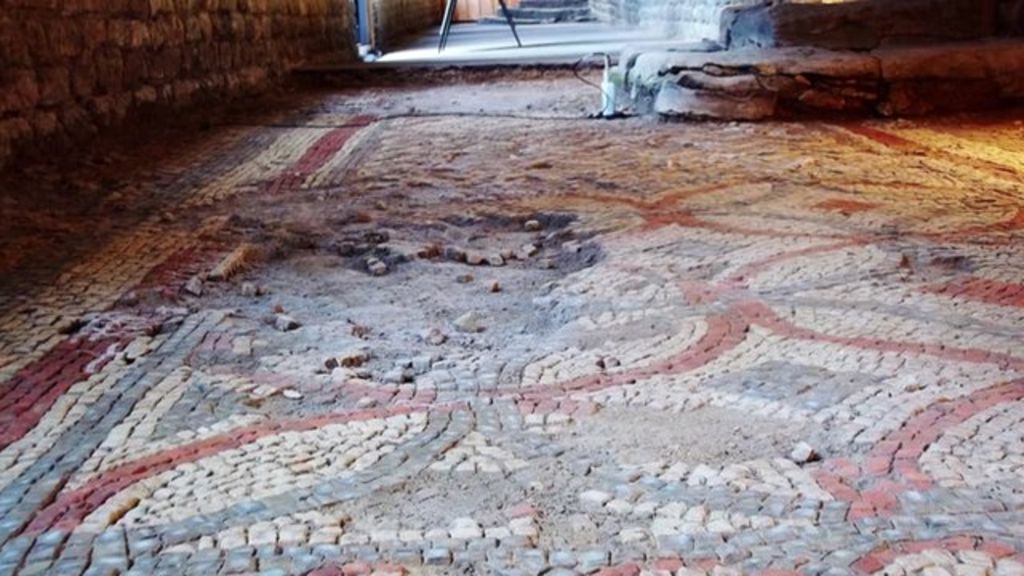 After digging for eight days, the archaeologists uncovered what they described as an “elaborate” and “extraordinarily preserved” villa, one of the largest ever found in the country.

Dating from between AD 175 and 220, the grand home is thought to have been three storeys high, similar to those found at Chedworth in Gloucestershire. 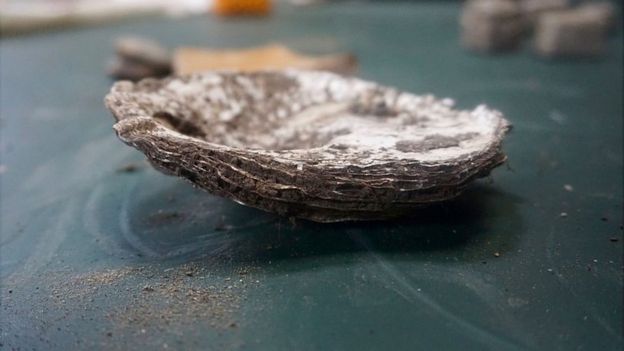 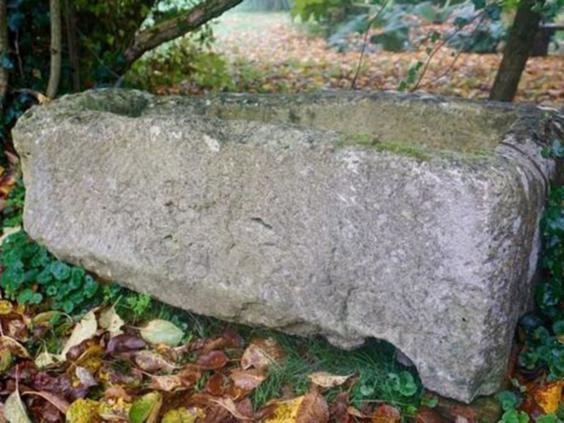 A perfectly preserved Roman well and the stone coffin of a Roman child, which went unnoticed and was being used as a flower bed, were also among the finds.


Archaeologists believe the site has not been touched for over 1,400 years and is of extreme importance. Below is an artist's video recreation of what it may have looked like.
What a great discovery!

I really hope they don't try and force the man out of his property though by declaring the site some kind of historical land mark.

At least not without proper compensation. Great find though.

posted on Apr, 18 2016 @ 09:56 AM
link
I saw this yesterday, I love stories like this!
But, it also makes me wonder what we've lost over the years by people either not understanding the discoveries they've made or just pretending they haven't found something to avoid the inconvenience.

The fact that there's been a child's stone coffin sat there on the property for decades and used as a planter while they knew nothing says a lot about what we're missing.

Thankfully, in this case, the man who owns the property actually understands the value of it, and he's willing to be a part of the story.

I hope he continues to be this involved, I think his family should be rewarded through investment in the property to make it an important site of British heritage in the years to come.

originally posted by: tothetenthpower
I really hope they don't try and force the man out of his property though by declaring the site some kind of historical land mark.

At least not without proper compensation. Great find though.

He seems to be fully involved in the process so far and more than willing to be a part of the story, he seems like a very cultured and intelligent man who understands the value of the find.

I personally hope they work with him to make this site a cultural/historical attraction, and of course reward him and his family over the years for giving people access to the site.

That would be the best scenario I would think. From reading the story it almost seems like the man would be willing to curate or run some kind of historical museum once everything was complete.

Seems like the perfect person to have found such a thing.

Wasn't there a chap who found a roman building(minus roof) a few years back?He was looking for a lost golf ball.😃

Great find! Although, I am a little bit in awe over the man's house and property anyway, from the aerial view. As far the the Roman Ruins, I just wonder how large and what other ruins they might find spread out over the property (and hopefully nothing right underneath his house)!

That there is a large amount of discarded oysters thought to be cultivated is also interesting, and I would like to know what kind of cultivation, something natural or a salt water farm created on or near the property. And that this person was supposed to have been someone of some status, due to other things that were found, I wonder if there is a record somewhere of who it was that lived there.

Maybe I'm missing it since I just woke up, but is there a link to the article? All I see is a video. ETA: I see you added the link, thanks!
edit on 18-4-2016 by Liquesence because: (no reason given)

And when someone asks me how my little stone garden path looks so good and has lasted so long I tell them while pointing at myself "Roman blood, we build to last"
I love the mosaics. Been playing with an idea now for a bit too.

posted on Apr, 18 2016 @ 11:14 AM
link
Thank you for posting this. I love history and this puts us right in the living room of an prominent ancient citizen. So very cool..

See sometimes it pays to hit it into the rough.

Oh right. Earrings are pesky and fall out all the time. Rich family means nice jewels.
I'd comb the place.

What a wonderful find. Talk about doubly blessed. First the gentleman owns an incredible manor house and farm, and then he finds an even more incredible ancient property under the first incredible property!

Sorry for all the "incredibles" - but INCREDIBLE.

Can you imagine waking up every morning and getting to explore ancient history in your own yard? I want that!

Oh well it's not a manor house either.
edit on 4182016 by Sillyolme because: (no reason given)

originally posted by: veracity
I love the coffin being used as a flower bed, this is amazing!

Haunted by the spirit of a young Roman boy who perished from a fall off his horse. Or some such romantic tail to go with it.

posted on Apr, 18 2016 @ 09:04 PM
link
How does that much dirt cover a building or foundation of a villa ? I'm always dumbfounded when they find a place like this...I can't help but think " who covered it with dirt or how did the dirt get there ?"

originally posted by: Meldionne1
How does that much dirt cover a building or foundation of a villa ? I'm always dumbfounded when they find a place like this...I can't help but think " who covered it with dirt or how did the dirt get there ?"

ever had leaves piles up in winter?
same principles.
when the romans left and vikings took over, the bases of power shifted.
bath, romes power base in england was usurped by jorvik (york) when the vikings settled.
once christianity took hold, these old places were tarred as pagan and evil and abandoned.

the pyramids and sphinx in giza were abandoned and covered in sand not to long ago.

originally posted by: Meldionne1
How does that much dirt cover a building or foundation of a villa ? I'm always dumbfounded when they find a place like this...I can't help but think " who covered it with dirt or how did the dirt get there ?"

That's just almost 2 thousand years of moss, grass, dead leaves, animal waste, weather... you could go to any abandoned place and see the same thing happening pretty much in real time. A wild area of land can produce inches of mulch on the ground in just a couple of years.