Now like me, the first thing you are probably thinking is what kinda bad drugs are these men on?

But then the first case is a guy not on any drugs or alcohol at all. The other cases are non specific about this.

Why are they all running round butt naked doing and screaming the weirdest of things?

Are all these people having schizophrenic episodes?

Is the Uber driver insane, or did the app really talk to him?

I find it very interesting when a bunch of these incidents are brought together for analysis like this.

Theres a huge population to pull from.

originally posted by: Lysergic
I'd say the app didn't talk to him, how crazy he is thats debatable.

Theres a huge population to pull from.


I know, mental illness is the most likely answer.

Mmm, do we call ghostbusters? The 80s team of course, I mean they handle ghosts, demons and poltergeist no?

If you wanna get all deep out there conspiracy youtube video universe...

Would these people just be puppets of the Archons?

posted on Apr, 8 2016 @ 02:36 AM
link
Demons have been roaming this world monitoring lost souls to devour since the Apple of Knowledge event.

They got the green light to possess humans and attack other sinners on Dec 22 2014. The events that you see now are nothing compared to what its going to be like by the end of 2016.

To most these events will seem like a schizophernic episode, but I am open to it being more.

I'm replying just so when the end of 2016 happens with the normal amount of crazy people being crazy, I can come back for an explanation as to why your crystal ball wasn't properly calibrated.

But if you're right, and we all go nuts well.... Good call brah!

posted on Apr, 8 2016 @ 02:49 AM
link
I could be apathetic and just say it's crazy people doing crazy things... but the amount of crazy we've seen over the past few years is just exponential to what we've seen in the past.

Demons, pharmaceuticals, frequency pollution or mind control. Whatever you want to call it, something strange is happening.

Demons, pharmaceuticals, frequency pollution or mind control. Whatever you want to call it, something strange is happening.


That's kinda the point I am alluding to.

What is causing the rise of such things? I am forty something years old now and things like this just never made the news, even ten years ago.

So, what is going on?

posted on Apr, 8 2016 @ 03:24 AM
link
Why is your first conclusion "demon outbreak". Using misleading headlines to bring in views/flags is the exact same thing people get angry at the media for doing.

It means that from the start of the thread you are already reaching to a conclusion that is far fetched rather than taking in all the evidence and coming to the most sensible opinion. It's embarrassing to see on this website, one which is supposed to deny ignorance, that people are so obsessed with flags that they are willing to give up rational thought.

@markosity1973: who says there is a rise? 20 years ago the internet wasn't that popular. Nowadays information can just more easily be shared, which in turn could mean that the same amount of crazy people did also run around naked 100 years ago and attacked people.

Also someone in the comments section of the youtub video says a part of the video is cut from "Butt naked in Budapest". Not good for credibility. Also another seemed to have recognized a fake date of August 2016 on the video, which is in the future.
edit on 8-4-2016 by anotherdaytoday because: (no reason given)

posted on Apr, 8 2016 @ 05:11 AM
link
Someone should mark on the map where these incidents has happen and we could see if this is linked to certain area ( pharma pollution etc ) .. as a non US can´t really pinpoint all these areas.
It would be intresting to see tho.

posted on Apr, 8 2016 @ 05:12 AM
link
If their are demons making people go naked and crazy, I'd say that these demons are the spirits from a whiskey bottle. I've seen this sort of thing on weekends working at a campground.

The most interesting part of this to me is the extent that religion has influenced mental illness and uses it as a way to justify it's own existence. The concept of a devil is so ingrained in our psyche and culture that even people that aren't religious still have an inherent belief and irrational fear of it.

I saw a video on youtube the other day of magicians doing some really cool tricks, the narrator was explaining how they were all possessed. Can't figure it out....must be demons. It's bizarre to see how little we've progressed since the dark ages.

originally posted by: markosity1973
Tell me more about Dec 22 2014 - what happened? What changed?

To most these events will seem like a schizophernic episode, but I am open to it being more.


i had a similar dream where demons were breaking through the invisible barrier between our world and the spiritual world. The barrier is now basically defunct/dead.

One fire elemental covered a gang in fire. One minute everything was fine, then everything went up (with them included) in flames with a 30ft radius hemisphere of fire.


In other words, fire elementals or Shaitan Djinn that are fire based got given the green light to attack the world.

Look at 2015 fire events.
1) The burnt out cars still neatly parked in the China factory yard after the Rod of God struck. 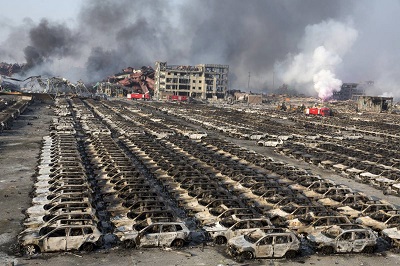 Other huge explosions in many Chinese factories.

2) The ammunitions depo in Japan going boom in 2015.
3) Pro-gay demonstrators in Taiwan, describing an event as 'Hell on Earth' when their 'Rainbow Dust' went wooommfff. 400 of them ended up in hospital with burns.

4) A spiritually protected wooden Cross of Christ Messiah was all that survived on a hill top in California after being surrounded by bush fire.
[url=http://www1.cbn.com/cbnnews/us/2014/January/Smoking-More-Dangerous-Than-We-Thought[/url]

Shows that evil entities cannot damage anything that is protected by the Spirit of Christ.

Here is the future killer. On April 19 2016, a Temple to worship Baal will be constructed in Times Square, New York and Trafalgar Square, London. Baal is usually in reference to Thunder Bolts.

In Tristran's dream, after he managed to break out of a tunnel from hell, he was standing wielding a quarterstaff of pure lightning in his left hand. So do not be surprised when entire electrical grids start to shut down worldwide when air elementals get the green light to attack this world shortly after April 19th 2016.

Reminds me of a strange dream I had a few months ago.

In the dream there was something like a dimension opening on the horizon and this huge demonic type entity was coming through it.

On a pier facing the opening there were people praying, others including myself began to run in the opposite direction when a huge explosion occurred.

So what about all of the other big explosions over the years? Many much larger than that in Tianjin..

I always look at the big picture too, for example, there is a bridge in Connecticut where, 2 times in the past few years, a father murdered his infant child by throwing him/her over. I googled it and found that it happened (different fathers) a cpl times before.

Is there a demon terrorizing the area?

originally posted by: threeeyesopen
In the dream there was something like a dimension opening on the horizon and this huge demonic type entity was coming through it.

On a pier facing the opening there were people praying, others including myself began to run in the opposite direction when a huge explosion occurred.


Tell me, was the pier part of a sea harbour where this giant, 30' high, head above the water, was walking along the harbour slipway heading inland ?

Then he suddenly stopped dead in his tracks when a person said 'In the name of Yahushua, halt right there', like it was totally stunned at how a mortal human managed to speak those words directly at him ?