If You're Blocking Ads While On ATS, You Get A Big Ugly Message


originally posted by: Nyiah
as far as I know, you only get revenue when someone clicks on an ad.

The vast, overwhelming majority of our ads are impression-based. Meaning, if you see them, we get paid.


A few questions if I may?

So every page that loads, with advertisement(s) on it, generates revenue for ATS, correct?

So, hypothetically, if a person were to refresh / fast-click through ATS pages, it would increase revenue for ATS?

I'm curious, how much does ATS earn from an ad(s) per page? (I certainly don't expect an answer to this question, but I don't think it would hurt to ask).


originally posted by: AshOnMyTomatoes
That aint how ads work nowadays. They pay out per load, not per click.

I got to thinking, what's stopping someone from creating an anti anti-adblock? Turns, out, not much. A quick google tells me there's already things to circumvent SO's approach available. I really don't see what's going to be accomplished when there's existing circumventions out there.


Exactly. The problem isn't with the content providers, and it isn't with AdBlockers. It's with advertisers. Users are speaking with their browser addons that they are tired of intrusive, obnoxious, and potentially harmful ads. I understand the staff here vets their ads, and that this advertiser/adblocker war largely puts content providers in the middle of a crossfire. But I also really hate ads.

Good to hear. It would be a tragic loss to lose ATS.

How about a freemium model?

Such sites sell premium features to maybe 5%
Of the members, who wind up paying for all
The freeloaders.

Fyi my little website has grossed over 2 million dollars since 2001...and I've never sold ADS on it.

posted on Mar, 1 2016 @ 12:40 AM
link
I don't care about ads as there aren't enough to really be bothersome. I just want to block all the idiotic .gifs that people use as avatars. Can't stand trying to read with some thing jumping around on the screen. Is there any way around this or do I just keep on using the space bar as my ignore function?

originally posted by: Cygnis
So, hypothetically, if a person were to refresh / fast-click through ATS pages, it would increase revenue for ATS?

All our ad providers use a think called "AdSafeProtected." It watches for fraudulent activity, and displays a blue-sky-white-clouds image in the ad space if it thinks something is fishy.

No malware or virus problems ever with the mac. I have loads of security, more than I probably need because me and a couple of other family members managed to piss off someone that is astute at hacking. Frankly I could care less about whether I see ads.

I am a little confused (which would surprise no one that knows me ) but i see no adds . My laptop is as it was bought from the shop and i certainly have not put an add blocker on . That being said i did see the cat earlier which was the topic of another thread .

posted on Mar, 1 2016 @ 12:50 AM
link
Ok that information tells me the first layer of ad servers for the white listing may be all I can pull, I will see about getting SkepticOverlord my clean box direct to the modem compile that I plan on doing this weekend, that way he would have it.

Thinking about it I may want to crawl as much of the forum with out logging in so I can get the most ad exposure for that list.

I guess it is Archive diving time for me. No Scp or Tv tropes for me this weekend.

If looks like your posting history has attained a level where we don't show you ads.

Thanks . Just a question . Is it star based , post based thing .

And it is not unethical for a site like ATS to actively provide a few tracking cookies? I can understand the advertising bit, but tracking - on a conspiracy site?

And certainly not unethical to present large click baiting sections that leads to scam sites?

And before you answer. I know that click baiting parts are for non logged in members, but to be fair, most times I'm on ATS, I'm not logged in because it's faster and therefore easier when I just want a quick look around the new items.

Of course, I have intimate direct knowledge of how the ad technology works, and it's nothing like the FUD the ad-blocking companies feed you.


I run two websites of my own, one with a forum. I simply pay the costs out of pocket. At my income that wouldn't be feasible for a site the size of ATS I suppose but I assume for some people it would be. As someone who both runs sites and posts on several, I have to say that I am vehemently opposed to ad's. When I saw the message today for ad block I contemplated simply leaving the site, but then upon further thought, did something else to disable them while still whitelisting you.

Perhaps this is just me though.
As a website owner I don't believe in putting ad's on my websites. It lowers the quality, makes the experience worse, and frankly I don't agree with getting paid to make sure someone is exposed to a message that's designed to make them spend money... it's all a bit too manipulative for me.

As a software developer, I feel the same way. Free apps with ad support are hands down the most lucrative model to go with (and right now make up the vast majority of apps available), but it strikes me as unethical. There's better ways to support your software than brainwashing customers, even if the profits aren't as high.

As a website poster, I'm in the same boat. I don't want to see ad's. Of course I realize that the websites bills have to be paid somehow. I imagine that without ad's (and ad support really is a losing battle) everything is eventually going to move to subscription based services which probably isn't any better, but it does take the ad companies out of contention. But using terms like mentioning that in the ToS we agree to not use ad block is ridiculous. ToS are about how we conduct ourselves on the forums or other related media, not how we access it.

I'm going to attach a screenshot here, this is why I block ad's. The computer I use to browse ATS is an older netbook, I just loaded this thread in Edge, which I have fewer adblock programs on. The entire first page of the thread is advertisements which the screenshot shows. Once it gets down to the forum, 1/4 of the screen on the right side is taken up by adds. If the thread is 5 pages long (page down's, not forum pages) by area that's 2/5 or 40% of the content that's advertisements. That's simply way too much. 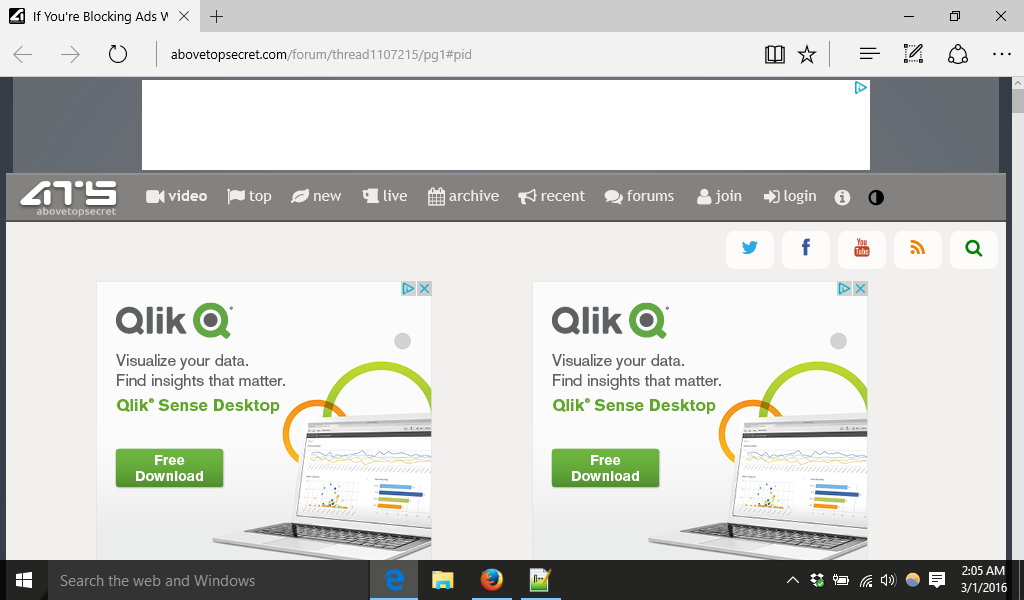 posted on Mar, 1 2016 @ 01:21 AM
link
I white listed ATS in my suite of tools, and it has not caused me any problems as of yet.
I understand the revenue thing very well, and it is what it is. Rather be here than not.

Really, depending upon where you go on the web, you have to protect yourself. ATS is good enough to scrutinize what ads they let in, so you can back yourself up by having protection in your OS and Browser in case anything does get through, your personal "firewall" should be able to handle it. Premium A/V and AntiMalware agents (not gonna mention who) will most likely stop anything that backfires. It's the way it is. Who would have thunk it back when Mozilla was a baby....

originally posted by: TheSpanishArcher
I don't care about ads as there aren't enough to really be bothersome. I just want to block all the idiotic .gifs that people use as avatars. Can't stand trying to read with some thing jumping around on the screen. Is there any way around this or do I just keep on using the space bar as my ignore function?

I have never seen a gif as an avatar. I assume the script blocking I use prevents it.

posted on Mar, 1 2016 @ 01:24 AM
link
I ran adblock for a time on ATS by accident. Been whitelisted now for a few months, though. The ads I've seen on ATS have been mostly fine, however, there was one particularly annoying one that would replace the index page when I loaded it. It no longer seem to be around though, which is nice.

Oh, and immediately after I disabled the adblock, for a time the sidebars (where Deny Ignorance is displayed) linked to the ATS twitter account. WHICH WAS VERY ANNOYNG since I tend to click on the left and right sides a lot.. (Plus, it made every page load more slowly.)
Thankfully, that is also no longer around.

No real complaints any more.

originally posted by: machineintelligence
Stick a fork in it SO this site is done. It was a good run. Cheers in best of luck with your next effort.


Don't let the door hit you on your way out.

I got the message yesterday and disabled my ad blocker, I had never really thought about it before now and simply assumed that my awsome talents more than made up for the lack of revenue gained from ads.

I still do not see any ads unless I go to the home page and I never do that?

If I use my tablet then I see loads and find it a bit tricky to navigate but I never sign in on the tablet and hate the damn thing anyway.

Viewers hate them.
Webmasters need them.

ID is ad free. We are small and the pittence they pay us for the page clutter just isnt worth it imo.

If I try to put myself in skeptics shoes, and I cant fathom what that entails, I think I would have to come up with option three.

What that would be, I dont know.