My Name is Focus

I understand your confusion... After all, you've only seen the positive reports I've made here in this thread. Let me do some explaining that may clear it up a bit. It will give me a chance to get it all out. Forgive the length of this post.

First, let me say that I put forth a persona on these boards (and in life) of a strong person with her # together. I don't often show what could be perceived as weakness, insecurity or failure on my part. So, most of what I post about my personal experiences is filtered through that lens. So, your being "taken aback" doesn't surprise me at all. I'm glad you said something about it. Gives me a chance to show my human-like frailties. LOL!

Anyway, when we "ordered" Shade from an extremely reputable breeder, we filled out a questionnaire that was VERY detailed about what we were looking for. I'm not sure how it happened, but the puppy we got was not what we said we wanted in several important ways. I suspect most of the litter's puppies were spoken for, and we got one that other people simply didn't choose, that was the closest to what we wanted of the remaining pups. But I don't know. It didn't matter. We got the pup we got and we were committed to making the most of the situation.

For the three months that Shade has been with us, he went through all the phases of a normal (high-energy) GSD puppy, including biting, growling, being defiant, and just basically being a pain in the ass. There were times when we wondered if it was going to work because of how very different he was from our other GSD puppies. But I was assured (by my trainer and the GSD board I belong to) that he would outgrow most of these annoying behaviors. And he has. It was only then that I realized that even without the biting and all, I (we) still wasn't going to be able to work him to his fulfillment.

We live in a small town and there's one trainer that I know of. We've been working with her all along. We don't have an AKC, agility, fly-ball, a therapy dog organization, a herding organization or even a good dog park. But since I had done great with Jaia and B'asia, I figured it would be similar with Shade. I was wrong. The breeder offered to give us another dog from a future breeding, but knowing that it would probably be a similar situation, I declined. That's when she suggested donating him for SD training.

Shade was 180 degrees out from Jaia and B'asia temperamentally. They were free in the house by the time they were 3 months old. They never chewed anything, stole anything, ran from us or behaved negatively in any way. I credited myself with these successes (I know better now - they were just laid-back easy dogs, which is why we wanted another one like them.) Shade still doesn't have run of the house at 5 months. He has to be supervised and still thinks everything is his to do with as he pleases. He needs more than I have to offer. I've been studying and researching whenever I have a minute so that I can do better by him, but I'm failing and I just had to admit that and do right by the dog.

One problem I can't abide is that Shade totally disrespects Jaia, chews on him, and Jaia now cowers from Shade and avoids him at all cost. I had to stop Jaia from correcting Shade a while ago, because Jaia was getting too overbearing with the puppy. I've just kept them separated since then, the main reason Shade can't be loose in the house. He targets Jaia at every opportunity. Jaia seems lethargic and depressed. I can't have that.

Let me be clear, I LOVE Shade and have loved training him (to my ability) and it breaks my heart to know that he's not going to be with us for his life. But it's been VERY stressful, tense and emotional. The day I made this decision was the closest I've come to a 'breakdown' that I've ever experienced. I cried uncontrollably and felt like I was losing my mind. But when this Service Dog opportunity came up, I knew it was the best thing for all of us. My husband, me, Jaia and most of all, Shade. He will live a fulfilled life with an important job to do, which is something I just couldn't give him under the current circumstances. If I were 30 years old and lived in a large city with many options, I think I could and would have kept him. But that's not reality.

So, that's how I arrived here. I hope that gives you (and others) a clearer picture of the sitch. Feel free to ask any questions.

You do have your # together, and you are an experienced dog trainer, so don't be stressing and distressing over this anymore. You've hit a homerun with your other dogs, so a miss was eventually inevitable.

I once bought a Dalmatian based on appearance only. After thirteen months of hell, I sold him. He destroyed my house, ate a mattress, broke my nose, and bit me. I was constantly covered in bruises. After work, I sat in my car in the garage dreading to go in the house. I let him go to a family with 20 acres and three teenage boys. He was happy, and so was I.

Thirteen months and I was never even able to house break him, which I'm good at.

I kept telling myself "I can do this. Be patient. Be kind. Be firm". Finally, when my friends started saying "I don't see how you are living like this", I knew I had to do something.

Of course I might be completely off-base in comparing your situation to mine because I didn't cry the day he left, I was relieved.

Plus he was annoying the crap out of Jaia, and no you can't have that!

I'm glad you gave us more information. I know you don't take this decision lightly, but don't consider it a failure? It just wasn't a good fit. Try again. Dogs make you happy. Me too. Just looking at their little furry bodies makes me happy, and I think you love to see your accomplishments with their behaviors, which you are great at.

Jaia needs somebody to look after and mentor too, so don't give up. You need to find him a baby brother -- or sister.

originally posted by: ladyinwaiting
a reply to: Benevolent Heretic

I kept telling myself "I can do this. Be patient. Be kind. Be firm".

That's exactly what I tell myself! Interestingly, our best friends said stuff like, "I thought you didn't want children, and here you have a puppy who takes more care than an infant". And stuff like that. They looked at us as though we'd lost our minds a little... We can't both leave the house at the same time unless we take him with us. I have no doubt he would break out of the crate and destroy the couch if we gave him the opportunity.

I will cry the day he leaves. I've been crying every day since this decision and have gotten very little sleep, but what comforts me is that I don't have second thoughts about the decision. Even though I love him and my heart hurts because I want to keep him, I know he will be happier doing a job and we can get back to our lives, so I will be relieved about that.

Try again. Dogs make you happy. Me too. Just looking at their little furry bodies makes me happy, and I think you love to see your accomplishments with their behaviors, which you are great at.

Thank you. I haven't even let myself think about getting another puppy, but my husband has mentioned it several times and when I think about it logically, I know we probably will, for all the reasons you mentioned. I just have to get my confidence back.

Thanks for your understanding and support... That goes for the other members who have posted, DBCowboy, kaylaluv and crappiecat, too. I really appreciate it.

He'll be fine in his new home. Don't stress.

I know you are tender-hearted, BH, but Pleeze don't cry over this anymore. It's for the best.

Remember joy and sorrow for when one is sleeping on your bed, the other awaits on your bedpost.

I see a new puppy in your future, with no regrets, only great joy!

You probably don't know how much your posts mean to me. Thank you, Lady.

posted on May, 27 2016 @ 04:40 PM
link
We put Shade on a plane this morning and he is now in the hands of his new trainer and his new family. It's been an extremely rough day for me, especially when we got home and the 'void' created by his absence became so apparent. I have no doubts that we have done the right thing, but that doesn't make it any easier to do it.

He's going to have a Facebook page... I may have to join after all. 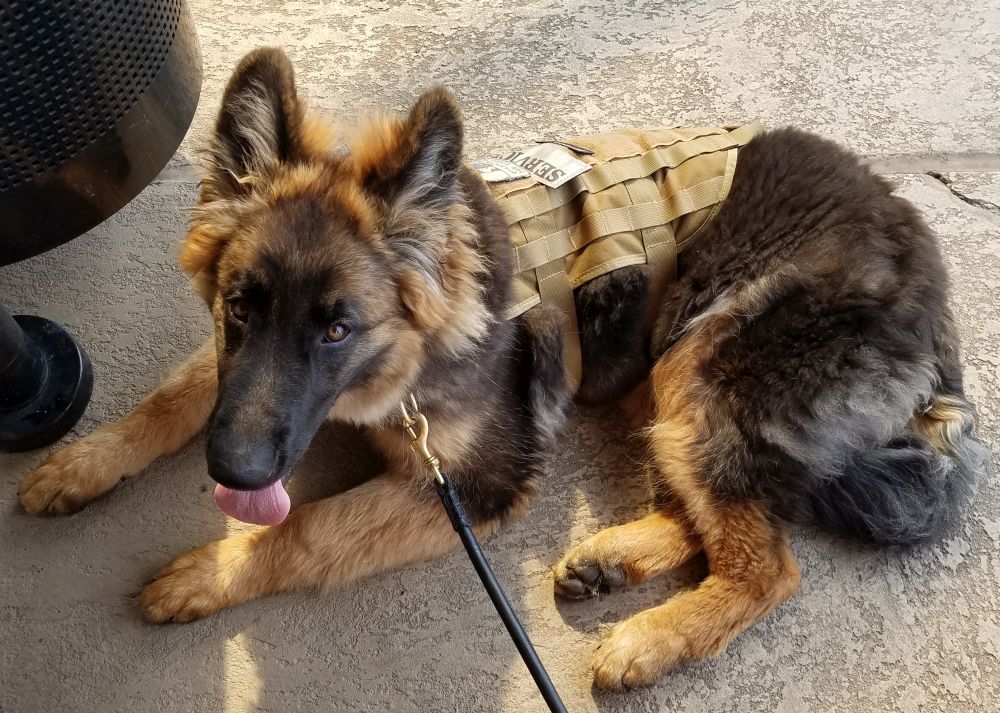