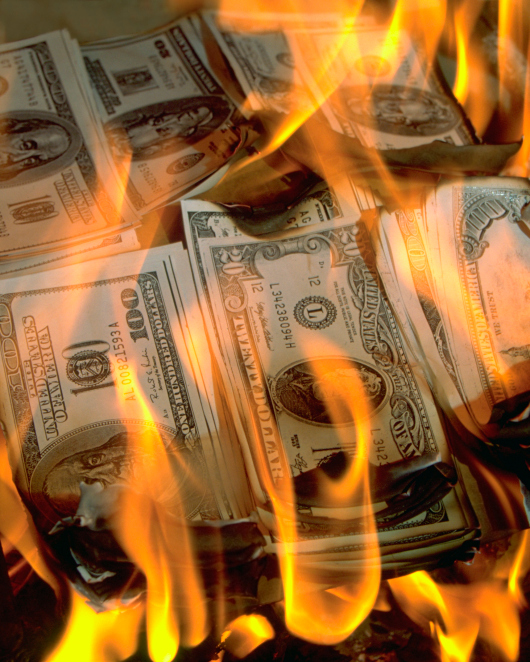 A former top economic advisor is calling on the Treasury to do away with $50 and $100 bills, claiming that larger currency denominations make it easier for criminals and terrorists to do business. But as with all “for security” arguments, there’s an entirely different hidden motive at play.

To make it harder for criminals to move money unnoticed, Summers is calling for “a global agreement to stop issuing notes worth more than say $50 or $100.”

Of course, the change would also make it far more difficult for ordinary citizens who don’t have full faith in banks to keep cash on hand for emergencies.

...the global financial elite are doing everything in their power to make sure that average folks must rely on them for financial survival even after their uselessness is on full display.


A cashless society is a win/win for government and the banks.

No more "tax cheats" trying to keep more of their own money and the banks would get a % of EVERY transaction.

They also want to do away with the $500 Euro which would reduce their cash supply by 30%.

All part of the track and trace agenda where the government knows everything about us and we know nothing about them.

A former top economic advisor is calling on the Treasury to do away with $50 and $100 bills, claiming that larger currency denominations make it easier for criminals and terrorists to do business. B

That's the same 'rationale' they used that make it a crime to deposit anything over $10 grand in a bank account.

The reason they want to do away with that is so the STATE can track you even more than they already are.

Even debit, and credit cards are on their way out.


Beats me, I don't remember what either of those look like anyways. Maybe the 5's,10's and 20's I have will become more valuable. Yeah, more valuable, that's it...

Me thinks larger denominations in currency will net more people having RFID chips inserted into them for micro transactions. Conspiracy no one will be able to or afford to carry larger bills due to their economic or safety situation.

posted on Feb, 17 2016 @ 01:28 PM
link
C.R.E.A.M. Cash Rules Everything Around Me...seriously this is one of my biggest "realistic" fears that I will live to see this enacted. It has already been said and I agree this is just one more chess move in the direction of total surveillance and tracking of all movements of we the sheeple. Bad news if this goes down.
edit on 17-2-2016 by RainbowPhoenix because: (no reason given)

If they want to do away with something get rid of pocket change.

Just saw a commercial about this with Hannibal Buress the comedian whose bit really brought the heat down on Bill Cosby. I thought to myself "oh great here we go".


They also want to do away with the $500 Euro which would reduce their cash supply by 30%.

I'm pretty sure they are talking about "discontinuing" the denomination, as in they won't make any more of them (but whatever is out there will still remain in the money supply).

posted on Feb, 17 2016 @ 01:38 PM
link
The big crime movers use lots of government issued securities that have large denominations.

Some even use stock certificates and corporate bonds.

So they get to a point where a $20 bill is the highest, big deal.

The impact on regular citizens is what they're after.

Because I have to say.

We ain't much of a 'super' power when our largest currency bill is a $20.

It's a bunch of super rich people talking about how they need 'to do something' to fix the world economy and avoiding all the obvious stuff, namely, stuff that would effect them. They have to chase the long tail in order to pretend they are doing something, while avoiding the giant piles of cash up at the head.

Most obviously, until they do something about offshore tax havens, bringing up this whole discussion about getting rid of cash should get them punched in their smug faces. That's the real 'idle cash' problem in (or rather, not in) in the economy.

Of course the tax code should still have ways to avoid paying taxes, if you use the money in a socially responsible way. That just keeps the government's costs down. It's cheaper to incentivize people/firms using their money well with the tax code than it is to have government agencies set up to use tax money to do things...not that they wouldn't still exist as well, just to say that this is why deductions can still be a smart idea. So basically, eliminate all the old fancy and niche loopholes and build it again from the ground up with a focus on incentivizing all the basic stuff the 21st century economy needs.

Wages from the bottom up should be a focus for tax deductions because the economy is dieing from lack of employee compensation, from real wage stagnation, and particularly from automation. Companies don't want to train workers anymore, so training in particular should be completely tax deductable.
edit on 17-2-2016 by 11andrew34 because: clarification
edit on 17-2-2016 by 11andrew34 because: clarification

I say: Get rid of the Penny!

Excellent post. You couldn't be more right. This is an issue I have thought alot about for some time now. A Cashless society is the check and mate for totalitarian control. No black market, no mattress full of cash....etc... Then if you grow this thought out exponentially and add in globalism with an eventual global/ currency and now entire nations, indeed the entirety of the worlds population are under "their" control.

Meh. How many $50 or $100 bills do you keep in your wallet at any given time? I may have ONE. Those denominations are just too high to carry too many on your person and risk being robbed. As long as the $20, $10, $5, and $1 bill all exist, I'm good. Feel free to continue to complain about one guy's (who isn't even the government or part of it) idea to eliminate the least used bills in circulation though. I guess you get more mileage out of those bills.
edit on 17-2-2016 by Krazysh0t because: (no reason given)

What is the bloody difference between a single hundred dollar bill or a bunch of smaller ones that add up to a hundred ?

Someone gets robbed they still get the same amount.

Only the thief has an easier time spending it.

As a rule of thumb, I try not to carry that much cash on me in any denominations.

So do you really think 'digital' currency can't be counterfeited ?

It can be, and it's even easier to do. As in hacking.

Since the state doesn't control the medium like 'paper'.

EGold is a nice example of it in action, and the problems it has.

When did a $20 bill (and smaller denominations) become a digital currency?

Also, do you think banks have mountains of cash equalling all their deposits? The funds are almost all digital.