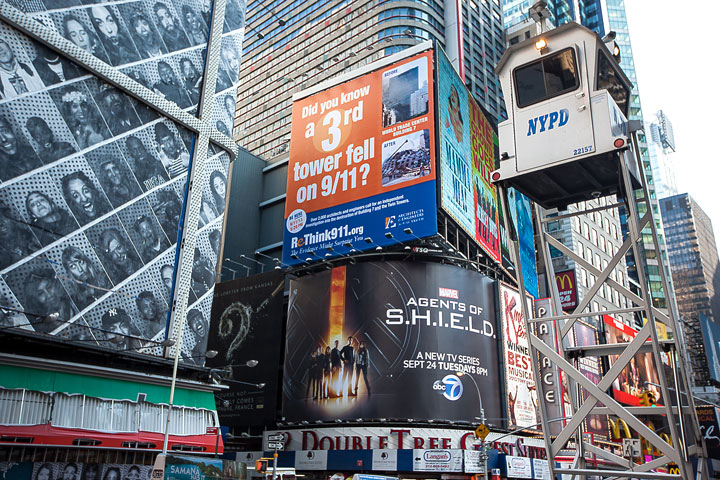 “He sounds like a radical kook,” he continued. “All the rest aside. All of it aside. I know too many Gold Star families who lost sons over there to hear this 9/11 truther crap, which is pretty close to it.

Pretty damn close to it. If George Bush went to war in Iraq and was lying about weapons of mass destruction there could not be a worse thing a president of the United States could do, or human being for that matter. And there were weapons of mass destruction in Iraq. And he was not responsible for 9/11. To have the leading Republican nominee for president of the United States to make these statements, and he’s been praised by Code Pink.


I'm not a Trump guy, but wow, the establishment gatekeepers are really getting desperate.

Trump basically said that Iraq was a mistake and that "the WTC came down during his (Bush's) time".

That makes you a "Truther"?

If Trump was a "Truther", he might actually get my vote.

It would show that he has some sense.

He was using the fact that a terrorist attack on American soil took place when Jeb Bush's brother was president. He said no more than that so what's the actual story here? He stated a fact, although I'm not totally sure what the point was apart from to suggest the WT tragedy was in some part due to the conflicts in Iraq and Afghanistan which the Bush dynasty had fuelled.

Their world is crumbling from inside and out.

Donald just represents a growing majority of people that have had their eyes opened and have been investigating everything since 9/11.

I know on 9/12/01, I dived in and haven't even really resurfaced much yet, it just keeps coming.

This is the beginning of the last part of the ending for the old guard, that guards the secrets.

I know too many Gold Star families who lost sons over there to hear this 9/11 truther crap...

Yeah too many families who lost people have be silenced and given the run around considering the truth too...

Do those families not matter?

Are their feelings "crap"?

posted on Feb, 16 2016 @ 10:54 AM
link
Yeah, Levin is a card-carrying member of the fingers-in-their-ears, "Laa laa laa I can't hear your facts" club for the drowning narrative of the stubborn, ridiculous, and willfully ignorant right. He steals credibility from, and gives a bad name to, other more open-minded conservative hosts like Mark Steyn (there aren't a lot, but they do exist).

And for him to actually say 'THERE WERE WMDs IN IRAQ'?? To reinforce the outright lies in the minds of his gullible audience, lies that might've been close to being broken up by a relentless barrage of truthful facts? Lies that led our country down a path of illegal war and unjust murder for profit?? He's taking part in mass deception, the worst crime against humanity.

posted on Feb, 16 2016 @ 11:15 AM
link
"There were WMD's in iraq." Like he can just arbitrarily conclude that without any evidence. Or maybe he's the kind of person that lack of evidence is evidence itself.

As much as I dislike Trump on a personal level, all he said was "9/11 happened while Bush was president" and "They lied about the Iraq WMD's." I can't really fault him on these statements, since as far as I can tell they are fact. It seems like he's not actually being harangued by republicans for saying something "wrong" but just "saying something you don't say as a republican." Like it's still "too soon," or that somehow Bush is unassailable because he presided over that whole debacle. All I know is that time was a strange time to talk to republicans... in 2003 a large number of the republicans I knew thought we were invading Iraq as retaliation for 9/11.
edit on 16-2-2016 by Slanter because: (no reason given)

Mark Levin: Delta Bravo Extraordinaire. The guy is an America-Hater poorly disguised as a Patriot.

This guy, Limbaugh, Hannity, Beck, Maddow, throw out a name and he or she is a hack.

posted on Feb, 16 2016 @ 11:52 AM
link
I just wish Trump went further and had the gonads to say Bush should have been impeached. Seemed like he was afraid to take that step when the moderators pressed him on it. There's a hell of a lot more he could have said to strengthen his argument. The people who booed Trump for what he said had to be Bush supporters. If the audience was made up of the general public, you would have probably heard loud whistles and clapping.

I think W is setting himself up for being called out for what he is, a war criminal. He's more of liability for his brother than an asset. It definitely shows desperation on Jeb's part.

I'm still not a Trump supporter, but I give him credit for not staying silent on the issue like all the other candidates. Both the GOP and Democratic candidates need to stop towing their political party line and speak the truth. The majority of voters can handle the truth except those who are the party faithful.

We have the memo's from Rumsfield to Bush and company stating that they were going to use the excuse of WMD to go to war. They needed an excuse the memo's said -- and WMD was one of the possible excuses they tossed around.

The entire thing WAS a big lie to the American people, there are documents that prove it.

Because what kind of lunatic would want to know the truth about 9/11?

Wouldn't people rather just gobble up whatever the government chooses to feed us?

“He sounds like a radical kook,” he continued. “All the rest aside. All of it aside. I know too many Gold Star families who lost sons over there to hear this 9/11 truther crap, which is pretty close to it.

Wow, I wonder if Mr. Levin was at that annual soiree for the national press during G.W.'s term...I bet he was, just that his attention span is short, and that his memory is rose tinted...enough to forget that Mr. President, G.W. Bush made jokes about missing..non existent WMD's, off the backs of dead American soldiers in Iraq, and almost everyone there laughed. Mr. Levin, you are both a hypocrite, and a carrot puller.

posted on Feb, 16 2016 @ 06:02 PM
link
So Rush Limbaugh is a Republican attack dog, why is he endorsing Trump when others like Levin are not? Remember that Rush does what he's told to do as does Levin. That indicates a split in the party. A big split.

That was literally a slap to every military personnel who served in Iraq. If I had a son who lost his life in Iraq, and than my president makes a joke of the very reason why we sent troops there, I would have been outraged to say the least.

posted on Feb, 16 2016 @ 09:31 PM
link
Anyone who thinks Mark Levin is a GOP hack does not know anything about Levin. Listen to his show for 30 minutes and you'll learn he has just as much disdain for the establishment GOP as Democrats. Maybe even more.

Rush Limbaugh is not an attack dog for the GOP, he is an attack dog for conservatism. He has not endorsed Trump. He is pointing out that Trump is showing other GOP candidates how to fight against the liberal media controlling the narrative. Limbaugh has stated that Cruz is the most conservative candidate, but has not endorsed anyone. Limbaugh also says that he likes Rubio, and that Carson is an incredibly impressive and selfless person.

I heard Rush on the radio today, previously all I had heard was that Trump was the greatest. Since the last debate though all he's done is attack Trump and call Cruz the second coming of Reagan.

Trump really struck a nerve in the last debate. Previously he had all of these people on his side on radio but not on TV (even when the same host is in both mediums), but now it's all anti Trump.

He ruffling feathers at every level now