As per sciencemag website...there is very strong probability for Planet X....and in their report and video, they actually call it Planet X!

By Eric HandJan. 20, 2016
The solar system appears to have a new ninth planet. Today, two scientists announced evidence that a body nearly the size of Neptune—but as yet unseen—orbits the sun every 15,000 years. During the solar system’s infancy 4.5 billion years ago, they say, the giant planet was knocked out of the planet-forming region near the sun. Slowed down by gas, the planet settled into a distant elliptical orbit, where it still lurks today."

"Batygin and Brown inferred its presence from the peculiar clustering of six previously known objects that orbit beyond Neptune. They say there’s only a 0.007% chance, or about one in 15,000, that the clustering could be a coincidence. Instead, they say, a planet with the mass of 10 Earths has shepherded the six objects into their strange elliptical orbits, tilted out of the plane of the solar system."

So they were aware of 6 bodies beyond Neptune, and now with their 'clustering' together, the evidence for Planet X is very high.

How cool is that? We could truly get some big news on this subject in the near future.


Do look at the video and read the article...I believe the World Governments have de idea that it's time for the Truth to come out of the closet. What do you guys think?

posted on Jan, 20 2016 @ 11:27 AM
link
I really hope you're not saying this is proof of Nibiru or a threat to our planet. Another planet in our solar system is exciting....trying to revive the Nibiru craze is just ....well, you know.


. Its closest approach to the sun is seven times farther than Neptune, or 200 astronomical units (AUs).

If they find an actual planet beyond Neptune, it would be Planet IX, as due to Pluto being demoted we would go back to having 9 planets.


Orbital calculations suggest that Planet Nine, if it exists, is about ten times the mass of Earth and swings an elliptical path around the Sun once every 10,000–20,000 years. It would never get closer than about 200 times the Earth–Sun distance, or 200 astronomical units (au). That range would put it far beyond Pluto, in the realm of icy bodies known as the Kuiper belt. 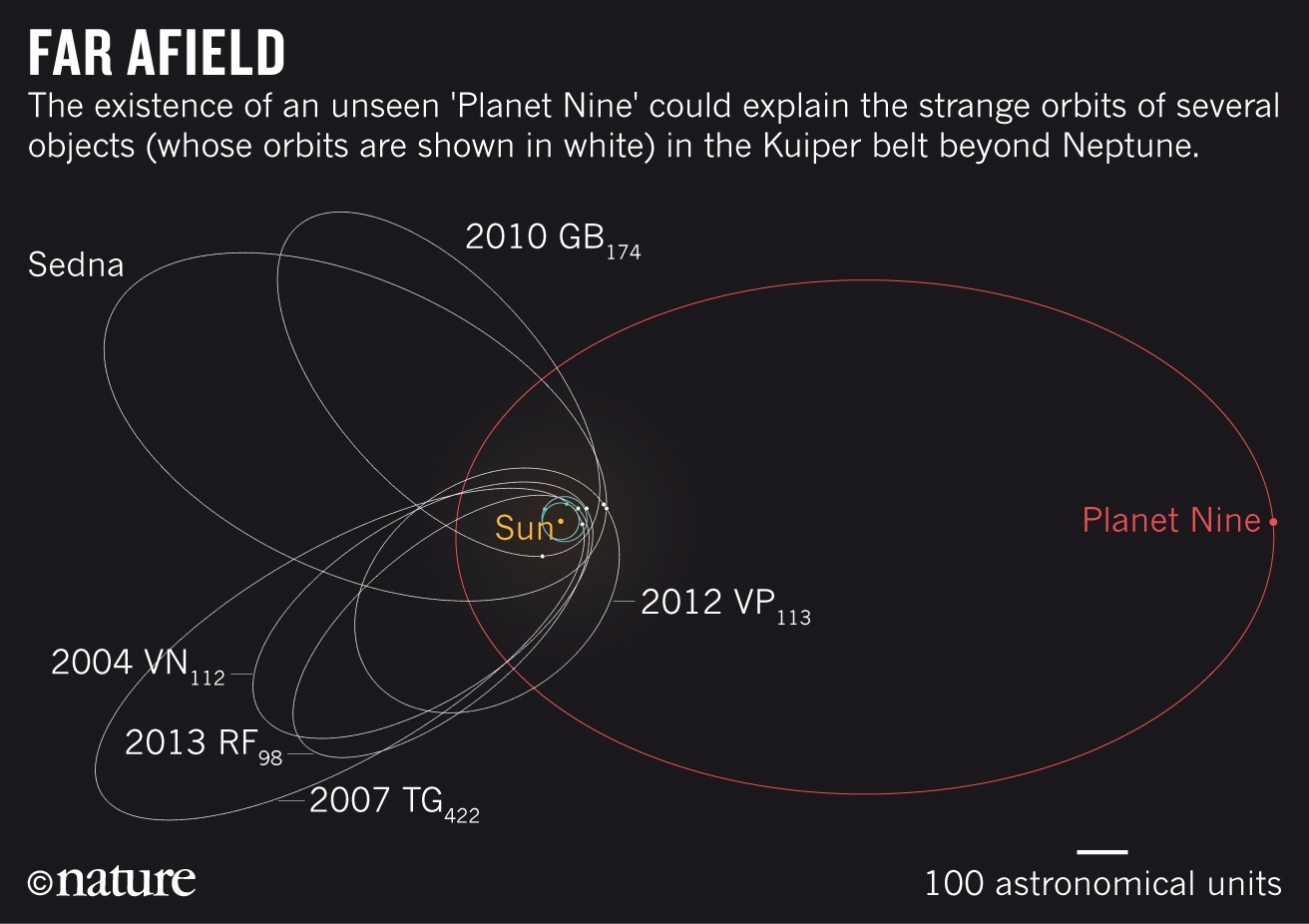 originally posted by: 3NL1GHT3N3D1
This is another planet on the outskirts of our solar system, not Nibiru or Planet X.


Well, the term "Planet X" may have been hijacked by the Nibiru crowd, but the general term "Planet X" has been used for years to simply mean "a yet-to-be-discovered-but-still-hypothesized" planet. The "X" part of it simply meant "unknown".

For example, back in the first part of the 20th century, there was a search for what they called at the time "Planet X" (a hypothetical planet beyond Neptune) that culminated in the discovery of Pluto. At the time Pluto was discovered, they were calling it "Planet X".

So "Planet X" did not always have the same connotation as it does with some people today. Any hypothetical planet should be "Planet X".

originally posted by: Thecakeisalie
a reply to: UnknownEntity

True, but it wouldn't be shocking or surprising to me if a planet-sized body exists somewhere out there in our solar system beyond Pluto. There's a lot of real estate out there for a planet to be lurking for 4.5 billion years, unnoticed.

posted on Jan, 20 2016 @ 12:14 PM
link
I suppose astronomers have ways of determining the orbits of these distant objects, but it does make me wonder just how many fairly large "rogue planets" there are sailing around in interstellar space all by themselves, that occasionally get caught up in a star's gravity and it alters their course for a little while.

posted on Jan, 20 2016 @ 12:19 PM
link
I guess this then is Planet IX since Pluto got the boot.
I read a book many years ago discussing this super orbit planet. I wonder if there are even more out there we have yet to detect..might be hundreds, who knows, but I digress.


What gave you the impression that anyone was hiding anything?