posted on Dec, 20 2015 @ 11:00 PM
link
While I have normally stayed away from the mudslinging side of the elections this year, I do at least like to keep up with what's going on. I ran across this great little article from AddictingInfo earlier that kind of blew my mind, and it seems in line with what a few have been saying on ATS about Hillary's chances of winning despite her major character flaws.


Here’s something everyone needs to know: professional gamblers are far more accurate than polls are. This has been proven time and time again. The Huffington Post calls professional bookies “History’s Most Accurate Election Forecasters.” And, there’s a reason for this. Where presidential polls have been wrong in the past, even so-called reliable exit polls, gamblers have gotten it right with 91% accuracy

The article goes on to state that, based on the numbers given by a few online gambling sites, Hillary is basically going to walk away with this election. What's more, they say that it's most likely that Rubio gets the nod from the GOP.

While Donald Trump likes to thump his chest on a daily basis on how much he’s killing everyone on whatever latest poll just came out, he should know that professional bookies are betting against him. That’s right — and not only that, but they predict the winner of the Republican nomination to be Marco Rubio. Trump doesn’t even come in second; Ted Cruz does

Now, I don't know much about gambling, let lone online, but I do know that bookies are pretty good at what they do considering their cashflow depends on it.

I know that Hillary doesn't have much support on ATS, but considering the nature of the site, we do all share somewhat of an anti-establishment bias here that we can't really deny.

So, with a 91% accuracy record, the bookies have predicted Hillary as the general election winner with Rubio getting the GOP nomination. Trump and Sanders aren't even considered a threat based on their predictions. I don't know if they're going to be right or not, but I'd like to hear what you guys think of this.

posted on Dec, 20 2015 @ 11:06 PM
link
Don't count your chickens before they hatch! It wouldn't surprise me to see Hillary Clinton clinch the Democrat nomination, but I think someone like Cruz will give her a run for her money when it comes to the end of 2016's general election. Rubio could get the Republican nomination, but I bet Cruz will get it, because he's popular with grassroot conservatives and the big players who can help him win.

I'm curious as to their line of thought and reasoning behind these numbers.

What odds are they giving?

and it seems in line with what a few have been saying on ATS about Hillary's chances of winning despite her major character flaws.

She's a stone cold liar, thief, and treacherous. Those aren't flaws in politics, they are strengths. 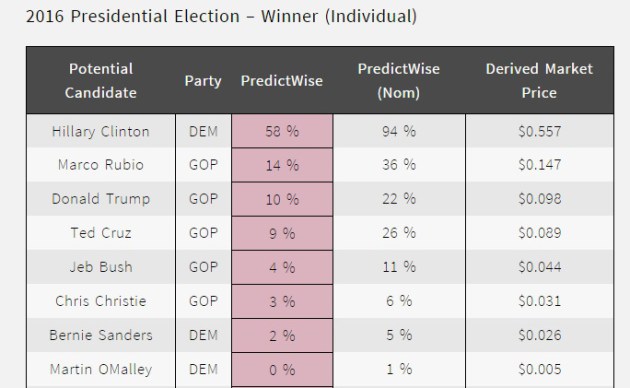 posted on Dec, 21 2015 @ 12:23 AM
link
That's generally all I've been hearing is that Hilary will win. This just kind of makes me wonder if others know something that we don't. After the issue that Bernie had with the DNS and the CEO being a backer for Hilary. I'm wondering if they have something or rather know something.

I highly doubt she will be president! She's nothing but a hundred miles of hell!

I think the bookies have their finger on the political pulse. The sheer dysfunction of the GOP will make Hillary's election victory a breeze. Away from the bookies I have been thinking Rubio will get his party and primary voters nod to take on Clinton. Mind you Cruz could carry the day as many of the GOP voting have delusions that hard right candidate will draw out a missing vote block.

If people can't see the crap and realize their votes don't count, we're all F&^#ED!

Exactly. Hillary has the best odds of winning right now.

I bet 20 on Obama last round. I would've rather taken the loss, but I knew that it was going to happen.

None of them got it right.

Well it's no surprise why the bookies are backing Hilldog more so than anybody else. You look at the electoral college first of all, Democrats get a good 210 electoral college points already..... and then they just need to gain afew toss up states and they reach the magical 270... Democrats don't need Ohio and/or Florida to win... but Republicans do.

Then there's demographics. Trump is doing a fine job turning hispanics away from his party. And no, the Cuban segment of the hispanic vote will not be enough. We all know blacks will go democrats... Bill Clinton got 84% of the black vote after all. Barack Obama even more.

What's left? Independents? Undecideds? I think after all the above, Hillary doesn't even need the majority of undecideds or independents... not that they'd go for Trump as a majority anyway.

None of the other GOP candidates will stack well... save for Rand Paul... he's the only one I think would have a viable chance against Hillary. Fat chance of him getting the nomination though.

My first reaction to that is that 91% accuracy is a huge margin of error. Basically what they're saying is that there's a 91% chance that Hillary gets 51%+ of the vote. The problem is that the prediction is incorrect 9% of the time, which may sound small but a 9% chance of something happening is a very common occurrence.

If you scroll to the bottom of the article you'll see that they predict Hillary has in total a 58% chance to win the presidency. Even that seems high to me, but it's not that high... it's almost a coinflip.
edit on 21-12-2015 by Aazadan because: (no reason given)

Been saying it for a while Clinton will get in because the votes are rigged and she is as corrupt as it gets making her a prime candidate to do the Elites bidding.
One of her aides was present at the Bilderberg meeting this year so for me the writing is on the wall.She has the approval of the NWO who will walk her into office.

This woman has cost the lives of thousands of people in the middle East like Trump said,is knee deep in treachery in Benghazi has scandal after scandal swept under the carpet and openly laughed at having Gaddafi killed and also has a tyrannical sense of humour as has been recently displayed by her aides calling the comedy club and threatening to have it closed down if the comedians kept on making fun of her.

The gamblers are right as bad as she is she is the chosen one.