page: 1
32
<<   2  3  4 >>
log in
join
share:
flyingfish
+23 more
posted on Dec, 9 2015 @ 11:40 AM
link
First off.. let's get one thing straight, I'm not posting this to demonize one particular religion. I don't care what flavor of religion you delude yourself with, all religions want to infect their nonsense on the rest of us, IMO religion is only contributing to the division of humanity.

The reason I'm posting this information is to get feedback on the accuracy of the statistics.
There was one thread done here, but it seems the whole thread was back and forth tag on who's the bigot and not much on the validity of the stats.

Has anyone seen any new statics and has this been debunked?

Looking forward to hearing your thoughts on this.

The following is adapted from Dr. Peter Hammond's book: Slavery, Terrorism and Islam: The Historical Roots and Contemporary Threat:

Islam is not a religion nor is it a cult. It is a complete system.
Islam has religious, legal, political, economic and military components. The religious component is a beard for all the other components.

Islamization occurs when there are sufficient Muslims in a country to agitate for their so-called 'religious rights.'

When politically correct and culturally diverse societies agree to 'the reasonable' Muslim demands for their 'religious rights,' they also get the other components under the table. Here's how it works (percentages source CIA: The World Fact Book (2007)).

As long as the Muslim population remains around 1% of any given country they will be regarded as a peace-loving minority and not as a threat to anyone. In fact, they may be featured in articles and films, stereotyped for their colorful uniqueness:

At 2% and 3% they begin to proselytize from other ethnic minorities and disaffected groups with major recruiting from the jails and among street gangs:
Denmark -- Muslim 2%
Germany -- Muslim 3.7%
United Kingdom -- Muslim 2.7%
Spain -- Muslim 4%
Thailand -- Muslim 4.6%

From 5% on they exercise an inordinate influence in proportion to their percentage of the population. They will push for the introduction of halal (clean by Islamic standards) food, thereby securing food preparation jobs for Muslims. They will increase pressure on supermarket chains to feature it on their shelves -- along with threats for failure to comply. ( United States ).

At this point, they will work to get the ruling government to allow them to rule themselves under Sharia, the Islamic Law. The ultimate goal of Islam is not to convert the world but to establish Sharia law over the entire world. When Muslims reach 10% of the population, they will increase lawlessness as a means of complaint about their conditions ( Paris --car-burnings). Any non-Muslim action that offends Islam will result in uprisings and threats ( Amsterdam - Mohammed cartoons).

From 60% you may expect unfettered persecution of non-believers and other religions, sporadic ethnic cleansing (genocide), use of Sharia Law as a weapon and Jizya, the tax placed on infidels:

Of course, that's not the case. To satisfy their blood lust, Muslims then start killing each other for a variety of reasons.
'Before I was nine I had learned the basic canon of Arab life. It was me against my brother; me and my brother against our father; my family against my cousins and the clan; the clan against the tribe; and the tribe against the world and all of us against the infidel. – Leon Uris, 'The Haj' It is good to remember that in many, many countries, such as France, the Muslim populations are centered around ghettos based on their ethnicity. Muslims do not integrate into the community at large. Therefore, they exercise more power than their national average would indicate.

posted on Dec, 9 2015 @ 12:01 PM
link
I've been to the UAE numerous times and never had any issues. I actually thought they were very polite. Liked how you can bargain everywhere including the mall. Each time I visited was while in the military. Maybe I was lucky???

Surely those statistics apply to any religion.
I just can't seem to think of any..........
anyone? 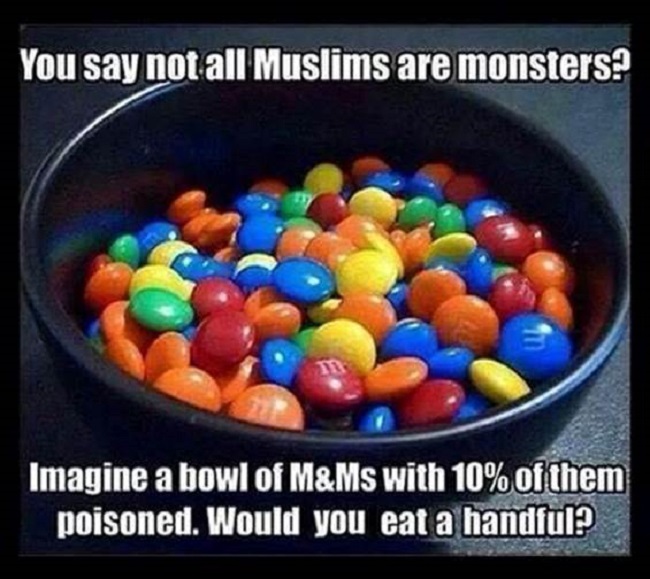 Are you suggesting we eat Muslims?
Well I guess they are halal after all.

If you believe in things that do not reflect reality, then your open to all sorts of fanatical delusions. Including killing innocent people.

posted on Dec, 9 2015 @ 12:33 PM
link
Classical Islam was intended as a complete theocratic system, with a single divinely authorized ruler. Unfortunately, this led to a schism on the death of its first leader, and Islam has been fighting itself ever since. Medieval Muslim philosophers developed the theoretical underpinnings of Sharia law, which tended to be very tolerant toward "People of the Book." It was the shock of losses.at the hands of barbarian, pagan peoples, followed by an awareness of the Islamic world's technological backwardness in the 19th Century that led to two different movements that have torn Islam even further apart:

On the one hand, you had modernizers and secularizers like Gamal Attaturk, who sought to create contemporary nation states. These modernizer s created Turkey, Egypt, and Iran. Another school of thought held that the Islamic world's economic and cultural poverty was due to its having strayed from a strict observance of Classical Islamic practice. When Sa'ud united the tribes of the Arabian peninsula and came into possession of Mecca, it was necessary to form a political alliance with the Wahabi, who wanted to restore.Medieval orthodoxy.

The bottom line is that Islam does not present an United front. It is in the midst of a period equivalent to Europe's Reformation. What has been going on in Syria is their Thirty Years' War, with hegemons using religion as.a.pretext for conquest.


Muslims are free to practice their religion in Europe and America, but they cannot impose it on others.
edit on 9-12-2015 by DJW001 because: Edit to correct autocorrections.

I could say the same thing about guns/gun owners, or men, or law enforcement officers, or...

posted on Dec, 9 2015 @ 12:47 PM
link
Contrived BS. Saying Muslims are conquering the world is crap. The ones doing that actually have air forces, aircraft carriers, cruise missiles and supersonic attack aircraft with drones, bombs, missiles and mechanized infantry. They actually invade other countries, all the while crying about some religion or other as the excuse for doing so.

What is true is Islam is different than the west in that they don't see separation of church and state the way we do. We have two authorities the Church (god) and the state (men).

They have only one, the will of Allah, as defined by elders or mulahs that interpret that to make decisions. These aren't 'elected' the way we do here in the west, they are renowned for their and wisdom and intellect and assume these positions. This is not governing of by and for men or the people, this is just interpreting the will of God, something in the west we claim to do too, by the way.

Their system sees God as in control (same here) and doesn't defer to men or governments, because only God, the will of God is true. Men and governments aren't to be trusted.

Thats why they laugh at western edicts that separate church and state, why they distrust our decisions for them to spread 'democracy' for instance, that is insulting to them, they don't vote for Gods will they just obey it as interpreted by their elders.

The twist in this article is that this means their religion is all and all encompassing to take over the whole world. Thats rubbish. They just don't believe in governments is all.

I'd say who does, but the government is so loud these days, the cry to war so fervent, the blaming Muslims for what we are about to do to them is screeching.

It is important to understand that in some countries, w ith well under 100% Muslim populations, such as France, the minority Muslim populations live in ghettos, within which they are 100% Muslim, and within which they live by Sharia Law. The national police do not even enter these ghettos. There are no national courts, nor schools, nor non- Muslim religious facilities. In such situations, Muslims do not integrate into the community at large. The children attend Madrassas. They learn only the Koran. To even associ ate with an infidel is a crime punishable with death. Therefore, in some areas of certain nations, Muslim Imams and extremists exercise more power than the national average would indicate.

Today's 1.5 billion Muslims make up 22% of the world's population. But their birth rates dwarf the birth rates of Christians, Hindus, Buddhists, Jews, and all other believe rs. Muslims will exceed 50% of the world's population by the end of this century. Was it not "Devout Muslim men" th at flew planes into U.S. buildings 9 years ago? Was it not a Devout Muslim who killed 13 at Fort Hood ?

Can a good Muslim be a good American?

posted on Dec, 9 2015 @ 12:56 PM
link
a reply to: intrptr
Like I said.. This thread is not to demonize a religion! If you have any relevant information on the statistics I'm all ears. Your opinion that it's BS is useless to me. Show me how the statistics are wrong with objective evidence.

Yah, you're not "religious or anti religious" just posting anti muslim hatred "to get feedback about statistics".

originally posted by: flyingfish
a reply to: intrptr
Like I said.. This thread is not to demonize a religion! If you have any relevant information on the statistics I'm all ears. Your opinion that it's BS is useless to me. Show me how the statistics are wrong with objective evidence.


Show us how the statistics are right with objective evidence.

originally posted by: intrptr
a reply to: flyingfish

Yah, you're not "religious or anti religious" just posting anti muslim hatred "to get feedback about statistics".

"anti muslim hatred" ? If it is true, how is posting facts hatred? I want know, is it all BS or is it true?

Let's stick with the facts, can you debunk them with evidence that says otherwise?

originally posted by: flyingfish
a reply to: intrptr
Like I said.. This thread is not to demonize a religion! If you have any relevant information on the statistics I'm all ears. Your opinion that it's BS is useless to me. Show me how the statistics are wrong with objective evidence.


The David Horowitz Freedom Center combats the efforts of the radical left and its Islamist allies to destroy American values and disarm this country as it attempts to defend itself in a time of terror.

Didn't really need to read any further. Also, when I googled the website I kept finding Frontpage Mag can't even do a 2 second google search to verify facts. So basically I feel this source is unreliable on facts.
edit on 9-12-2015 by amicktd because: (no reason given)


the radical left and its Islamist allies

Why does it matter if they are Muslims or not?
This could be said for humanity as a whole.

If you going to be an islamophobe, at least use valid arguments and not just some silly pictures.

From an anonymous police officer in the UK.

And 2.7% Muslim population in the UK? whoever records the stats are manipulating the figures. I would put money on the true figure being higher than France. Guess that would explain their ability to force halal meat on to us and unofficial sharia courts...
edit on 9-12-2015 by DAZ21 because: (no reason given)

originally posted by: DAZ21
Trump's statement on UK was right, even after his unfair criticism.

From an anonymous police officer in the UK.

And 2.7% Muslim population in the UK? whoever records the stats are manipulating the figures. I would put money on the true figure being higher than France. Guess that would explain their ability to force halal meat on to us and unofficial sharia courts...