posted on Nov, 22 2015 @ 11:16 PM
link
With all the arguing back and forth about refuges, I began to think about the ones that I have in my area. For some reason Alaska gets a surprising number of refuges from Ethiopia.

Believe it or not, my city of Anchorage has the most diverse neighborhood in America:


Mountain View, a northeast Anchorage neighborhood, boasts the most diverse census tract in all of America. That's according to University of Alaska sociology professor Chad Farrell, who analyzed the census data.

In fact, Farrell says the country's three most diverse census tracts are all in Anchorage, followed by a handful in Queens, as in New York, which usually tops everyone's diversity guess list.

And there has been new immigration to Alaska -- including refugees from troubled nations such as the Democratic Republic of Congo, Somalia, Cuba, Iran and Bhutan. Many have resettled here in Mountain View.

Omima Adam, a civil engineer from Sudan, arrived in 2010.

"I was so shocked when I saw all that snow," she says from the window of her food truck, Sultan Shawarma, parked between a Dominican place and an espresso stand.

"But I'd rather be cold than dead," she says of the bloodshed in her native Darfur.

She learned English and puts her heart and soul into her kibbes, shawarmas and falafel. She wants to turn the business into a full-fledged restaurant and return to college to earn an engineering degree that the United States will recognize.

So today as I was overhearing the TV news carrying on about refuges, I was browsing dutch oven recipes. I happened to find an interesting Somalian dish called "Doro Wat". It sounded awesome:

Wat is the catch-all name for a whole array of Ethiopian dishes that look like curries and act like curries, but often give a knock-out spice punch that few curries can match. Doro wat, which is virtually the national dish of Ethiopia, is a thick stew of chicken, egg and onion laced with the exotic sounding berbere spice mixture.

So I ventured out into the snow and made a trek across town to an international grocery store to find this curious sounding "berbere" spice blend...

After I got home it was time to get to work: 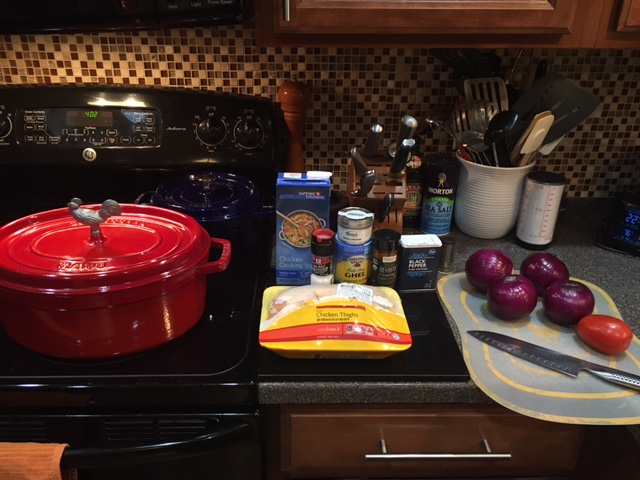 I had never used ghee before, or this "berbere" spice. 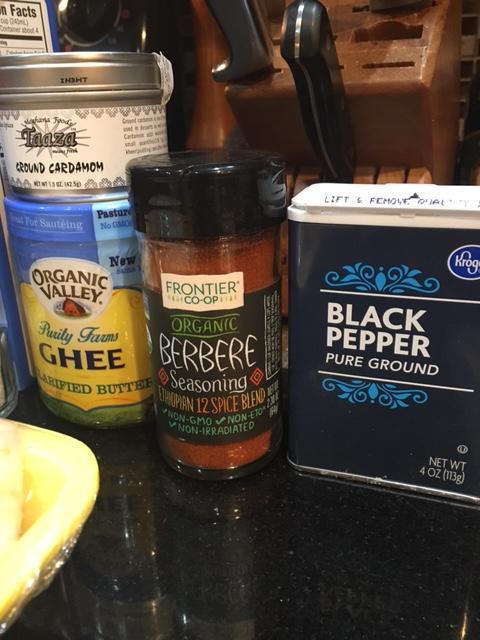 Cooking down the onions with garlic and ginger took over half an hour: 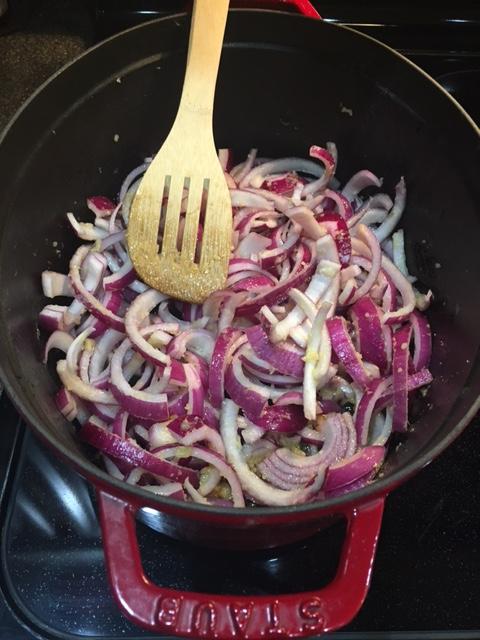 Finally they were soft enough to put the berbere spice and roma tomato. Then I kept cooking it down for another half hour or so: 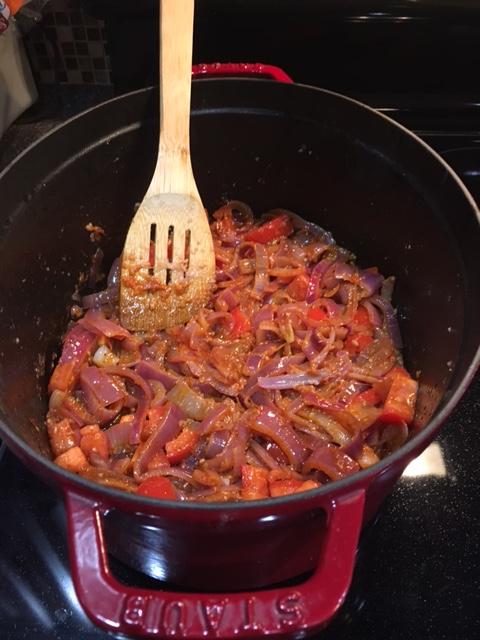 Then I added 4 cups of chicken stock (the recipe called for water, but another said stock -- I opted for stock). I put in my 3 lbs of chicken as well: 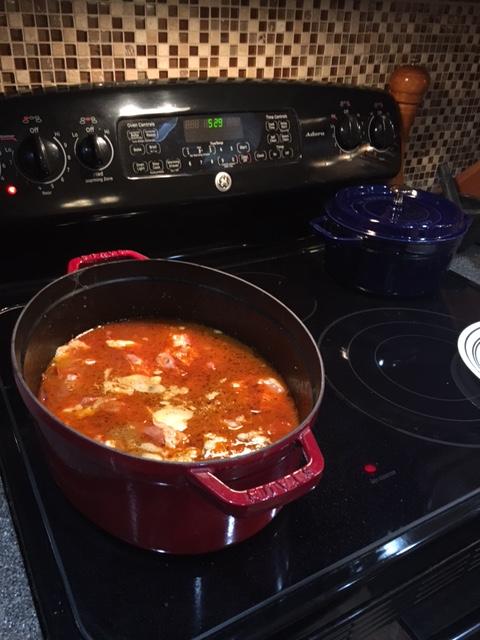 I brought that to a boil, turned the heat down to medium low and put the lid on for an hour: 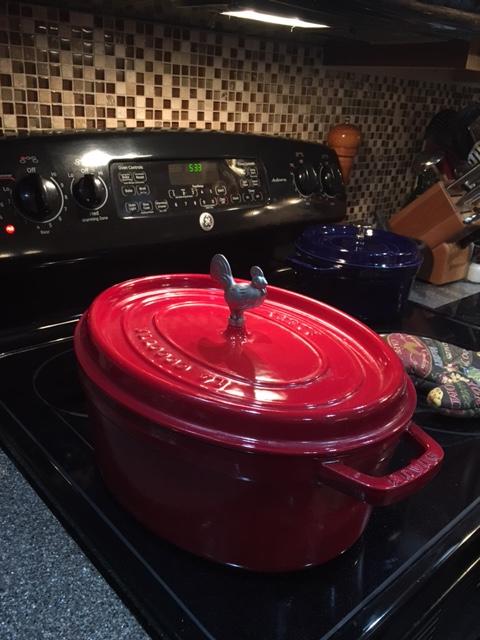 After the chicken was done, I removed it and brought the liquid to a boil for 20 minutes to reduce and create a more "sauce-like" consistency.

Here it is -- final plating. The tradition is to serve it with hard boiled eggs, which were surprisingly good for some odd reason. They seemed to help cut the "bite" of the spice and balanced the dish nicely. I thew in a piece of unremarkable bread just to soak up some of the sauce. 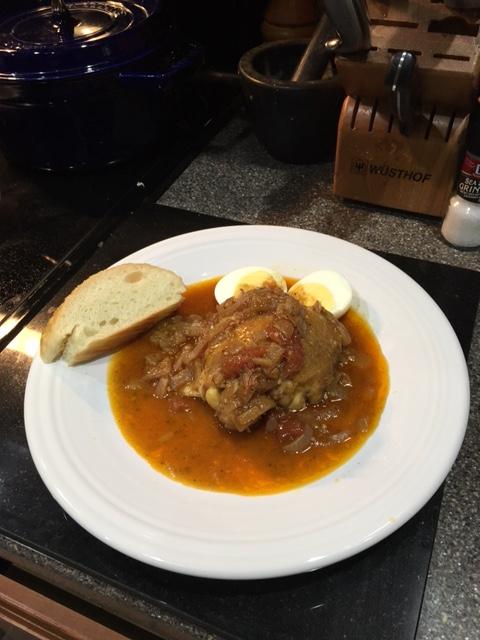 It tasted awesome! My significant other had seconds, and the I was really surprised at the complexity of the dish. The ground cardamon and berbere spices really created an intoxicating aroma in the house. The chicken was literally falling off the bones!

Lately we've been focusing on the negative aspects of immigrants and refuges. I wanted to post this to remind us all that some of the most awesome food we have here was brought to us by people fleeing to America. Shwarma, falafel...even Cambodian versions of Pho. We're a nation of immigrants, and one thing we all have in common?

We all have to eat! So tonight I turned off the TV news and the talking heads and enjoyed some good food.

If you think this looks good, you can find the recipe here at saveur.com

mmm yummy. And you have very nice cookware.

Thanks! It's been a slow process...I find that quality cookware lasts forever and is worth the extra cost. I have vintage kitchen gear from my grandfather that's over 50 years old...old sheet pans, spatulas and stuff.

I think an enameled cast iron dutch oven should be standard for every kitchen. Most people assume they're to expensive...there's an American brand "Lodge" that makes a really affordable one. Lodge was my introduction to enameled cast iron, and I still have it. I use it to make bread in 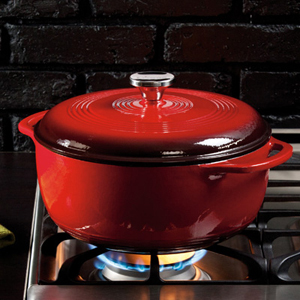 You just can't beat the even heating of these things. It creates a "mini oven" on your stove top. They're also oven safe, and make a great Christmas gift for someone!

I had to learn to cook for myself when I was single for many years. I learned that just like woodworking or building stuff...you need the right tool for the right job. Cheap, thin pots and pans that are the wrong size can work...but everything is so much easier and less stressful!

originally posted by: MystikMushroom
She learned English and puts her heart and soul into her kibbes

If this person is near where you live and you have not tried Kibbeh you need to try them.

My mouth literally watered reading about that! And your kitchen is beautiful! Must be nice to have a space so conducive to making good food!

Turning off all the negative "noise" about refugees and focusing on a positive slant is just what we could all benefit from.

but that dutch oven you have....

We have a ton of Ethiopians in Seattle too, I keep meaning to go try the food. I used to take a lot of cabs and really enjoyed talking to the drivers who were mostly from Ethiopia where I was. They compared the food to Indian, and I freaking love Indian food.

I had to learn to cook for myself when I was single for many years. I learned that just like woodworking or building stuff...you need the right tool for the right job. Cheap, thin pots and pans that are the wrong size can work...but everything is so much easier and less stressful!

Agreed. That is my advice to everyone who is trying to get into cooking along with use fresh ingredients and get some good knives.

Speaking knives I see we both use the same manufacturer.

posted on Nov, 23 2015 @ 09:20 AM
link
a reply to: MystikMushroom
You brought about another flood of memories. I had Ethiopian friends that I used hang out with when I was in college, a gazillion years ago.

We used to eat several times a week at the Ethiopian restaurant near campus. The food was fantastic and cheap. Doro Wat and Zilzil Tibs were my favorites. I never got good enough with the injerra to stop my friends from slapping my hands, playfully. They would say that is how their mother's taught them the proper way to eat, by gently slapping their hands when they got it wrong. It really is an art and takes more than practice, because I got a lot of practice.

but that dutch oven you have....

It's my pride a joy

I'll have to make some no-knead bread with one of my dutch ovens sometime and post about it -- you can make an honest-to-goodness artisan loaf of bread in under 6 hours from scratch.

I have never tried that spice but now I will look for it and give it a go. Thank you so much for posting this.

Ps: your significant other is very lucky to have such a wonderful home-chef!!

I just put that on my wish list. Knife brand recommendations??? Thx!

posted on Nov, 23 2015 @ 04:07 PM
link
Hmmm, I wonder what would happen if you cooked that bad boy down in a tajine? Although I'm not sure the tajine gets down into Ethiopia. I think it's more N. African - Morocca, Algeria, etc. My aunt got one for herself and loves cooking things down in hers. Also, they generally use a think sort of sour dough style pancake to eat with in Ethiopia (forget what they're called), but they tend to use those in place of utensils. It really sort of goes with the flavor of the dish. If you can find any, I suggest you try it out next time.
edit on 23-11-2015 by ketsuko because: (no reason given)

originally posted by: ketsuko
Also, they generally use a think sort of sour dough style pancake to eat with in Ethiopia (forget what they're called), but they tend to use those in place of utensils. It really sort of goes with the flavor of the dish. If you can find any, I suggest you try it out next time.


It is called injerra. Most Ethiopians tear off pieces of the injerra and roll the food into a small bite sized pockets to eat eat their food. They don't use forks, at least my friends didn't. In fact I remember one of them telling me that they didn't have a word for fork. The trick is you have to pick the food up from the plate, while rolling it up in the injerra, then eat it. But you have to keep your hands and fingers clean. It is wasn't easy for me, so I got my hands slapped a lot. Injerra doesn't keep, so you pretty much only make what you are going to eat for the day.

edit on 23-11-2015 by NightSkyeB4Dawn because: Accidentally posted before completing.

I remember only that we ate at an Ethiopian restaurant that served food with them and not utensils although the utensils were available on request. The food was different but very good and the pancakes were also really good. We were a bit confused until we saw what everyone else in the place was doing. It was a bit wild to eat in a restaurant that has actual table linens but no silverware on the tables in the states.

posted on Feb, 8 2016 @ 02:45 AM
link
I've got the seasoning (berbere) and I'm going to try this dish this week. I've been venturing out with my recipes lately and this seemed like a great one to try.