Who is truly in control?

posted on Nov, 22 2015 @ 09:42 AM
link
With the powers that intelligence agencies have in today's world, especially now in the era of smart phones, SMS, social media and email, the idea that politician's as opposed to private interests might still have true political control over governments seems farsical, to me at least.. No, the way is see it is, the world we are living in is far more likely to be one where maybe one or two legitimate democracies might still exist, where loyalties to the central government / the established order remain strong, but the rest have a probably been usurped by vested interests at this point...

This is of course wild speculation, but evidence seems to pouring in from all over the word, that corruption and criminality among governments is at an all time high, and that does not correlate at all well with the fact that intelligence agencies have more power than ever to both detect and investigate corruption in public office. Perhaps they are simply not looking (unlikely) at public servants, and instead focus on other forms of criminality, however, if they are and do detect corruption, the potential for blackmail and further corruption of governments is scary to even contemplate.

Who is truly in control? 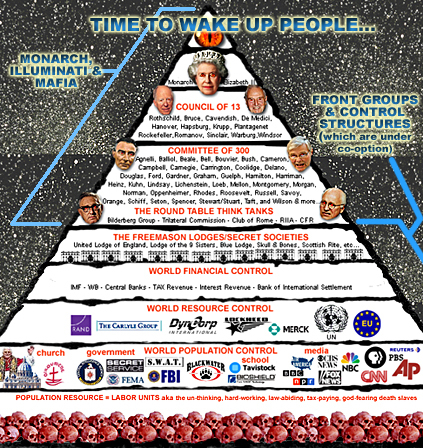 The leaders are not even 100% human. The Arcons, Draconians and Annunaki are pure evil and have been in control since the Sumerian era 400,000 years ago.

I think you make some very good points. And as mentioned by others "follow the money". One individual in particular always seems to benefit and also stimulate global upheaval is George Soros. He has made trillions over the years by supporting and/or creating unsettling news involving financial markets. He owns or his companies are behind dozens of trouble-making elements. Just do a search if you don't believe me. Follow the money if you can......but he hides it in so many places that it is almost impossible to trace. In my opinion, a truly bad, bad individual.

The leaders are not even 100% human. The Arcons, Draconians and Annunaki are pure evil and have been in control since the Sumerian era 400,000 years ago.

If that were true they wouldn't need the NSA data center because they would already have alien technology and could easily monitor us from the stratosphere or low earth orbit.

It's nice to paint them as alien or demonic, if it makes you feel better, but they are basically vile humans.

Strange, I come to precisely the opposite opinion. Because of the massively increased spread of information in the past 30 years we hear of many more instances of corruption and can respond appropriately. It's not that corruption is at an all time high, it's that we're finding out about a lot of it and then replacing those people.

The so-called "clash of civilizations" we read about on the corporate media is really a war between banking systems, with the private central bankers forcing themselves onto the rest of the world, no matter how many millions must die for it.........


So off to war your children must go, to spill their blood for the money-junkies' gold.
We barely survived the last two world wars.
In the nuclear/bioweapon age, are the private central bankers willing to risk incinerating the whole planet just to feed their greed??

When i look back at our history one thing that's strikes me is that nothing except technologies have changed, we are being taught the same old type of thinking that we have been for hundreds if not thousands of years....

Things are constantly evolving. And everything you do say and think counts. But never let that put you off being.

But you are a human being. The only thing in your life entirely out of your control is the past.
edit on 23-11-2015 by 0hlord because: (no reason given)

You can look back down a certain line that far sure, but you can't change anything

Control isn't in the hands of network trolls and news enthusiasts. Control is in the hands of who owns the actual physical property, who owns the greatest weapons cache and who owns the bank system. True power and control is non-negotiable, cannot be intercepted or encoded. When domination is demanded all the action comes unannounced as who is "in control" reassert themselves and what they physically own.
edit on 1-12-2015 by SurfinUSA because: (no reason given)