It said the holder of the Syrian Passport entered via Greece Oct. 3rd...

It did not say he was a refugee.


He was a TERRORIST. He murdered people.

How hard is this for you to grasp?

You seem crazily confused? What are you talking about?

The question was whether he arrived with the refugee migration or if he simply boarded a plane and rented a room someplace to plan.

The poster claimed he arrived with refugees. That is not supported by his link, nor logic IMO.

Not whether or not he was a terrorist??

For the record here in the states many N African muslims claim white in the courts. Just because a passport says white doesn't equal "European"


originally posted by: PublicOpinion
a reply to: Indigo5


They've edited the article and headline, but anyway:

Investigators also told French media a Syrian passport, belonging to a man born in 1970, and an Egyptian passport had been found lying close by the bodies of two other jihadis, both of whom blew themselves up in the course of their attacks.

It said the holder of the Syrian Passport entered via Greece Oct. 3rd...

It did not say he was a refugee.

From a pure strategic standpoint...Moving operatives to specific planned locations/times etc. ...A refugee caravan is insanely unreliable..you don't know when and where that person will arrive..

Why not just have them board a plane with a passport and fly comfortably where you need them....with money in pocket and resources??

I understand the convenience for ideological purposes of claiming that terrorists sneak in with refugees...but apart from fear mongering purposes...it makes no sense for a terrorist operation.

It would be hard to begin coordination and planning when you terrorist plant is lost walking on some railroad track half starved or gets repeatedly re-routed or denied at border crossings.

ISIS has money and means...they needed these people at precise places, well funded, well prepared, in good health and on time. They didn't send them in refugee caravans.

Well said, but the cat is out of the box and they will go with the refugee-spin regardless. I'm just finishing the sublime in between those lines, but thanks a lot for pointing that out. My mistake, didn't explain the whole plethora of meanings for the word 'Syria' only in this mess of crisis the fearmonger created here in Europe.
This hardcore-editing on the guardians behalf is another part of the story, their editor probably realized that right now.

Funny thing is... most refugees don't get registered before they arrive in Germany, that's another hint for me. I can imagine that those situations would be the end of the journey, hence people tend to avoid them and pay high bills to travel via illegal means instead.

originally posted by: ThirdEyeofHorus
a reply to: Indigo5

For the record here in the states many N African muslims claim white in the courts. Just because a passport says white doesn't equal "European"


Witnesses claimed him as white...Not his passport...Just for the record.

The French newspaper Liberation reported that one of the gunman who carried out the Bataclan attack has been confirmed as a French-born extremist who was known to police. He was identified by his fingerprints.

Albeit the above might have been a different attacker...

Either way...Apparently French Natives and White people were involved..

And no...A refugee train is not the way to move operatives.


...A refugee train is not the way to move operatives.

yes it is but we will see if it is part of this op or not.

their goal is very simple and that is to not get caught before the strike.

newsnoz did you hear from your niece yet??? ( you said she started a great job in Paris 4 months ago) I read most of the thread may have missed a few pages toward the end, so if you posted I missed it.

The French are also saying at least two refugees who came through Greece are "being sought." I haven't nailed down what exactly they mean yet.

Also, two Americans from California have been identified as victims along with one Brit so far.
edit on 14-11-2015 by Shamrock6 because: (no reason given)


There was no ISIS as the War on Terror started, was it?

Yeah there was it was called Al Aqueda and every other two bit Sunni extremists.

Take a good look at the TERRORIST attacks during the CLinton administration. Then take a pit stop during FDR.


Ibn Saud had conquered most of the Arabian peninsula and consolidated it into one kingdom with the help of the fanatically religious Wahhabi Bedouins, who believed, among other things, that dying in battle was a ticket to paradise, that all images, from pictures to statues, had to be destroyed, that drinking and smoking and singing and dancing were sins punishable by whipping, and so forth.

Then take a left at the crusades, then a right at the muslims conquests.

Then stop at the birth of Mohammad.

Cause the middle east has long been screwed up before America, and the Europe ever got involved.

posted on Nov, 14 2015 @ 02:47 PM
link
My news app just posted that they're seeing a buzz on social media about a "huge police response" in the 15th arrondissement but no details yet

UPDATE - heavy police response to Hotel Pullman, police conducting search of hotel
edit on 14-11-2015 by Shamrock6 because: (no reason given)


UPDATE #2 - search being conducted by heavily armed police in assault gear.
edit on 14-11-2015 by Shamrock6 because: (no reason given)

I'm following a twitter feed from a Fox News reporter staying at the hotel. She's stated they're going room to room as we speak.

posted on Nov, 14 2015 @ 02:58 PM
link
a reply to: Indigo5
And how does Frenchborn even make him "white" as we all know anyone can emigrate to anywhere......Tunisian are in France.....
When I was in Tunisia there were news reports of British muslim being recruited into terrorism.
Let's be real here.... we have an Iranian born muslim right in the WH so please do not be so darn foolish and naïve about this.
While you admit that the US is not necessarily responsible for "ceating" ISIS you DO seem to believe it's about being "white" and Im just correcting that for you.
But I do see your point about it not necessarily being refugees. Is your point more that we must take in refugees from Syria because they are all innocent?


And no...A refugee train is not the way to move operatives.

maybe maybe not as we all know our own Prez was moving people by airplane and disappearing them anywhere into the states....the big movers and players are doing anything they want and getting away with it. I maintain that much of this does involve big players in some way whether it is moving people or arms or drugs or whatever or training or in general stirring up stuff and recruiting whatever else may be going on....as the late Antony Sutton said, the NWO uses "conflict management" in their Hegelian game plan and there may be old conflicts or new it just doesn't all happen by accident. Problem/reaction/solution all for the creation of their New World Order Totalitarian prison camp.
As a point of interest after going thru that entire article and video the French President stated that it was believed to be ISIS with inside help ....meaning someone from inside the country. Absolutely nothing about the ethnicity there it could be any ethnic group. You seem to have inserted your opinion on that for whatever reason.
edit on 14-11-2015 by ThirdEyeofHorus because: (no reason given)

ETA - Champs de Mars subway station closed by police. Responding to an "incident" not specifying what yet.
edit on 14-11-2015 by Shamrock6 because: (no reason given)


originally posted by: DrakeINFERNO
a reply to: Avicenne


you are wrong, those who are having to live with this immigration are the losers.


So far none of any of the attackers have been identified as "immigrants"?...who by the way are actually fleeing this extremism and violence, not bringing it.

I have heard about Belgian, French and Egyptian passports and at least one "French National" and one "Belgian National" thus far..

Where did you hear "immigrants" were responsible ?...apart from your that screaming skin headed devil on your left shoulder.


"At least one of the terrorists responsible for the slaughter of 129 people in the Paris terror attacks was a Syrian refugee, officials have claimed".
www.express.co.uk... 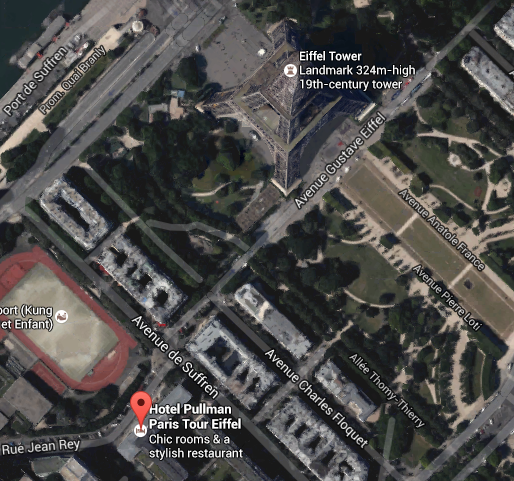 Cause the middle east has long been screwed up before America, and the Europe ever got involved.


These "hate" mongers are pathetic ...

It's about 3 blocks southwest of the Hotel Pullman.
edit on 11/14/2015 by EternalSolace because: (no reason given)

The pics I'm seeing posted looks like there's a credible threat. Officers are all taking cover behind vehicles and concrete, etc. nobody is out in the open, everybody has weapons drawn and at the ready.

originally posted by: Shamrock6
a reply to: EternalSolace

Champ de Mars is the metro beside the Eiffel tower, if I remember right. Any more news on what's going on? My husband just said there was something happening there?

Nothing other than what I've posted so far. Solace is watching Twitter and I've got a news app I use that collates info from a wide range of sources. Updating as we get it