When One becomes attuned to The Akasha they are able to gather information.. "What was, What is, What will be..." It also allows One to see further down the time spiral, this to avoid any pratfalls.

It was the same 'thing' Yoda was pushing....

So they probably DO have something to do with time travel, that is, if we can figure it out.

'Yes' but You're looking at it from a 'body' that occupies 'space/location' This is an illusion. You ONLY know time/space because of the body providing You a location. That 'body' is stuck on this 'time spiral' but You are NOT. "You are not Your body" - Jesus The Chris†...

You're currently in Your living room because that is where Your body is currently. Notice the use of the word 'current'? This both symbolizes 'time' but also what You truly are : "Energy"..:

There is absolutely zero evidence that we 'are' anything but our bodies. When the body dies, you die. Simple as that.

originally posted by: veracity
Does anyone have any experience with seeing lines, possibly linked to being psychic or seeing dead people? .

Spirits use them for navigation purposes when jumping from their world to ours.

Good Luck with that...

Jesus Christ was so before his time, sometimes I wonder if by "God" he meant "universe" but there were no words to describe something so expansive.

So you see them too, can you please tell more?

I don't see them however, my friend does and her daughter is beginning to see them as well. That was the first thing she started to see before she figured out her gift.

She was in and out of psych wards. Her mother knew of this "gift" but never told her about it. I sort of understand that maybe she was trying to protect her? I dunno. I would tell my daughter so she didn't feel nutz.

Must feel powerful to think you know everything about dying and death.

originally posted by: veracity
So you see them too, can you please tell more?


Apparently the world is shifting into a higher frequency right now so you should be able to see many interesting things soon.

The visions occur when i suffer a minor seizure. During a seizure, a persons brain activity is raised and a sense is heightened like taste or hearing.
Half way down the following page it shows what i saw during a blackout in late 2014.
www.abovetopsecret.com...

Here are the navigation lines from a vision verified by a fallen angel at www.scribd.com...

"Michael turned his head to the left and gazed through the window into the world beyond. The first noticeable fact was that the sky was black. There was no moon, clouds or even stars. The only objects that occupied the landscape were all that had been constructed by man which consisted of houses, walls, roads and lampposts. No houses were lit with artificial light. Every street light was either broken or not working. The landscape was lit by lines of primary colors that would follow the edges of certain objects. The roof top of a house opposite him on the other side of the road had a horizontal thin blue line. A lamppost in front of the same house had a vertical yellow line attached to its edge. A horizontal red zigzag line followed the top of a wooden picket fence along his next door neighbors’ hedge. As his eye sight grew more accustomed to the darkness he could see that all plant life had turned to dust. The land was now nothing more than mounds and hills of brown and gray dust. It was absolute desolation."

The story, about demons and hell, so he saw the lines. What were the lines to him in the story? Ways to travel that he could not take bc he was being pushed to hell?

originally posted by: veracity
Was that an actual picture of what you saw? Or a recreated picture to show what you saw.

The story, about demons and hell, so he saw the lines. What were the lines to him in the story? Ways to travel that he could not take bc he was being pushed to hell?

Yes, the vertical rainbow descended from the sky in my right eye as shown. My left eye was still seeing everything as normal. Then when the rainbow struck the ground everything transformed into a paradise.

The grass covered in frost turned prime green. The dark sky at dawn turned blue and the nearby car turned bright red with no scratches.

The vision of hell showed the ley lines as primary colours red, yellow and blue. The lines to him in the story was all that was illuminating the wasteland. He didn't understand how to travel. He didn't get a chance to find out as the wraith just grinded him down into the dust.

into a paradise? a rainbow delight? describe what you call "paradise" best you can please.

oh, so he had just died and he could see these lines but could not travel on them bc he was pressed into hell/dust. Why was his mother so sad? Was she in hell or limbo as well? sad

originally posted by: veracity
into a paradise? a rainbow delight? describe what you call "paradise" best you can please.


Well it was 6:41AM and it was still dark. The grass was covered in frost. The road and pavements had standard roadworks of concrete and tarmak.

During the blackout, the sky went blue with white clouds. All plants and grass went prime summer green. No roadworks, everything was perfect. There was also warmth of summer even though it was late November and freezing temperatures.

oh, so he had just died and he could see these lines but could not travel on them bc he was pressed into hell/dust. Why was his mother so sad? Was she in hell or limbo as well? sad


She (my mother) did witchcraft and was nothing more than a slave (pawn) to do what the wraiths (rephaim) wanted her to do. She was sad because there was nowhere out of the prison. The closest she had to Heaven was trapped in that single room where daylight could still be seen.

She was in the angel prison Tartarus that imprisons fallen angels and the rephaim.

i could not travel on the ley lines because at that time i didn't know what they were. Thanks to an angel, he verified that leys lines are coloured that way in Tartarus.

So you wrote this short story, is this fiction? Did you really die, was pushed to hellsand and came back to life to tell?

originally posted by: veracity
So you wrote this short story, is this fiction? Did you really die, was pushed to hells and and came back to life to tell?


The rainbows are only visible when the brain is in heightened activity which is what happens when a mortal suffers a epileptic seizure. If a person fights the attack then they can see things and commune with the spirits.

Yes, some stupid idiot sprayed that sign probably didn't know what they were doing.

In 2005 i went in for a brain operation. The story was a real-life vision verified by the fallen angel Anael who explained how the 'veil' between this world can be shattered with morphine.

So according to my logic, one moment i was going to sleep seconds before the brain operation. Then the vision occurred so naturally i assumed that the operation had gone fatally wrong resulting in my death and i had gone to hell.

As for hell, i have seen them all. i am already up to my left ankle in the Lake of Fire. The film 'Constantine' is surprisingly close to what it is like down there because no one can scream sound with no fleshy lungs left. So all that is heard is the wind and the flames.

The following picture shows a out-of-body-experience during another black-out where a djinn (Shaytan class) is hooked to my left shoulder. 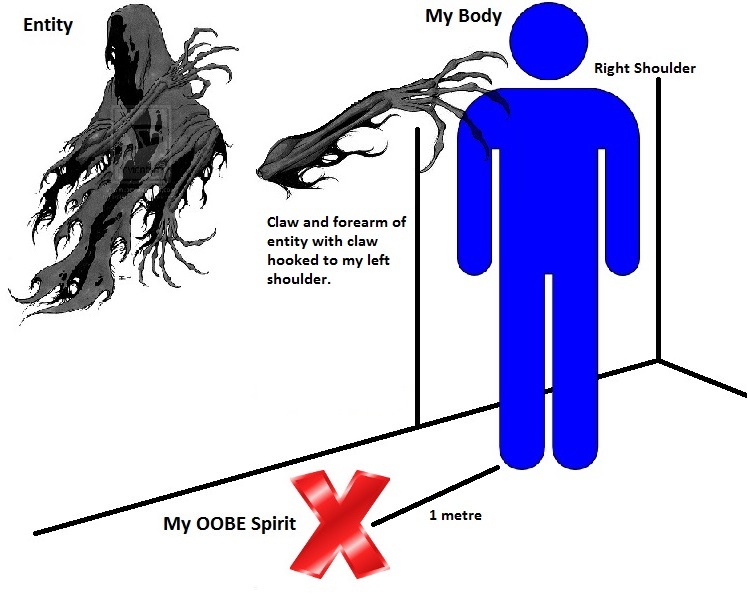