Contrail or Chemtrails, abruptly ending at Canada US border, HUH?

posted on Oct, 1 2015 @ 01:32 PM
link
I normally don't post in this area, but returning from a trip yesterday from Ontario to Sarnia and crossing into the US triggered some major interest.

Here we were about 20 miles from the border going westward when I noticed some very, very evenly spaced trails in the sky, all going east/west. Then looking ahead, all the contrail/Chemtrails cut off at what seemed the border. I bought this to the attention of my wife that this was very odd. Either they cut off the spraying before the border or each plane must have shut off it's engine. Or perhaps just dropped out of the sky. I counted over twelve trails, each ended well to the east and stopped before the border.

Wind may have lined them up came to mind, but as I got close and pulled into the parking lot to buy at the duty free store, I looked over the river. Yup, there were some trails over there as well, all of them going north and south. Looking south and north confirmed that these trails did indeed stop in a row, just east of the river and border. Draw twelve parallel lines in in one direction, stop them evenly and then some parallel lines ninety degrees to those and sketch a river between. That is what I saw.

I am not here to convince anyone of anything, just putting this out there. Logic prevails here as I am sure that in the real world of contrails this would and could not happen. But then someone may get so desperate as to try and explain this away. Perhaps a large mother ship sucking up airplanes, cloaked over the river.

You said there was a river nearby?

Contrails can stop in the presence of a local change in atmospheric conditions. One place is cold and the contrail shows up, and the other place is hot so the contrail disappears. I would propose that the river's evaporation caused a local zone in the atmosphere in which contrails were less likely to survive.

Oh, and by the way, S&F for sharing and taking the time to write a clear and detailed OP.

Yes, a wide river in still air could do this, but we had fairly high winds which were from the north west making this not an issue. I even considered the water effect, but having an e/w orientation, a break of a quarter mile and then a n/s was an impossibility. Had a plane gone across the river leaving a contrail and was interrupted by an inversion or such, it would have continued on the opposite side, even going in the same direction.

posted on Oct, 1 2015 @ 01:55 PM
link
Good point and would be true perhaps for one or two, but these went for many miles north and south, each stopping right at the border, think evenly spaced and a cut off line like cutting fabric.

Then I can only agree with Zaphod - the planes probably dropped to an airport.

You said you were next to Ontario - is not Mirabel International Airport nearby?

Baseless assumptions from the one person in America without a camera phone. What's to say wind isn't actually ghosts?

posted on Oct, 1 2015 @ 01:58 PM
link
Not to claim that this answers your question, but it's related and I though cool enough to mention. Last week flying from Philadelphia to Bangor Maine, I saw this: 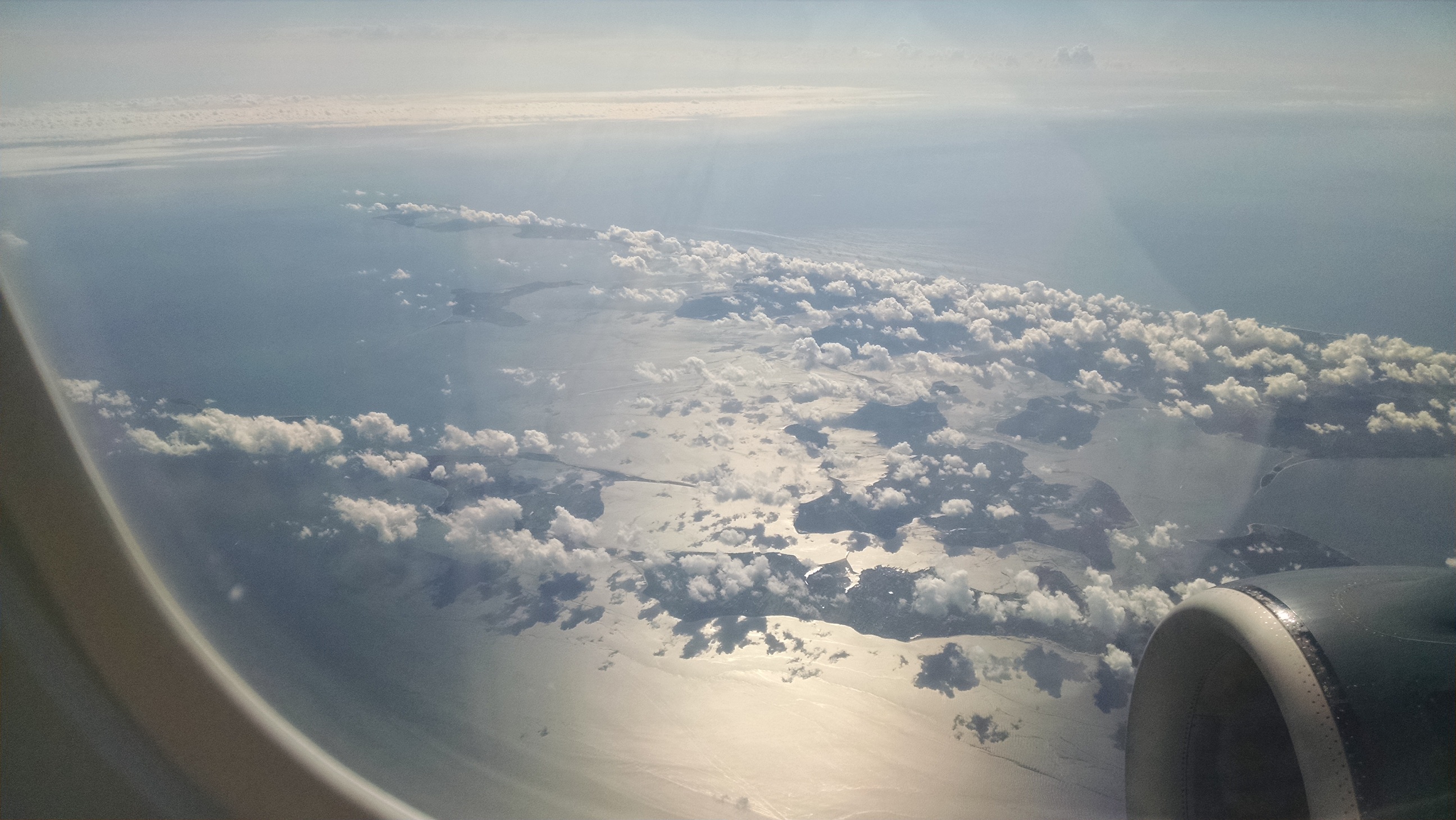 If you notice, the clouds are all directly over land and the water did not have clouds over it.
I realize these are low level clouds and not at all the same thing as man made cirrus clouds (which is what contrails are), but cool none the less.

Rather than assume a global conspiracy, you could use a flight tracking app for your phone and see what planes left those trails and where they were flying to.

Or.....buy some gas masks and spend the remaining years tucked away in a bunker.

And flights arrive in groups all the time. We used to have all the Asian flights arrive within a couple hours of each other. A lot of them were back to back.


Rather than assume a global conspiracy, you could use a flight tracking app for your phone and see what planes left those trails and where they were flying to.

But it's more fun to assume a global conspiracy exist...truth no fun...yuck.

posted on Oct, 1 2015 @ 02:05 PM
link
Incidentally, I have seen a plane turn around, 180 degrees and head the opposite direction. All the while it was leaving a huge trail.

I relate this to your report, as it happened absolutely at the Oregon/ California border. It came from and returned to Cali.
It was over deep, deep forest. Therefore, unlikely that people except for mountain men like myself could see this happening.

Out toward the coast, no airports to accommodate such a plane were remotely near.

Strange to see an airliner do a U turn; and it occurring right at the border, in middle of nowhere, seemed significant to me.


Actually this is neat. So all we need to do is photograph a trail persisting in both countries and we can prove chemtrails are actually just misidentified contrails. Who would have thought it was this easy to find the truth?

posted on Oct, 1 2015 @ 02:15 PM
link
Folks, like I said, not here to convince you of anything, but the science side of myself, including being a pilot and sailor I have seen a lot and this stood out as being not normal.

I am heading back to the cabin, off grid style so will defend my side mildly. Being a snow bird, I do sail in Fl. and one day while working on my place I watched planes go back and forth over Fort Myers, assuming them to be contrails but wodered otherwise. Slowly the trails came together and drifted towards our community while sinking lower and lower.

I steppeed out doors later and found myself in this cloud that had settled down while starting back on my project. I was confronted with a strong industrial smell which took me back many years ago to Detroit when it was in it's heyday. In fact it was so strong of chemicals, I was thrown into a fit of coughing and asthma.

This section of Fl. does not support industry, but that cloud was more than jet fuel, it was detroit at it's worse. Out if here, stay happy, got to work on a GPS for further sailing.

As a Pilot, I assume you are aware of the factors that enable contrails to form. Knowing that, I am just a bit confused as to how any validity can be given to the chemtrail debate with those facts in hand. (I have no need to convince you of anything, just asking.)

It doesn't matter if there were no airports nearby. If they're leaving a trail they're not going anywhere nearby.

Planes turn around for various reasons. They may have had a problem and had to return.

Canada has the weather modification act. The US would have its own legislation. I would assume that they cannot cross the border spraying.

Hmm......really? What sort of "seat" are you talking about?? Both became members in 1945, and of course the USA has a permanent seat on the security council.....

To hold a seat at the UN is extremely expensive. Any who, Canada and the US get to spray away, but since they are different corporate entities, I would think that they would have to legally stop at the boarder line.

originally posted by: Zaphod58
a reply to: sailormon

That's the answer. Quebec City, Ottowa, Toronto, Winnepeg, Ontario, are all wiithin 120 miles of the border. Airlines begin a descent with reduced power at least 120 miles from the destination to allow a gentle 500-1000fpm descent. Reduced power means a reduced H2O emission and the descent means warmer air, by about 2 degrees C per 1000 feet. And it's been my experience that the relevant ARTCC will start the descent before the handoff to the Canadian controller. For example, the ROGSA Standard terminal Arrival for Quebec City requires you to be down to 14,000 feet 42 miles from the airport over VILGO Intersection. From 39,000 feet that requires a loss of 25,000 feet. At 1000 fpm that would take 25 minutes at an average of 400 knots, or about 160 miles. So Boston Center would start you down before the border in order to make the Vilgo crossing restriction. So it's not a mystery, it's SOP for the airlines.

Guess the mystery has been solved they have white lines in the sky.