Pharm. Company to Roll Back Pricing

posted on Sep, 22 2015 @ 08:41 PM
link
Turing, the pharmaceutical company being ran by Mr. Martin Shkreli, has decided not to hike up the price of the drug Daraprim, after widespread backlash on social media and even by Presidential Candidate (/soul-eating demon) Hillary Clinton.

From the CNBC article:


The pharmaceutical company boss under fire from Hillary Clinton and many others for jacking up the price of the drug Daraprim 5,000 percent overnight said Tuesday he will lower the cost of the life-saving drug. Martin Shkreli did not say what the new price would be but expected a determination to be made over the next few weeks. He told NBC News that the decision to lower the price was a reaction to outrage over the increase in the price of the drug from $13.50 to $750 per pill. "Yes it is absolutely a reaction — there were mistakes made with respect to helping people understand why we took this action, I think that it makes sense to lower the price in response to the anger that was felt by people,"

You can't save face now, buddy. Nice try though - at least by not hiking the price up as much he shouldn't be violating as many human rights as he would have.


Democratic presidential candidate Hillary Clinton was among those who expressed outrage over the price increase. She called it "price gouging" and on Tuesday outlined a plan she said would limit how much patients are have to pay out of pocket for medications each month. "And I think in the society we live in today it is easy to want to villainize people, and obviously we are in an election cycle where this is very tough topic for people and very sensitive.


Wonder how many death threats he received. He's now planning to change his twitter account to "private". He was such a toughguy on twitter, I'm sad I won't be able to read his pompous "tweets" anymore.


Shkreli said on Twitter Tuesday afternoon that he planned to "set the record straight on misconceptions and announce some adjustments to our plan." He planned to make his Twitter account private after that.

posted on Sep, 22 2015 @ 08:53 PM
link
It's such a large spike--too large. He couldn't have gone into it not expecting backlash. Makes it seem like a pointless move made for who knows what.

posted on Sep, 22 2015 @ 08:57 PM
link
This drug started to be manufactured in like 1956 or some where around there. The patent time should be up so generic alternatives should be available.

Everybody knows his name now... it would've been an extremely effective publicity stunt.

Either way, that guy's heart is probably black and shriveled-up, he's got to be a sociopath or some other issues going on. He is everything that is wrong with wall street/big money/big pharm.

It looks like there are alternatives Alternatives to Daraprim
edit on 22-9-2015 by FamCore because: (no reason given)

posted on Sep, 22 2015 @ 09:00 PM
link
Hmm, he wants to double the price of his pills but he knows there will be outrage so.... he puts the price up by thousands of percent and everyone shouts "Thats outrageous"
He drops the price back to double and everyone is happy.

The sheep are so easy to manipulate.

for those of you interested in putting a face on this shyster: 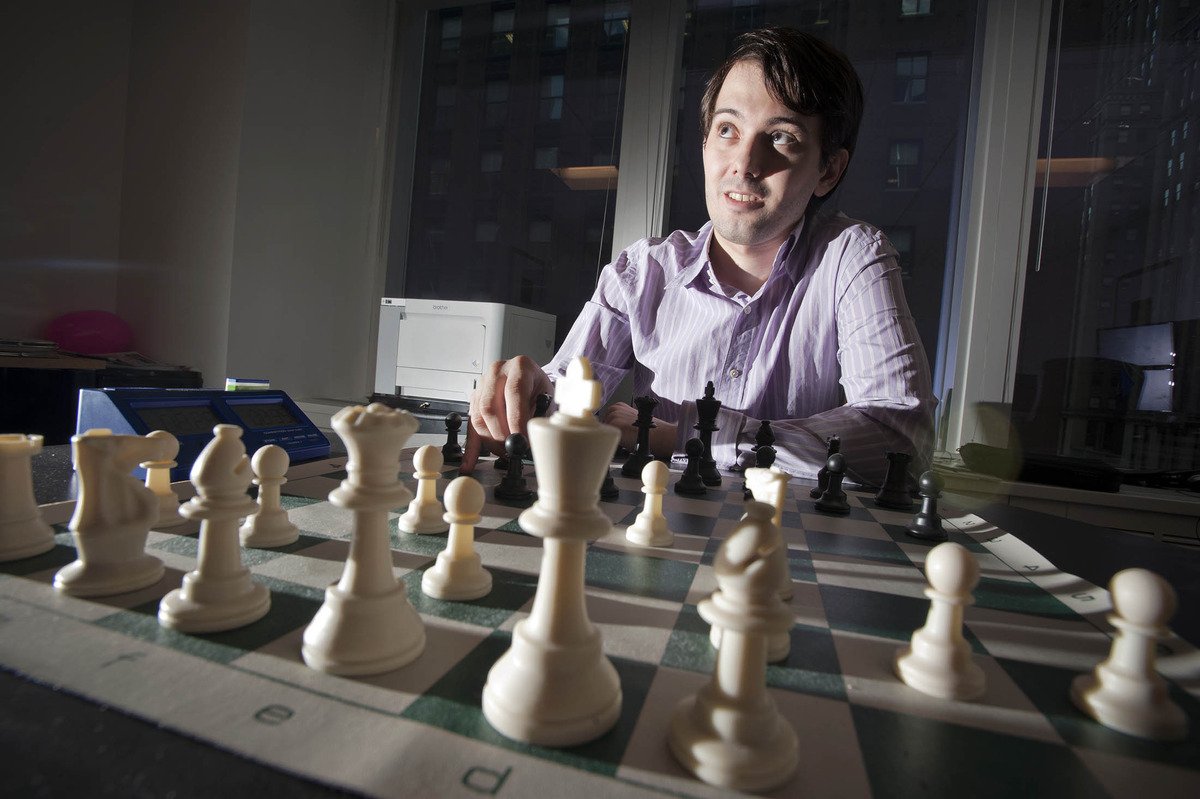 
“We have agreed to lower the price of Daraprim to a point that is more affordable,” Shkreli said Tuesday in an interview with ABC News. He didn’t say what the new price would be.

Turing acquired an older antibiotic drug, Daraprim, in August and soon after that raised the price to $750 a pill from $13.50. Shkreli was criticized by Democratic presidential candidate Hillary Clinton on Monday, who called the price hike “outrageous” on Twitter and responded with a proposal to cap consumer spending on drugs. Clinton’s tweet caused the Nasdaq Biotechnology Index to slide, losing more than $40 billion in market value on Monday.
www.bloomberg.com...

Bolding emphasis mine. Losing more than $40 billion in one day can truly cause one to change their mind!

Here's a bit more about the guy:

Martin Shkreli (born April 1, 1983) is an Albanian American[1] hedge fund manager and entrepreneur, specializing in healthcare businesses and is a co-founder of MSMB Capital Management, of Retrophin, Inc. and the founder of Turing Pharmaceuticals AG. He is a co-founder and was the Chief Executive Officer of Retrophin LLC, a biotechnology firm founded in 2011.[2][3]

In September 2015, he was criticized by several public health organizations for obtaining manufacturing licenses on old, out-of-patent, life-saving medicines including pyrimethamine (brand name Daraprim) and increasing the prices of the drugs in the US, sometimes by more than 5000%. Pyrimethamine is listed in the WHO Model List of Essential Medicines, a list of the most important medications needed in a basic health system. He was accused of manipulating the price and taking these basic drugs out of of reach of millions of needy patients worldwide.[4]
en.wikipedia.org...

A publicity stunt would make sense, especially since all of this happened overnight, but for what? What good could this possibly do for him as a businessman?

originally posted by: VoidHawk
Hmm, he wants to double the price of his pills but he knows there will be outrage so.... he puts the price up by thousands of percent and everyone shouts "Thats outrageous"
He drops the price back to double and everyone is happy.

The sheep are so easy to manipulate.

Yup he is playing the public like a fiddle, btw this was not the first time he did outrageous price gouging he did something similar to pay back pissed off hedge fund investors that lost money because of him.

Tons of people were applauding him on twitter - people/organizations in pharmaceuticals condone that behavior and it was obvious from some of the things he re-tweeted that even though there was a lot of hate towards him, there was also a lot of praise and admiration from other sociopathic securities traders and the like

posted on Sep, 22 2015 @ 11:07 PM
link
Good to hear that they are bringing the drug down to proper prices. It only costs about twenty bucks for thirty pills in England.

That's what's so ironically sad. The price of the majority of pharma drugs compared to what they cost to make is outrageous, with oftentimes a several hundred percentage markup per pill. It's ridiculous and not right, but where's the outrage?

posted on Sep, 22 2015 @ 11:43 PM
link
The largest outcry I've seen so far and I'm glad that the choice was immediately changed due to such a drastic and quite idiotic change. As someone said on FB. It will probably be 749.99; but glad to see that the price will return to it's normal which I'm sure may still get some outcry.

Apparently the drug interferes with folic acid and prohibits certain bacteria from reproducing, especially when taken with sulfonamides. Estimates for presence of T. Gondii are widely varied, depending on which site you access, some glibly saying as much as a 1/3 world infection rate, other sites suggest 50% or higher, even in civilized places. Websites which cite such figures are typically rife with pictures of the bacteria T. gondi and subsequent carnage. There are descriptions of how the male of the species will be less risk averse, and the female will become more compliant, as effects of the infection. It sounds like an easy thing to cure, to a point. It also sounds like one of those subjects that doesn't get brought up much, in medical checks, or in social settings. One way of looking at Martin Shkreli is that perhaps he wished to draw attention to something?

If Daraprim™ were to go price crazy then what others would follow?

Otc or vet use only anthelmintics? Some of these drugs need close liver enzyme monitoring and people all over the place are using 'em for cancer or what have you.

The whole million per cent price increase thing was odd, and I hope this news means that I don't have to focus on it.

What would a group photo look like if everyone said 'Shkreli' instead of 'Panama's risky'?

Might that be because countless people, from all walks of life, took to Twitter to let Mr Shkreli know that, short of asking the FBI to let him into Witness Protection, that he might start having a lot of bad, bad days? LOL

I agree with VoidHawk here. Very devious. Announce a 5,000% mark-up, let public opinion ignite, wait, then become a "humanitarian" by announcing that you're going to simply double the price...

For me this is a blessing in disguise as it shows the exact reason why so many of us have supported the idea of a single payer universal healthcare system for years now. Healthcare and playing the stock market should never work the same way. For all the BS about "death panels" that we had to suffer through during the ACA debacle - this type of thing is much, much more dangerous. Imagine your doctor saying "Sorry, you cannot receive treatment because treating you doesn't best serve the shareholders."

How much is the rollback? ....How close to the old price? (Not the new price.)

originally posted by: Chimney
It's such a large spike--too large. He couldn't have gone into it not expecting backlash. Makes it seem like a pointless move made for who knows what.

Perhaps it shows how completely out of touch with reality is the average Wall Street cretin? How completely void of empathy?