I don't know how that reply was to you, but I was attempting to give the OP a compliment, as she's clearly a very good artist.

originally posted by: kaylaluv
Wow - terrific stuff! It took me a few seconds to see it was Alec Guinness, but I recognized Cat Stevens right away (I'm old enough to remember his songs).

Yay! And yay for those of us old enough to know Cat Stevens' music. His work has never lost its magic for me and I just got sucked in to watching videos for a few hours. To this day, the album Mona Bone Jakon is reference music I use for judging audio equipment. I've got all his stuff, some only on vinyl.

Of particular significance to this 15 year old kid that was going through a LOT of troubling stuff in 1970 was the song Father & Son and this verse:

All the times that I've cried
Keeping all the things that I knew inside
It's hard, but it's harder to ignore it
If they were right then I'd agree
But it's them they know not me
There's a way and I know that I have to go away
I know I have to go

Those that are familiar with the silly things I've been through in my life know that who I was did go away!

I also searched to see if I could find the photo I based my Obi Wan drawing from but only found a partial. There was still a long to go on this one and a lot of things to change but I was starting to get there. 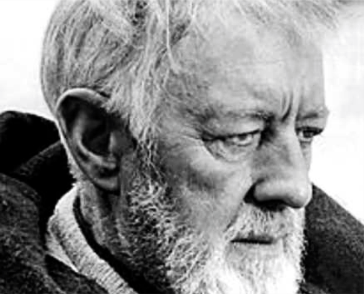 Thanks again, everyone! (and Domo1, I got what you were saying -thx!)

posted on Oct, 14 2015 @ 01:50 PM
link
Unfinished work usually shows more about the person then it does the image. I like seeing the processes nice work