page: 1
23
<<   2 >>
log in
join
share:
EKron
+8 more
posted on Sep, 17 2015 @ 11:42 PM
link
Inspired by TechniXcality's recent art thread, I said to myself "why not"? I pulled some stuff out of the wayback machine, some of it damaged or wrinkled and most of it unfinished but all of it is close to thirty years old or older and hasn't aged too well unlike me that's still only 12 inside! Haha!

I've doodled and made drawings all my life but also have always liked typography and advertising art and in the early 90's mostly went digital and have a portfolio of business graphics, brochures, flyers, newsletters and ads that have been published. Most of the artsy for fun digital stuff I do is vector but I'm thinking hard about getting a graphics tablet and branching out.

I can't share anything more creative I've done in the last four or five years because it might expose my "secret identity" and in other venues I don't want to be linked to the things I've posted here but I am pretty proud of my recent artistic endeavors. These are all pics I took with my phone and aren't exactly great.

I'll start with one of my favorite pencil drawings. Unfinished, of course, but it got poop on it and there was no way to save it. Maybe you recognize this guy? 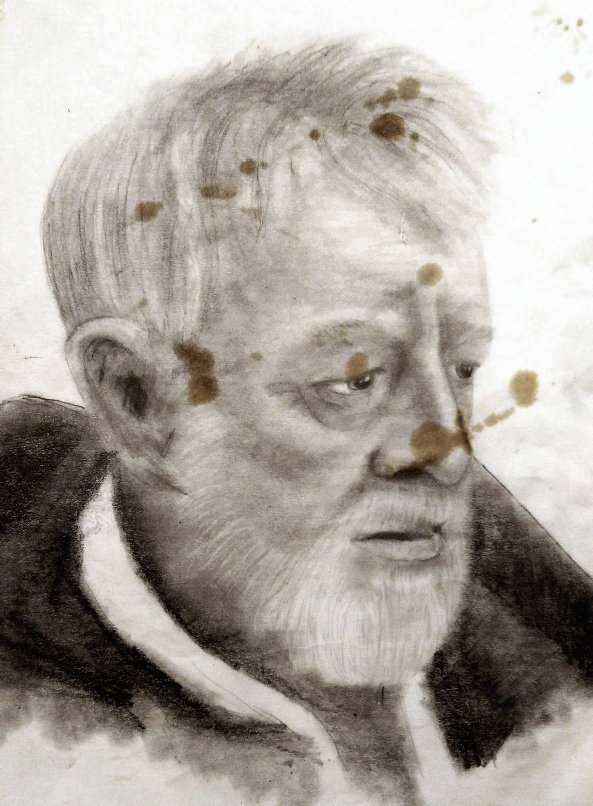 Oh geez! Most of what I'm posting is unfinished but here's one that would have been good if I had. It is oil pastel crayon on tracing paper and the wrinkles don't help. No, it's not Mohammed, but it is one of my all time favorite musicians that did convert to Islam. Any guesses? 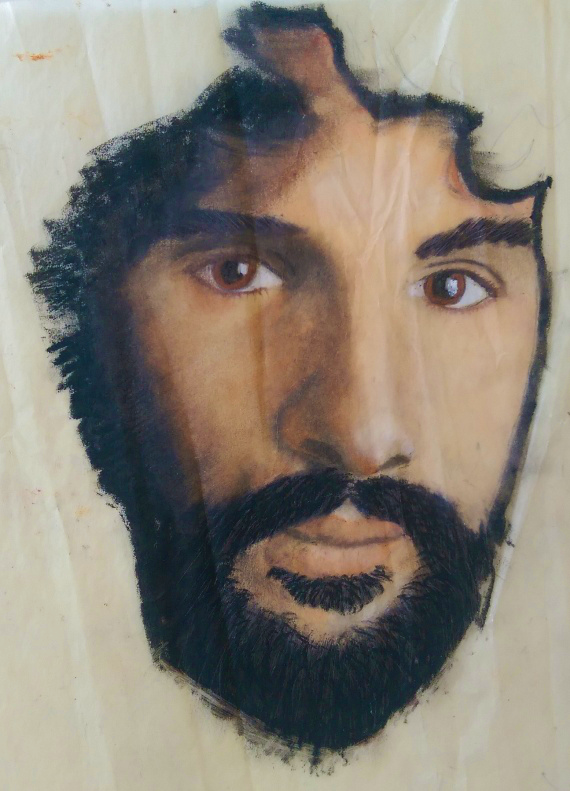 Here's another oil pastel on tracing paper that didn't get too far but you can kind of see how things come together. Pastels on tracing paper works great because you can blend, scrape and scratch it easier than regular paper. Wish I'd taken better care of this stuff. 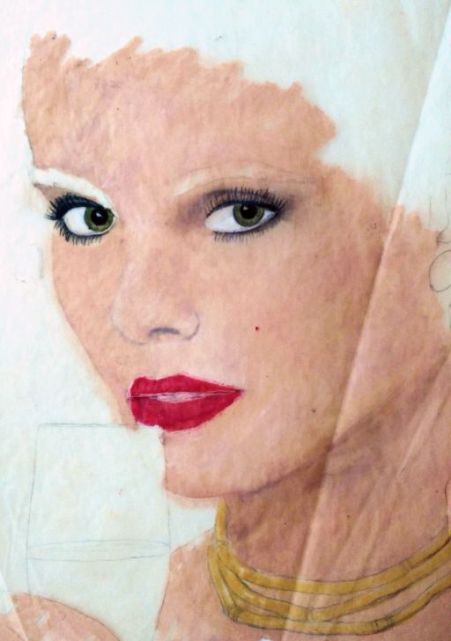 I have a lot of other color stuff but none really appropriate to post so I'll share some of my black and white stuff done with technical pens and ink. I'm using Staedtler MarsMatic 700 pens that are a bit finicky to keep clean even with special solvents and such. I thought about buying another set because mine are well worn but much to my surprise, I looked them up on Amazon today and they're a hundred bucks for a set of four! I ended up buying an ultrasonic cleaner instead to de-gunk the tips. Neither of these two were considered finished when I quit working on them out of frustration from several mistakes. The shading was done with pencil and these are big. They're on 17x14 inch paper and I had to reduce them a lot to post them. They're still okay and crosshatch is still a lot of fun. Both were sketched from pictures in magazines

Hope you liked? I thought it might be nice to post something other than my usual crap?

Never mind the mistakes, just keep drawing. You do a great job!

I don't really value technique - what I like is the expression of it.

eta: I didn't mean your technique but everyone's technique in general. Yours is good.
edit on 9/18/2015 by Bleeeeep because: (no reason given)

originally posted by: Bleeeeep
a reply to: EKron

The two ink drawings I drew by hand from photographs in a magazine. Probably Cosmo because I used to read it way back then. I used crosshatching because it's fun and kind of hard to do, takes a long time and was what I wanted to do. I also liked the contrast between that and doing pencil shading and blending for skin. It's just a different style. I've done plenty with just pencil and colored pencil too. If I copied anything it was some old time style or woodcut or something?

It's a lot of scratchin' out little lines. Here's closer up views. I'm probably not even doing it right? 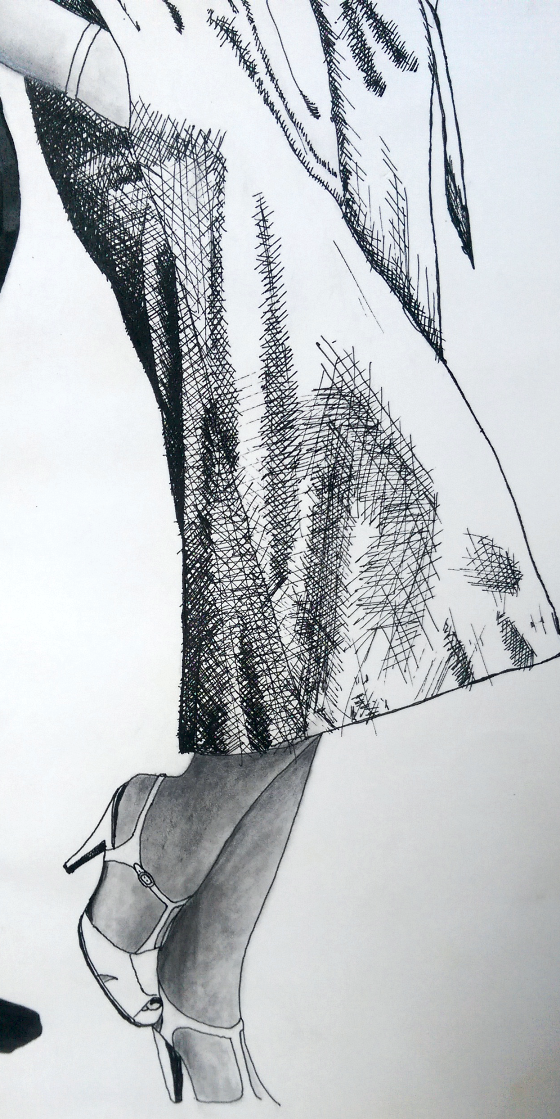 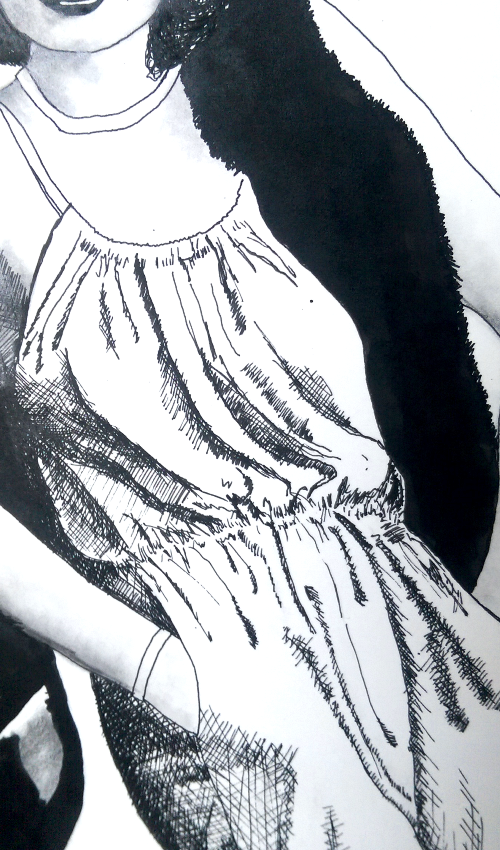 The chair and the guy standing behind the woman were outlined with pen (or pencil) and then some of the special $11 bucks for 23ml drawing ink flowed in and spread around with a paintbrush so it is kind of like watercolor. With a .35mm tip, or even the .5mm big one, it is almost impossible to make a large solid area. Keep in mind, these are all phone pics and I did adjust brightness and contrast a bit to make them look better so some of what you see on the screen isn't necessarily how they look on 30+ year old paper.

Kind of hard to see but here's one I started and never got too far on. Magazine page taped to the left side, drawing on the right. 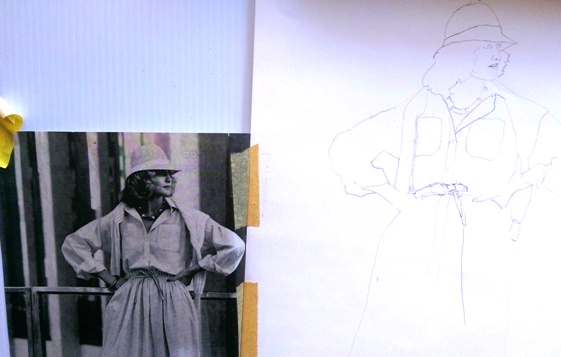 Oh, and thanks everyone for the feedback! That's very kind.

posted on Sep, 18 2015 @ 01:30 AM
link
Very nice well done. Shame you not make more all this time, imagine how much more amazing you would be. I'm very impressed. Always keep creating it make your soul stronger.

The first two guys are real identifiable people. One was an character in a movie who taught Luke a thing or two and the dark bearded fellow a very popular musician that gave up his life as a pop star to follow his faith after he finally figured out what faith he wanted to be. His name is now Yusuf Islam. His first name used to what we call small furry animals that purr.

All the others are just anonymous people in magazine pictures I liked. The woman in last one I posted where I'd just begun the outline is from a Woolite advertisement!

You got some talent there. No matter how hard I try pencil shading, I don't come close to getting the drawing close to a black and white replica of the actual image.

So clearly your art skill is superb!

posted on Sep, 18 2015 @ 03:39 AM
link
Oh gosh! Thanks everyone! Some of my stuff is okay but I never expected such positive responses. It's almost a little embarrassing which is funny to say since 99% of my posts have been about very personal and intimate details of my life.

I have a lot of other creative and artistic pursuits. I'm on the verge of ordering a third high end airbrush as that's what has really been floating my boat the last few years and I also have a vinyl plotter I've done some neat things with. Much to my dismay, other than my off-key singing to myself, making music is not one of my talents but it is something I love dearly.

This is all about balance for me but I'm not an artist. I work with tech and servers and networks as a small business IT consultant and have a lot of geeky stuff and worthless facts stuck in the other half of my brain. I wouldn't be able to stand what I do without plenty of outlets for my creative side and I'm always coming up with something new and developing new talents to keep it interesting. I even made very unique dollhouses and unusual funky sculptures for a while and in the unlikely event I ever retire, hope to find something fun to do that maybe brings in a few bucks.

posted on Sep, 18 2015 @ 08:22 AM
link
Wow - terrific stuff! It took me a few seconds to see it was Alec Guinness, but I recognized Cat Stevens right away (I'm old enough to remember his songs).

originally posted by: Domo1
a reply to: InnerPeace2012

I made an honest comment, about the beautiful piece of art, clearly you have some issues. Try drawing sometimes that should help cool you down

The OP deals with servers so do I by profession, art work comes as a hobby..