why do Police "have" to shoot to KILL every time ??

posted on Aug, 16 2015 @ 03:21 AM
link
not talking about the 10% citizens who are trainee Jason Bournes, that need instant vaporising. but 90% average criminals do NOT need to be shot in the chest or back (which frequently kills). a running (or advancing) crook would only need a couple of shots round his feet or into his leg to stop him. and why not use Tasers much more frequently ? the answer is LACK of police training, always aiming for the chest is not necessary. they should calm down and try stepping BACK for a bit of thought and aiming. but the prevalent SWAT attitude is the opposite to rush forward and kill kill. not good Police Procedure. "criminals" are not usually hardened killers themselves. more likely homeless guys struggling to survive who have gone astray under all the stresses in society driving them to minor theft and drugs.... Police should show more compassion for such vagrants. be firm yes, arrest them for treatment, but no need to kill them all.... police need more ATTITUDE TRAINING.

why do Police "have" to shoot to KILL every time ??

Rather be judged by 12 than carried by 8

No such thing as shooting to wound if you draw a gun and fire you kill them. Shoot to wound can get an officer killed. If you want to argue there are situations where they shouldn't shoot that's fine but to say they should only wing them is silly.

crook would only need a couple of shots round his feet or into his leg to stop him.

Pretty good with a handgun against a moving target, are you?

originally posted by: MasterKaman
a running (or advancing) crook would only need a couple of shots round his feet or into his leg to stop him.

You obviously get your "knowledge" of guns from tv and the movies!

Hint:- In real life firearms are nothing like the movies!

originally posted by: MasterKaman
not talking about the 10% citizens who are trainee Jason Bournes, that need instant vaporising.

That's the problem. Some people (including the OP) want the police to shoot (alleged) criminals and act as judge, jury and executioner. If you accept that, then you need to accept that some people being shot will be the "undeserving".

Why not accept that the police should shoot no one and then modify behaviour from there.
edit on 16/8/2015 by paraphi because: (no reason given)


Why not accept that the police should shoot no one and then modify behaviour from there.


Um. Shoot no one? Really?
Just stand there while being attacked? Pepper spray someone with a gun?

See the sig quote for the answer... 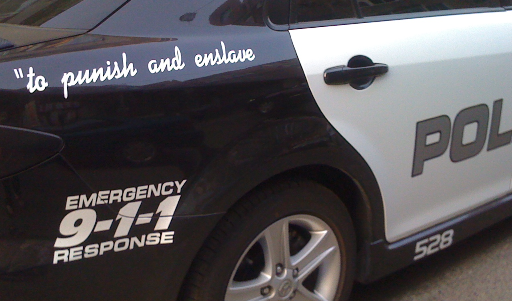 
>>The only reason to use a deadly weapon is to kill.

** NO. you use a chainsaw to cut trees. a pot of boiling oil to cook lunch. brains dealing with invisible high voltages.

a thousand examples where skilled trained people control dangerous forces and situations without PANICKING and blasting every "enemy" in sight. if you are in a war, then shoot to kill, but police are SUPPOSED to protect and maintain the PEACE in civilian circumstances, not shoot a driver in the head because he pulled away !! violent azssholes. you have had a LOT of training with firearms, yet still you say "i cant" shoot his legs "maybe i will miss". > IF < the runner was waving his own gun, then ok may have to take him down, otherwise NO.

edit on Sun Aug 16 2015 by DontTreadOnMe because: fixed quote tags

If you assume - and accept - that police will act as judge, jury and executioner as welcomed by the OP, then you must accept the consequences of that acceptance.

If you assume that the police won't shoot unless they have exhausted all other none lethal options, then surely that's a better place.

If the default is that police won't shoot then that'll go some way to avoid "accidental executions". It works in other police forces, so surely it would work in the USA.

posted on Aug, 16 2015 @ 04:05 AM
link
a reply to: MasterKaman
We are not talking about bad judgement on the part of the police. We are talking about the use of the weapon. Guns are not used to wound. They are used to kill.

If you assume - and accept - that police will act as judge, jury and executioner as welcomed by the OP, then you must accept the consequences of that acceptance.

If you're arguing that police should not carry guns, in the US, where criminals do. Good luck with that.

Indicative of PANIC lack of thought, LACK of skill, and LACK of training. in a war ok, on the streets mostly not ok.
edit on Sun Aug 16 2015 by DontTreadOnMe because: Quote Crash Course

>> No such thing as shooting to wound, if you draw a gun and fire you kill them.

thats what callous murderers do. are you one, but dressed in a smart uniform with no brains to control yourself ?
edit on Sun Aug 16 2015 by DontTreadOnMe because: Quote Crash Course

>> Guns are not used to wound. They are used to kill.

** by YOU it seems. but a TRAINED officer could easily shoot lower and cause submission.

Only if an opponent had a drawn gun waving AT you, need you care not if he dies.
edit on Sun Aug 16 2015 by DontTreadOnMe because: Quote Crash Course

I suggest you read up on how fast an aggressive person can close distance, and also read up on what a bullet can do when it hits concrete at an angle... (hint it's not stop on a dime)

Im the first person to criticize police for excessive violence but when they draw a gun its intended to be lethal. Aim for center mass, always.

I would never argue with this, they should always be aiming for center mass. However, when they decide or feel the need to draw their gun, thats another story.

posted on Aug, 16 2015 @ 05:14 AM
link
Not a handful of times pre 2000 in my old life had I heard of a police officer killing a perp even. You could count the number of times on 2 hands and have fingers left over. What I want to have answered is what changed around 2000 ? If you can answer that , please do tell.
Could it be , the police used to say in a commanding voice , put the weapon down. Now they fire first at so-called center mass , and then say , yeah , he put the weapon down then.
edit on 16-8-2015 by Gothmog because: (no reason given)

>> how fast an aggressive person can close distance,

two bodycam videos come to mind (1) a crazy guy with knife rushing at british LEO, who disarmed him with Aikido sidestep. required bravery to face that, but he was Trained in Aikido, no killing needed. (2) a bit amusing, another maniac with Machete was rushing left and right surrounded by 20 officers who were also scattering, but maintaining surround with dustbin lids as shields. only took 10 mins before one Officer tripped him over, and they all jumped on him, no killing needed.

all british police cars and many officers have guns nowadays, but it is low profile (except machine guns in airports), and the main difference is ATTITUDE. america is on the edge of martial law, usg has equipped police into an INLAND ARMY with a "them and us" AGAINST citizens, expecting Civil War when the Corrupt Bankers finally collapse your Fake Currency.
edit on Sun Aug 16 2015 by DontTreadOnMe because: fixed quote tags