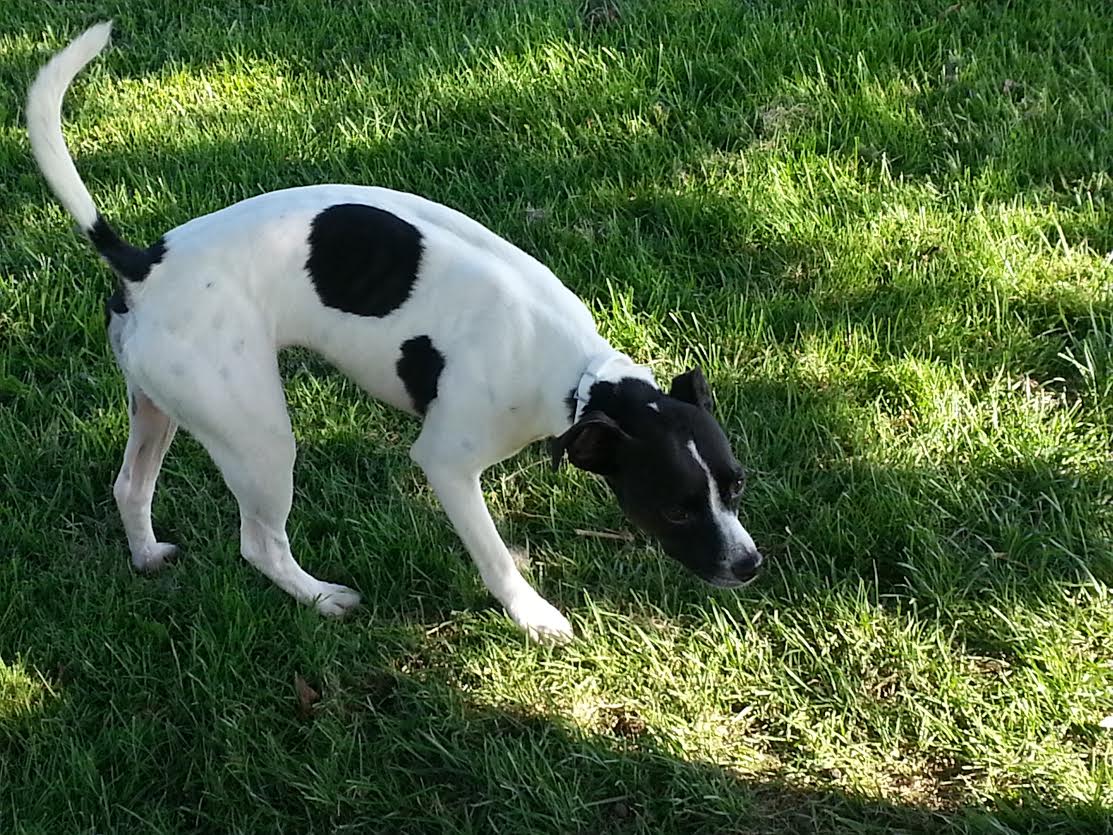 So, I went for a run this morning. About 5 miles in I get a companion. She is friendly and cute, and seems to enjoy just hanging out with me while I run. I figured she would probably run with me another mile or so then head back to her owners.

Not the case. She decided to run with me all the way back home..ten miles roughly, and then I guess decided to stay. I don't mind, she is very sweet and loving. But here is the thing, when you first go to pet her, she cringes as though she has been hit a lot. She has no collar, and she is very skinny, way too skinny. (unless she is supposed to be that skinny)

Trying not to get too involved with her, as it has been only a day and I am afraid to get attached. My mom has already named her, but I told her the only name she could use was "Not my Dog". I gave her a bath, got her a flea collar and I am trying to feed her. She won't eat dog food (wet or dry) and I don't know what kind of dog she is really.

She had dried blood on her, I don't know if she has been eating rabbits or something to survive..just any help would be appreciated.

I guess my questions are..

3. And when is it appropriate to take her to the vet to get checked out? I called the vet, but didn't get any real information, only that I should call the humane society and pound to let them know we have a lost dog, which I did.

posted on Aug, 13 2015 @ 05:34 PM
link
Give her human food. If she does not eat dog food her owner has fed her human food. When a dog has been conditioned to eat that type of food, dog food is yuck to her.

You did all that and the only problem is she won't eat? You have done wonders already and trust me, she will eat. She's just not too sure yet. But her hunger and the goodwill you have shown to her will win. Just leave a little bit of food where she can access it. Stay away from her bowl and give her space, she will for sure eat.

Call the vet right away. Some places take the dog that moment from you. They will also scan her for a chip and check any ear tattoos.

I would guess a lab cross of some sort.

She is beautiful and she obviously trusts your to have followed you home for such a distance, and to allow a bath!

Great job!
Edit: sorry - yes I see you called the vet. Perhaps they don't want to incur the costs of taking her/giving her a check up, etc. But if you're willing you could take her in for a basic check up. I think it would be $85 give or take. She could probably use a good deworming as well. Cost for that about $10 or so.
edit on 13/8/15 by ccseagull because: (no reason given)

Ya if you have any chicken you don't mind sparing, she will probably eat that.

She looks mixed to me with some terrier in her.

Tried some human food, she won't eat that either...I think maybe she has been eating small animals or something. Bunnies, squirrels or something. Because of all the dried blood I washed off her. And I am not feeding her those..lol

Called the vet, they were not very helpful. The next closest vet is about an hour away. Which I am very happy to take her to. But, I want to take her with me on my run tomorrow to see if maybe her owners are somewhere on the route.

She acts as though she has been living with humans.. very gentile and kind.

If I don't find her home tomorrow, I'll take her to the vet then.

and you think she is a mixed breed then?

Doesn't look too skinny from the photo either.
Just young.
edit on 13-8-2015 by CharlieSpeirs because: (no reason given)

Edit: Maybe even 3-4-5 months looking back on old pictures of my dog.

That's if they're a pitbull though.


And when is it appropriate to take her to the vet to get checked out?

Take it to the Vet ASAP...they will be able to answer your other questions. The dog may have ingested something that is preventing it from eating...it could have a bowel obstruction. Seriously...get it to the vet.

They can also scan the dog for a chip. The humane society can also do this for you. IF it has an owner...that's the easiest way to find them.


Trying not to get too involved with her, as it has been only a day and I am afraid to get attached

Sounds like you are in over your head already and so is your Mom. You should talk to her and make her aware that should you accept the responsibility, and the dog has a serious medical condition...it could end up being very expensive....and if your observations about it are true....that it has been abused....the dog will require patience and time to come to trust humans again.

I will take her to the vet tomorrow after I try and find her owners. I just fed her some chicken..and she ate that..so, I guess it is people food for her..

I am not too involved already!

Shes not my dog!

But you are right that I should have her checked out and I will do so..

Waiting on them to download and will have them up shortly..maybe then you can tell what kind of dog she mostly is.

Thanks for the help..everyone..I really appreciate it.

posted on Aug, 13 2015 @ 06:02 PM
link
She'll eat, just give it time. She's like a fish, only much smarter. She won't starve herself to death. You can get her to eat dog food; it just may take some time and you might have to rotate through some brands to find one she likes and fits your budget.

And you really do want her to start eating at least one kind of prepared diet because trying to feed her a nutrient proper diet of people food isn't going to be easy. Dogs need a different balance than people, so it'll be hard to make sure she gets all of what she needs without lots of research and effort on your part if you go that route. Occasional treating is OK though once you get her eating a prepared diet.

Eat in front of the dog and let it come to you...don't put food in a bowl and set it down,let the dog decide in order for it to feel comfortable.
Give her some time and some space and she should come around altogether.
Good luck.

If she's cringing, she's been abused, but I can tell that already just by looking at her body language in the photo. The dried blood could be hers, in that case. If she's been hurt around her mouth area it could be preventing her from eating. My pitbull has broken teeth from trying to chew through the 30lb chain she was on her entire life, and can only eat very soft things. Also, no...she should not be that skinny, but abused dogs are often denied food as punishment too. If they've been starved long enough, their stomachs will not send a signal to their brain that they are hungry, and often they will not eat. I would strongly advise you to take her to a vet to make sure she doesn't have any internal injuries. If she followed you ten miles at a run, you can bet that she wanted away from her environment.

The cringing may never stop...my pit still does it, and she knows I would never hit her. But it'll be less dramatic if you squat down to pet her and reach your hand out to her from under chin level...it's less threatening that way, and with patience and time she may drop the behavior. This girl needs a lot of love and understanding; she has been through a lot. I am an animal communicator and dog trainer...commonly called a "whisperer". If you need help, don't hesitate to send me a U2U. Thank you for saving her...whether you realize it or not, that's what you did, and she trusts you. That is priceless.

ETA: You can feed her a simple meal of baked or boiled chicken and brown rice. That is far better for her than any prepared dog food, and will help her put on weight. I don't feed my dogs anything but food I prepare for them....it is far less expensive than purchasing dog food, and better for them. I season my dogs' food with a pinch of sea salt, fresh basil and garlic powder, which also repels fleas and ticks...I never put chemicals on their skin and they never get fleas. She will not eat, no matter how hungry she should be, if food was used as a punishment. You'll have to coax her.

When we do street rescue, we take cheeseburgers with us, and even the most emaciated dogs will be interested in them. You've got to get her to eat, because they can and they will starve themselves to death if they have been subjected to punishment involving food. It is one of the cruelest forms of animal abuse, and we have to euthanize dogs sometimes because they simply will not eat, no matter what we try. She's not that far gone, so it should be pretty easy to coax her into eating. Try a plain cheeseburger

She's a pretty dog. I think the poor girl's been beaten, from what you said.
Try putting something like gravy or mixing tuna or something like that into her food. She may eat then. Do you know if she has worms? If she's been eating wild food she might have worms, what they call warvels. Squirrels carry them. Anyway, that might put her off her appetite.

Yeah, but I don't want to change her...if that is what her owners are giving her atm. IF I decide to keep her, then I will transition her away to proper dog food. I just wanted her to eat right now. And the chicken worked. Tomorrow I'll take her to the vet and see if she has issues, if not , I already bought five different kinds of dog food for her to try..lol 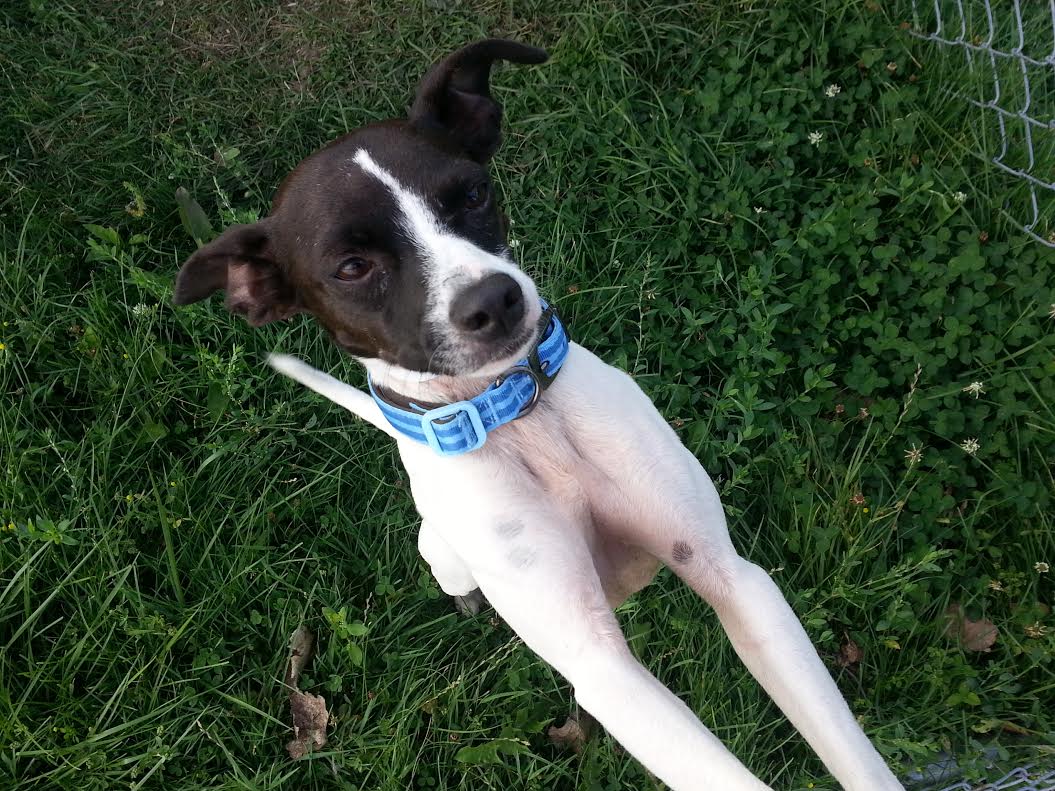 I got more...just waiting for them to download..slow internet connection here.. How many angles/shots would you need to see what type of dog she is?

Don't know if she has worms..But she was pretty happy running with me..didn't seem like she had any issues..bouncing around in the fields, chasing butterflies. Very cute dog.

I guess I'll find out tomorrow at the vets.

originally posted by: blend57
a reply to: CharlieSpeirs

I got more...just waiting for them to download..slow internet connection here.. How many angles/shots would you need to see what type of dog she is?

Not a pitbull.
Can tell by the lower jaw.

I'm with Sremmos now, I'd say some sort of cross breed.