page: 1
24
log in
join
share:
ugmold
+2 more
posted on Jun, 20 2015 @ 09:20 PM
link
A 20-year-old Bernie Sanders leads students in a multi-week sit-in to oppose segregation in off-campus housing owned by the University of Chicago.
Thats all, just thought I'd share. 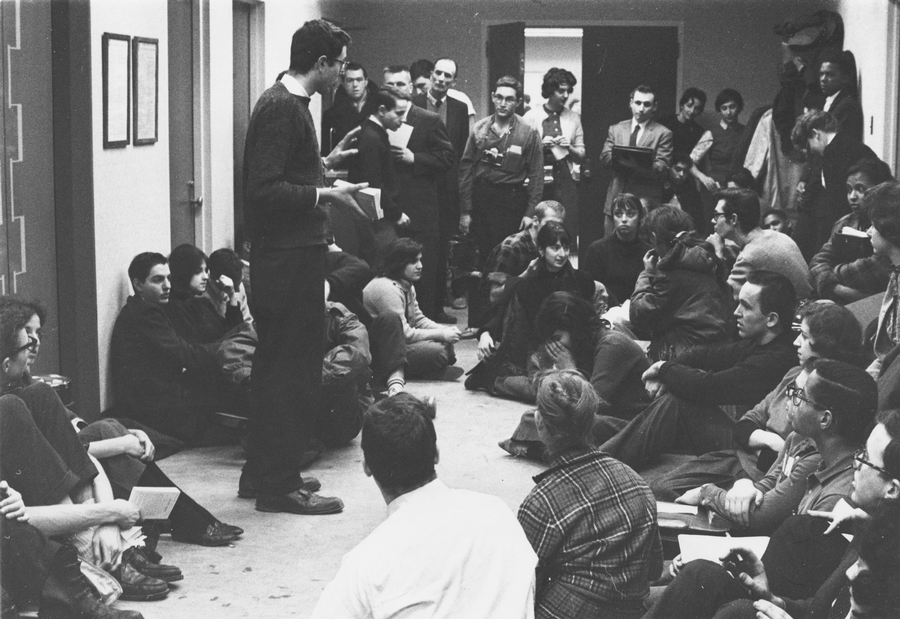 Can you prove it's Bernie?

Can you prove it's Bernie?

I've never donated any money to any candidate...ever.

But I've been giving Bernie something, anything I can afford every month. I want him in a desert needs the rain kind of way. #Weneedbernie

posted on Jul, 10 2015 @ 08:32 PM
link
And on the other side Trump is surging in the polls after saying he'll bomb Iraq and after publicly calling Mexicans rapists and murderers.

But yet people continue to say both sides are the same!

originally posted by: muse7
And on the other side Trump is surging in the polls after saying he'll bomb Iraq and after publicly calling Mexicans rapists and murderers.

What's scary is that there are members here who support Trump, in all his trolling, racist, Elitist splendor.

I have no idea how you can be an Awake citizen, and a member here, and support someone like Trump. But then, I never cease to be amazed by the capacity for stupid hypocrisy anywhere I go.

Bernie is the answer to so many problems, if he can actually get elected, and then not be assassinated before good change can be implemented.

I'm also a bit afraid. He's so perfect...and not long ago, many people had as much hope that Obama was the solution to our problems (I wasn't one of them).

I am skeptical to the max when a US Politician seems too good to be true.

posted on Jul, 12 2015 @ 09:16 PM
link
While its way too early to commit to a candidate, I have to admit I'm pleased that there is a candidate that may be viable in the Democratic Party other than toxic Hillary Clinton.

I like his gun stance he makes sense and doesn't set off alarms. He is inclusive, and doesn't seem to have built up terrible baggage during his years in office.

I need to learn more about his economic viewpoints but I'm sure the coming weeks and months will clarify that for me.

I curious if anyone here is familiar with his stances, I trust you guys to tell the truth way more than any talking heads...education and economic policies should be the most important, even if US elections have turned into soundbyte wars.

I've always felt that if economics and education are properly handled, everything else get less contentious and problems will get solved.

For your viewing pleasure.

He should post that to his election website, I couldn't find anything there.
Thanks for this, I agree on everything he has written there, or at least believe those policies are worth a shot.

No problem! Yeah, his election website just lists three issues and makes them sound as generic as everyone else does. At first I was really turned off because I was like, "Ok what's so great about this guy?"
But yeah, with a bit of research, his magical appeal is revealed. Lol.
I hope his campaign staff knows that most people need easy access - if he wants to get elected.
If he REALLY wants to get elected, he'll keep his points as crisp and clear as on his campaign page, but with the specifics added as on the page I linked you... and he'll do it all on repeat every day in front of a televsion camera.
That's the only way to get a message out these days.

I think once people realize he wants all the "good" liberal bits while still supporting our beloved second amendment rights, he'll get really popular really fast.
Especially when the only other people on the table right now are #ty Democratic option A and Wretched Republican option B.
The fact that he is a registered Independent but not stupid enough to throw away his shot and campaign running as an Independent pleases me. He'll run as a Democrat because the American Plebs only seem to want to vote for an Ass or an Elephant.

Not enough detail for me. I could not locate an actual road map on how he wanted to achieve those 12 policy outlines.

posted on Aug, 9 2015 @ 08:12 AM
link
you know one of the ways i look to see if a politician is just bumping their gums. is how they vote on pay raises for their selves.

On The Issues Bernie Sanders