High quality image files from just-posted evidence exhibits in the Tsarnaev trial by the US Department of Justice show conclusively that the backpack carried by Dzhokhar Tsarnaev in a surveillance video, and the one said to contain the bomb which killed eight-year-old Richard Martin, do not remotely match in color. The US Department of Justice exhibits show that one is black and the other is white.

This is a smoking gun, drawn from the high-resolution image posted at the DOJ website here:

The high-res image is the famous photo of Dzhokhar Tsarnaev standing near the alleged backpack which killed Richard Martin, who is also in the photo. But you can use your browser's zoom feature to see for yourself that it looks nothing like the one Dzhokhar is carrying. One is black and the other is white. Side-by-side images here:

posted on Jun, 18 2015 @ 06:54 PM
link
The first backpack clearly isn't black. If anything, it's gray, but I think that could be from the shadow. I can easily see them being one and the same.

Or one is in shadow, and the other is in light.

There is a pretty significant difference between the way something appears when it is low down to the ground, near everyone's feet, and how it looks when hoisted onto a shoulder, for everyone to see.

Judging by the shape of the bag, and the spacing between the various panels and zips, I would say its the same pack, just under vastly different lighting conditions.

not the back pack again, there are plenty of threads that shot down the white patch.

posted on Jun, 18 2015 @ 07:10 PM
link
The FBI released a photo of Tsarnaev leaving the the scene, allegedly without the backpack used in the bombing.

The photo appears as though Tsarnaev is indeed wearing a backpack, that seems to have been "photoshopped out of the picture.

So this story would coincide with the truth that appears to be, he was wearing a different backpack the whole time, and left with it on.

Not. (I even said that in a Borat voice)

You would think if the government is going to spend all this money on a false flag like this they could find somebody who is halfway decent with photoshop.

(Oh, insert your own sarcasm tags when reading this)

Dunno if the link will work or not (somebody let me know) but I think that makes it fairly clear that the grey backpack looks pretty freakin dark when it's in shadow.

originally posted by: admirethedistance
The first backpack clearly isn't black. If anything, it's gray, but I think that could be from the shadow. I can easily see them being one and the same.

The backpack on the left is black with what looks like a white strip on the top, where the zipper would be. It is clearly not white backpack he is wearing. There is little shadow, the white in the sneaker near and the white of a leg show up just fine. Also if you look at the video of Tsarnaev just before the second explosion, he is always behind the tree, looks like a good four feet behind where the backpack is dropped near the rail, which is in front of the tree. How does he reach out his arm with 30 pounds, without strain, and drop the backpack 4 feet in front of him. Again, note he never moves from BEHIND the tree.
edit on 18-6-2015 by Munkle because: rephrase
edit on 18-6-2015 by Munkle because: spelling
This sequence starts at 3:38 in the official video compilation: www.youtube.com...
edit on 18-6-2015 by Munkle because: detail

He never admitted it, his lawyer admitted it for him. He never said a word in court, after 2 years in isolation, and never allowed to talk to his lawyer without the gov. sitting right next to them listening, under SAMs (Special Administrative Measures.) His friends said he wasn't acting anything like himself. I think he was drugged or brainwashed.

watch from the 3:36 mark to the 7:50 mark. at the 3:43 mark you see your boy walk up with the backpack slung over his right shoulder, walk up beside the tree, you see at 3:44 and 3:45 mark his right arm goes down and he no longer has his pack on his shoulder. then all through the video you see him with out it. the at 6:49 mark he gets a call and you see him answer it. he talks about 20 seconds going by the counter in the bottom left hand corner, call starts at about 4:48:46 lasts until about 4:49:08. at 4:49:25 the first bomb goes off, he then beat feets it looking back a couple of times. you can clearly see that he has no back pack. so the picture you show with what ever that is, is just plain old apologist sympathizing horsesh@@. at the 7:55 mark right where he was standing the bomb goes off. pretty damning in my eyes. but i'm not a sympathizer, so you will just say it's bs.
My Post in the other thread

but there will all ways be some that say it is edited to make him look guilty. all i can say there are None so blind as those that will not see.
edit on 18-6-2015 by hounddoghowlie because: put my post in quotes

I like to pretend people who think everything that's a conspiracy aren't just really dumb, really gullible or both. I like to think that they have such a hard time believing others are capable of such atrocities that they fabricate some cabal of evil and powerful puppet masters.

For the love of god, please.

posted on Jun, 18 2015 @ 08:30 PM
link
He wasn't too shocked when the first one that went off, but he sure the hell knew he needed to get away from the spot he was at, unlike everyone else trying to see what happen...plus both started with backpacks and didn't have one as they ran away...hmmm

right on i soon as he walked up he drops his back pack next to the tree. then he walks away too fast after the first explosion. And as soon as he is clear the second explosion goes. off i wasn't sure they did it till i say this video. Why was he separate from his brother.

originally posted by: Shamrock6
a reply to: Munkle

I live in Boston I know that tree, go to Google Earth and judge the distances for yourself. But for the sake of argument let's call it three feet. The bomb was a Fagor Elite 6 quart pressure cooker which is 9 lbs. empty. That would make about 20 lbs. filled only with water, which weighs about 2 lbs. per quart, but this was filled with explosive and lots of steel. So it is reasonable to call the weight of the bomb 30 lbs. BTW, the way Tsarnaev handles his backpack, slung loosely over one shoulder, and sauntering with no strain, is not consistent with a 30 lb. backpack. For an experiment put two 15 lb dumbbells in a backpack and lift it. Put it on. He is not going to be able to move this with "a swift nudge with a foot."

I don't know about nudging it with my foot, as I didn't try, but the weight itself isn't an issue.
edit on 6/18/2015 by admirethedistance because: (no reason given)

What is google earth going to show me about how close he was to the tree?

Are you seriously going to sit there and say you don't see him edging closer and closer to the tree? Seriously? When he first arrived there's a clear gap between him and the tree. Little by little that gap closes. He goes from one side to the other to dead on, and then back and forth some more. All that moving and you don't think he could possibly have managed to move the bag at all?

My experiment was as follows: I carried a 90 lbs ruck over long distances any number of times. I was able to move said ruck with a kick on several occasions. I also carried several lighter weight rucks and the ones I tried to move with my foot, I was able to. Given several minutes I'm pretty confident I could move a 30 lbs bag pretty much wherever I wanted to in a confined area. Especially if nobody was paying a lick of attention to me.

Oh, and I could find anything to support the whole 9 lbs thing for the device. Every spec I saw said anywhere from 7.4 lbs to 8.

I don't know about nudging it with my foot, as I didn't try, but the weight itself isn't an issue.


I don't believe you, unless you are built like a football player. The easy answer is for everyone to try this for themselves, and then watch the thin, 5'10 or so Dzhokhar with his thumbs hooked in his pockets, plenty of loose sag in the backpack, walking the hood walk shoulders rocking easily up and down. www.youtube.com...

They ain't no 30 lbs. in that bag. Look at the sag, it looks like he has a ham sandwich and a spiral notebook, not one of these, a Fagor Elite 6 quart, which would stretch the fabric: 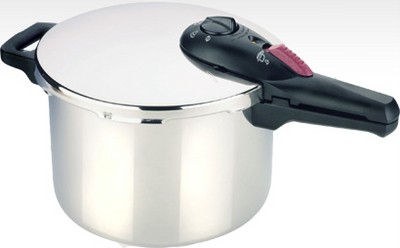 posted on Jun, 18 2015 @ 11:16 PM
link
I ride to work on an electric bike, and when I get there I take the battery and put it into my backpack(which weighs exactly 29 pounds with everything) and walk into work. It takes 7-10 minutes to get where I'm going, and after the first time walking in I had to buy a backpack with wheels, so it wouldn't kill my back. I'm 6' 4" and 220 pounds, when I wear the pack with one strap it makes me walk funny, because the weight is pulling on one side and backwards. You can clearly tell that I have something heavy in my pack.

Point is that little guy would have been struggling to walk normally with that much weight on one strap.