Walmart - which some think operates on such a slim margin - and whose employees are subsidized with enough money to LIVE ON by the US taxpayers.....
So. Here's what they do.

(Here's the report itself)

The report notes that the company's “use of inter-company debt permits it to avoid taxes overseas. It strips earnings out of higher-tax countries by taking out inter-company loans and pays interest to itself in tax havens where the interest income is taxed lightly or not at all.”

Altogether, the report estimates that 37 percent of Walmart's total assets exist within shell companies that are parked in overseas tax havens, including 90 percent of the assets in Wal-Mart's international division.

I'm so tired of hearing how put-upon they are, how they can't afford to pay people a living wage......
what a CROCK!

Just wanted to share with you all - Walmart has been one of the examples of the mega-corps that are scamming the US taxpayers - and boy, do they have a sweet scheme, eh?

I'll be pleasantly surprised if many ATSers have even heard of Luxembourg (hint: it's near Belgium) - a tiny country of only half a million people or so - and the world's HIGHEST GDP. Very interesting.


As a representative democracy with a constitutional monarch, it is headed by a grand duke, Henri, Grand Duke of Luxembourg, and is the world's only remaining grand duchy. Luxembourg is a developed country, with an advanced economy and the world's highest GDP (PPP) per capita, according to the United Nations in 2014.

Luxembourg is a founding member of the European Union, NATO, OECD, the United Nations, and Benelux, reflecting its political consensus in favour of economic, political, and military integration. The city of Luxembourg, which is the capital and largest city, is the seat of several institutions and agencies of the EU.

Mmmmmm. Indeed. A central European country - tiny little country - with impressive stature in the Global World Order. Why would they do this to the US? Who the hell made up these rules that Walmart could hide their money there? Or in all the other places they do the same thing without even doing business as a retailer...

Do you guys think this is okay?
"It's nothing personal," one might say (with a resigned sigh). "It's just their business model."
But, well, it is pretty "personal" when YOUR taxes and MY taxes (which we reluctantly pay because we are good citizens) are going to feed Walmart's employees (of which there only ever seem to be two on duty in a 15-aisle check-out area, and the rest have no idea what to do when you need 'help'), while the Walton family chuckles over their brandy and cigars in front of a cozy fireplace in a luxurious European hidey-hole.

This makes me livid.

Americans for Tax Fairness concludes the report by asking the European Commission to review Walmart's status in Luxembourg, questioning if the country's deals with the company amount to illegal state aid. It is also requesting the Internal Revenue Service to audit the company's use of overseas tax havens. Finally, it is asking the Securities and Exchange Commission to probe why Wal-Mart has not been disclosing its overseas tax havens in its U.S. tax filings. 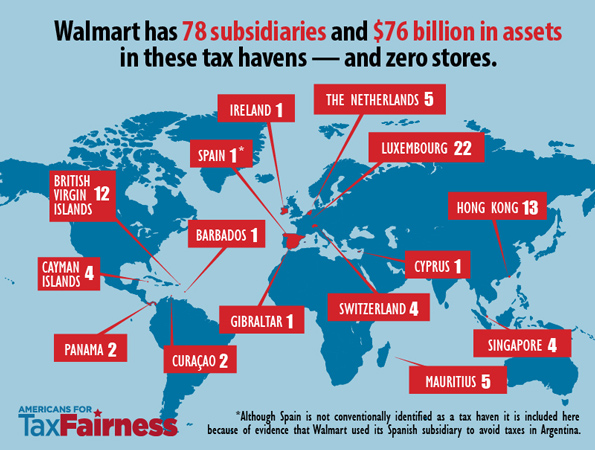 They don't even have STORES in those places!


I hadn't heard of Americans for Tax Fairness before, but I'm behind them all the way at this point.
Thoughts?

I think it's a damned shame. Huge corporations get away with this BS while us small businesses are saddled with overreaching burdens.

But guess what? People vote with their wallets and the last time I checked, the wallmarts and mickey dee's of the world, are doing pretty damn good!

They are not just a 'wayward son' - they are vile, corrupt, and inhumane in all ways.

It's called capitalism by proxy, and yes I just made that term up.

The sad fact is that they can get away with it, there is no law stopping from doing so and the moment that their dubious activities are called into question they will have an army of lawyers to defend them.

There is a reason why people are dubious of this wondrous TPP and these FTA's as is gives megacorps free reign to do what they damn please. The NWO is here but it's not the government we should be afraid of anymore. We are now seeing the birth of things like the Pharmaceutical industrial complex and the technological industrial complex. And as the need for Pharmaceuticals and machines start to replace human workers the governments around the world will be the minority.

I do! Same with McDonalds and a plethora of other places. Problem is, there are waaaaaay more people that keep those businesses propped up and it cancels out my not shopping there.

(Not saying you) But all the people screaming about higher wages, or livable wages from fast food or the wallmart type places, don't hit them where it counts.

The NWO is here but it's not the government we should be afraid of anymore.

As I understand it, the TPP is a big fat "no way!" for Americans - and yes, it started back with NAFTA.
There was an interesting discussion on Jon Stewart's show last night between him and Bill Clinton, well worth watching.

It's like an escaped herd of predators - these conglomerates - with NO CENTRAL OVERSIGHT, no fences, and no watchdogs that have enough bite to keep them from these despicable dealings.

If the world is going to continue this way, shouldn't there be a global set of laws? One would think so.

It's like an escaped herd of predators - these conglomerates - with NO CENTRAL OVERSIGHT, no fences, and no watchdogs that have enough bite to keep them from these despicable dealings.

No watchdogs-that is what alarms me.

Self regulation is the worst thing that any government can allow.

posted on Jun, 18 2015 @ 12:45 PM
link
S/F
Perhaps we should start electing the openly bad guys/gals instead of the ones that hAVe a false personae.

The logic is that we need to do the opposite of what we are doing?

Even though we continue to bang our heads against the wall we have not made a dent in the wall yet.

All this talk of raising corporate taxes.

Now we see the results.

The next step is in those trade deals.

Ah, clever! This is the quintessential 'American Way' youve heard tell about. Must be how they keep prices so low. Are they doing anything illegal or just being shrewd business people?

ETA most of their customers pay little-to-no income tax either. Goose, id like you to meet Gander. You two should have lots in common.
edit on 18-6-2015 by Urantia1111 because: (no reason given)

originally posted by: Urantia1111
a reply to: BuzzyWigs

Ah, clever! This is the quintessential 'American Way' youve heard tell about. Must be how they keep prices so low. Are they doing anything illegal or just being shrewd business people?

ETA most of their customers pay little-to-no income tax either. Goose, id like you to meet Gander. You two should have lots in common.


THIS.
Let's cut the bull for a second.
1. Are any of you directly affected by how your tax dollars are spent? Of course not. You pay X% taxes. It goes to this and that and other stuff. Would it affect your wallet one bit if it went to something different? Nope. I suspect everyone here contributes nothing more than a few pennies of their taxes towards Walmart and if the government cut off those few pennies do you think they would cut your taxes by an equivalent amount? Of course not - they'd move it to another expense.
2. Let's say they have to keep everything in North America. Prices go up. Your imagined savings in tax dollars are more than offset by the price increases.
3. Why do you care? More and more I suspect (and the OP's last part about the Waltons adds to this..) that people on this site complaining about the rich are only jealous.

Why do you care? More and more I suspect (and the OP's last part about the Waltons adds to this..) that people on this site complaining about the rich are only jealous.

Are they doing anything illegal or just being shrewd business people?


It should be illegal. That's the entire problem.

It should be illegal. That's the entire problem.


How do you make Luxembourg's (or any other countries) friendly tax rates illegal?

I don't know - but, if corporations are going to be "global", then there should be "global" standards of doing business. In my opinion.

How in the hell is it any different than global "rules of engagement" in war situations? There's a tribunal that is supposed to try ANYONE guilty of "war crimes" - and "crimes against humanity". HOW are the corporations EXCUSED from that scrutiny?

Yeah yeah, I know - Bush, Cheney, Rumsfeld, all of those war-mongers haven't had to 'face a tribunal' - which is appalling enough. But the bankers and business people and 'stock-holders' get away with the slow and sinister torture of people who actually want to work......


Oh well - since the haters have arrived, I'll just let you all carry on ridiculing me and those like me.

Walmart SUCKS. Any person or family who thinks this is okay, and is mooching off of the 'laws', deserves to be shamed out of business.
They are right up there with Jamie Dimon.
bah. Never mind. Corporate tools make me sick.

Sleep well tonight, all of you proponents of these horrible deeds! /sarc (AugustusMasonicus excepted)

originally posted by: BuzzyWigs
I don't know - but, if corporations are going to be "global", then there should be "global" standards of doing business. In my opinion.

I look at it as a zero sum situation. These tiny countries offer themselves as tax havens and eat our lunch. We can do something similar and get our own lunch back and everyone else's.

I would much rather have Walmart, Apple, et al paying taxes here than overseas.

It should be, globally, a NONZERO sum. Robert Wright is the author of a fantastic book entitled NONZERO. If you're interested, let me know and I'll post the link again.

WIN-WIN is what works for everyone.

originally posted by: BuzzyWigs
It should be, globally, a NONZERO sum. Robert Wright is the author of a fantastic book entitled NONZERO. If you're interested, let me know and I'll post the link again.

Please do but I am going to be a very tough sell when it comes to any type of global governance. I think ours is already too big and I shudder at the thought of one that dwarfs this in size and scope.

NONZERO: The Logic of Human Destiny You can find excerpts and so forth on that site.

I'm bowing out now, with one more thought:

THESE CORPORATIONS ARE THE EQUIVALENT OF DEADBEAT DADS.

Now I am going back outside. You all sort it out, and please submit a summary and report of how this situation is just fine and dandy.

I asked for thoughts - so - have at it.
I promise to read every post, and to think it over. I'll be back later.