posted on Jun, 17 2015 @ 12:11 PM
link
Where does this conspiracy theory come from?
What is it actually meant to do?
What's the science behind aliens and tim foil
We laugh about it, but it occurs to me where did this phenomena come from?
Should I unwrap my cats head? 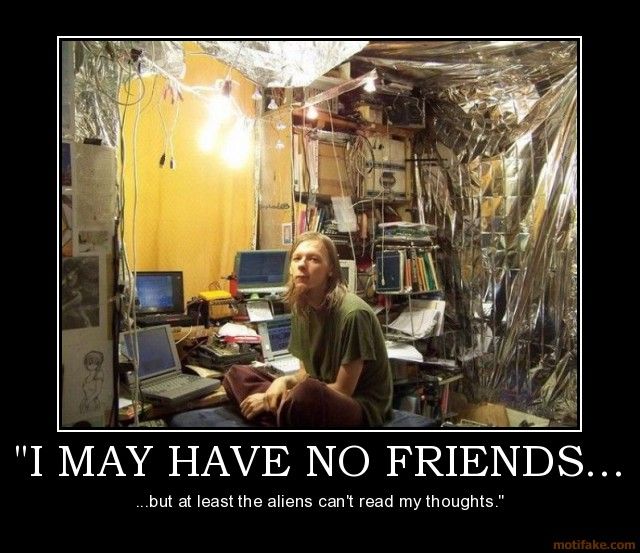 Is there any science on the properties of tin foil, or aluminum foil? I mean as sheets, on a wall or over a window?
I know for me I have used it to make antennas after getting my novice ham radio license.
But then what type of signals do aliens use? Seems we would detect it?

I wonder if anyone who hears voices has ever tried tin or aluminum foil and if it stopped the voices?
Or does it just help block light mostly?

To me I always assumed it was a paranoid person that needed help getting rid of a perceived outside influence.. Aluminum or tin foil being the most common thing in a typical house that someone might think would work to block electromagnetism of some kind..

My next idea was the entire thing was fabricated to make people who believe in the other, the alien, to be crazy.. Similar to how (was it the CIA) invented the term conspiracy theory/theorists, to then connect people of real knowledge to whackos..


I've never tested to see whether tinfoil would be of any use, not that I would even know how to test such a thing, though I imagine a tinfoil hat would have the opposite effect than what is looked for.. A grounded wall of metal on the other hand may prove more useful.

the Word Short circuit pops into my head.

posted on Jun, 17 2015 @ 12:21 PM
link
Observations… Tin foil was used to jam enemy radar, still is. To prevent ripoff utilizing RFID, wrap your iD and credit cards in tin foil. In some circles it is widely held belief that the government is beaming signals all over the earth to manipulate our minds and wearing some metallic shield (like a tin foil hat) can prevent being mind melded. EMP from nuclear weapons is credited for destroying circuits in some weapons tests.


In the movie, Signs, the funniest part of the movie is the kids reading the book about using tinfoil hats to defeat alien mind reading…

where did this phenomena come from?


This phenomenon is a common symptom of the well-known mental condition paranoid schizophrenia.

It doesn't have to be aliens reading their thoughts. I have a friend in England who believes the local borough council is reading his thoughts, and so are the students living in the flat next door to him.

And he doesn't think tinfoil will help, either.


One story states that the tin foil hat has its origins tied into the opposition of freemasonry when it began in 1717. As the story goes, non Freemasons were suspicious of the brotherhood and believed that the Mason were using forms of mind control on them. They began their own fraternity, called the “Mad Hatters” and upon learning about the protective properties of aluminum foil, they created their own hats made of this substance.


The first recorded use of tin foil hats happened in 1927 as derived from a short story by Julian Huxley entitled, “The Tissue-Culture King” in which the protagonist discovers that “caps of metal foil” will block the effects of telepathy”. This was published in “The Yale Review” in April of 1926.


Nope. Aluminium (never mind the foil) was only discovered in the early 1800s.

Here is the movie perhaps you can pinpoint the scene

I liked that movie Shalaman is hit and miss, but with signs i got scared Especially that one scene where the tall alien is caught on video for the first time.

The concept of a tin foil hat for protection against interference of the mind was mentioned in a science fiction short story by Julian Huxley, "The Tissue-Culture King", first published in 1927, in which the protagonist discovers that "caps of metal foil" can block the effects of telepathy.

First a bit of history on the Foil Hat:


The scientific reasoning behind the foil helmet is that it acts as a Faraday cage, an enclosure made up of a conducting material that shields its interior from external electrostatic charges and electromagnetic radiation by distributing them around its exterior and dissipating them. While sometimes these enclosures are actual cages, they come in many forms, and most of us have probably dealt with one type or another. Elevators, the scan rooms that MRI machines sit in, "booster bags" that shoplifters sometimes use to circumvent electronic security tags, cables like USB or TV coaxial cables, and even the typical household microwave all provide shielding as Faraday cages.

While the underlying concept is good, the typical foil helmet fails in design and execution. An effective Faraday cage fully encloses whatever it's shielding, but a helmet that doesn't fully cover the head doesn't fully protect it. If the helmet is designed or worn with a loose fit, radiofrequency electromagnetic radiation can still get up underneath the brim from below and reveal your innermost thoughts to the reptilian humanoids or the Bilderberg Group.

And for added fun:

In 2005, a group of MIT students, prodded by "a desire to play with some expensive equipment," tested the effectiveness of foil helmets at blocking various radio frequencies. Using two layers of Reynolds aluminum foil, they constructed three helmet designs, dubbed the Classical, the Fez, and the Centurion, and then looked at the strength of the transmissions between a radio-frequency signal generator and a receiver antenna placed on various parts of their subjects' bare and helmet-covered heads.

The helmets shielded their wearers from radio waves over most of the tested spectrum (YouTube user Mrfixitrick likewise demonstrates the blocking power of his foil toque against his wireless modem) but, surprisingly, amplified certain frequencies: those in the 2.6 Ghz ( allocated for mobile communications and broadcast satellites) and 1.2 Ghz (allocated for aeronautical radionavigation and space-to-Earth and space-to-space satellites) bands.

Another conspiracy theory shot to hell by science.


No. But tin foil was used in the 1700's. It is arguable as to how early. A dentist records using it in 1783 to fill a tooth. So while the article is debatable itself, it should have read tin foil instead of aluminum foil to coincide with such an early date.

Is there any science on the properties of tin foil, or aluminum foil? I mean as sheets, on a wall or over a window?

Basic assumption is that such "alien mind control" waves would be electromagnetic, so it's based on the idea of how to thwart EM waves.

So they have only tech that pinpoints the skull area
Should my cat be fully encased in tinfoil to be effective ?
edit on 17-6-2015 by zazzafrazz because: (no reason given)


Should I unwrap my cats head? 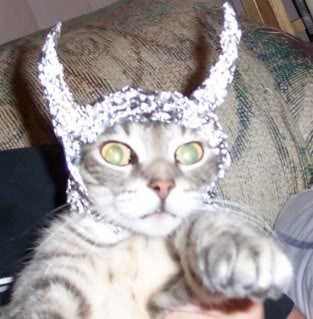 Here is the movie perhaps you can pinpoint the scene

The book scene being the better.

There was this bizarre case involving lead eye masks and UFO's…

See, I have never understood this......... I mean, why would you want to encase your skull in a conductive medium? Why not a superior insulator, if a person is trying to prevent the intrusion of "waves" from "out there"?

Sadly, my efforts to market a ceramic helmet were a dismal failure, despite the colorful glazes. People kept dropping them. No help for it.

Fashionable leverage from the aliens since 1907.